Before my stay at The Black Swan Hotel in Helmsley, I spent the day adventuring in York. Although I was to be eating an eight course tasting menu, I couldn’t bear to miss a meal and so, for lunch, we headed over to Brew & Brownie in York.

Brew & Brownie is a gorgeous little café in the centre of York. Having spent many hours researching and discovering some of Yorkshire’s best produce, the creators behind Brew & Brownie have come up with some beautiful looking plates of food and, of course, great brews and brownies!

Brew & Brownie not only served beautiful plates of food, but the interior is stunning. The white tiling is complemented by fresh purple flowers, big decorative light bulbs and mis-match cushions make it feel like you’ve just jumped in to someone’s Pinterest board…

The coffee at Brew & Brownie

The coffee is sourced from an artisan roaster-y in the Lake District called Carvetii Coffee and the flat whites are done to perfection; something I never quite managed myself during my days as a barista!

A review of the food at Brew & Brownie

Having worked up an appetite after exploring York and climbing the castle we opted for an Eeh Bah Gum board (a selection of Wilson’s award winning pork pie, roast ham, roast beef, Wensleydale, Yorkshire Blue, the day’s cheese, piccalilli, chutney, salad & York artisan bread) and a club sandwich served with homemade potato salad.

We couldn’t possibly go to a place called Brew & Brownie without sampling its namesake. So, although a little bit full, we soldiered on and chose two different brownies, a Crunchie brownie and an Oreo brownie (it’s well known that Oreos make everything better!).

We headed to the green by the Cathedral of York Minster and ate our brownies whilst the sun shone.

Sometimes brownies that look good can be a bit disappointing. It’s easy for brownies to taste a bit dry and just fall to pieces. Not these brownies! These were the fudgiest, moistest brownies I’ve ever had. I wish I knew their secret so I could recreate just how good they were!

If you’re ever in York and need a place for lunch or a quick coffee, then head to Brew & Brownies. I promise you won’t regret it! 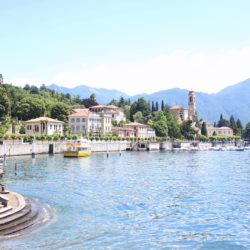