Dracula & Romania | A Weekend In Bucharest

A little over a week ago I travelled to Bucharest for the weekend. As the capital of a country that inspired the much loved Dracula tales, Bucharest is a pretty awesome place to spend your Halloween. This is especially the case for those of us from the UK, where not much is done to celebrate the holiday (especially when you compare our efforts to those of the Americans). But, ignoring Dracula, Romania is known for its beauty and Bucharest, in particular, for its historical charm and huge, beautiful buildings constructed during the country’s Communist rule.

But Bucharest isn’t all about Dracula. In fact, their tourist campaigns stay away from Dracula altogether. They’re not a fan of the Dracula that we all know. I am of course referring to the Dracula made famous by Bram Stoker’s novels, the one that’s inspired many a scary film.

The other Dracula, the real one, was Vlad III from Romania who fought against the Turks. He reduced the crime rate by feeding people to goats and impaling them on stakes. To Romanians he’s a bit of a hero. So you can imagine having a national hero compared to a flesh eating villain isn’t exactly going to keep the Romanian’s happy.

Nonetheless Bucharest, a country that’s cheap to get to and cheap to explore, still makes a fun place for some Halloween festivities. There’s decorations outside bars and a scary 5k run. Although, come to think of it, I didn’t see anyone dressed as Dracula (Stoker’s one)… 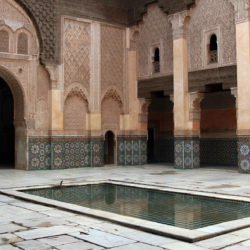 previous post
Autumn Arrives In Borough Market
next post
The Transfagarasan – The Most Beautiful Road in the World?