How to find cheap flights everywhere (but especially Canada!)

Do you want to know one of the things I miss the absolute most about living in the UK? The cheap flights. Gone are the days where I can get a return flight for £30 ($53CAD) to an entirely different country with a different culture just for the weekend. Instead, they’ve been replaced with return flights for hundreds of dollars where I’m only a few hour’s drive away from where I started. And to get from Vancouver to Toronto often costs more than it cost us to get from London, UK to Toronto.

Sure, I get that Canada is huge and flying is going to be more expensive but sometimes the flight prices seem insane. That is until I figured out how to go about finding cheap flights from Canada. These tips for finding great flight deals work no matter where you live, but there are a few extra tips thrown in if you’re looking for budget flights from Vancouver and other cities in Canada. 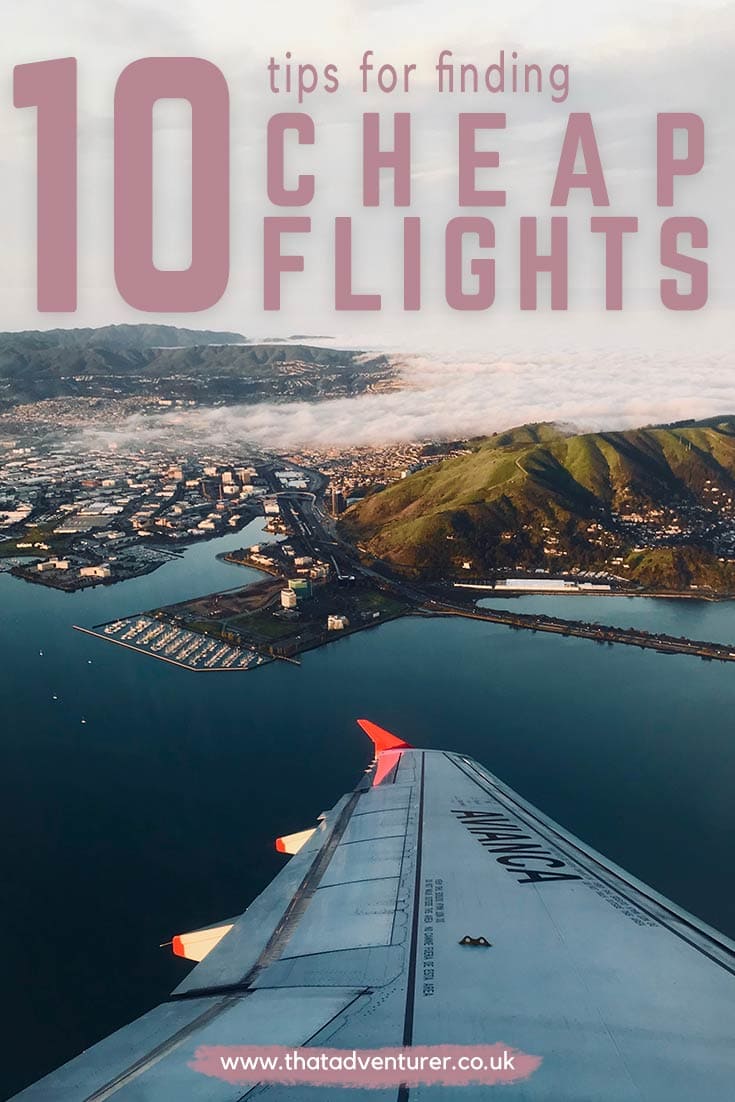 A few of these things I’ve been doing for absolutely years, it’s how I afforded to travel so much when living in London (see more in my ebook) and a few are new to me. Try and use at least a couple of these tips for finding cheap flights next time and you’re sure to save some money.

I’ve recently joined Dollar Flight Club and I’m completely blown away by the deals they manage to find. Plus, they have new ones every day! I wasn’t sure how good their deals were actually going to be (especially from Vancouver) but they’ve impressed me no end.

If you haven’t heard of them you’re going to be almost as excited as me when I found out about them. Dollar Flight Club has over 500,000 members who all want to travel for less. They find super cheap flights (on average you’ll save $500!) and send you an email to let you know the destination and dates you can get this super cheap deal.

For example, the other day they told me that I could fly to San Diego from Vancouver for just $222. Usually, that costs at least $400! I also signed up to hear about deals from Seattle since there’s often more cheap flights from Seattle than from flying from Vancouver. I have to say the deal from Seattle to Tokyo for just $408 was VERY tempting (savings of $542!).

The Dollar Flight Club Premium Membership comes with a free 7-day trial when you pay annually ($40 a year). You’re not charged until after the trial is over so you’ll have a whole week to see if the deals work for you.

Honestly if you sign up to Dollar Flight Club you can pretty much ignore everything else on this list (but I’d probably still use an incognito window personally) since they’re finding the flights for you. All you need to do is choose your date and book. However, this does rely on you being flexible with destination and dates. If you’re looking for flights for a specific place and date then the below tips will be super useful for finding cheap flights.

Search for flights in incognito 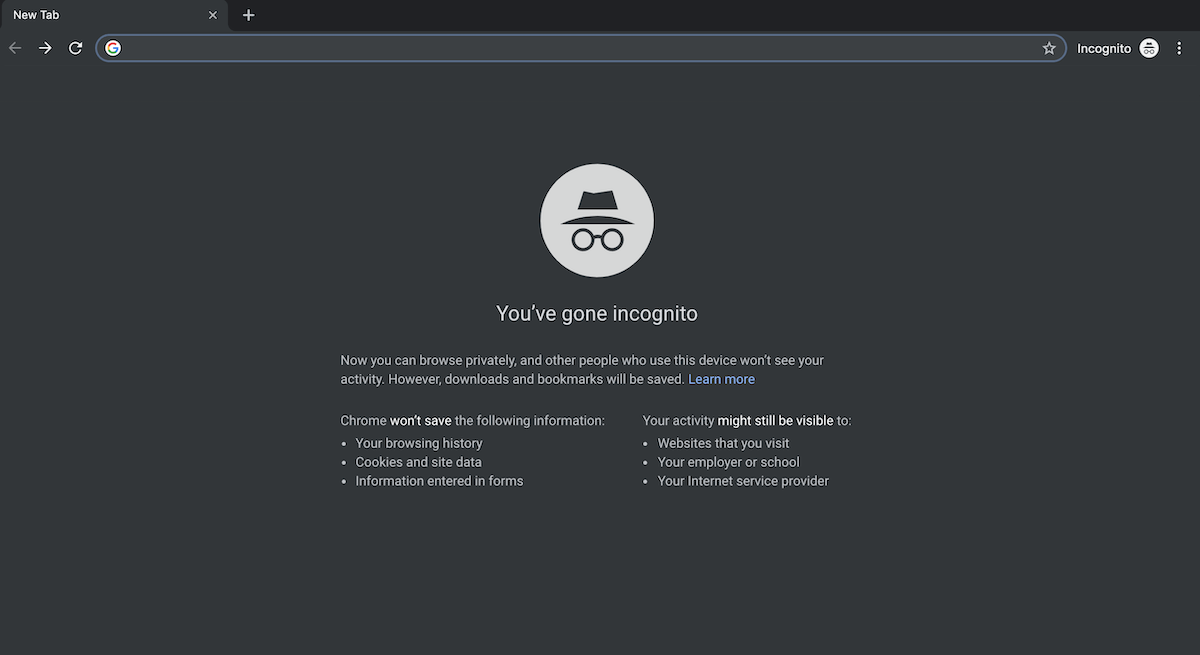 Ever been looking for flights and the more you search the more the price has increased? Yeah, same. And whilst there’s actually no real evidence that airlines and flight search engines increase the price the more you look, everyone I know has a story where this seeming to be the case.

It’s believed that what causes this is the ‘cookies’ that are placed on your browser. They can track your searches and when they’re doing this with everyone searching on their site, they can put the prices of the most popular dates and destinations up. But there is a way around this and it’s very, very simple…

Search for cheap flight deals in an incognito window. It’s what everyone should do when they begin to look for flight deals.

How to use incognito windows to search for flights

This then opens a new window in your browser and this doesn’t allow cookies to track you.

Cookies are reset every time you re-open an incognito window. This means you’ll want to close and reopen your incognito window fairly regularly (ideally after every flight search) so that your cookies are gone and your searches aren’t remembered.

Use the best flight search engines for cheap flights

There’s no one flight comparison site that’s better than all the others, unfortunately. If you’re serious about finding the cheapest flights you’re going to want to check a bunch of them just to make sure that one hasn’t missed out a great deal on flights.

One thing to bear in mind is that a lot of budget airlines aren’t on these flight comparison sites.

Be flexible to find cheap flights

I know not everyone can be flexible with when and where they travel and the tips below will still be useful. But, if you can be flexible then definitely make the most of it!

Remember to check budget airlines too 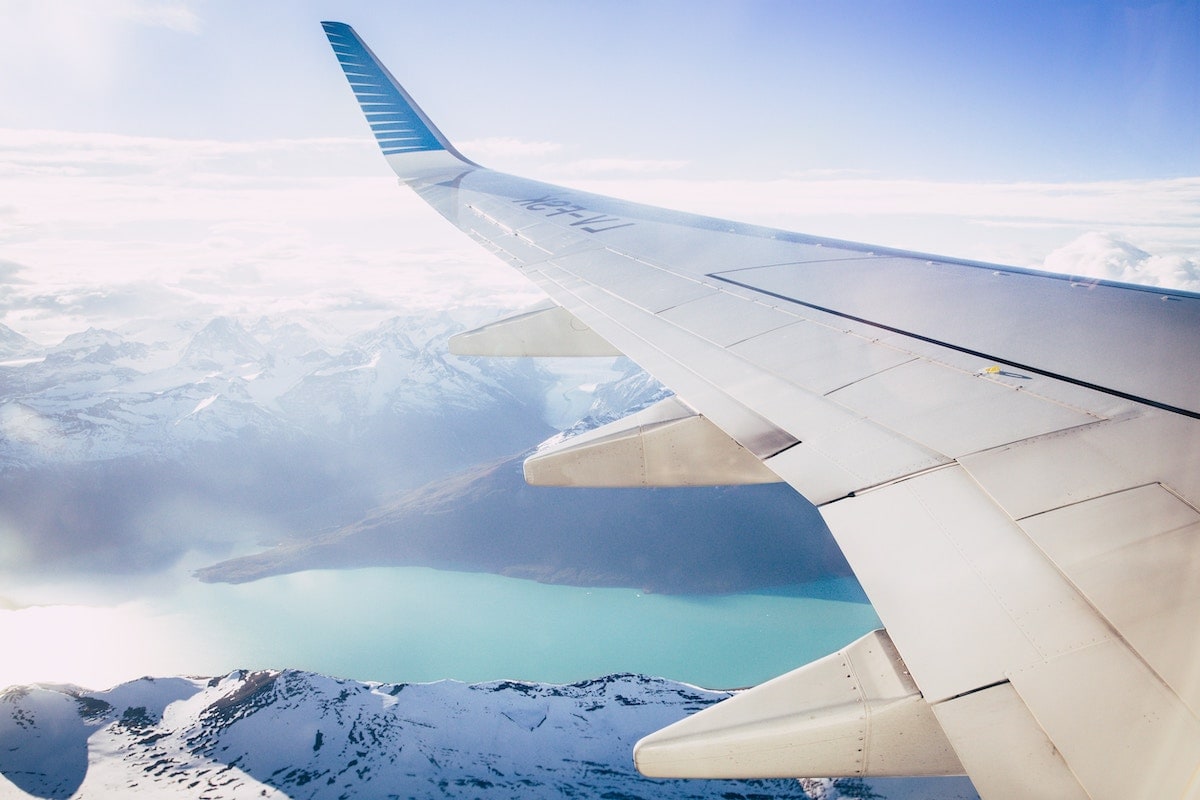 As I mentioned above, a lot of budget airlines aren’t on the flight comparison websites. Therefore you might be missing out on some of the best ideas if you forget about them!

Flying budget isn’t for everyone, but in my view, you may as well save on the flight if you can and have more money for the holiday itself! I fly budget airlines all the time, and they’re really not bad if you’ve read the rules, get there in plenty of time and know what to expect.

Budget airlines usually mean you have to sacrifice free food, legroom, drinks and inflight entertainment, but not always (especially on longer flights).

If you’ve found a great deal on a budget airline then here are a few top tips for flying with budget air carriers.

Here are a few budget airlines to try next time you’re looking for cheap flights.

Budget airlines in the US

Yeah, it might clog up your inbox but doing this is the best way to keep on top of cheap flight deals and sales on flights. If you’re really precious about your inbox looking clean then look into creating an email just for your airline deals.

Find the cheapest days to fly

Some times are cheaper than others to fly but there’s no one day that is always cheaper than the rest of the week. People used to say Tuesday was always the cheapest day to fly but that doesn’t appear to be correct anymore.

One thing I found when flying out of London was that flying Friday night and returning Sunday night was usually more expensive. That meant we often caught super early flights on Saturday and would take Monday off work and fly back then.

Typically it’s cheaper to fly mid-week but you can also find cheap flights on Sundays too.

Luckily, some of the best flight comparison sites make it easy for you to find the cheapest days to fly.

How to use Skyscanner to find the cheapest days to fly

My favourite flight comparison site, Skyscanner, makes it easy to find the cheapest day to travel.

Click the ‘Depart’ box and select “Whole Month”. This then gives you the option to search for “Cheapest Month” if you’re super flexible, or if you know roughly when you want to fly, you can just select that month.

Regardless of which option you’ve picked above, you’ll now be shown a grid of dates and the prices for flying on those dates. The prices are all handily coloured coded too! If there are some days with magnifying glasses instead of prices you just need to click to find the price (these ones are usually more expensive!). 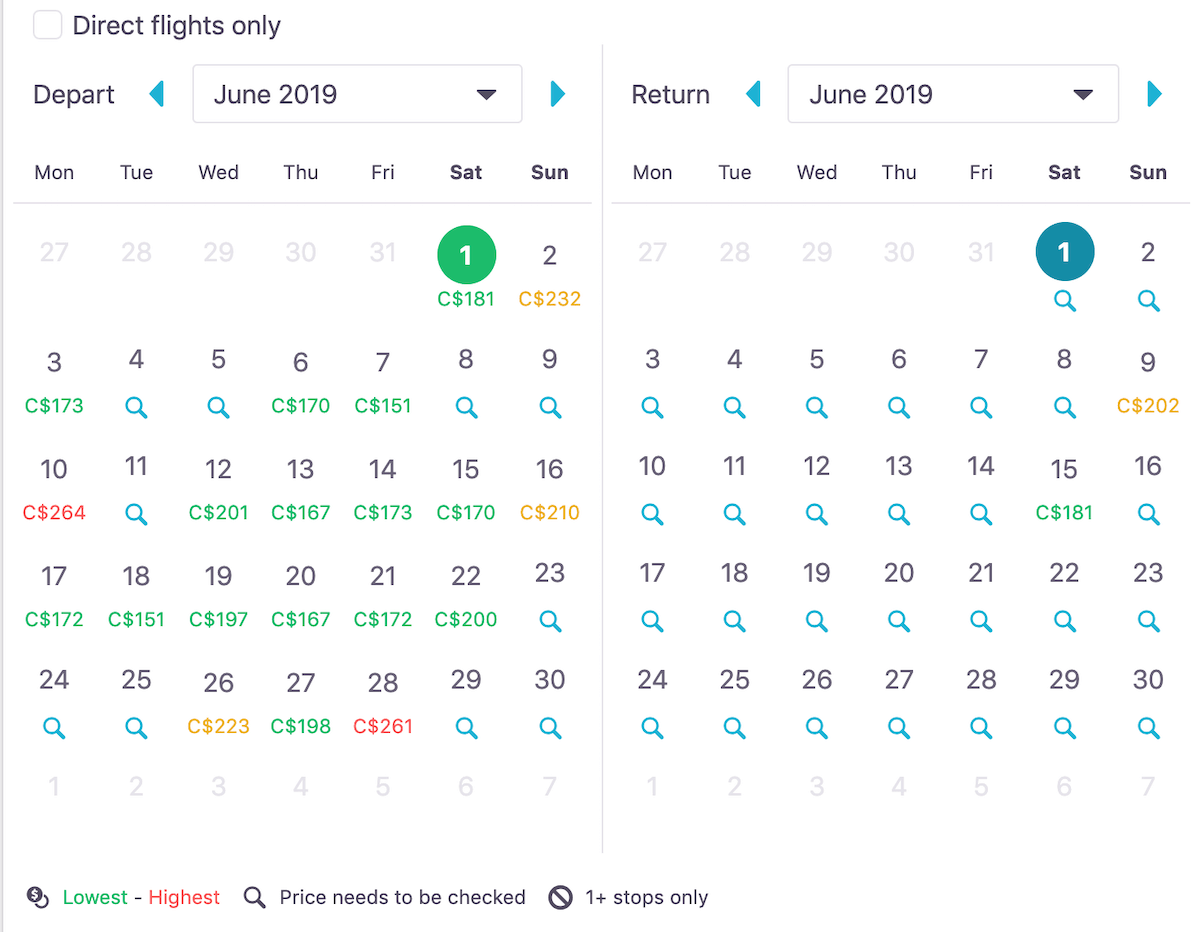 You can also do something similar with Google Flights.

Not sure where to go? Find the cheapest places to fly!

I love, love, love this cheap flight hack! Thom and I used it so many times when we were living in London. I think this works best in Europe since flights are shorter and there are more budget airlines, but there’s no harm in trying it elsewhere.

Again, I use Skyscanner for this and instead of putting a destination in the “To” box, you simply put “everywhere”. You’ll then get a results page of the cheapest places to fly to from your location. It literally couldn’t be easier.

You can also do the same with Kayak by clicking “Explore” and you’ll get a map of the cheapest places to fly all over the world.

Don’t leave it to the last minute

I’m not sure where the advice about booking flights at the last minute came from. Perhaps it used to be a useful trick for finding cheap flights but nowadays it really isn’t the case. The longer you leave it, the more expensive that flight will get.

You can usually book flights a year in advance but you shouldn’t necessarily do it that early as the airlines haven’t properly assessed demand and tend to have high prices straight off the bat. I’d personally say between 6-10 months is a good time to book but I have no evidence to back this up!

Search for one ticket at a time

Airlines tend to have several different prices for the same flight. And no, I’m not just talking business class vs economy. Because of this, it’s often better to search for one ticket at a time.

There may only be one ticket left at the cheapest price and if you search for two tickets the airline isn’t going to give you one cheap ticket and one at the next price. No, they’re going to give you two tickets at the more expensive price! You can usually change your seats at check-in or when you buy your ticket so if you want to sit next to the person you’re travelling with you can still try this method and sit next to them too. 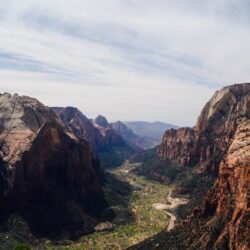 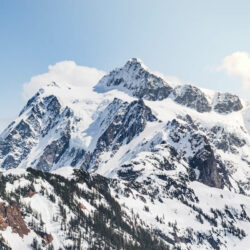 Mt Frosty from a couple of weekends ago ♥️ #m