How to use the high speed trains in China

Here is a guide to using China’s high speed trains which should make the process a little smoother!

China has gone from a country with virtually no railways as late as 2007, to being a country with the longest high-speed railway system in the world in what seems like no time at all. What would take other countries decades to replicate took China just a handful of years.

Nowadays there are now over 12,000 miles of high speed track where the high speed trains travel at up to and over 124mph! There are also plans to expand the network and bring in even faster trains!

Travelling by train in China is by no means the cheapest way to get around but it sure is quick. It’s pretty comfortable too and with plenty of trains leaving each day and covering most of the tourist-friendly destinations in China, it’s now easier than ever before to get around this vast country thanks to the high speed trains.

The stations are normally quite far out of the city

Think of it a bit like a Ryanair or easyJet flight. When you catch these flights you rarely end up close to city centre at your destination, much like with the Chinese high speed trains.

So, if you’re planning to leave early in the morning to get a full day at your next stop remember to check where the station is when booking your hotel. That way you won’t find yourself having to travel across the city and then some just to get to the station.

The majority of the high-speed stations in China’s bigger cities are absolutely massive. They’re seriously impressive too; although on our first few train rides we were left wondering why exactly they’d been built so big as there just weren’t many people around.

It’d probably take you the best part of half an hour (if not more!) to walk from one side to the other. So it’s really important to make sure you’ve left yourself enough time. If you’re at the ticket office make sure the train you buy a ticket for doesn’t go for another 20 minutes at the very least. We ended up missing a train that was due to depart in 10 minutes as we just couldn’t find the platform and the station was HUGE.

You can always guarantee that when you’re in a rush, the platform you need will be the opposite end to wherever you happen to be. The ticket offices, in particular, always seemed to be miles away from the platforms whenever we took the train!

The train stations are full of ticketing machines like you might be used to back home but don’t be tempted to try and use them as you simply won’t be able to. The machines require you to scan your Chinese identity card so unless you have one of those, forget it – you’ll need to use the counter instead. 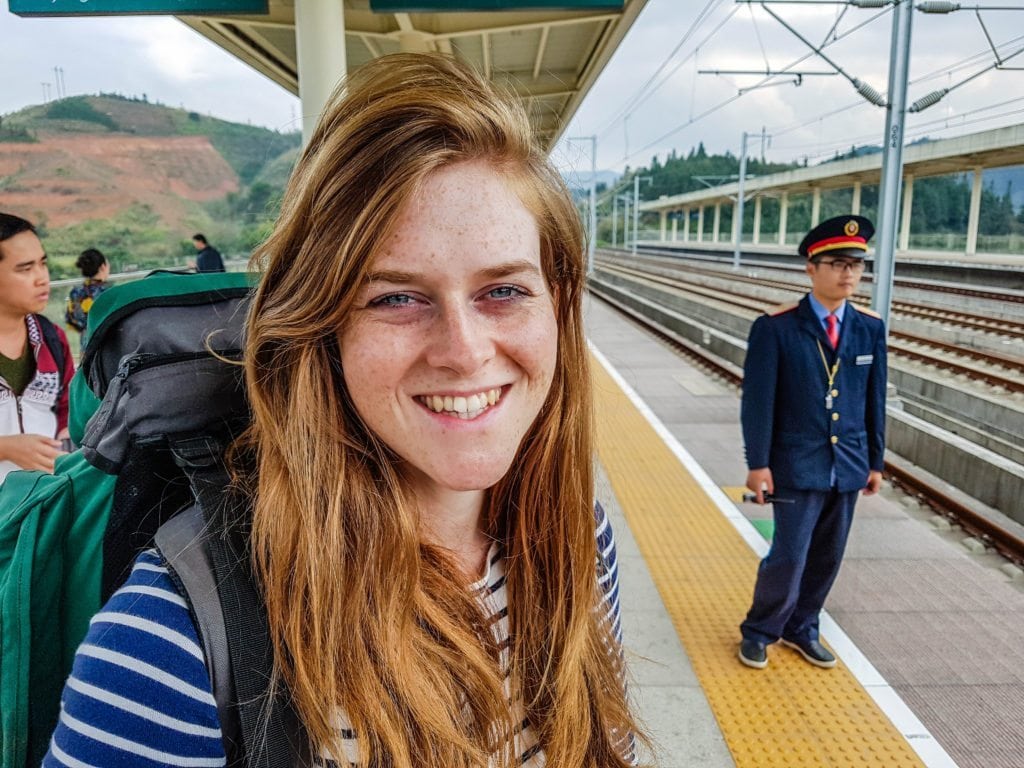 Be prepared to queue for a high speed train ticket

As I mentioned above, most of the time the stations we travelled from were pretty quiet but don’t count on that. The last train we took we understood just why the stations and ticket halls had been built so big.

Despite the fact that it wasn’t a Chinese holiday (don’t travel if it is!), the station was absolutely rammed and we queued for well over an hour to get our ticket.It’s important to remain flexible when it comes to travel times and factor in the fact that the stations could be very busy.

Don’t book your tickets in advance

If you want to be super organised you can book your ticket in advance on sites such as China Travel Guide . However I’d recommend you don’t book tickets for the high-speed trains in China for the following reasons.

Firstly, you still have to queue up and get your tickets unless you’ve paid extra to have them delivered to you. You also have to pay a booking fee even if you’re collecting them at the station making your ticket more expensive. Thirdly, there are so many trains departing throughout the day (at least one an hour) that it’s unlikely you won’t be able to get a train that day. The only situation I can imagine you’d be turned away in is if you were travelling on a Chinese national holiday.

Not booking in advance saves you all the stress of rushing to make it to the station.

You can only pay for your tickets in cash

As with pretty much everywhere in China you can only pay in cash. If you somehow have a Union Pay card you’ll be fine, but most of us don’t. Don’t rely on Mastercard and Visa as they’re not accepted throughout China apart for in some shopping malls and fancy hotels.

You really must remember to keep cash on you at all times. It’s surprising how reliant I’ve become on just tapping my card to pay for things. Remembering to take cash was a bit of a pain at times!

We also didn’t see any cash machines at the stations so make sure you’ve got plenty of cash on you for your high speed train journey journey.

We didn’t quite have enough money for the last train we caught from Guangzhou to near Macau so ended up buying a standing ticket. However, once we were on the train we sat down in an empty seat that we then kept for the duration of our journey. If you’re really travelling on a budget then just book standing and hope you get a seat regardless!

Have a chinese translation ready

One of the biggest challenges of travelling by any method in China is the language barrier. Despite trying to learn some Mandarin before we left we failed pretty spectacularly and the only words we picked up where “hello” and “thank you”.

At the train stations most of the signs will be written in Chinese characters apart from at cities like in Shanghai and Beijing. Don’t rely on the staff speaking much English either, it’ll probably be about as good as your Chinese ;).

We always made sure we’d looked up the Chinese name of the towns we were travelling to, or asked hostel staff to help us out with a translation before we headed to the station. The hostel staff in China will normally speak enough English to help and having the translation written down on paper will really help!

Remember to have your passport with you when you’re heading to the high speed train stations in China as you won’t be able to book a ticket without it. Chances are you’ll probably have it on you anyway as it’s a good idea to always keep your passport on you when travelling for safety and in case you’re stopped and need to prove your right to enter that country.

This tip for catching the high speed trains in China just serves as a reminder not to plan ahead and head to the station the day before and forget your passport!

Chinese train stations are tight on security. Back home there’s no security on trains across the country; the only time I’ve seen security for a train is the Eurostar! Things in China are different though and not only will you see security at the high speed trains stations but also on the metros and subways too.

Once you’ve bought your ticket for the train you’ll have to find your platform, show your ticket and passport to staff and then head to security. Here your bag will be put through a scanner and you’ll have to walk through one of those machines or be patted down.

Whilst we didn’t have anything taken off us at the high speed train stations, I did get some dry shampoo taken out of my bag when using the metro. They didn’t seem too happy that the bottle had a flammable sign on it. But then again, so did the deodorant and a few other things in my bag so I’m not sure why this was different…

Always leave plenty of time to get to the station

The final tip is the most important. Leave plenty of time as a buffer when using the high speed trains in China.

As you’ve seen above, not only are the stations far out of the city centre, but there might be a queue for a ticket, the stations are huge and take a while to walk through and then there’s security to go through too.

If you’re hoping to be in your destination by a certain time then make sure you leave for the station a few hours before the train you’ve planned on catching depart.

Do you have any more tips for catching the high speed trains in China?