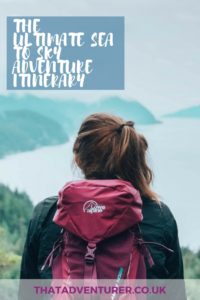 Every winter’s morning I’ve been waking up with the sunrise and glancing out of the windows before I do anything else. You know it’s going to be a good day when the tops of the mountains have turned white. The trees covered in a dusting (or a dump) of snow.

But, when the mountains aren’t covered with snow it’s not all that bad. There’s the sea for swimming in, the forests for running and the lakes for kayaking.

Those extra special days where the clouds part revealing sunshine and combine with a fresh dump of snow on the mountains? Well, that calls for an adventure.

A Sea to Sky Adventure

Living in Vancouver you’re right at sea level but less than an hour from the mountains and in between that you’ve got the rainforest and lakes. That got me thinking. How many different adventures could Thom and I cram into 36 hours as we travelled from sea to sky? It turns out there are infinite possibilities for adventure.

This adventure was extra special as we got to take my new Lowe Alpine Aeon daypack. It’s designed for people – like you and me – who have an infinite possibility mindset. It’s got a heap of features that make it perfect for adventures whether your adventure is trail running, skiing, hiking, cycling and mountain biking or a combination of all of the above. There’s more information below but first, let’s talk sea to sky adventures!

Wetsuit, cap and goggles on, it’s time for a refreshing dip to start the day at Sunset Beach. On recent mornings the sea has been a picture of calm and it’s impossible to resist a swim even though it’s not the warmest right now!

I love swimming but it’s even better when you’re not bound by the limits of a pool. I’m forever amazed at how clear the water is for a beach right on the edge of a major city. I can’t wait for the Vancouver Open Water Swimming Club to start up again in May.

The Aeon backpack is big enough to store my towel in and, since the material is so light, it also dries pretty quick. I found this out both by accidentally leaving it too close to the shore and by falling in snow whilst skiing later in the day!

Since we’re trying to pack in as many adventures as possible Thom set up the kayaks (they’re inflatable!) while I swam and then it was out of the water and into a kayak. The Aeon came on board with us so I could store a few layers in it as well as breakfast and to make the most of the hydration compatibility.

The 20L Aeon backpack which I have is also small enough to squish into the front of the kayak which I was very impressed with! 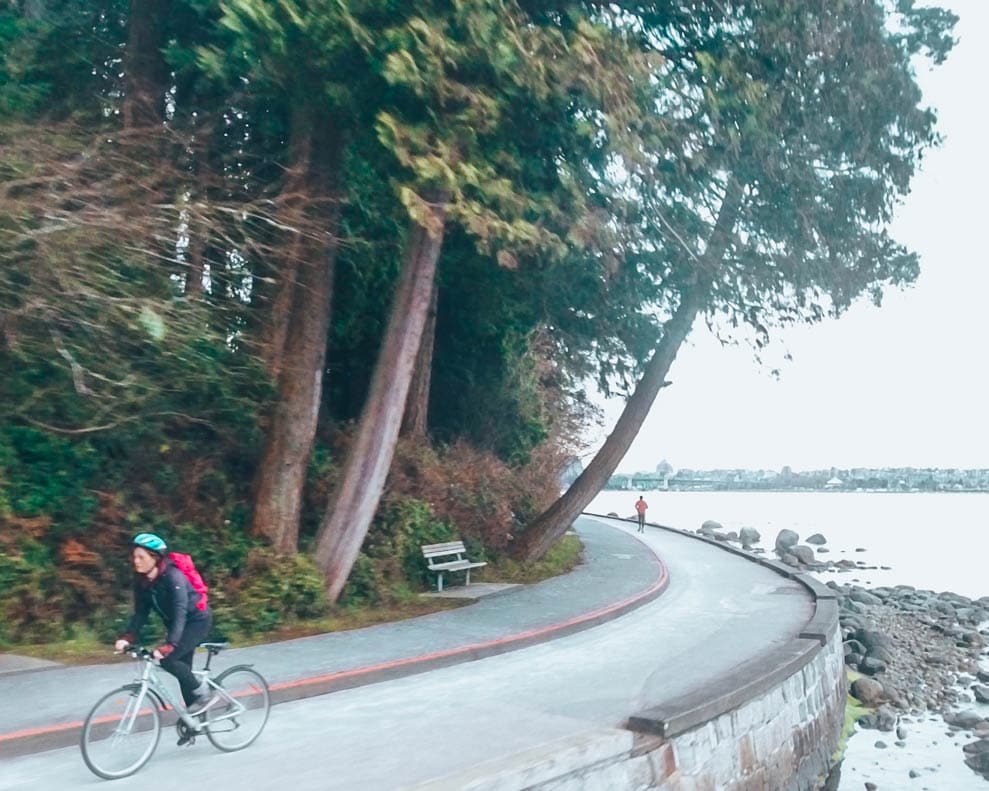 Leaving the water behind, I picked up my bike for a cycle along the seawall. It was still pretty early so we had it pretty much to ourselves apart from a couple of runners! There’s nothing quite like cycling along an empty path with the sea to one side and the forest of Stanley Park to the other.

I cycle around Vancouver every day – it’s my go-to form of transport as a dog walker – and I’ve been wearing my Aeon backpack. It’s super lightweight and fits nicely on my back. My previous bag would bump around a bit and is now noticeably heavier than the Aeon. 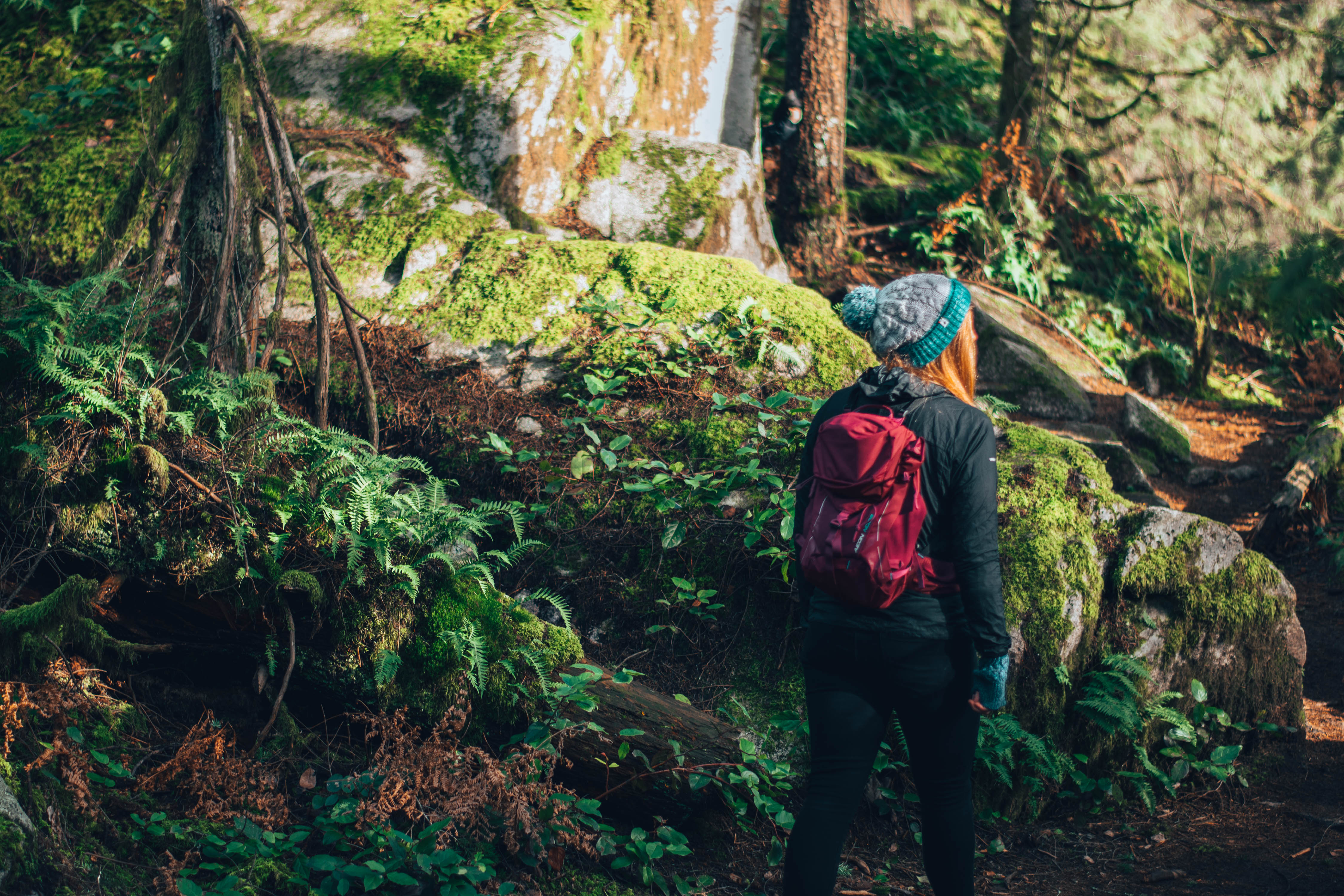 Heading away from Vancouver and leaving the sea behind, we began the climb along the Sea to Sky Highway.

The Sea to Sky highway is known for being one of the most beautiful drives in BC. You get great views of Howe Sound with its numerous forested islands to your left and notice the mountains get higher and higher to your right.

There are so many great stops offs along the Sea to Sky Highway (read about them here), but today we stopped off at Murrin Lake Provincial Park for some trail running & hiking.

Taking the trail to the Quercus viewpoint I ran (and sometimes walked) along the route. There were trees stumps to hop over, rocks to negotiate and amazing views once we reached the top.

Trail running is far more fun than road running, so if you’ve ever tried to give running a go but couldn’t get into it, go find a trail in the woods, or through a field and try there. It’s a bit more technical what with the natural obstacles to manage, but it’s prettier for sure.

If you’re a rock climber there are several places along the way where you can climb too. 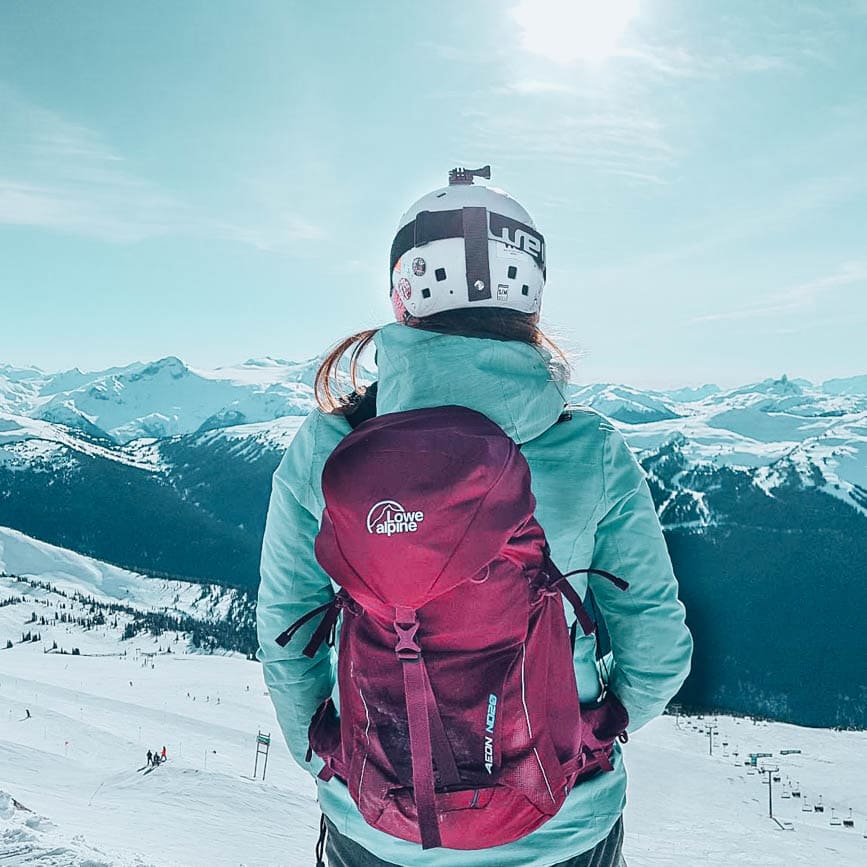 Arriving in Whistler as the sun began to go down we parked up our adventure van, Elvis and settled in for the night. This tends to involve making sure we’ve got enough snacks packed to stay fuelled for the following day and finding somewhere to refill water bottles.

Whistler is great for people living or staying in a van or RV as they don’t seem to mind you spending a night in their car parks. We stayed here once over summer where we had our vent going to get some cool air into the van. We definitely didn’t need that this time around as temperatures reached -10.

I woke at 6.30 the next day and tried to get dressed while still in the sleeping bag and under the duvet. It was a warm night’s sleep thanks to layers and Elvis’ insulation, but as soon as you move the cold air hits you!

Lift passes bought we popped into Lift Coffee for a breakfast burrito and some coffee. When the lift queues opened at 8 am we were amongst the first group of people up and enjoyed almost two hours of skiing before queues started to form.

The Aeon 20L is small enough that you can get away without having to swivel it round to your front before getting on the chair lifts. However, if you are asked to move it then simply undoing the chest strap means you can manoeuvre is over so it sits on your front. 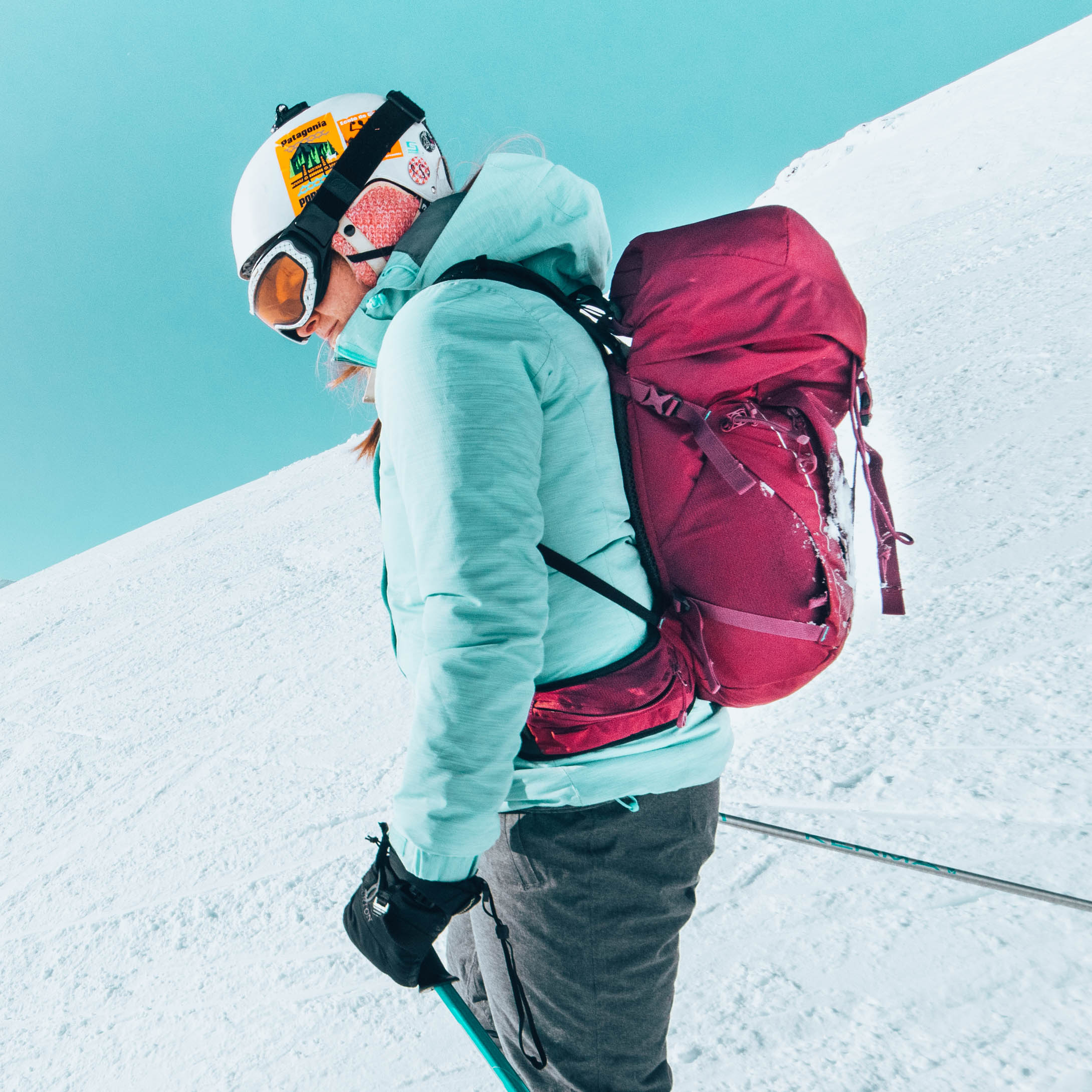 We’d truly lucked out with the weather. Clear blue skies and plenty of sun which softened the hard-packed snow (and meant I had to pack my Aeon full of the additional layers!). Oh, and not to mention incredible views from the top of Whistler Mountain!

Driving home after a great day’s skiing and a weekend packed full of adventures is always the best feeling. Whilst we’re super lucky to live here in Vancouver it’s easier than you think to do the same wherever you live. Yes, even in London.

Tips for finding adventures near you

Make the most of the internet

First, what is it you like doing? Do you like rock climbing? Mountain biking? Hiking? Swimming? Just have a quick google for one of these activities near you and you’re bound to come across somewhere you didn’t know existed.

Since living in North America our tolerance for longer drives or stints spent travelling has increased. People over here think nothing of a three-hour drive to go somewhere at the weekend whereas back home people moan about 30 minutes.

Get a map and work out where you can get to in three hours of driving/trains/buses(or even planes!). Leave straight after work on a Friday and get back Sunday evening (or Monday morning if you’re really keen). You’ll be surprised how far you can get in three hours and it opens up a whole host of new adventures!

Leave your phone at home (or in your bag) and walk

One of my favourite adventures is to just leave my phone at home and walk. Take a turn here, a turn there and see where you end up. It may not be natural beauty but you’ll probably end up somewhere new.

About the Lowe Alpine Aeon Daypack 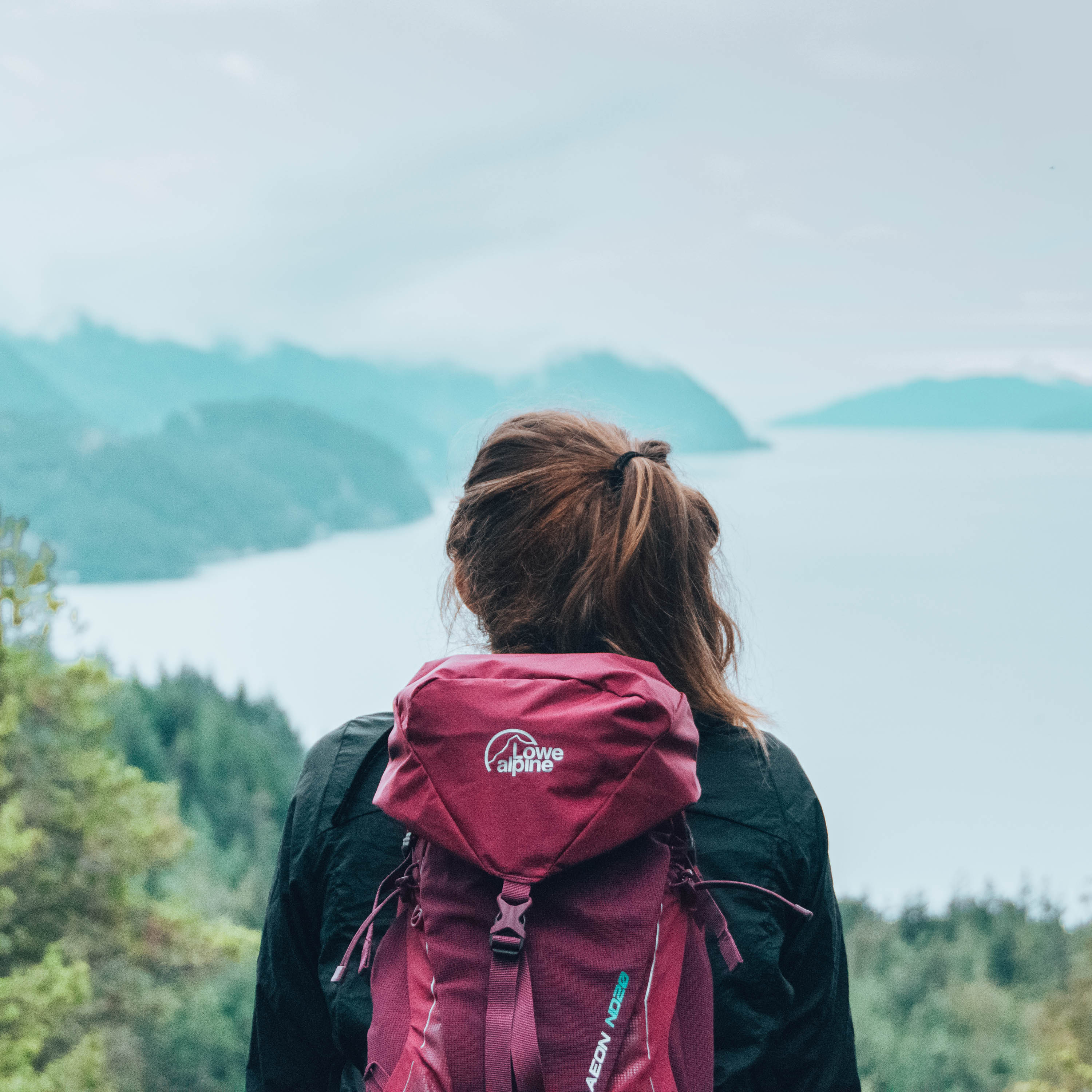 The Lowe Alpine Aeon daypack is super well designed for whatever your adventure of choice maybe. Oh and it’s very, very lightweight (the lightest bag I’ve ever come across). It’s got great functional features and comes in some attractive colours. There are four sizes for both women and men and you can choose between a zip-entry and a single buckle top loader too.

At first glance, these straps don’t look like they’d be that comfortable. It doesn’t take long to realise the complete opposite is true.

There’s no padding on the straps like you’d find on other backpacks. It’s the lack of this that helps keep the  Aeon daypack lightweight. When you’re wearing the backpack you can’t feel the straps at all. They’re super flexible and mould to the contours of your shoulders and back.  This also helps to spread the load of the backpack evenly and makes it comfortable even when you’ve loaded your pack to the brim.

The air-contour back system gives great breathability. No big sweaty patches on your back after hitting the trails thanks to this! This feature of the Lowe Alpine Aeon is adjustable too which help with support and comfort during wear.

The MultiLockTM Tool enables you to attach your adventure equipment like helmets, ice axes or walking poles to the Aeon easily. It’s a small, adjustable clip on either side of the pack which you can pop open quickly. Gone are the days of clipping your help to a strap and having it bounce around, bumping into your legs!

If you cycle in a city you’ll know how important it is to be well lit. With the Aeon backpack, you can easily attach an extra bike light to your backpack. There’s a small loop at the bottom of the backpack where you can hook a light onto and ride in safety.

At first glance, it doesn’t seem like there are that many compartments in which to put your adventure gear. However, there’s plenty of space, even in the 20L Aeon that I have. There are adjustable mesh pockets on the front and pockets along the waist belt buckles that are great for storing snacks and energy gels.

The Lowe Alpine Aeon is also compatible with hydration packs. There are even loops on both sides of the FelxionTM Harness to keep the tube from flapping about.

One of the things I loved most about Vancouver was its proximity to mountains, ocean, forests - and a damn good city too! My cousin moved from the U.K. to Vancouver 10 years ago and I can see why she never returned! Thank you for making me miss Canada all over again! (Oh, and after my “running down a pedestrian” incident in Stanley Park I definitely agree that early mornings and empty paths are best for cycling the sea wall ?)

That's why I love it too! :) Hope I've not made you miss it too much and oh my god I've almost done that so many times !