Have you ever just been blown away by a country? I often find myself thinking, “wow this is beautiful,” when I travel but I don’t think anywhere has surprised me as much as Slovenia did. From the extremely helpful woman who rented us a car (I mean, come on, when does that ever happen? – She didn’t even try and push insurance to us!) to the fact is was just SO. GREEN. 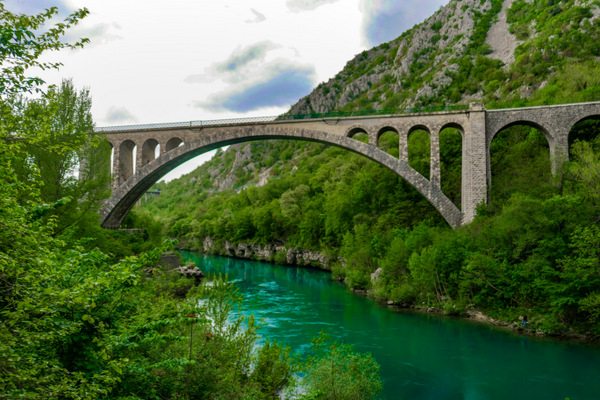 Perhaps it shouldn’t have surprised me. After all, Ljubljana has been named Europe’s Green Capital for 2016 and even the football team wear green. Slovenia as a whole is just very eco-friendly and ‘green’.

We were meeting Vesna from Slocally who’d be our host and guide for the weekend and who became our friend by the end of it.

Vesna showed us the way to Soča Valley in western Slovenia where she grew up. People come here for the rafting, hiking and skiing but, if you’re a history buff, there’s plenty of historical sights and locations dotted in the towns and hills.

It takes a couple of hours to get to The Herbal Rooms, the accommodation part of Slocally in Soca Valley, from Ljubljana during which we learnt about the Bora wind which sweeps through the Vipava valley in south-western Slovenia leaving the trees leaning at a funny angle, the adrenaline sports on offer, stories from when Slovenia was Yugoslavia and were introduced to Slovenia’s wine industry too. 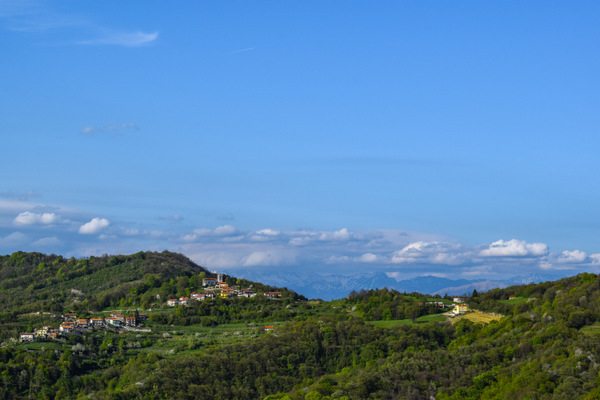 It sounds stupid now but I’d never really realised that Slovenia borders Italy. I guess I thought it was further into Eastern Europe than it actually is. We stopped off at Nova Goricia so named by Tito to annoy the Italians living just a few metres away in Goricia.

When the border between the two countries was set in the middle of the night following WWII, people suddenly found themselves living in another country. It wasn’t until 2004 that the final part of the fence between these two towns was removed!

It’s hard to understand how strange living on a border like that would be. Especially from a Slovenian’s point of view. Vesna told us you couldn’t buy bananas in Yugoslavia and that shopping and night’s out used to take place in more modern, lively Italy.

Slocally: home away from home 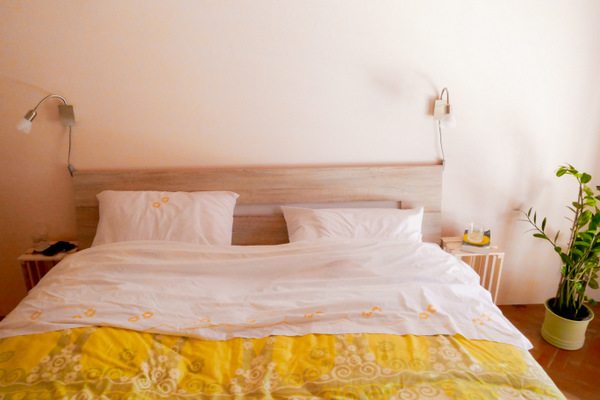 The village of Plava where Vesna grew up is home to around 300 hundred people. Her family home becomes your home when you join Vesna and her parents, Ivan and Karmen for a stay in The Herbal Rooms.

Vesna tells us that Slovenian’s love their gardens and The Herbal Rooms has a very impressive garden itself. When we arrive her father has been busy all morning fixing up other parts of the garden and her parents spend most of Sunday replanting some herbs in time for the warmer weather.

The Herbal Rooms is so called as herbs and flowers are used in both guest rooms to create a relaxing, calming and great smelling atmosphere. There’s flowers and herbs in the pillows, a second mattress made of fern and a jar of dried flowers whose scent fills the room. It’s very relaxing.

Slocally has two rooms available; a room for solo travellers and a double room which has a separate room joined to it for two children making it perfect for families. Vesna tells us she only ever has one guest, or group of guests, at a time so that you don’t have to share a bathroom. The guest rooms at The Herbal Rooms are on the top floor of her family house so guests get privacy when desired. 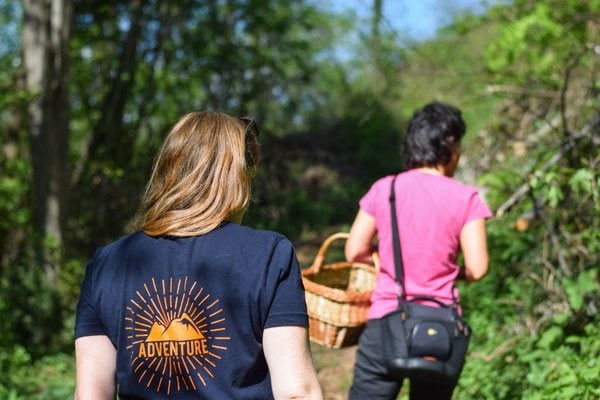 Besides the accommodation aspect of Slocally, Vesna is also available to guide you around her country. This can be in many forms, one of which involves foraging.

Having grown up in the countryside I really feel like I should know more about wild herbs. Of course we used to forage for blackberries, have made crab apple vodkas and have picked elderflower with which my Mum makes the best elderflower cordial but that’s about as far as it goes.

Up until our stay with Vesna I’ve never done much more than that. I’ve smelled wild garlic but wouldn’t know what I was looking for and as far as I was concerned, dandelions were just flowers you find in fields. I’d have never thought of eating them. 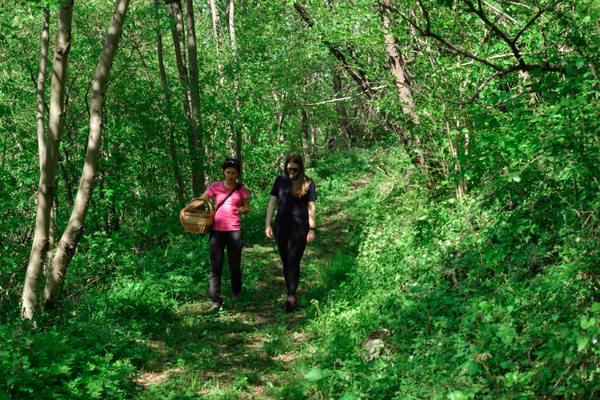 On the afternoon of our arrival we headed 10 minutes up the hill from The Herbals Rooms and into the forest to pick wild garlic with which we’d make omelettes for Sunday’s hike through the valley. 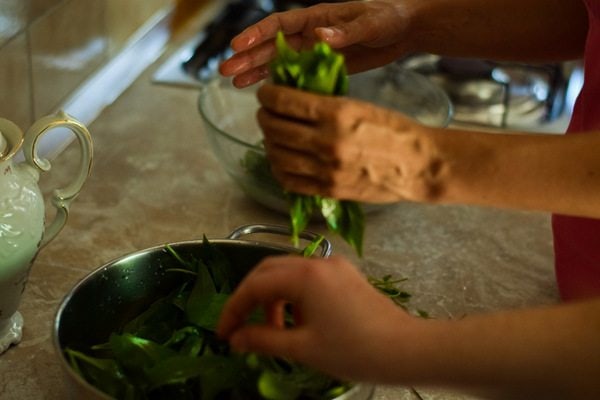 Vesna spotted wild garlic and wild asparagus almost immediately and told us how to differentiate wild garlic from a similar plant that’s poisonous. The main give away is the smell of the leaves: if it’s wild garlic you can smell garlic on the leaf (the part you eat), if it’s not you simply don’t get that garlicky smell.

We picked herbs, looked for the first of the wild strawberries and tried to absorb Vesna’s knowledge. She’s been taking classes to learn about wild herbs and hopes to pass on her knowledge so that it’s not lost as we all become too reliant on supermarkets. 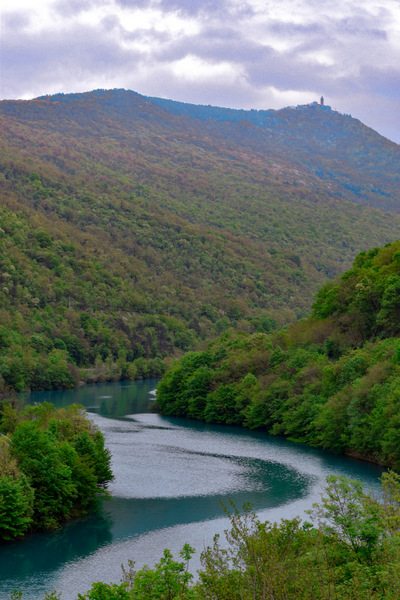 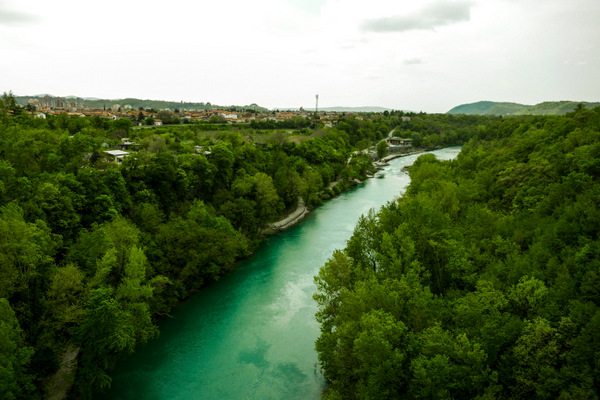 Sunday was all about hiking and what a beautiful one it was. We followed the Soca river from Plave for 10km west until we reached the town of Nova Goricia. 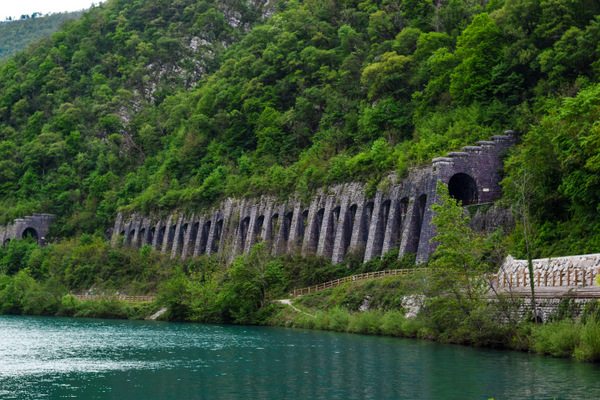 The trail’s popular with cyclists and hikers alike and in fact has recently been paved over to make it a nice smooth ride for those on two wheels, and not too demanding and bumpy underfoot for walkers. It’s the perfect way to spend your Sunday in Slovenia and make the most of the fresh spring weather. 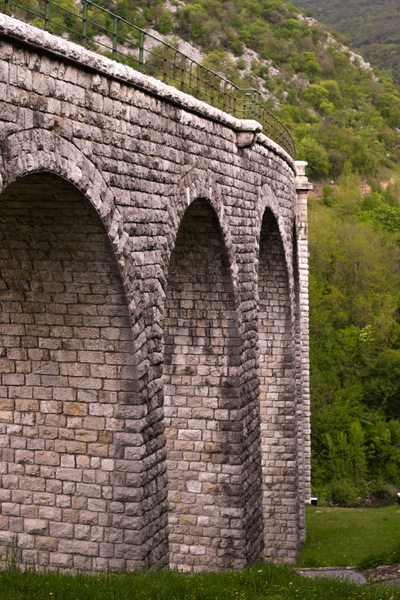 I couldn’t take my eyes off the emerald green waters of the Soca river during our walk (apart from when we stopped to eat the delicious herbal omelettes Vesna’s father had made for us!).

At the end of our trail a surprise awaited us. An ice cream surprise!

The ice cream shop in Nova Goricia had a great range of flavours to choose from and I opted for raspberry and dark chocolate. If I could buy that in a shop I totally would!

It was a busy 36 hours in Soca valley and we woke up early to cram as much in as possible each day. But, in some ways, it’s a long time since I’ve felt more relaxed and I’m totally in love with Slovenia’s Soca valley! Hvala Vesna!

Visit Slocally.com for more details and check out Vesna’s blogs for plenty of information on things to do and see in Western Slovenia!

I love the way you show all the post. Anyway good post.Thumbs up !!!!

What a relaxing and peaceful place the valley looks. Really awesome too that you got to forage in the forest for wild herbs. I bet the omelettes tasted fantastic.

They tasted absolutely delicious. That reminds me I need to recreate them myself!

Wow it really does look so beautiful and green! The homestay looks lovely and the wild herbs picking also sounds like a great addition to the stay,

The wild herb picking was so cool. Something I'd never have thought about doing before but I loved it!

i think it is SO awesome that you went foraging in the woods, i'm very curious to try a crab apple vodka or even, the elderflower cordial. there's an essence of something special in elderflower..

looks like an awesome place to adventure, relax and unwind

It was so relaxing, desperate to go back already :)

What a beautiful, eye-opening article about Slovenia. It really is so green! It must've been fun cooking with herbs you picked yourself. Although I would be nervous about picking garlic. I'd be afraid I'd pick the wrong plant.

Vesna was great at showing us the right plants (she doubled checked them too before we cooked it haha) but it's quite easy to tell just from the smell, fortunately!