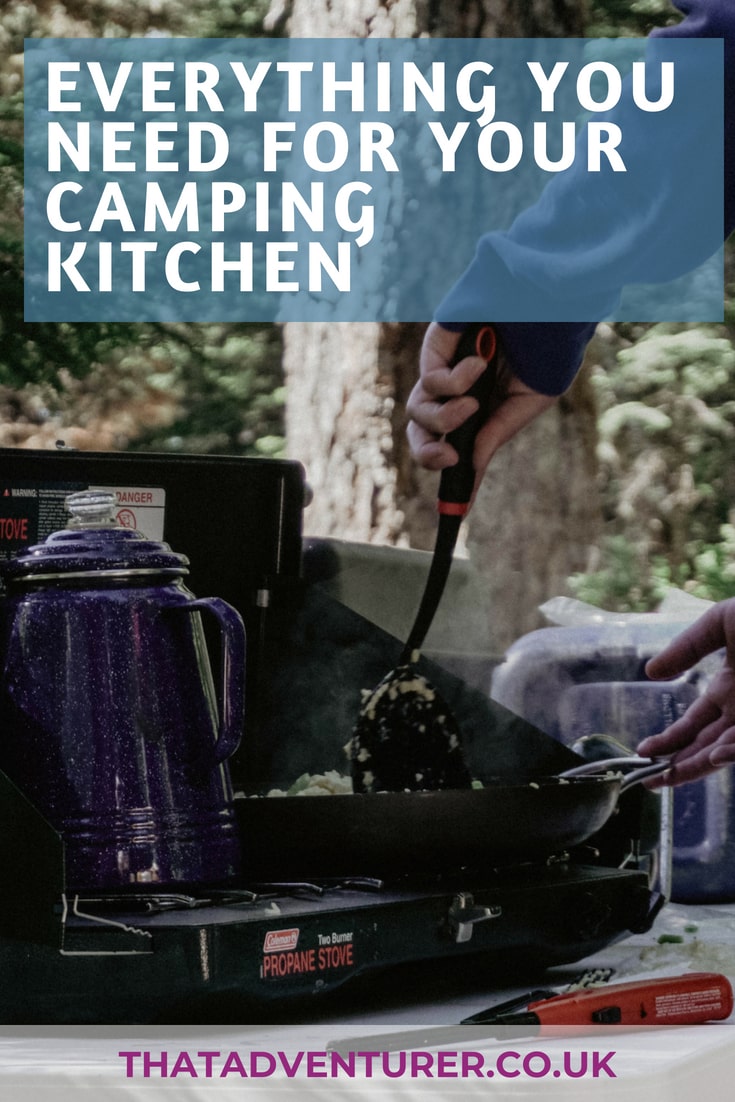 When we were living in our van we kept our kitchen pretty small. I mean, Elvis was full of everything else we’d moved from the UK to Canada with, there wasn’t much room for an extensive kitchen. We picked up basics (and in all honesty our kitchen now we’re in an apartment hasn’t expanded that much), and made do. You’ll find the basics we used in this ultimate car camping kitchen list, but you’ll also find some luxury items that’ll make your car camping experience that much better. Everyone will want to go camping with you after this!

A word on car camping kitchens

Don’t worry about having to get everything on this list in order to go camping. You really don’t need it all. As long as you have a stove, gas, a pan, and some utensils you’re pretty much good to go. If you find you enjoy camping and want to do it more often then you can build up your camping kitchen over time.

Another thing to note is that you can get most of your camping essentials from dollar stores or Ikea. No one needs to be spending $20 on a spork when you can get utensils for 4 for less than that at a dollar store. When you’re car camping weight and bulkiness is less of an issue, so save the expensive, ultralight items for backpacking!

If you’re short on space, travelling on a budget, or aren’t too fussed about luxuries while out camping then stick to the basics. This list is based off what we had in our camping kitchen while living in our van for five months as we travelled across the USA. And not that I mean to brag, but we had some pretty mean feasts during that time!

You’re going to need somewhere to keep your camp kitchen essentials. In our van we had a couple of wooden crates that slide in and out of some shelving. However, a big box like this would work just as well (probably better). Another advantage of having a big box to store your camp kitchen in is that you it’s easy to carry out of your car after your trip. You can then just wash everything at home and repack it so that next time you go camping you’re ready to go!

We have a big 10L bottle to hold our water in. We picked this up at Walmart where it came as bottled water and have just been using it ever since. You can also get a purpose built water container such as this. If you’re staying at a campsite you’ll probably only need one as there’ll be a tap somewhere.

Coolers aren’t 100% essential, you can definitely do without but they do make things a lot easier. About 2.5 months into our road trip we bought a small, budget cooler from Walmart that does the job pretty well.

Cooler vary massively in quality, size and cost so it’s up to you how much you think you’ll use it. If you want to store perishables and drinks then go for something bigger. If it’s just either or then you can afford to go smaller.

Apparently this will keep your ice cool for 3 days and it also has a drain in it too. I’d never thought about this before we got our cool box but it would be very useful for draining out all that melted ice

If your tent camping but driving to the campsite you might like this cooler as it comes on wheels. Definitely a lot easier to roll something along than it is to carry a cool box full of food & beer!

This is similar in size to the one we have (a little bigger even). It’ll store your essentials like milk, cheese, a couple of beers but not much else. Take a closer look

You’re going to need something to cook on out there! Whilst backcountry campers are going to have to make do with something tiny, car campers can get something a bit bigger. Our 2-burner stove hasn’t ever let us down and it’s great being able to have two pans on the go.

This is one of the more popular camping stoves for camping kitchens. I’ve seen it about a lot but to be honest there’s probably not much difference between this one and the one below (which we have). It just looks slightly smarter because of all the extra chrome.

This is the cooker we have and I like the fact that it’s super easy to remove the grate over the top for when you inevitably spill something underneath. We’ve never had any issues with it!

A camp stove is no use without something to fuel it! We usually pick up these bottles of gas and they tend to last us a pretty long time.

You’ll also want a lighter if your camp stove doesn’t have a built in ignitor. Even if it does it’s a good idea to have a back up!

You could go all out here with different size pots and pans but one saucepan and one frying pan will be plenty.

BIG NEWS! Cooking utensils don’t have to cost a fortune. If you’re made of money or have just wont the lottery then sure splash out and get those super expensive sets from outdoors brands. But, if you just need something that gets the job done then head to your closed dollar store or Ikea to find most of these items.

I would suggest getting cooking utensils and cutlery just for camping as that way you can store it in your big storage bin and you’re always ready to go!

This set has everything you need and more. Tongs, spatula and a whisk; you’ll be cooking up a storm!

Buy a second one for your camping kitchen. Trying to open a can without one is a pain!

Always a good idea to have one incase you pick up a bottle of vino that requires it. They can also be used as bottle openers most of the time.

You’ll need a chopping board at some point! You don’t want to use a campsite bench!

These ones not only look pretty but they also have a guard so you won’t accidentally cut yourself when reaching into your camp kitchen bin.

We tend to eat everything out of a bowl when we go camping and when we lived in our van. They’re just easier since things don’t slosh out and you can use it for everything you’re going to eat. These enamels ones are great as you’re not going to smash them into a million pieces!

Check them out on Amazon

This cutlery set even comes with a bag to wrap it all in.

Something to drink out of

For ease we pack just our coffee mugs and drink the beer straight out the bottle. These Hydroflask mugs are something I’ve been eyeing (especially the turquoise ones) and these keep your drinks hot or cold for hours! Plus some of them can be used to keep food warm too.

For when you venture out of your campsite for some adventuring and just useful to have around. We recently bought these bottles from Mountain Warehouse and they’ve been working great so far!

Take a look at these water bottles

You can go all out with coffee or you can keep it super, super simple. Since I’m a coffee addict bringing coffee with me when camping is definitely a necessity. Our van kitchen has a French press but when I couldn’t be bothered with cleaning this out (and getting coffee grounds everywhere) we’d drive along to the nearest town and find a coffee shop there.

Coffee is a basic for me and this French press will do the job.

I recently came across this coffee company and I am definitely going to be getting some for our Alberta trip and any backcountry camps I go on later this summer!

Our van, Elvis, has a sink in him so we didn’t need to purchase anything extra. If you’re staying at a campsite some of them will have a wash up area too. Honestly though you don’t really need a big basin to do your washing in. Just grab a water bottle slosh a little water on and scrub away the dirt. Then another quick slosh of water rinses it off. Minimal water usage and little fuss.

For when you want to up-the-ante and make your camping trip even more fun these luxury kitchen items will do the trick!

I used to think making your own ice cream was a laborious task but that’s not true with this ice cream ball that I’ve been seeing in every outdoor shop! Just add cream, sugar and your choice of flavourings with ice and rock salt and then play ball for 25 minutes and you’ll have yourself a pint of homemade ice cream!

I’m always looking at getting a dutch oven but since we don’t often stay in a campsite with a fire pit we could use it on I’ve stuck to lighter cookware. I think it’s a great luxury item because with a dutch oven there’s no limit to the things you can cook outside! One day…

People always seem to have a few old camping chairs lying around in a cupboard but for a real touch of luxury you might want to get this table and chair set. More comfortable than being sat on the floor, and easier to eat from too!

See it on Amazon

I’m not even sure this counts as a luxury since toasting marshmallows on the campfire has to be done! I guess it’s an upgrade if you’re just using some sticks you gathered from around the campsite!

You can very easily store your eggs in the box they come in but this gives you a little extra security. Smashed eggs are a pain to clean up!

See it on Amazon

Because fresh popcorn and a sunset view are pretty idyllic.

If you’re a cheese lover and can’t stand the thought of putting pre-grated cheese on your camp pasta then you’ll want a small cheese grater too. Again, you can pick these up in dollar stores and those random shops that sell everything for super cheap. This one is a pretty great price too.

The dream cooler because it looks cool, is supposed to work extremely well and look how many things it would hold!

If you’re planning on doing a lot of camping this summer and love to cook then you might want to get one of these camp kitchen set ups. They don’t come with all the utensils but they make sure you’ve got plenty of storage and prep/cooking space!