2017 was the year we left the UK and moved to Canada. But, before we settled in Vancouver, we did a three month road trip around the USA, and then spent an extra two months living in our van when we first got to Vancouver.

Everyone who lives in a van for a time comes out of it saying they’ve “learned” something from living in a van. And yeah, it’s true. Chances are you will have learned something. I learned plenty but I’m going to spare you the “finding myself” rubbish and the “everyone should be a minimalist” spiel and tell you about the really, really important things I learned from living in a van.

Want more vanlife inspiration?
My list of essential gear for vanlife
Vanlife: How to stay clean whilst living in a van without a shower
How to find places to sleep for free when living in a van
Where to find water when you live in a van
Where to shower when living in a van
How to make a stealthy camper van and sleep for free every night!
How to survive vanlife in WINTER
Easiest Solar Panel installation for your van
10 ways to make your van feel like home
Tips for parking overnight for FREE in urban areas
Best FREE road trip apps from US road trips
Our three month, cross USA road trip route
Vanlife inspiration
Things to think about before choosing your vanlife home 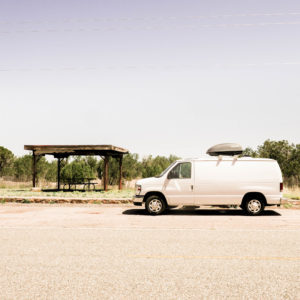 Standing up is seriously underrated

Our van, Elvis, is a Ford Econoline van and he’s not very tall. If you want to stand up inside him, well, you can’t. When you spend 5 months getting dressed whilst lying down and bending at 90 degrees from your hips to cook dinner, you realise just how underrated standing up is.

Seriously, standing up is amazing and when we’d emerge from our van every morning I’d definitely appreciate it.

When we found an apartment in Vancouver everyone said “Oh, I bet you’re excited to have a nice bed.” And yeah a bedroom would be nice, but actually the bed in Elvis is probably the cosiest bed I’ve ever slept in. The thing I was most looking forward to was standing up to cook, to brush my teeth, it’s awesome.

Powdered milk will save your breakfasts

We didn’t have a fridge whilst we lived in Elvis and didn’t even have a cool box until about month 3 of 5. Since we both enjoy cereal for breakfast and enjoy a good cup of tea we had to find a milk that wouldn’t go off after a couple of hours without a fridge in the Louisiana heat.

We tried smaller cartons of milk but didn’t want to have to stop by a shop everyday. We tried UHT milk, we tried almond milks and soy milks with no success. Then we bought some powdered milk and the rest was history.

I always imagined powdered milk would just be gross. Sure, it’s a bit sweeter than I’d like and if you don’t stir it properly you get lumps in your tea. But, when it comes to living without a fridge, you really can’t beat powdered milk. In fact, we still have some in our van now.

You can fry bread to make toast

We didn’t have a fridge and so we definitely didn’t have a toaster. We could’ve bought some fancy contraption that sits above our gas camping stove, or bought a stove with a grill but we didn’t. Instead I turned to google: “how to toast bread without a toaster” and discovered Jamie Oliver himself claims to not use a toaster. Apparently he toasts his bread by putting it in a frying pan.

The thing about living in a van is that you start to notice other people living in vans. If you wander through a Walmart carpark on any given day, I guarantee you’ll find several people living in vans or cars. It’s very easy to tell the “trendy vanlifers” apart from the people doing it because they have to.

Our minimalist kitchen consisted of; a camping stove, a sauce pan, a frying pan and a kettle. That was pretty much it. Turns out you can actually make some pretty tasty meals with limited kitchen equipment.

Thom still raves about the burgers with bacon and cheese I cooked up in a Walmart carpark in Arizona.

Then there were the chillies, the salmon dishes, the stews and plenty more all cooked up on a two ring camping stove.

I would avoid Starbucks at all costs while in the UK but in America I found myself going to them more and more. This was for several reasons. Firstly, you could trust they’d be open early and close late, you know you can get away with sitting there for a few hours without being asked to move on, and their wifi is super, super fast.

If we needed a new film to watch in the van we’d swing by Starbucks to download it. If we didn’t know what to do one evening we could go there and while away a few hours. Once we even sat outside, pulled the curtain across and watched Trainspotting…

Walmart has everything the vanlifer needs

I’ve said it before but living in a van isn’t all about waking up to stunning mountain, sea or lake views. Most of the time (especially on the east coast) you’ll wake up to trolleys and cars and realise you’re, yet again, in a Walmart carpark. Don’t knock it until you’ve tried it!

Walmarts have water fountains to fill up your water, they have food (obvs), they have toilets where you won’t feel out of place if someone catches you brushing your teeth, they have entertainment (shopping) for when your boyfriend sleeps in till 10am and you wake up at 7am and they occasionally have wifi too!

I made it 5 months without having ‘stuff’. It’s not like that was hard but I realised I kinda like having stuff. I like having a house with things it in. I like books, plants, photos, blankets.

A very refreshing post - I smirked when you mentioned about the "finding yourself" nonsense - so true!

Having read a lot of posts about minimalism and about how doing the van-life thing will change you forever, this was a decidedly refreshing read. I'm not sure it's something I'd ever consider, at least not for a super long amount of time, but I never would have considered missing the ability to stand up.

Also, I don't own a toaster. Instead, I just use my oven or I fry it and it's just as tasty and it keeps me counters a bit less cluttered.

Thanks! :) It's good to do for a while but I don't think I could do it knowing there wasn't an end point! I don't have a toaster anymore - just use the grill now! Takes slightly longer but as you say saves clutter on the top!