If you’re looking for a weekend away from the hustle and bustle of London life then head out of the city and to Swansea Bay. This beautiful stretch of coastline is full of adventure from hiking to surfing, climbing and new foods. All of this and more combine to make a weekend in Swansea Bay a fantastic idea! 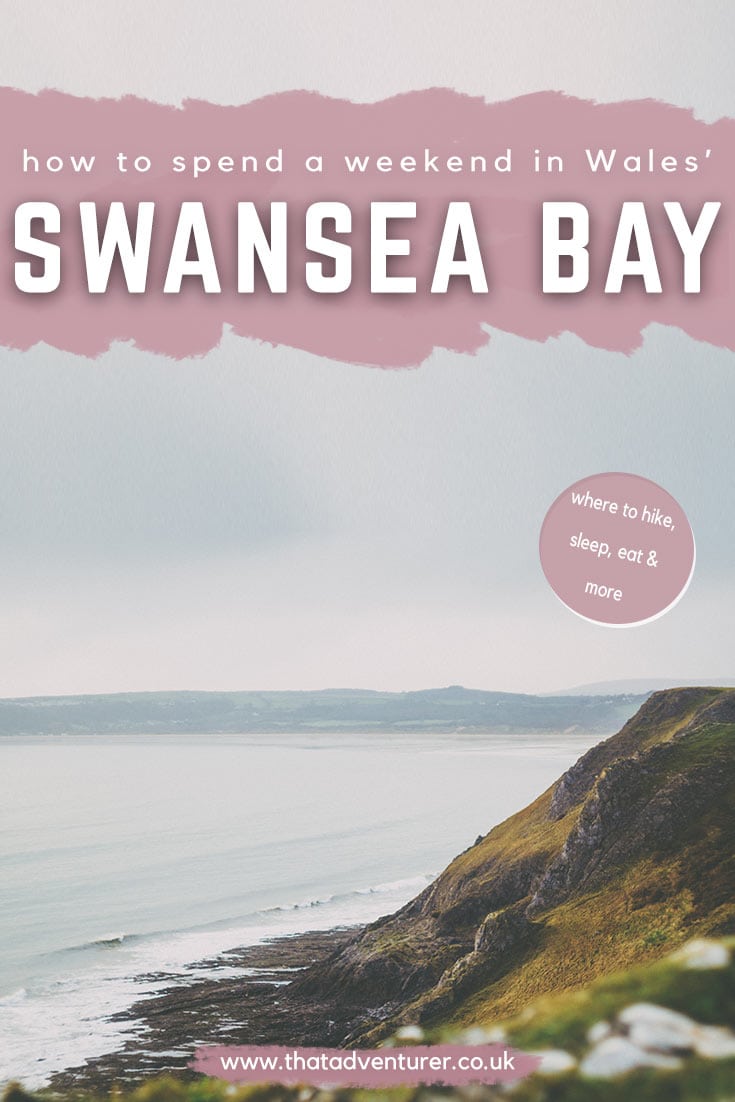 Swansea Bay is made up of 5 areas: Swansea, the Gower Penninsula, Mumbles, Afan & the Vale of Neath, and Rural Swansea.  The area truly combines something for every type of traveller. Whether you love cities (Swansea), beaches (the Gower Peninsula – Great Britain’s first ever Area of Natural Beauty AONB), chasing waterfalls (rural Swansea), cute villages (Mumbles), or mountain biking (Afan & the Vale of Neath).

Swansea Bay beaches are well known for its Blue Flag beaches (a sign of cleanliness) and whether you’re visiting in Swansea Bay for a weekend in the summer or winter, there are plenty of things to do in Swansea Bay!

Where is Swansea Bay?

Swansea Bay is in the south of Wales in the United Kingdom.

How to get to Swansea Bay in Wales

Getting to Swansea Bay is fairly easy since the city of Swansea is well served by public transport. We came from London and caught the train direct to Swansea and the Swansea Bay area.

Trains from London to Swansea Bay

The train is the quickest way to get from London to Swansea. It takes between 3 to 3.5 hours depending on which one you take. If you’re willing to make a change you can find tickets for about £60 each way.

I use Omio to check train tickets in the UK and Europe. They show you all the routes and highlight the cheapest and fastest depending on your preference. They’ll also show you the cost of buses or flying at the same time!

TOP TIP: If you’re aged between 16 and 30 you can save a lot of money on train tickets in the UK with a railcard. A card costs about £30 for the whole year and can save you up to 1/3 on train tickets. On a journey like this, you can pretty much make that money back straight away in savings!

You can also get the bus to Swansea from London. While this mode of transport is slower than the train, it is cheaper. The bus will take you an extra 1 to 1.5 hours but a round trip ticket is only £45 rather than $120!

The bus leaves from the London Victoria coach station at various times throughout the day.

Check prices and book tickets for the bus to Swansea here

The closest airport to the Swansea Bay area is Cardiff airport. If you’re flying from outside the UK it’s probably still easier to fly to some of the bigger airports like London or Manchester and get the train/bus using Omio to find great deals.

You can find cheap flights to the UK on Skyscanner, or by signing up to Dollar Flight Club. They’ll let you know when they find amazing deals on flights. The savings they find every day AMAZE me.

The Swansea Marriott Hotel would win the award for best view were there one. Set right on the sandy shores of Swansea Bay and with most rooms boasting a sea view, this hotel has the best location in Swansea Bay.

The Marriott Hotel’s restaurant serves up huge portions of great tasting food throughout the day. The pie in particular with mash and kale was a huge hit. There’s also a lovely, quiet pool with a sauna that we made use of to relax before dinner at Grape & Olive.

You’d think a hotel this close to the beach would come with a MASSIVE price tag, but the Marriott is even reasonably priced too!

If you’re looking for other options for Swansea Bay hotels check out these highly rated hotels in Swansea Bay below.

Best things to do in Swansea Bay, Wales

There’s so much to do in the Swansea Bay area. During our weekend in Swansea Bay, we stayed in Swansea and visited Mumbles and the Gower Peninsula. I’d love to go back and explore the other areas that makeup Swansea Bay! 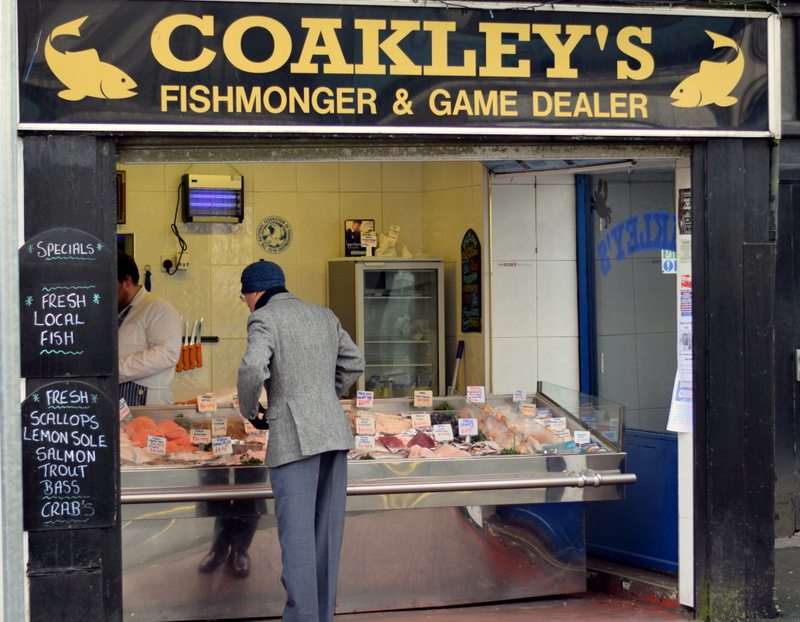 You should absolutely take the bus (the 2A towards Newton), or drive,  to the pretty village of Mumbles about 20 minutes away from Swansea City.

Mumbles is full of charming local stores including cheese shops, butchers and more. If you’re feeling more energetic why not run or cycle over to Mumbles along the coast?!

Walk to coastal path from Mumbles to Langland Bay

Follow the coastal path out of Mumbles and over to Langland Bay. On the way, you’ll get incredible views and can watch the surfers out at sea. If you’re a surfer go ahead and join in, if not then warm up with a hot chocolate or tea (like we did) from one of the stands and cafés nearby.

Lunch at Verdi’s by the sea

On your return back to Mumbles you should stop for lunch at Verdi’s. Verdi’s is a family run Italian Swansea Bay restaurant and ice cream parlour and it’s delicious.

We had focaccias and ice cream but the bowls of pasta and the pizza being served to others looked and the pasta & pizza looked delicious too.

Verdi’s is pretty much on the beach. You can sit outside during summer, or if it’s a bit chilly outside it’s a great spot to watch the waves and dog walkers while you’re inside nice and warm.

It’s not all about the coastal walks in Swansea Bay though. Head to Swansea’s LC waterpark and try your hand at surfing on their indoor surf machine.

The endless wave makes it great for practising your moves and the water is a lot warmer than it would be outside! It’s just a £3 supplement to your pool entrance ticket for a session and is well worth a go!

Go climbing at the LC

If you have enough energy then tackle to 30ft climbing wall at the LC. This is Wales’ highest climbing wall and no experience is required as the wall does everything for you. The auto belay takes care of all the ropes so all you need to do is focus on pulling yourself up. When you reach the top it’s time to abseil back down2 before doing it all over again! 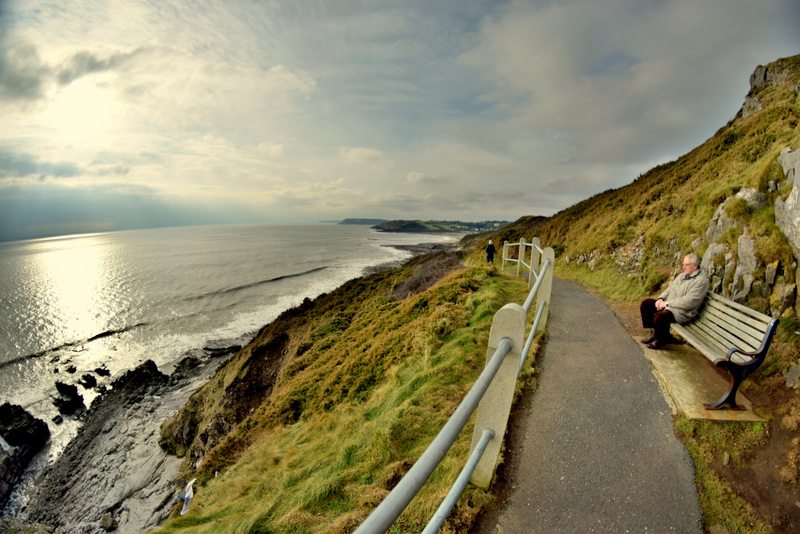 To refuel from our adventures during our weekend in Swansea Bay we did a lot of eating. Here are some of our favourite meals from the trip!

Try Welshcakes straight off the stone at Swansea Market. They’re especially delicious when eaten still warm and sprinkled with sugar! I cannot say the same thing about laverbread…

If you’re after some real Italian food and gelato then make sure to visit Verdi’s (as mentioned above).

Grape and Olive at the top of the Meridian Tower (Wales’s tallest building) is an award-winning restaurant and has spectacular 360-degree views over Swansea, the bay area and across the sea to Mumbles. If you’re in the mood for celebrating something then definitely head up here. Grape and Olive serve delicious, locally sourced food in a relaxed environment and you should definitely book a table for your weekend in Swansea Bay.

On the other side of Swansea Marina and over the bridge is Cafe Twocann. This cafe serves up tasty food including Sunday roasts (perfect for warming up after a blustery beach walk!). Really Cafe Twocann is more restaurant than a café with its mouthwatering menu. Cafe Twocann also sells gifts created by people in the local area if you’re looking for some souvenirs.

We tucked into the Valentine’s Day menu and the scallop with squid ink risotto, in particular, was a big hit.

*My weekend to Swansea Bay was organised by Visit Swansea Bay – THANK YOU for showing me how beautiful this part of Wales is!

Hey Hannah! Thanks for sharing this! Swansea Bay seems to be so peaceful and so beautiful. I'm looking forward to go there, when I'll return to Paris (for now, I'm in Martinique). Have a nice staying in there!