In the surfing world, Portugal is known for its quality surfing putting it at the top of lists for European surf holidays. Besides the fantastic waves for all abilities, there’s great food, beautiful scenery to explore for those rare times the surf isn’t too great and there are loads of laid back surf camps in Portugal where you’ll meet new friends and get tips to improve your technique. Here’s why else Portugal is fantastic for a surf holiday and where to go surfing in Portugal if it’s your first time surfing! 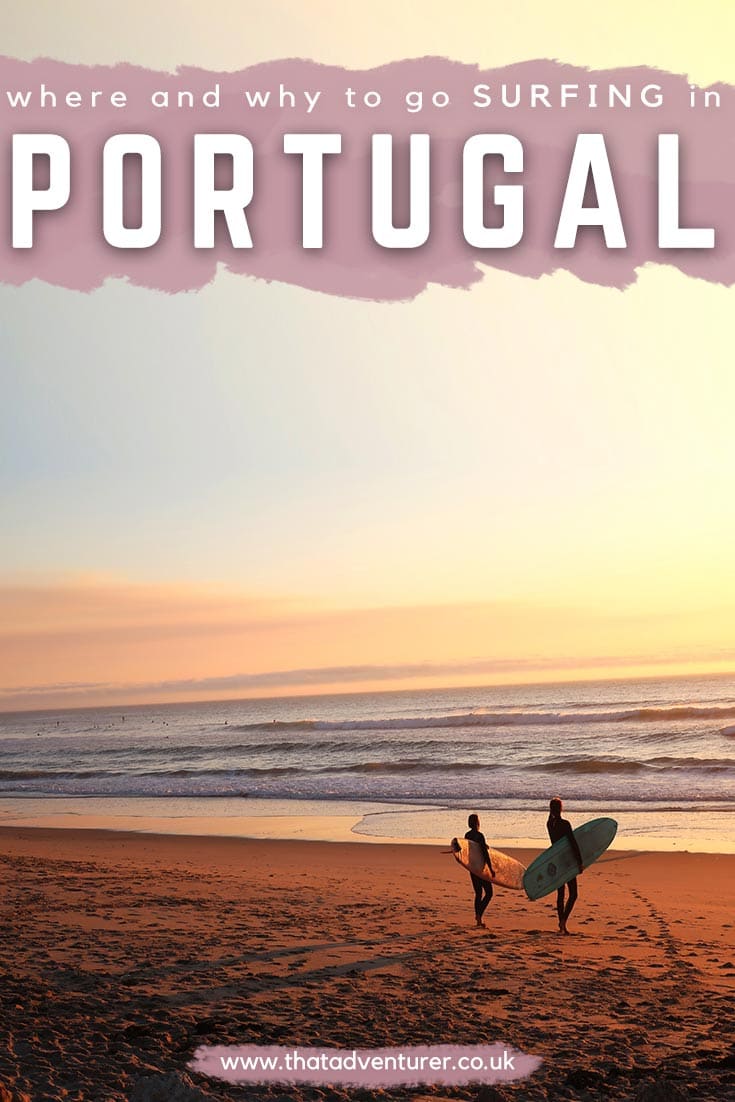 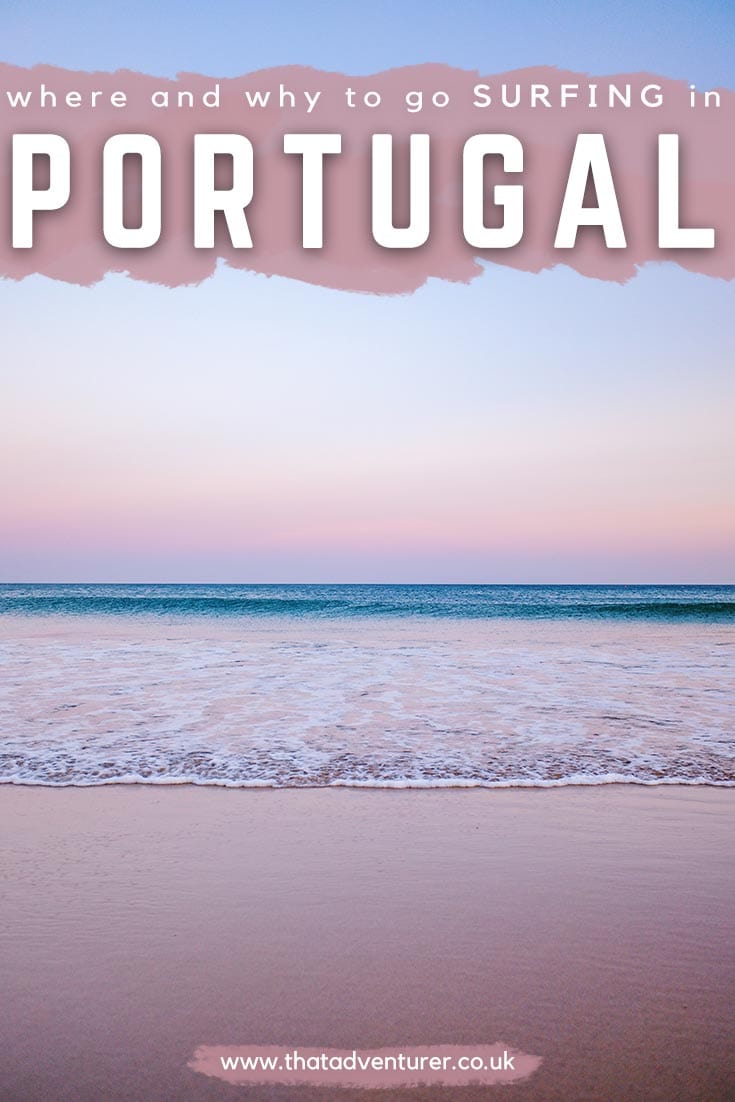 The coastline is huge

Portugal has nearly 1,800 kilometres of coastline, and there are beaches for surfing almost everywhere. From up in the north near Porto, to Ericeira, Nazaré, Peniche, Cascais and Costa da Caparica in the south. There are also a few great Portuguese surfing beaches in the popular Algarve region.

In fact, Portugal has such a big coastline that the furthest you can get from the coast is only about 200km away! You could literally journey up and down the entire coast trying out countless surf spots – now wouldn’t that be a cool adventure?!

Nazare is one of the most popular seaside resorts in the Silver Coast, Costa da Prata, of Portugal. The waves in Nazare Portugal are known for being big, and it’s believed one of the biggest waves ever surfed (30.5 m high!) was there in 2018. The waves in Nazare, Portugal are big due to the presence of the underwater Nazaré Canyon. The canyon creates constructive interference between the incoming swell waves and makes their heights much larger on this stretch of coast. Surfing in Nazare Portugal means surfing on big waves then, but you can also do beginners’ surf holiday in Nazare too.

A holiday to a Peniche surf camp is always a great idea! There are plenty of reasons why a Peniche surf trip is fun; there are great waves and bars and the beaches are pretty uncrowded compared to other European surf spots! Staying at a surf camp in Peniche also means you’re close to cities like Lisbon so you can combine surfing and city culture too.

Ericeira is often seen as the surf capital of Portugal and surfing in Ericeira offers an impressive variety of surf spots in just a few kilometres of coast. In 2011 Ericeira was chosen a World Surfing Reserve, the only one in Europe and Ericeira surf is perfect for beginners too.

There’s surfing in Sagres pretty much all year round! This Algarve surf spot has plenty of surf camps for beginners as well as surf and yoga retreats which are great for stretching out after a day in the surf.

Because of the number of Portugal surf spots up and down the coast, you’re never far from some great surf in Portugal. Even when the surf at the nearest beach to you isn’t great you’re not far from some of the biggest waves in Portugal at the next one!

There are SO many surf schools in Portugal and most are run by local surfers who fell in love with surfing from a young age. They know which beach is the best to head out to depending on the weather. Therefore it’s pretty rare that you won’t be able to get your surf lesson in!

There are loads of surf schools in Portugal. If you want to stay at a Portugal surf camp then you can, but if you’re just after one or two surf lessons that’s also available! Check out these surf lessons in Portugal that’ll teach you the basics during your surfing holiday in Portugal.

The local sardines are the perfect food

If you’re a fan of fish then you’ll love Portugal! With its proximity to the sea you’ll see markets and restaurants serving up some of the freshest fish you’ll ever have. Grilled sardines are a popular option along Portugal’s coastline. These sardinhas asadas are delicious!

In Portugal, where summer temperatures are usually in the mid-20s so it’s hot but not overly so. In autumn and spring, you’ll still get pretty warm temperatures of  15 degrees and even in winter, it’s not much lower!

Better still, some parts of Portugal average 300 sunny days per year! Combined with the consistent surf, those lucky Portuguese are able to enjoy surfing in Portugal all year round!

There are waves for everyone

Summer (April to September) is the best time to learn how to surf. Along with warmer temperatures, summer also brings small-to-medium waves. Winter waves are bigger and should be reserved for those with more experience. As a beginner, best to plan your surf trip when the sun is high and the days are long for warm, safe fun.

You can check out the islands

The Azores and Madeira are pretty much as close to paradise as you’ll get in the middle of the Atlantic Ocean. With colourful marine life, volcanoes, rare wild plants and incredible surf, Portugal’s islands are well worth checking out.  Plus, if the surf does go flat, you won’t be short of adventures with a volcano to climb!

Portugal’s cheaper than much of Europe

Peniche, a fishing community 94km from Lisbon, is a great location to learn how to surf. You can stay in various surf camps in Portugal for a lot less than the rest of Europe!

It’s not just a surf camp in Portugal that won’t set you back much, Lisbon always crops up on lists of the most affordable cities in Europe and outside of the city things are often even cheaper!

Even if you’re not a huge fan of flying I’m sure you could handle this short flight. You can make it to the beaches in under 3 hours!

I’d recommend booking your flights through Skyscanner as they make it super easy to compare flight deals.

One of the biggest international surfing competitions in the world takes place in Portugal, the Rip Curl Pro Portugal. If that doesn’t tell you what a great place for surfing Portugal is then I don’t know what will! The competition, that makes up part of the World Surf League Tour, takes place every October in Peniche and Cascais.

Portugal is home to some of Europe’s most unspoiled nature. In 2015, 299 beaches and 15 marinas in Portugal were awarded Blue Flag status, the most widely recognized standard for water quality, sustainable tourism, safety and general environmental responsibility.