Ever since we moved to Vancouver four years ago (how is it that long already?!) I’ve wanted to do some Deep Cove kayaking and Indian Arm camping. We’d taken out our old Intex inflatable kayaks on the Indian Arm before but had yet to make it over to Twin Islands which is the closest island you can camp on in the Indian Arm. Now we’ve got our inflatabale SUPs, I picked up a few dry bags for our camping stuff and we headed out to from Deep Cove, paddle boarding along the Indian Arm. If you’re looking for free camping near Vancouver here’s another spot to add to your list. Sure, it’s a bit trickier to get to than camping on Mt Seymour, but it’s beautiful nonetheless!

The Indian Arm is a steep-sided glacial fjord that extends north from Burrard Inlet into a mountainous wilderness. The area is protected as the Indian Arm Provincial Park, or to give it its proper name, Say Nuth Khaw Yum Provincial Park.This Deep Cove map shows you where it is in relation to the city.

The easiest way to launch your kayak or paddle board is from Deep Cove. If you don’t have your own paddleboard or kayak you can rent fro Deep Cove Kayak Centre (but make sure to book in advance in summer!).

Read more about Deep Cove kayaking/SUP and the differnet routes you can take.

There are several places you are allowed to camp withing Indian Arm Provincial Park. The closest, and most popular of which, is Twin Islands. Further up the fjord there’s camping at Granite Falls and camping at South Bishop’s Creek. Though I’ve taken a boat up to Granite Falls for the day, I’ve not paddleboarded or kayaked the Indian Arm that far so this post will focus on camping at Twin Islands.

We started our Indian Arm camping adventure on a Friday afternoon just before a long weekend. I knew it would be busy but thought we were getting out early enough to avoid most of the long weekend camping traffic. That’s something I both love and hate about Vancouver – everyone loves the outdoors so much that you know it’s going to be busy on nice weekends which can be annoying, but it’s also cool to live somewhere where everyone values getting outdoors so much! I’d stocked up on snacks, some extra dry bags for our camping gear and we headed to Deep Cove to inflate the paddleboards and start paddling the Indian Arm (packing list further down this post!).

This was the first time we’d attempted an overnight paddleboarding trip and so I wasn’t sure quite what to expect.

When we bought our inflatable paddleboards the year before, we’d also bought a kayak coversion kit for paddleboards. This comes with a seat which you can attach to the metal D-rings on the board and an extra extension for the paddle so that you can kayak with the board. We’d chosen to bring this along for the trip since the paddleboards were pretty laden down with our gear. The wind and waves can get quite strong on the Indian Arm so we didn’t think we’d be standing up much anyway!

With a push off from the pebbly beach in front of Deep Cove Kayak Centre, we were off!

There were plenty of people out in the water, enjoying the sun and we stuck to the coast as we headed out of the cove and into the Indian Arm proper.

With the sun shining it didn’t matter when the waves came over the boards, whipped up by both the wind and the boats passing us; I’m sure it’d be a different story if it was cold and gloomy! the dock at Twin Island

We marvelled at the houses along the water, spotted some seals and then made a dash across the Indian Arm, from west to east, trying to avoid the worst of the boat traffic and make it to Racoon Island.

From there is was a short paddle north over to Twin Islands and luckily some calmer waters since not many boats were in the water between the two islands.

We made it to the dock on the northern Twin Island just over an hour after we set off. 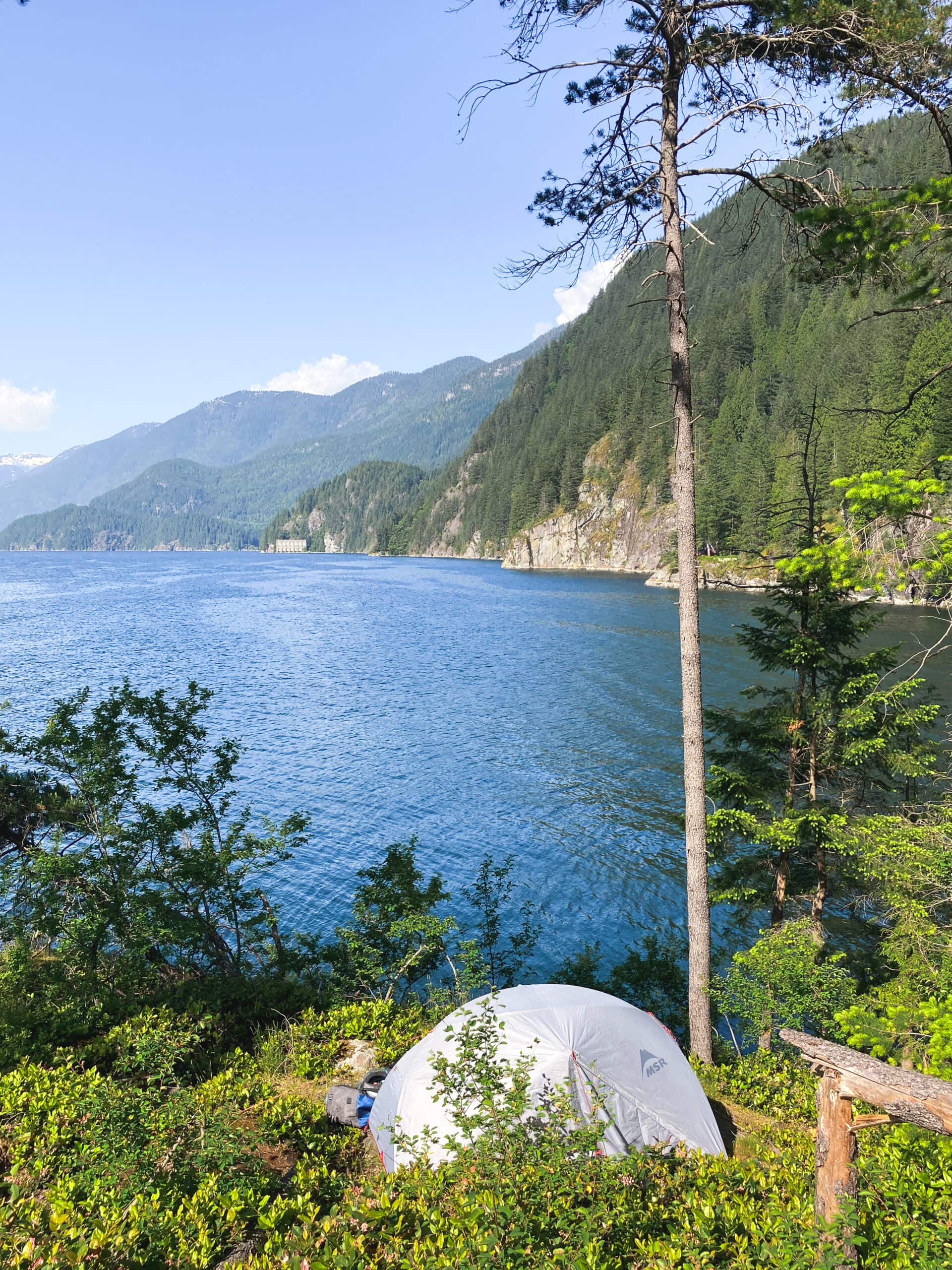 As the name suggests, there are two islands making up Twin Islands and they’re super close to each other. The northern one is the one you’re allowed to camp on; there is no camping on south Twin Island allowed.

There’s a small dock on the eastern edge of north Twin Island where you can land your kayak, SUP or boat and unload your camping gear. There was a family there when we arrived who were also looking for camping spots for the night but said they’d not had much luck.

We pulled our paddleboards out of the water and put them out of the way on the dock while we went to search for a spot to camp.

There are 20 elevated wooden camping platforms on north Twin Island and all were in use by the time we got there at 3pm on a Friday. We carrie don scouting the island and found a small spot that looked as though it had been camped on before at the northern end by the lighthouse.

If you’re camping midweek and have your choice of spots, I’d highly recommend heading to the northern end as that’s where you get great ocean views! The first tent pads you come to are in the middle of the forest and offer no views at all.

After setting up camp, a swim and some snacks we relaxed in the peace and quiet.

That was until a larger group of boys turned up and started playing their music (which they continued to do until about 3am!). 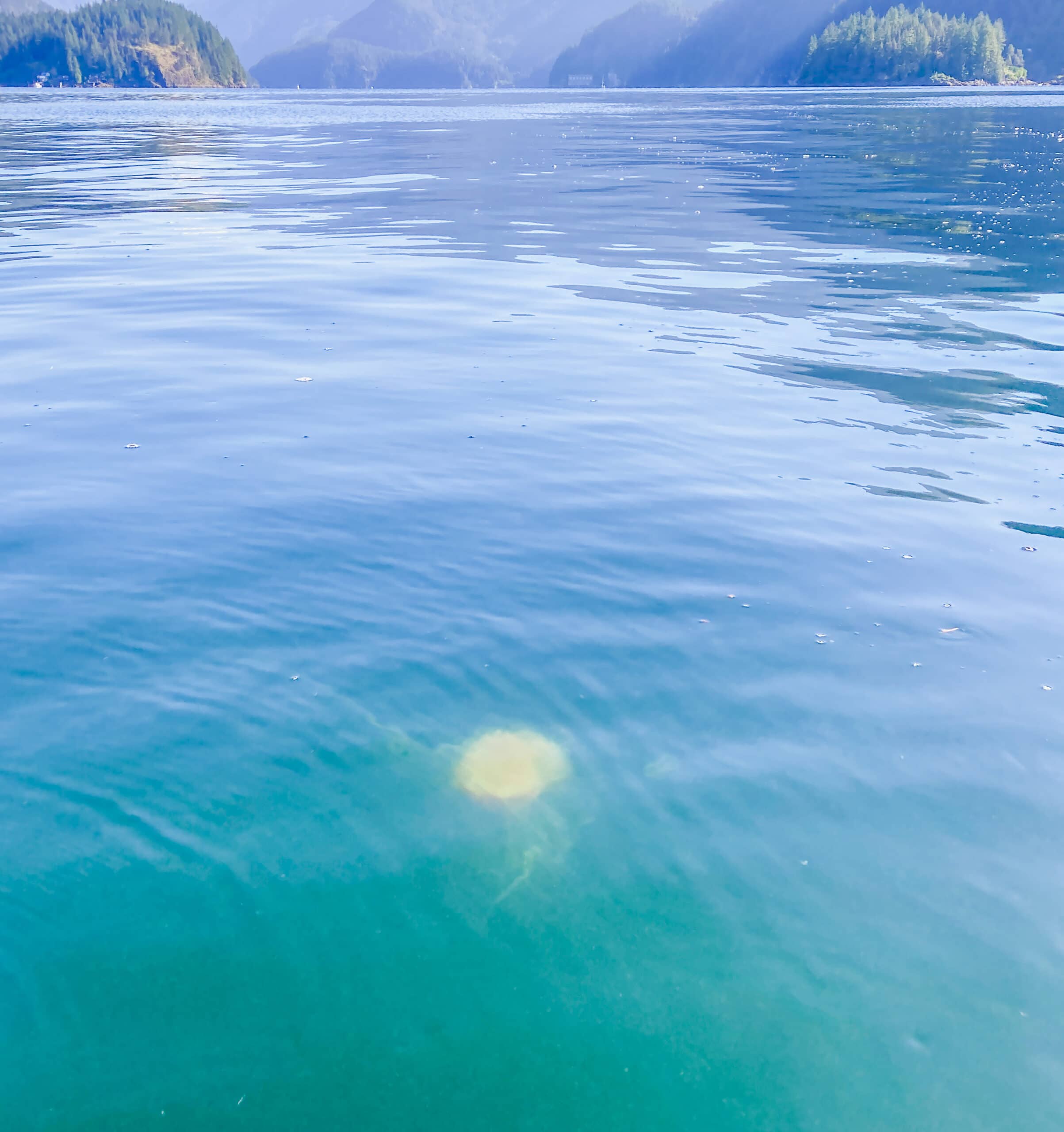 We’d checked the tide times and the weather for our paddle back and knew that we’d either have to leave around 8am, or wait until after dinner for the tide and winds to be in our favor. We hadn’t slept much the night before but we opted for rising early to beat the winds.

The paddle back was one of our favourite parts of our trip and experience of Indian Arm camping!

There were hundreds and hundreds of moon jellies and then some lions mane jellies with their extremely long tentacles floating behind them!

We slowed our pace down to marvel at the jelly fish as they floated past us.

We also spotted a couple of seals as we neared the launch in front of Deep Cove Kayaking one of which seemed quite interested in watching us go by.

Back in Deep Cove it was time for breakfast and coffee while we waited for the boards to dry off so we could pack them up and return home, ready for the next long weekend adventure! 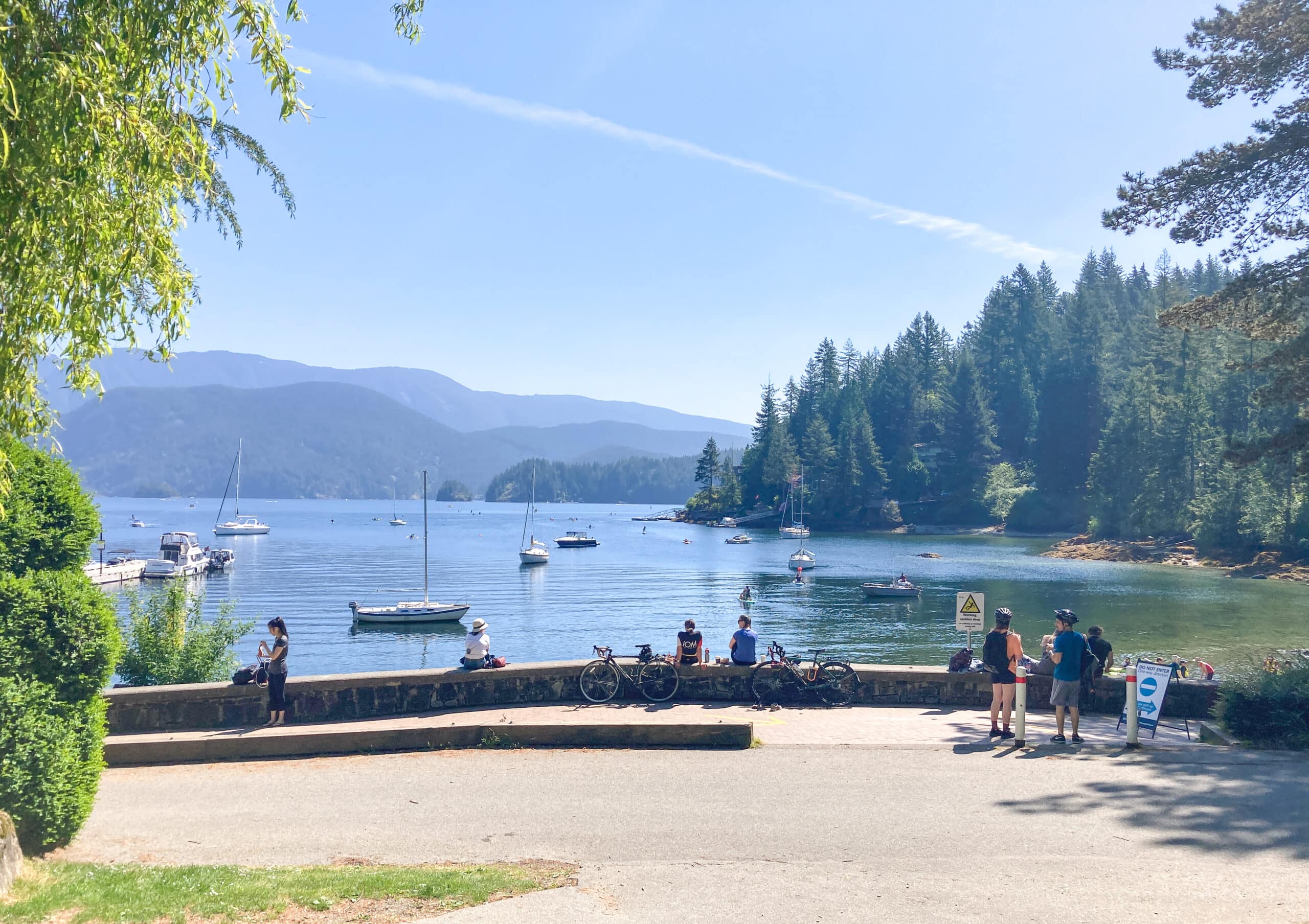 If you’re planning a Deep Cove camping trip, here are a few things you should know before you go kayaking at Deep Cove. They’ll help protect both you and the beauty of the area: