I can hear the rain on the roof of my cottage in the forest. It really is making that pitter-patter sound. The fire is whirring away (not crackling because it’s electric). A deer walked straight past my window earlier and didn’t bat an eyelid. A delicious breakfast complete with my own cafetière was brought to my room and I’m feeling calm – so calm – after having had two yoga sessions in the last 24 hours (and that’s coming from someone who doesn’t really practice yoga).

I’m spending this weekend by myself at Nectar Yoga B&B on Bowen Island. A place I’ve had my eye on for a while now. It’s even better than the photos make it look and, whilst I love my West End apartment, the Forest Cottage is dreamy.

I spent the last few hours roaming around Bowen Island on foot. I saw the ice still sitting on Killarney Lake, climbed to Dorman Point and looked out upon West Vancouver.

Read the best things to do on Bowen Island here

The Accommodation at Nectar Yoga B&B

There are three options for people wishing to stay at Nectar Yoga B&B. There’s The Loft which can sleep up to four people and is the biggest space. The Forest Cottage which sleeps up to two and is where I stayed, and a third option is the Garden Suite which is only available on request.

Since I stayed in The Forest Cottage I’ll be focusing on that in this Nectar Yoga review. 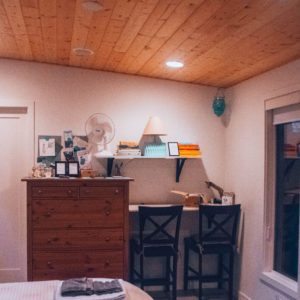 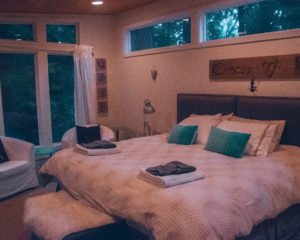 The Forest Cottage was built off-site and delivered by boat to its new home in the forest. It’s in the style of a beach hut and has a foyer for coats and shoes, a toilet, a large bedroom/living space and a deck with an outdoor shower.

There’s absolutely everything you could ever need for a weekend stay in The Forest Cottage. There were hairbands in the bathroom, coffee mugs and water bottles, games, DVDs (and not even really old ones!), and teas too.

My absolute favourite things about the Forest Cottage was the view of the forest from the bed and the outdoor shower. 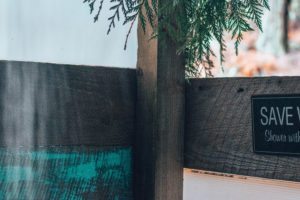 I’d been slightly worried that heading out to the shower at the beginning of January would be a freezing experience.

However, I needn’t had worried. The shower got super hot and it just felt amazing to be outside, but hidden away in the forest too. 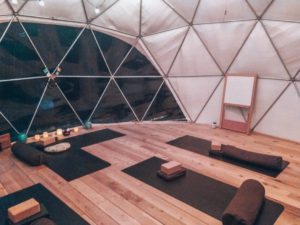 I’m not someone who practices yoga regularly (although I’m trying to be). I enjoy it when I do it but I just don’t make time for it. However, since becoming a dog walker and spending 6+ hours a day cycling and walking I’ve found I really, really need to stretch more.

Since Thom was heading back to the UK I decided to treat myself to a stay at Nectar Yoga B&B and a solo trip to Bowen Island. I definitely don’t regret it.

I had three yoga sessions during my two night weekend stay at Nectar Yoga B&B.

The first was shortly after my arrival and focused on relaxing and unwinding: perfect for a Friday afternoon.

The other two were on the following two mornings. These were led by the funniest yoga teacher I’ve ever come across. We practiced yoga for one and a half hours, saw the deer grabbing their breakfast outside the Yoga Dome and shared a few laughs.

If you’re put off yoga because you’re not really into the spiritual side of it (I’m not, I just want to stretch), then don’t be afraid of trying Nectar Yoga B&B. When you book your room you get a chance to say the types of yoga you like and your level. I found the yoga practices then fit just right for me. 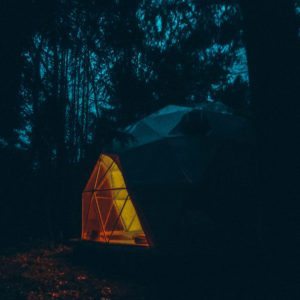 This is by far the coolest place I’ve ever done yoga (& probably will be in a very long time!). Nectar Yoga B&B has it’s very own geodesic dome.

In the winter it’s kept heated and there are plenty of blankets on hand should you get cold during your savasana. It’s awesome being able to see out into the forest while you practice! 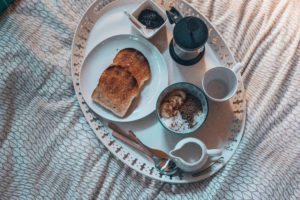 Since the second ‘b’ in B&B is breakfast it’s only right I speak about that in this Nectar Yoga B&B review!

Nectar Yoga B&B deliver breakfast right to your room after you’ve finished yoga. The menu varies, but it’s always vegetarian and mostly local and organic. Oh, and it’s delicious after you’ve worked up an appetite doing your yoga.

On the first day I was served some yoghurt with coconut, cinnamon, sugar and bananas, some toast and jam with my own cafetière of coffee. The second day consisted of waffles with maple syrup. Yum!

Whilst there isn’t a kitchen in the Forest Cottage (there is in The Loft), it’s pretty easy to pick up some bits and pieces in the centre of Bowen and bring them back for a picnic-y dinner in your room.

How to get there

Getting to Bowen Island from downtown Vancouver is super simple. I’d highly recommend staying at Nectar Yoga B&B but if you can’t then Bowen Island makes for a great day trip too.

You can then catch the bus that’ll be waiting just up the road from the ferry terminal to Nectar Yoga B&B.

Just tell them where you’re going and they’ll drop you right off outside. The buses on Bowen Island are the same network as in Vancouver. If you have a Compass card you can use that to pay.

If you’re going to Nectar Yoga B&B by car follow the BC 99 Northbound until you get to Horseshoe Bay. Catch the ferry (about $35 for a standard vehicle), and then drive down Miller Road until you see the ‘yoga’ sign.

How to book Nectar Yoga B&B

You can book your stay at Nectar Yoga through their website. The forest cottage starts at $165 per night and includes breakfasts and yoga sessions.

This is an amazing house for a getaway to have some quiet time and enjoy Bowen Island. The location at Hood Point with an intoxicating view of Howe Sound is really something. Jennifer was a great hostess from start to finish. I would really recommend a stay here.

OneDayTop has recently posted for Travel : U.S. Veterans Affairs Official Strides Down in The Midst of Movement Embarrassment