Looking for things to do in Holbox? Have a look here! 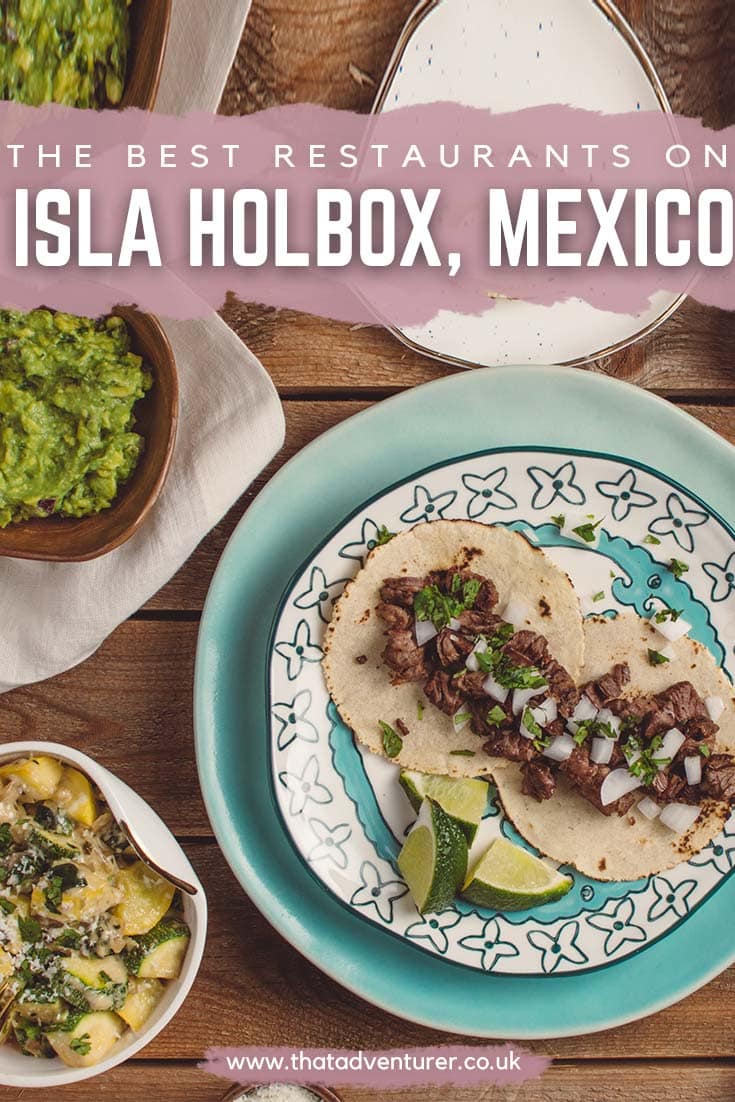 Below are some of the best Isla Holbox restaurants we ate at. Barba Negra for tacos and cocktails was by far my favourite, so if you only go to one place then definitely go there. I also strongly recommend staying away from Casa Nostra Roof Restaurant, the location is quite nice but the food was a big disappointment and one of the most expensive meals we had while in Mexico.

I’ve also added a few more places that we didn’t get to try but that come strongly recommended!

One morning we wanted a lighter breakfast and headed to Tierra Mia as I’d heard about their coffee. Not only was their coffee delicious, but their bagels were too. That actually reminds me I need to recreate the combination I had of cream cheese and sundried tomatoes this weekend!

It’s a pretty space inside and you can tell it’s one of the newer places catering to tourists. If you really like their coffee you can buy packs to take home too.

Another great place for breakfast in Holbox is El Cafecito. This was just around the corner from our hotel and their menu offers some Mexican classics, as well as lighter options of fruit and yoghurt. The prices were reasonable too.

We came here in search of lunchtime tacos but found a more complete meal of rice, meats and salad. Turns out tacos were a morning thing here. Either way, we got a massive plate of food for not a lot of money and it was super tasty too. It’s a bit off the main drag but worth going to, especially if you’re travelling on a budget.

I can’t remember the name of this place and it had just opened the day we went but we had a great brunch here! For around $100MXN we got coffee, fresh fruit and a choice of a main meal including sandwiches or chilaquiles. The manager was super friendly and the food delicious. 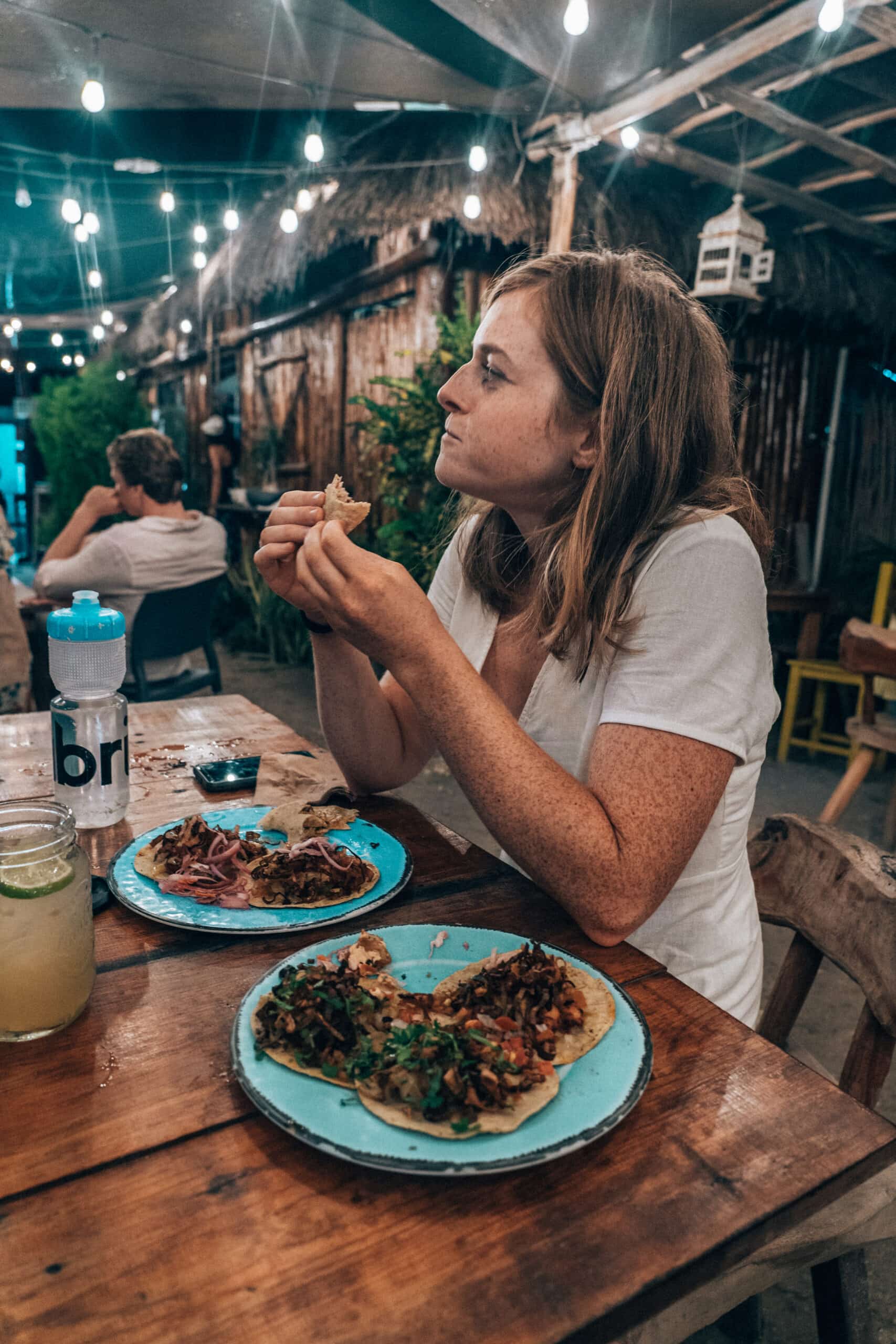 We went to this place for dinner on our first nice on Holbox and LOVED IT. These were without a doubt the best tacos we had during our week in Mexico.

Barba Negra is in an area that has several stalls selling different types of food. When we visited only the cocktail place and Barba Negra were open but that suited us fine!

There was a variety of meat, veggie and even vegan options in this Holbox restaurant and the atmosphere was super cool too. A couple of guys came in and played some live music, there was a bar serving cocktails that were delicious and we just loved it.

We’d walked past this place a few times during our stay on Holbox and I’d assumed it would be super expensive. On the last day, we decided to give it a try and were pleasantly surprised to find the prices extremely reasonable.

This restaurant in Holbox is like what you’d expect to find in Tulum with swinging chairs and full of tourists. It’s always busy so go early if you don’t want to wait.

They have juices, smoothie bowls, vegan options, fruit platters, and more. Our breakfast here was delicious and we were stuffed by the end!

Hot Box is something of an Isla Holbox institution and everyone says it’s the place to party. We went here for lunch so didn’t experience the partying side of this bar but would recommend it for a light lunch or dinner before some partying. It’s a bit more expensive than other places for what you get, but if you’re a solo traveller in Mexico it’s a great place to meet people and experience Holbox nightlife.

One of my favourite restaurants in Holbox, Los Peleones Holbox was Thom’s pick so he could try their make of beer. Their coconut stout sounds strange, but goes down easily and it really does taste like coconut!

The menu is full of Mexican classics and there’s a fun theme to it too.

One of the food items that Holbox has become famous for (but that we didn’t get around to trying) is lobster pizza. Yes, that’s right. There are lots of places on the island that sell lobster pizza nowadays. However, if you’re looking for where to get lobster pizza in Holbox, the place that’s recommended most often is Roots. Roots only serve wood-fired pizza and they know what they’re doing.

As you’d expect for a pizza with a lobster on, it’s not the cheapest meal you’re going to get ($32US). However, it’s said to be pretty darn tasty. Let me know if you’ve tried it! Besides the lobster pizza, there’s one topped with Cochinita Pibil (slow-roasted Mexican pork) and tasty cocktails. 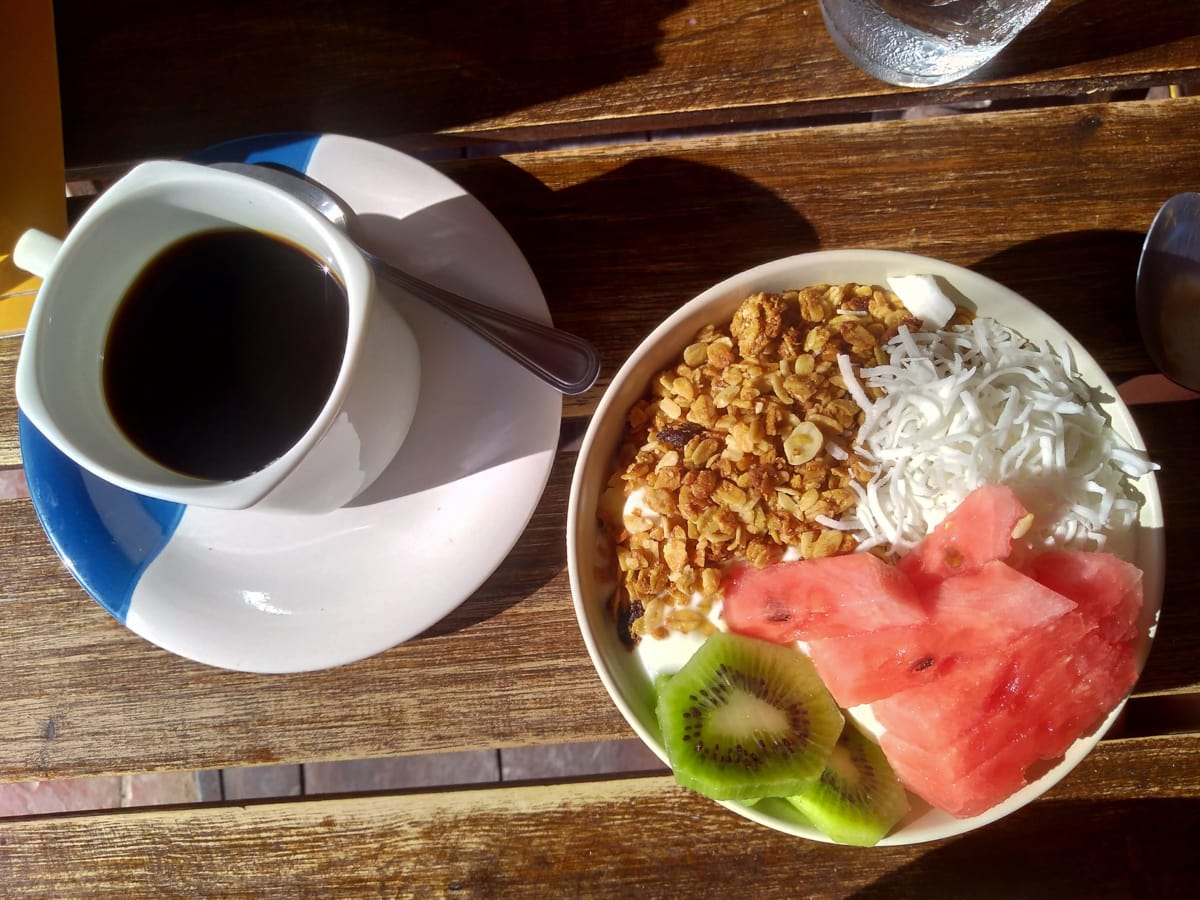 TacoQueto is the classic hole-in-the-wall Mexican restaurant. While not so much a hole in the wall and more of a full-size restaurant nowadays, TacoQueto has retained its quality and make delicious and cheap Mexican tacos. The tacos al pastor are always a big hit!

This small cafe was closed during our time in Isla Holbox as I discovered one morning when I had my heart set on their highly recommended pastries!

The bakery on Holbox is run by a French man and not only do they make pastries but do larger breakfasts such as omelettes and bagels too. The coffee is supposedly great too and they offer plenty of juices too.

Another place that gets great reviews is Las Panchas. This place seemed to have rather sporadic opening times which was a shame as it was right next door to our hotel so I would’ve loved to check it out!

It doesn’t look like much but it’s usually full of locals and it’s just a couple of steps from the beach They serve fresh and tasty ceviche which is reportedly the best on the island.

Milpa is about more than just the food, it’s the experience of dining there as a whole. This family-run restaurant is definitely the place to go if you’re celebrating a special occasion. The service isn’t renowned for being the quickest (or the best), but the food is a big step up from what you’ll find elsewhere: especially in terms of presentation.

And finally, another great restaurant on Isla Holbox is El Chapulim. This restaurant does things very differently to almost every other restaurant you’ll have been to. They don’t have a menu and there aren’t many choices when you dine there, you’ll get whatever was fresh that day.

The restaurant is run by award-winning Mexican Gourmet Chef, Erik Winckelmann and it’s a popular choice for restaurants on Holbox. The kitchen closes when the food runs out (usually before 9 pm), so make sure you get there early. It’s cash only too, so make sure you’ve plenty!

Where is Isla Holbox? 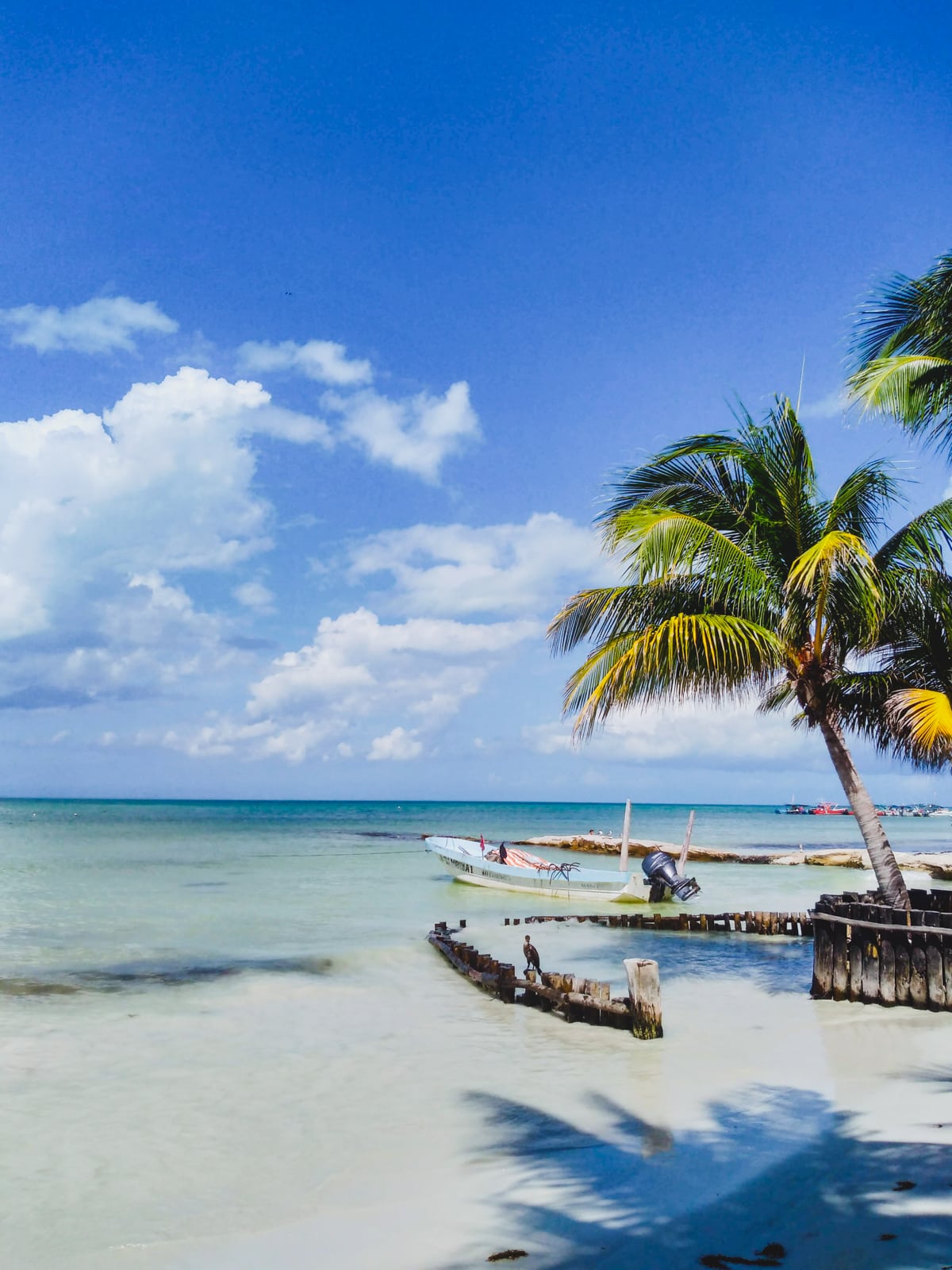 Wondering where Holbox is? The island of Holbox (pronounced like “Holbosh”) is in Mexico on the Yucatan Peninsula in the state of Quintana Roo. This area is a popular tourist and holiday destination thanks to the warm Caribbean Sea and beautiful beaches (as well as the thriving all-inclusive scene in Cancun and Playa del Carmen). It’s one of the best islands in Mexico and I’m hoping it manages to retain its charm as tourism to the island increases.

Isla Holbox is about 2 hours north of Cancun and Playa del Carmen, and it takes about 2.5-3 hours to get to Isla Holbox from Tulum.

Since it’s an island and there are no bridges, you’ll also need to get a short, 20-minute Holbox ferry ride from the port town of Chiquila, Mexico.

How to get to Holbox

There are a few options you can choose from when it comes to travelling to Isla Holbox. If you’re travelling on a budget, the cheapest option for getting to Holbox is going to be to take a public bus from whichever city you’re in, to the ferry port of Chiquila. Below I’ve outlined the main ways to get to Isla Holbox, so whether you’re wondering how to get from Cancun to Isla Holbox, or from Tulum, I’ve got you covered!

Take a look at this post for more details on how to get to Holbox Island from Cancun, Tulum & more.

Where to stay in Isla Holbox, Mexico 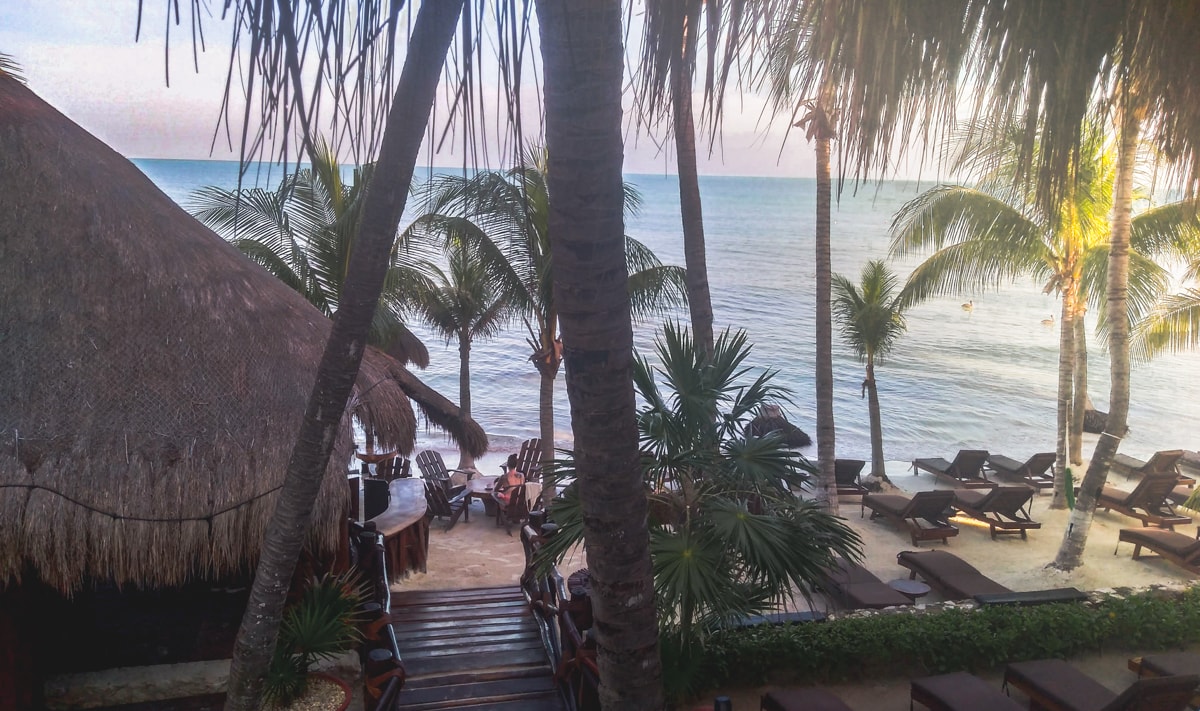 View from our room at La Palapa

We stayed at Hotel La Palapa which was right on the beach. We could hear the waves from our room and only had to walk a few steps between our room and the beachfront where we spent a lot of our time. I’d highly recommend it if you’re wondering where to stay in Holbox.

When we visited in October, the rooms were only around $100 a night, but we saw that in peak season on Isla Holbox they can be 4 times that amount, therefore it’s not ideal if you’re travelling on a budget.

I’ve listed a few more options for Isla Holbox accommodation, including budget hotels in Holbox, below.

If you’re looking for a boutique hotel on Holbox, this one is a great option. Breakfast is included and there’s a great pool area making it one of the best hotels in Holbox Island.

For those looking for more Holbox luxury hotels, try Las Nubes has bungalows and suites with ocean views and the jungles backs on to it. It’s a bit far out of the town so you’ll rely on taxis to get between the two, but it’s perfect for a relaxing break.

his budget-friendly hotel in Holbox is very stylish with a beautiful pool.

If you’re looking for something different, try Frequency on Holbox. This hotel has rooms that are in big geometric domes so it’s like you’re glamping.

One of the most popular Isla Holbox resorts, Casa Tortugas is a family-run hotel with an outdoor pool, hot tub, hammam and hut-style rooms. It’s right on the beach and prices included breakfast.

There are also a growing number of Airbnb in Holbox.