On our recent trip to Mexico’s Yucatan Peninsula, we travelled to the beautiful, peaceful island of Isla Holbox from Tulum. I’d heard it’s supposed to be “the new Tulum” and so I was keen to see the difference (spoiler alert: we both much preferred it to Tulum). I’ve also heard it’s quieter and prettier than Isla Mujeres if you’re looking to compare Mexico islands.

We spent 3 days relaxing by the beach, swimming in a hammock on our hotel balcony, eating tacos and chilling out. It’s rare that we have a holiday where we plan to do nothing, but for the first time in as long as I can remember I relished doing nothing.

If you’re after something similar then I highly recommend a trip to Isla Holbox for that! Since returning to Vancouver, friends have asked about how to get to Isla Holbox, particularly travelling from Cancun to Isla Holbox, or to or from Tulum.

If you’re planning to travel to Holbox, and are wondering how to get from Cancun to Holbox, or Tulum to Holbox, use this (hopefully) helpful guide to help you plan your trip to Isla Holbox. 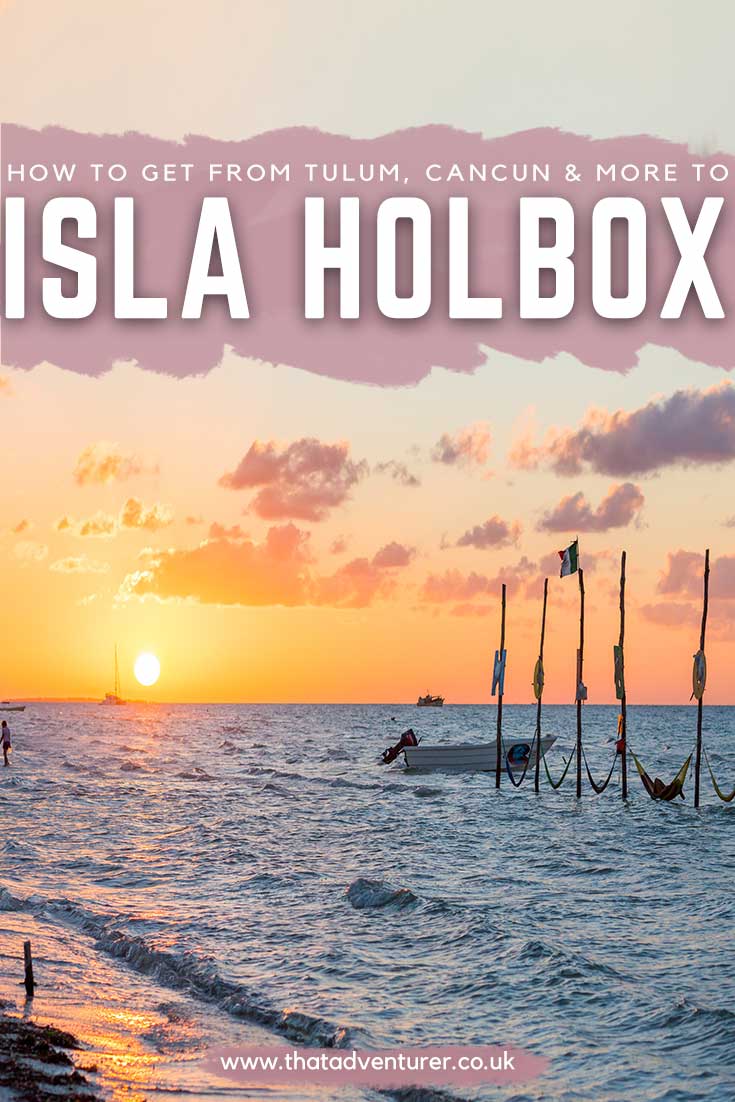 Where is Isla Holbox?

First things first, where is Isla Holbox? Isla Holbox (pronounced like “Holbosh”) is in Mexico on the Yucatan Peninsula. This area is a popular tourist and holiday destination thanks to the warm Caribbean Sea and beautiful beaches (as well as the thriving all-inclusive scene in Cancun and Playa del Carmen). It’s one of the best islands in Mexico and I’m hoping it manages to retain its charm as tourism to the island increases.

Isla Holbox is about 2 hours north of Cancun and Playa del Carmen, and it takes about 2.5-3 hours to get to Isla Holbox from Tulum.

Since it’s an island and there are no bridges, you’ll also need to get a short, 20-minute ferry ride from the port town of Chiquila, Mexico.

This map shows you where Isla Holbox is located in relation to Cancun, Tulum and a few other popular destinations in the Yucatan Peninsula. This Holbox Island map also has some of the top things to do on the island from my ‘Best things to do on Isla Holbox” blog post. 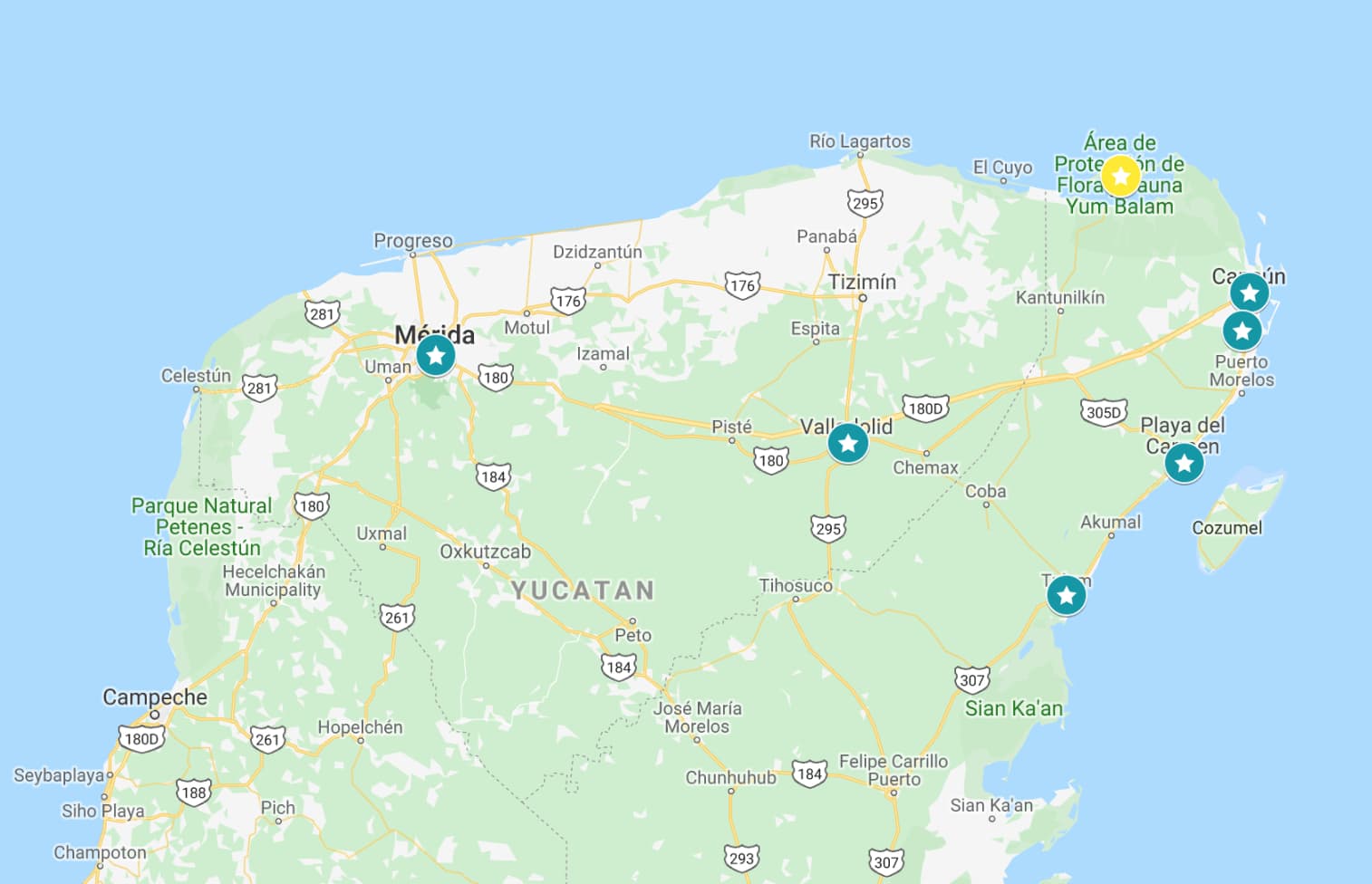 How to get to Isla Holbox

There are a few options you can choose from when it comes to travelling to Isla Holbox. If you’re travelling on a budget, the cheapest option for getting to Holbox is going to be to take a public bus from whichever city you’re in to the ferry port of Chiquila. Below I’ve outlined the main ways to get to Isla Holbox, so whether you’re wondering how to get from Cancun to Isla Holbox, or from Tulum, I’ve got you covered!

While it’s not very common, and very expensive, it is possible to fly to Holbox and there’s a small Isla Holbox airport.

The most common route when it comes to flying to Holbox Island is to fly to Cancun and then take ground transport from there. Flights to Cancun are usually pretty cheap from major North American cities, we flew from Vancouver, BC to Cancun for around $200CAD each (thanks to these money-saving tips!).

Cancun is the closest airport to Isla Holbox and the one most people will fly into. And, you’ll be happy to hear, getting from Cancun to Holbox Island is super easy! Check out the next section below to find out how to get to Holbox from Cancun airport.

The way we travelled to Isla Holbox from Tulum and then the bus from Chiquila to Cancun airport at the end of our trip was by bus too. We used ADO buses in Mexico simply because it was easy to book online in advance with them.

This meant we didn’t need to worry about the bus being full, and missing our flight. It was especially useful when going from Tulum to Isla Holbox as there’s only one bus a day doing that route!

When booking your route online, you’ll want to set your destination as Chiquilá, which is where the ferries to Isla Holbox go from. You needn’t worry about syncing the bus times with the ferries as the ferries set sail every 30 minutes.

ADO buses are all pretty new, have comfortable, reclining seats and seatbelts, a washroom on board and some have televisions too. It’s by far the cheapest way to travel around this area of Mexico.

Below are some approximate costs of buses to Isla Holbox from cities in the Yucatan. You can see the full schedule, fares and book tickets on ADO’s website. (Prices checked January 2022).

NOTE: Be sure to double-check whether you’re booking tickets to/from the airport or Cancun town when you’re looking at how to get to Holbox from Cancun.

How do you get to Isla Holbox from Isla Mujeres?

For those of you doing a little island hopping and want to go from Isla Mujeres to Isla Holbox or vice-versa, you simply need to go you’re touring the islands in Mexico and are also visiting Isla Mujeres

You can also arrange for a transfer for getting to Holbox from Cancun airport. These are usually more expensive than getting an ADO bus but if your flight is leaving at a strange time, or getting the bus would mean you’d have to spend hours in the airport then they can be a great option. It’s also worth looking into getting a Holbox shuttle if you’re travelling as a group, as it may work out cheaper than several bus tickets. This form of transportation from Cancun to Holbox is ideal if you’re travelling with kids too.

I’d recommend a Cancun to Holbox shuttle over looking for a taxi from Cancun to Chiquila – it pretty much ends up being the same things anyway.

How to get to Holbox Island by car

If you’re planning to stay in Mexico longer and Isla Holbox isn’t your only destination, it may be worth hiring a car for the duration of your stay. While you can’t drive the car in Isla Holbox (there aren’t any roads and golf carts are the only motorised vehicle), you can drive it to Chiquila and park in one of the many multi-day carparks there.

It takes about 2 hours to drive to Chiqulia from Cancun and Tulum and the parking lots in Chiquila cost around $100MXN a day.

The ferry to Isla Holbox

The 9 Hermanos ferry company is the company that runs on the half-hour, and Holbox Express Ferry runs on the hour. It’s useful to know this so that you buy the right ferry ticket when coming off the bus, or from your car.

Either way, you’re not going to have to wait long for a ferry to Holbox at all!

The ferry from Chiquila to Holbox starts at 6 am and finish at 9.30 pm. They cost $220MXN per passenger (as of January 2022), regardless of which company you end up using. You can see the Holbox ferry schedule in both directions here. Remember to check the Holbox ferry times for your return trip, especially if you’ve got a plane to catch!

Oh, and keep your eyes open when getting to Isla Holbox on the ferry, we saw a flamingo!

Getting from the port in Isla Holbox to your Holbox accommodation 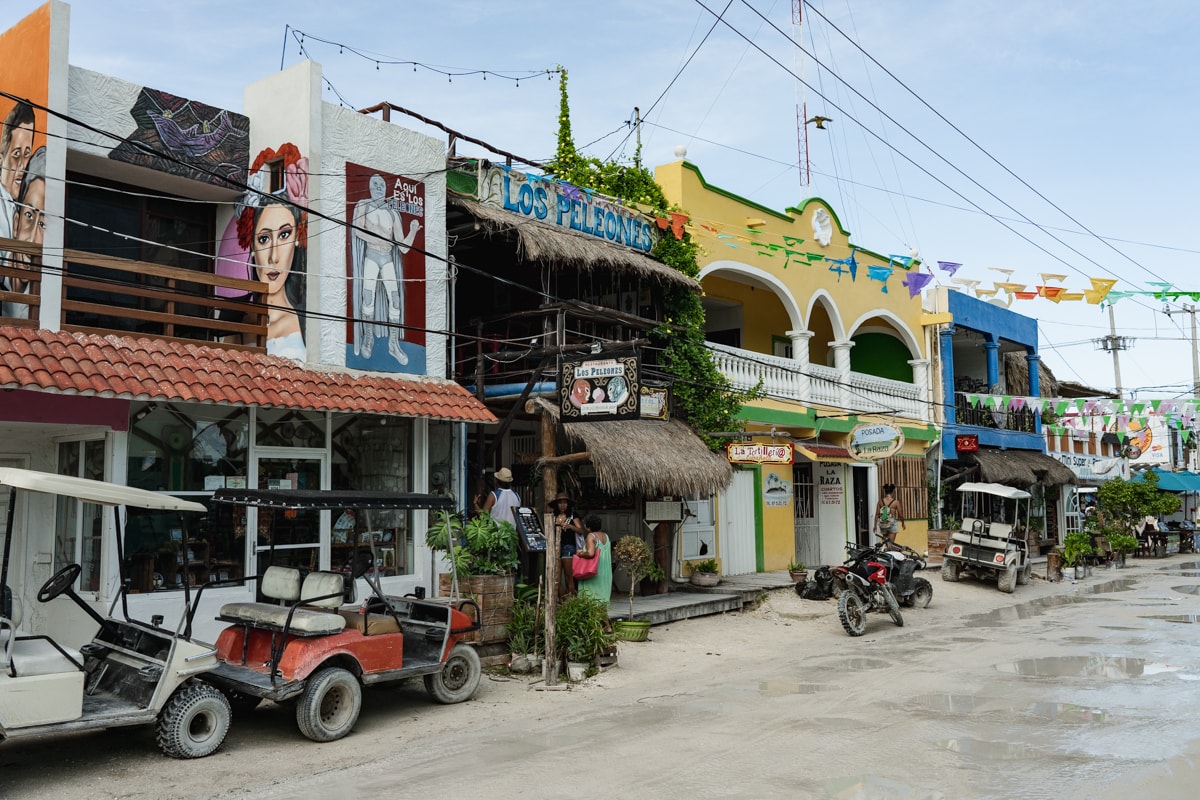 one of the main streets in Holbox

There are no cars on Isla Holbox so you won’t find a standard taxi to take you to your hotel on Isla Holbox. Instead, there are golf carts and they’ll line up at the ferry dock waiting for the ferries to land. It was nice that we weren’t swarmed by taxi drivers trying to convince us to go with them, instead it worked like a taxi rank usually would, with you just taking the next in line.

Our accommodation was on the main Holbox beach on the opposite side of the island and the taxi on Holbox cost us $50MXN (2 people and 1 big bag). Most of the Holbox resorts are on the far side of the island from the ferry but if your accommodation is closer to the ferry terminal, it’s very easy to walk as the island is very small. However, bear in mind that the roads are sand (not tarmac), and if it’s been raining they’ll be flooded so, if you have a wheely suitcase, it won’t be ideal.

Best things to do in Holbox

I have a more complete list of what to do in Holbox but below are my pick of the top 5 Holbox activities which should get you started if you’re looking for things to do in Isla Holbox.