Whilst on holiday in Almuñécar, southern Spain, we decided to take a break from the beach for a day and make a day trip to Gibraltar.

Gibraltar is in southern Spain but has been owned by the British for longer than the United States has been American. Affectionately known as “The Rock” (thanks to the massive Rock that casts shadows over Gibraltar), it takes its Britishness to whole new levels. You’ll see red phone boxes, fish and chip shops and old seaside hotels that look like the more tumbledown parts of northern sea towns in the UK.

How to plan a day trip in Gibraltar

First things first, it depends on what part of Spain you’re coming from. We were coming from Almuñécar which is to the east and so getting to Gibraltar meant about a three hour drive each way. Some of the other well-known cities you might be coming from are Malaga (just under 2 hour’s drive), Cadiz in the West (about 1 and a half hours) or Marbella (about an hour’s drive).

The best way to get to Gibraltar is to drive to near the border and walk across from there. Visiting Gibraltar by car isn’t something I recommend and I’ve explained why in more detail below.

Should you drive into Gibraltar?

When it comes to the question of how to go to Gibraltar you might be considering driving. In short, this probably isn’t the best idea, especially if you’re only planning to spend one day in Gibraltar.

When we visited back in 2013, Gibraltar had been in the news a lot for its disputes with Spain. Luckily we’d done a bit of research the night before and discovered parking the car outside Gibraltar would make life a lot easier. It’s the border crossing that can make going to Gibraltar from Spain a bit of an ordeal, but getting into Gibraltar on foot by walking across the border is usually pretty painless.

There are plenty of signs to direct you into the centre of Gibraltar. Oh, and there’s a massive rock that kinda guides the way too. The walk from the border crossing is about 30 minutes.

If you park in Gibraltar itself you’re very likely to get stuck in traffic for three hours or more on the way out! So, while you can visit Gibraltar by car, I’d recommend you don’t. The drive to Gibraltar and then crossing on foot or bus avoids them.

How to get to Gibraltar from Spain

It’s very easy to get from Spain to Gibraltar. If you’re not driving then you can also get the bus to Gibraltar from most major cities in Spain. I like to organise my European travel through Omio as they make it super easy to see the dates, times and prices beforehand.

You can get a return bus ticket to Gibraltar from Malaga for about £25.

Getting around Gibraltar on a day trip

If you prefer not to walk from the border crossing you can take a bus to the city centre. Look for a red bus and buy a day ticket which costs 3.50 Euros.

You could buy a single ticket but that costs 2.40E. And chances are you’ll probably want the bus back to the border even more after a day full of adventures in Gibraltar!

What to pack for a day trip to Gibraltar

If you’re visiting in summer (as we did) the chances are it’s going to be super, super hot. We hiked up the Rock in Gibraltar and sweated buckets. Here are a few essentials you’ll need to pack if you’re planning a day trip in Gibraltar.

What currency do they accept in Gibraltar?

As Gibraltar is a British overseas territory the main currency is the Pound Sterling. Most businesses will accept euros but your change will most likely be given back in euros.

These Gibraltar tours are great for solo travellers or if you prefer to have things organised for you during day trips to Gibraltar. It takes the effort out of planning what to do in Gibraltar for yourself too (although that’s one of my favourite parts!). They also have tours of The Rock of Gibraltar as a full-day excursion.

What to do in one day in Gibraltar

For such a small place there’s plenty to keep you entertained for a day trip in Gibraltar. Here are some of the things to do in Gibraltar that we did, as well as some extras! You might not be able to fit in all these activities if you’re only travelling to Gibraltar for one day, but you can make a pretty good dent in them!

Go To The Top Of The Rock Of Gibraltar 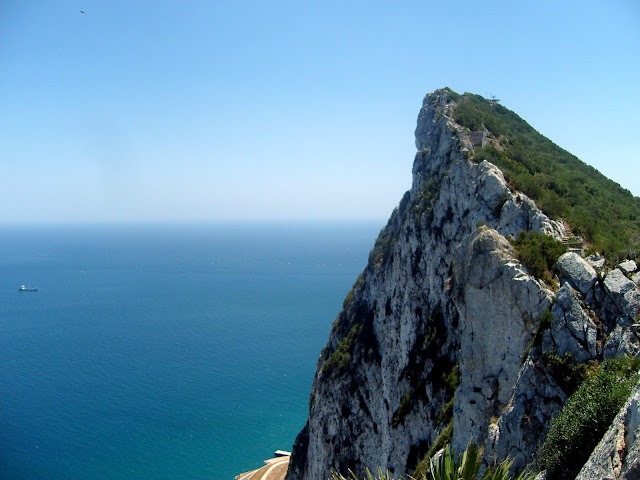 One of the things you must do on a day trip to Gibraltar is to make it to the top of the rock. You can drive, get the cable car or hike. Since you’re reading my blog I’m going to assume you like hiking! In which case, check out these options below!

This is the steepest way to get to the top of the rock. It’s like being on a stair climber at the gym for a few hours. Only with better views. You’ll climb 240m up on a route .86miles in length. That should give you an idea as to how steep it is.

The trail starts quite level as you’ll wind along the side of the rock, but intermittently you’ll hit points of steep, switchback steps.

Eventually, you’ll crest the rock at its highest point near O’Hara’s Battery. From here you can either go down the way you came or take O’Hara Road and pass by lots of natural and historical sites (most listed below as further activities for your day in Gibraltar.

One of the most impressive adventures on Gibraltar is St Michael’s Caves. The caves are a series of limestone chambers and tunnels that go so deep people used to say they must’ve gone all the way to Africa!

There are an upper section and a lower section which are linked with drops of up to 45m.

Originally these were used as when defending Gibraltar from attacks by the Moors and the Spanish. They were also once prepared to be used as a hospital during WW2 but were never actually used.

Nowadays they make a great area to explore and they also house a 600 person auditorium where concerts take places.

Did you know there are lots of dolphins living off the coast of Gibraltar? You can take a boat trip out to find and see these amazing animals which is sure to be an afternoon to remember!

Underneath the massive rock of Gibraltar are miles and miles of underground tunnels. The oldest were dug during the 1779–83 Great Siege of Gibraltar. No longer needed as a defence mechanism, you can now explore the tunnels, ducking and squeezing as you go, on your day trip to Gibraltar.

Gibraltar’s most famous residents are arguably the Barbary Macaques. These apes are said to be the only free-living apes in the whole of Europe! You can visit them at Apes Den on the rock and watch as they jump around and play together.

Be careful with your belongings as they tend to steal things they think might be tasty. Also, do not feed the apes for many reasons, one of which being the fine of thousands of £££s you’ll get!

We paid a visit to the Moorish Castle during our day in Gibraltar and loved exploring the gatehouse and the walls. Partly because there were some super views from up there! Unlike some castles (particularly those castles in Scotland) there still plenty to see here and it’s easy to imagine people running about whilst under siege!

Relax On The Beach

Gibraltar is home to six beaches which is incredible for such a small place. If you’ve been holidaying in Spain then chances are you’re probably staying near some great beaches already. But, if you want more beaches then check out one in Gibraltar.

For sandy beaches, head to Sandy Bay, Eastern Beach, Catalan Bay, and Western Beach. The beach at Catalan Bay is backed by a charming village, while Eastern Beach is close to the international airport, so you can watch the planes come in while you swim. The other two known as Camp Bay and Little Bay are rocky beaches but they also have lidos for swimming.

If you love flowers and plants then visit the Alameda Botanic Gardens. The gardens are filled with palms, pines, olives and plants from all over the world. You’ll find flora from California, Asia and even Australia!

The Ibrahim-Al-Ibrahim mosque is the southernmost mosque in mainland Europe. It’s also extremely lavish and ornate.

very interesting - I am looking for a break in southern Spain only an hour away from Gib - as I would like to spend a couple of days exploring Gibraltar - I would if possible like to stay overnight in Gib but seem unable to find any advice or holiday info how to go about arranging this - if you have any tips I would be grateful. thank you

If you're still looking for somewhere to stay in Gibraltar I'd recommend taking a look at Booking.com as they have lots of different options for hotels / B&Bs in Gibraltar there.

Do you recommend a tour service or taxi? Is this all done on foot? If heading down on a Sunday do you recommend getting there pretty early to avoid traffic? TIA

Thank you for a great article with many useful information! Can't wait to visit Gibraltar! :)

Have a fantastic time!

Very good write up of all Gibraltar offer for a day (or a weekend) visit. The views are tremendous