On our recent trip to Tulum and Isla Holbox, we had a long layover in Mexico City on our way back to Vancouver. It was originally supposed to be a couple of hours, which we’d planned to spend at the airport, but this was extended and we had about 20 hours in Mexico City. Our flight landed late in the evening on a Sunday night and left the following Monday evening. This meant we had the best part of one day in Mexico City.

I’d never been to Mexico City before (although Thom had, and one of his best friends lives there), so was keen to see the highlights. If you find yourself in a similar situation and are wondering how to spend a layover in Mexico City, whether a short one or a 36-hour layover, here are some of my top things to do in Mexico City in one day. 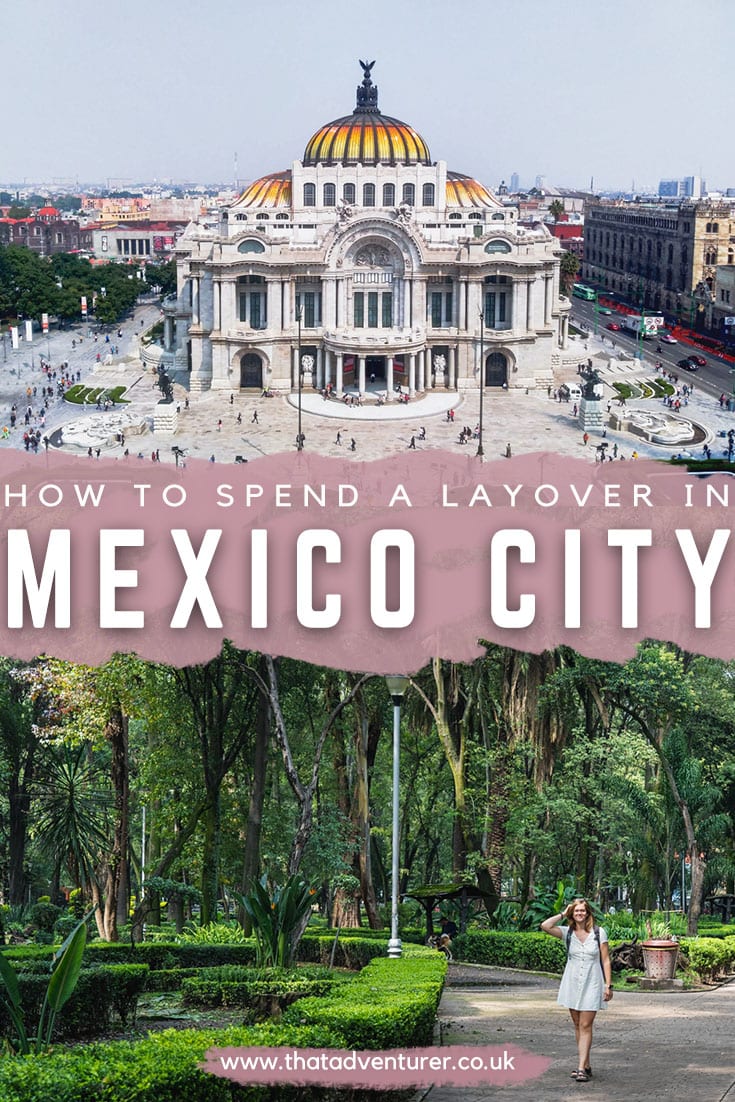 Once you’ve touched down in Mexico City’s Juarez International Airport it’s time to head into the city! While you can leave the airport during a layover, there are a few things to consider before leaving the airport. These include what to do with your bag, and getting through immigration and Mexico City customs.

It’s also important to make sure you’ve got enough time to leave the airport. Sure that sounds obvious but factor in the fact that you’ll have to get through customs, travel to and from downtown and have time to do one of the fun things to do in Mexico City, PLUS leave around 2 hours to check-in for your departure flight.

Either on your flight or at immigration after landing, you’ll be given a form. You should fill this out and keep the part they give back to you until you leave Mexico. Don’t lose it or throw it away! If you do lose it you’ll have to get another one at a cost of around $20USD, cash only.

If your layover is part of the same aeroplane company, your larger bags may have been sent directly to your destination. If not, then you can find luggage story at the Mexico City Airport. The luggage storage in Mexico City Airport’s Terminal 1. It’s on the ground floor between doors 7 and 8 (near Hertz car rental and another near Firefly Travel Agency). There are also some Mexico City airport lockers in Terminal 2 on the lower level. Expect to pay around 150MXN per locker.

Luggage storage is particularly useful if your layover is very short and you won’t be staying in a hotel or Airbnb. However, it’s also great if you are in the city overnight as it saves you from having to ask a hotel to store your luggage, or carrying it around with you after the checkout time of your Airbnb.

Top tip: Make sure to pack clothes/underwear in your hand luggage if your bag is sent straight to your destination, or you want to store it at the airport.

It takes roughly 20-30 minutes to get from the airport to Roma, one of the most popular places to stay in Mexico City. There can often be traffic, so leave plenty of time to get back before your departure flight.

To get an Uber from the airport into Mexico City proper costs around 160MXN.

Alternatively, you can get the Metro which will cost around 5MXN depending on which part of the city you’re going to.

Where to stay on a layover in Mexico City

If you have an overnight layover then you’ll need to book somewhere to stay (unless you want to sleep in the airport!). You could choose one of the hotels near Mexico City airport or head into the city centre which is what we ended up doing.

If your flight is the following morning, you’ll probably just want to stay pretty close to the airport, or pick one of the hotels inside Mexico City Airport or nearby. The following Mexico City airport hotels are a good option: 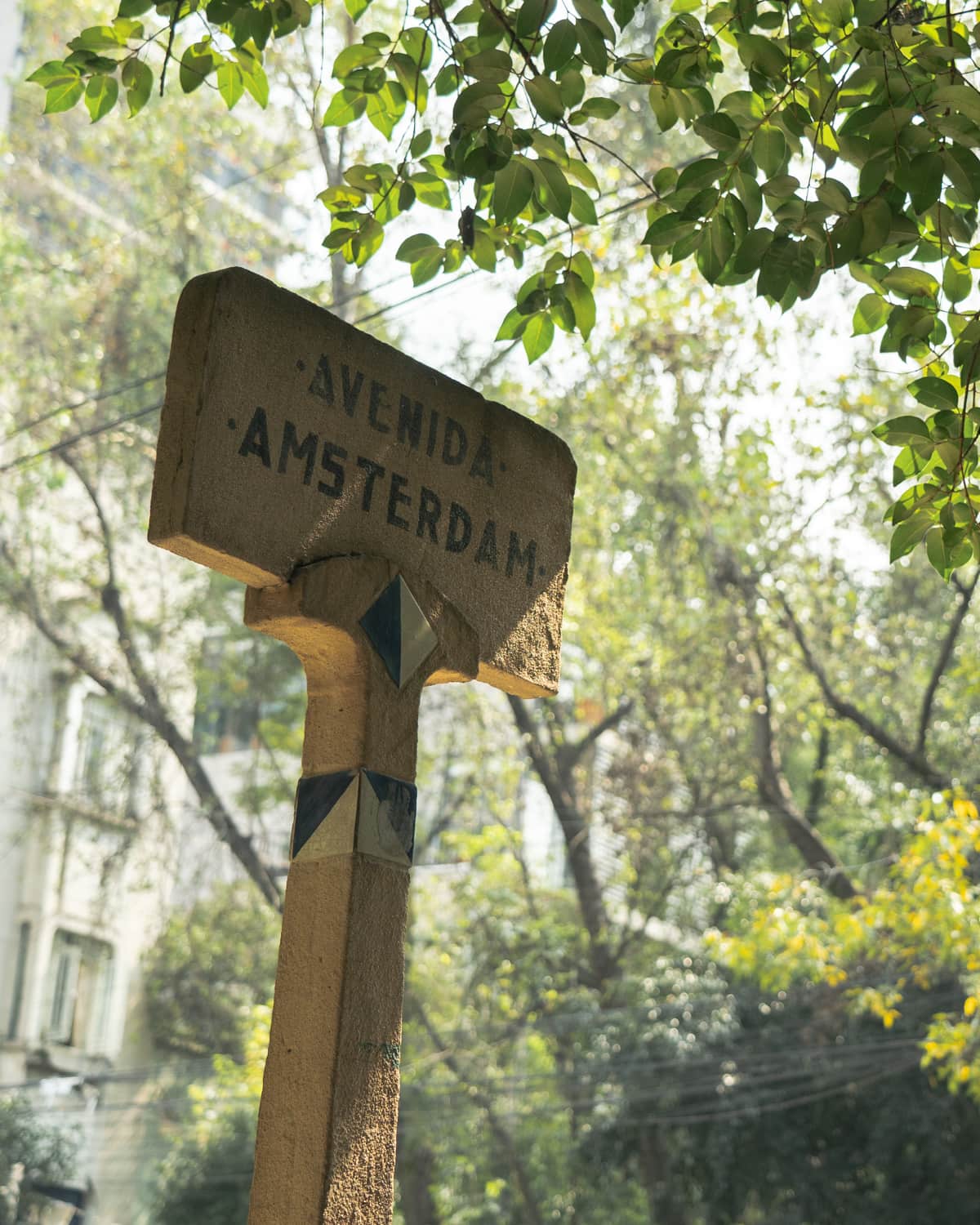 If you’re planning to spend more time in Mexico City then I highly recommend checking out Airbnb. There are so many Airbnbs in Mexico City and they’re all super well priced and often really stylish too.

If you’ve never been to Mexico City before it can be really difficult to know where to stay. You need to exercise some caution too since certain areas of the city aren’t super safe. Most visitors to Mexico City choose to stay in the areas of Roma and Conde

These are the more ‘gentrified’ areas of Mexico City. They’re relatively quiet, full of great restaurants and leafy streets. They’re also close enough to the historic centre of Mexico City that it makes it a great place to stay on a layover in Mexico City.

What to do in Mexico City on a layover

Top tip: If your layover in Mexico City happens to be on a Monday, you’re going to find that a lot of restaurants and shops are closed. Make sure you research in advance so you don’t head out to one in particular and find it closed! 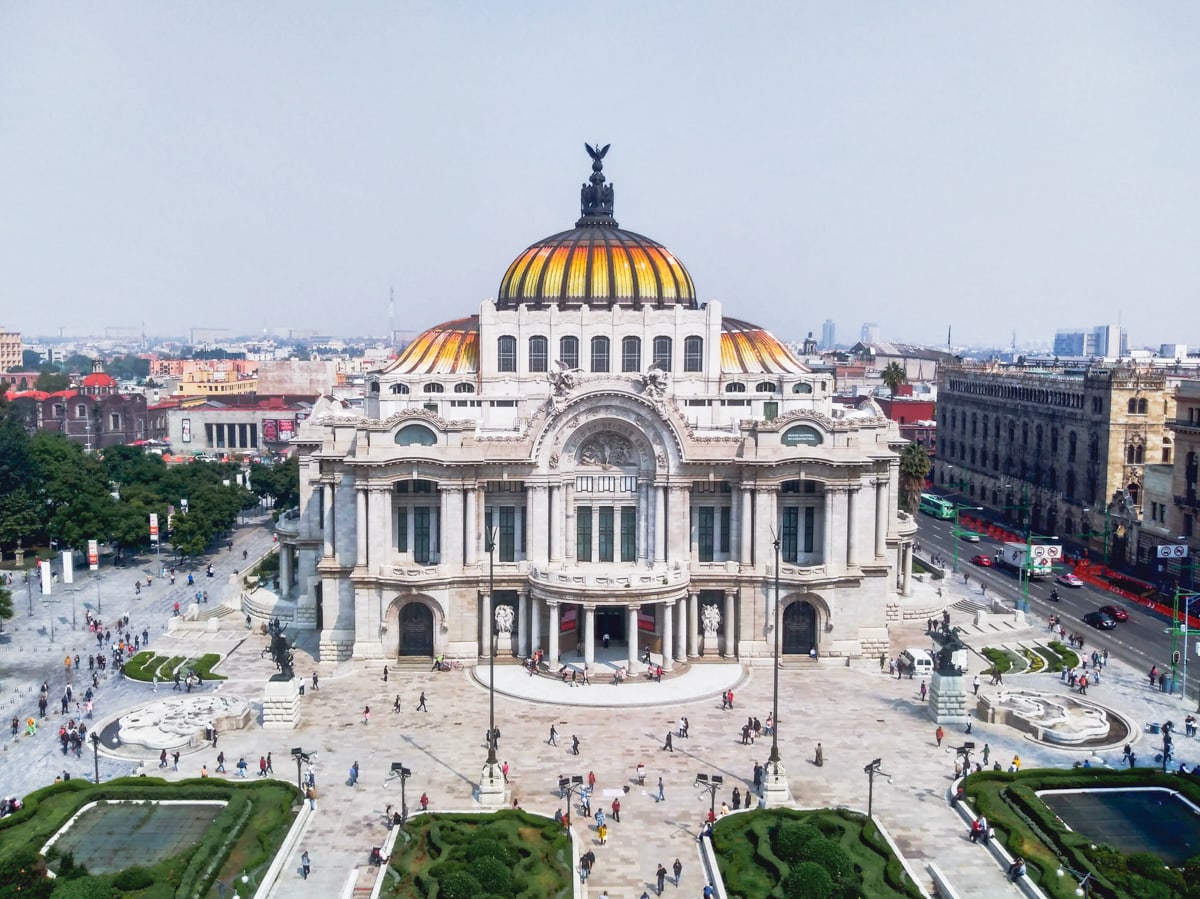 This beautiful building houses an art museum in Mexico City. It’s in the historic centre and right next to the Alameda Central Park which offers a spot of peace and shade on a hot day in Mexico City. The palace houses exhibitions puts on dance, theatre and opera events and it’s the place to go to get a dose of culture.

The architecture of the building is beautiful and the roof, in particular, is a showstopper. You can get an incredible view of the building by getting a drink in the Finca Don Porfirio Juarez cafe in Sears on the 8th floor. The service here when we visited was super slow but the view was great and definitely one of the top things to see in Mexico City. 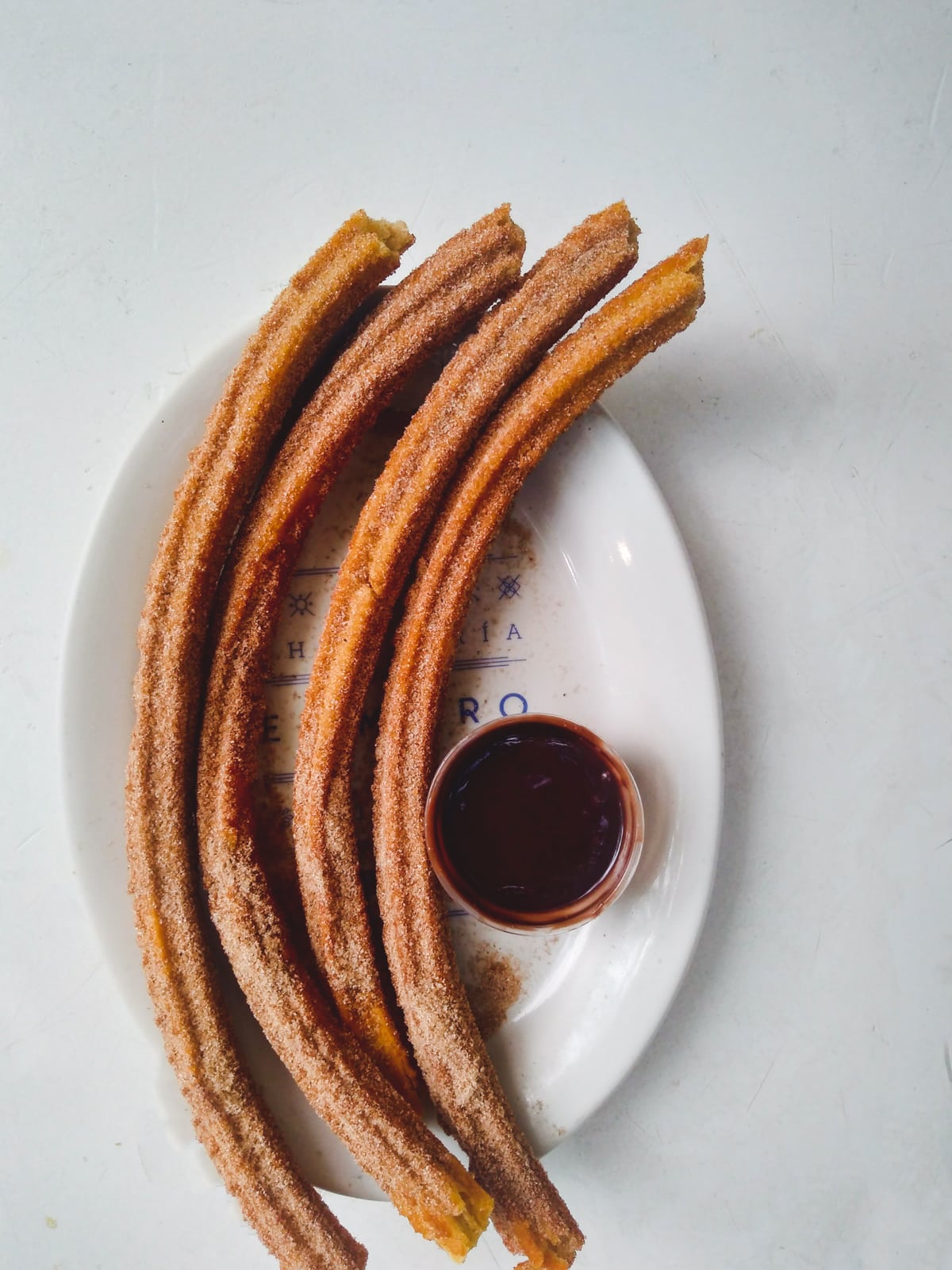 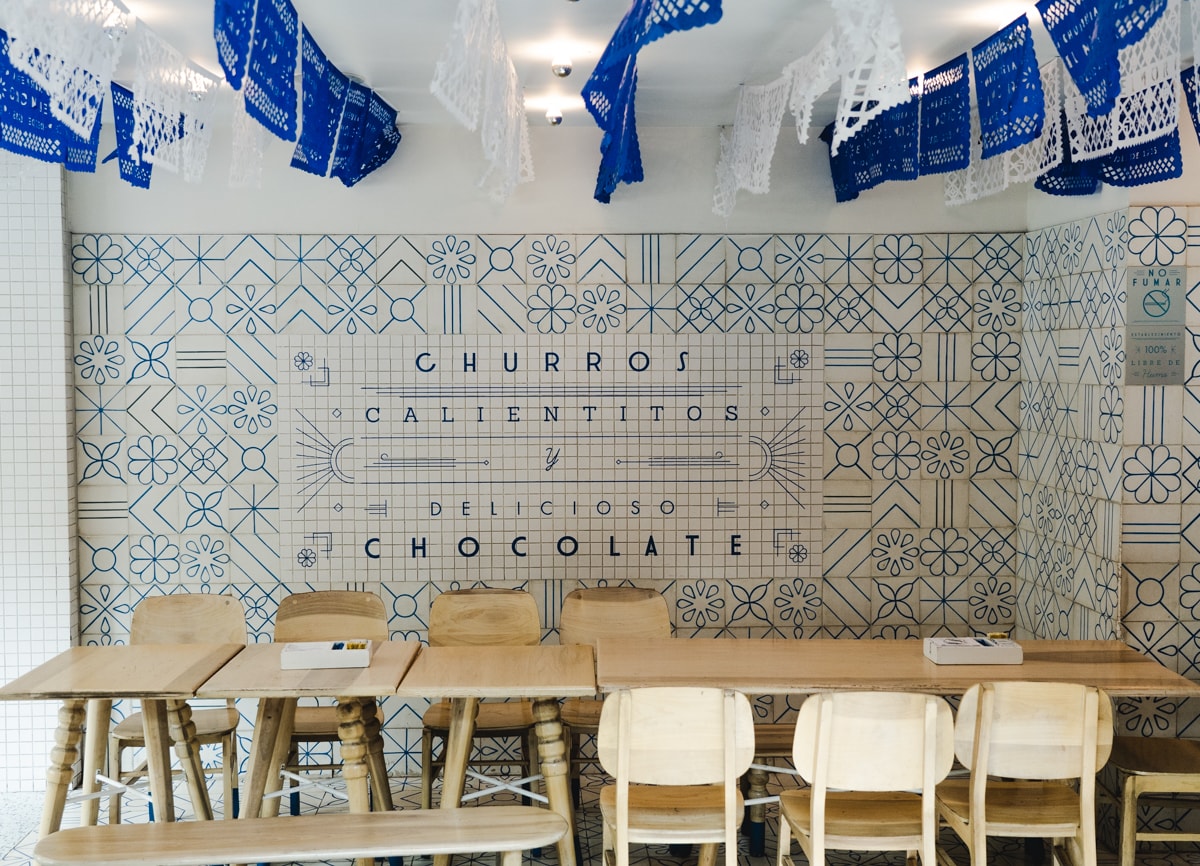 You can’t visit Mexico and not get churros at least once. One of the most well-known places to get churros in Mexico City is Churreria El Moro and it lives up to the hype.

We got some churros with chocolate sauce to dip them in share while overlooking Parque Mexico. I’ve heard the hot chocolates are great too!

There are two Mercado San Juans. There’s the more touristy one which tends to show up more on Google (number 2) and the other one which is on the corner of Arcos de Belen and Lazaro Cardenas (number 1).

The Mercado San Juan 1 is your typical everyday market and, if you’re a foodie, you’re sure to love wandering around it. It’s a great place to get some spices that you can’t typically get back home such as Chile de Arbol.

The second Mercado San Juan is full of unusual food and snacks such as crickets or scorpions in mezcal. Sure, it’s more of a touristy market but that doesn’t make it any less fun. 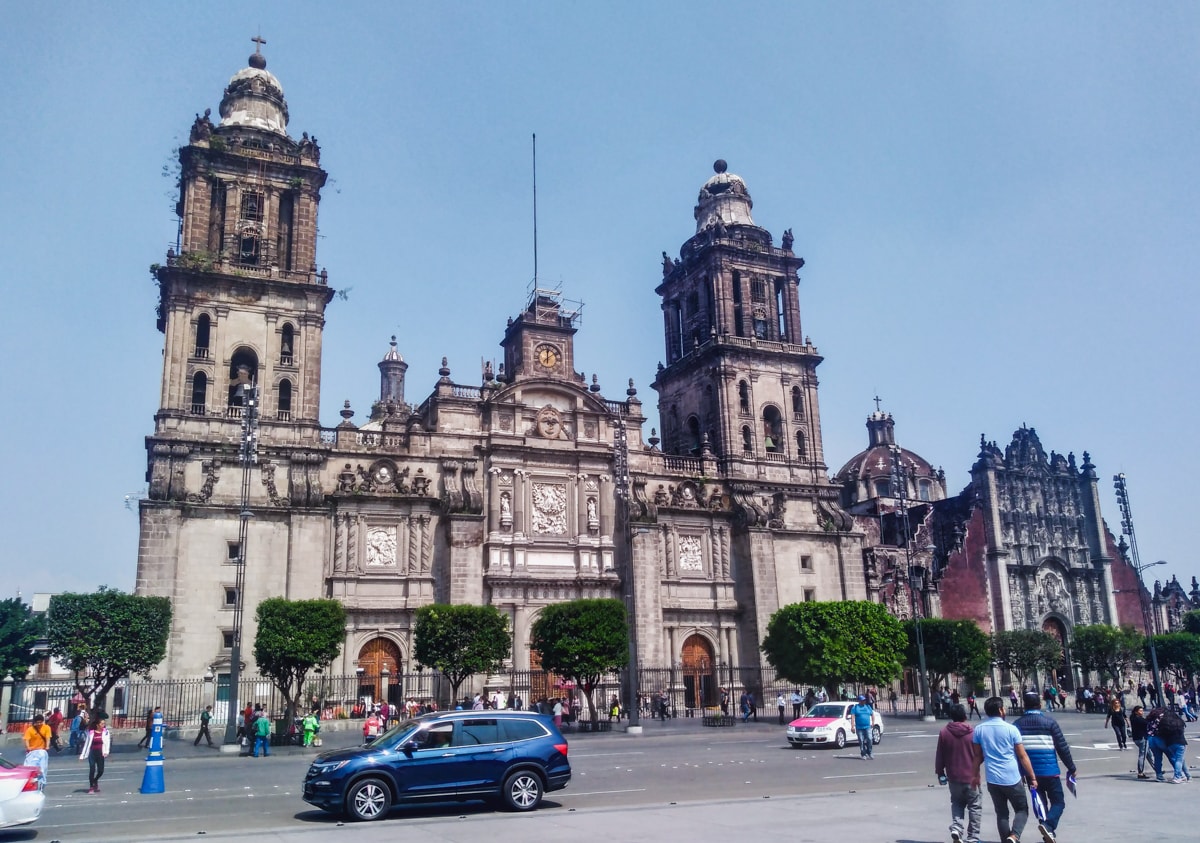 If you only have 24 hours in Mexico City make sure you stop by this famous part of the city. It’s one of Mexico City’s top attractions to see on a layover: the Plaza de la Constitucion.

This huge plaza in Mexico City is one of the largest squares in the world. On one edge of the square is the Mexico City Metropolitan Cathedral (free entrance( which was undergoing some reconstruction when we visited. There’s also the Templo Mayor Museum which houses archaeological finds from the Aztec era and you can see some of them from the outside.

See Mexico City from above

If the weather is nice on your Mexico City layover and not too smoggy, it’s well worth heading up to the top of the Torre Latinoamericana. Up here you’ll get a 360-degree view of Mexico City. It’s the first skyscraper successfully constructed on earthquake-prone land and has been able to withstand several major earthquakes which is pretty impressive! 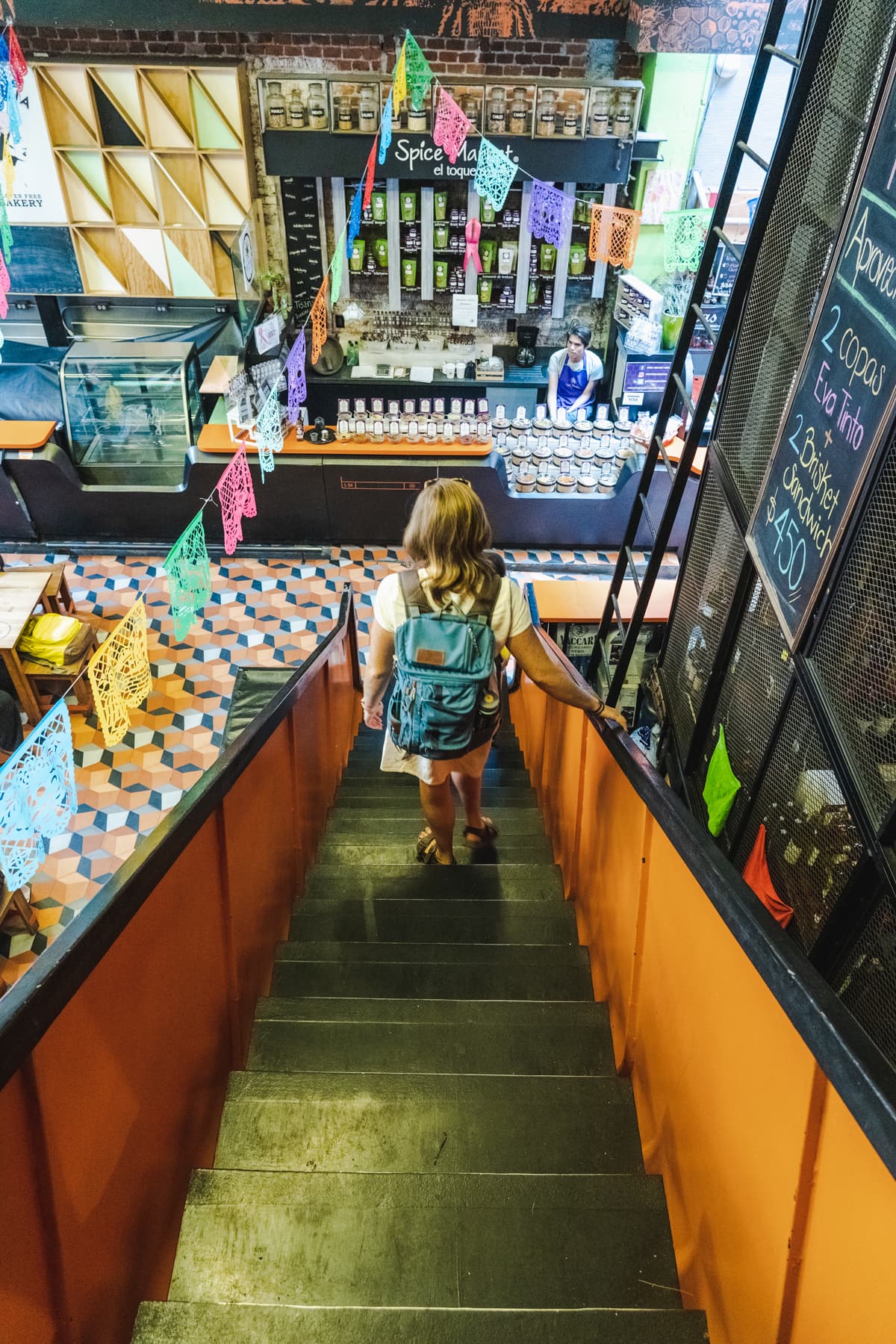 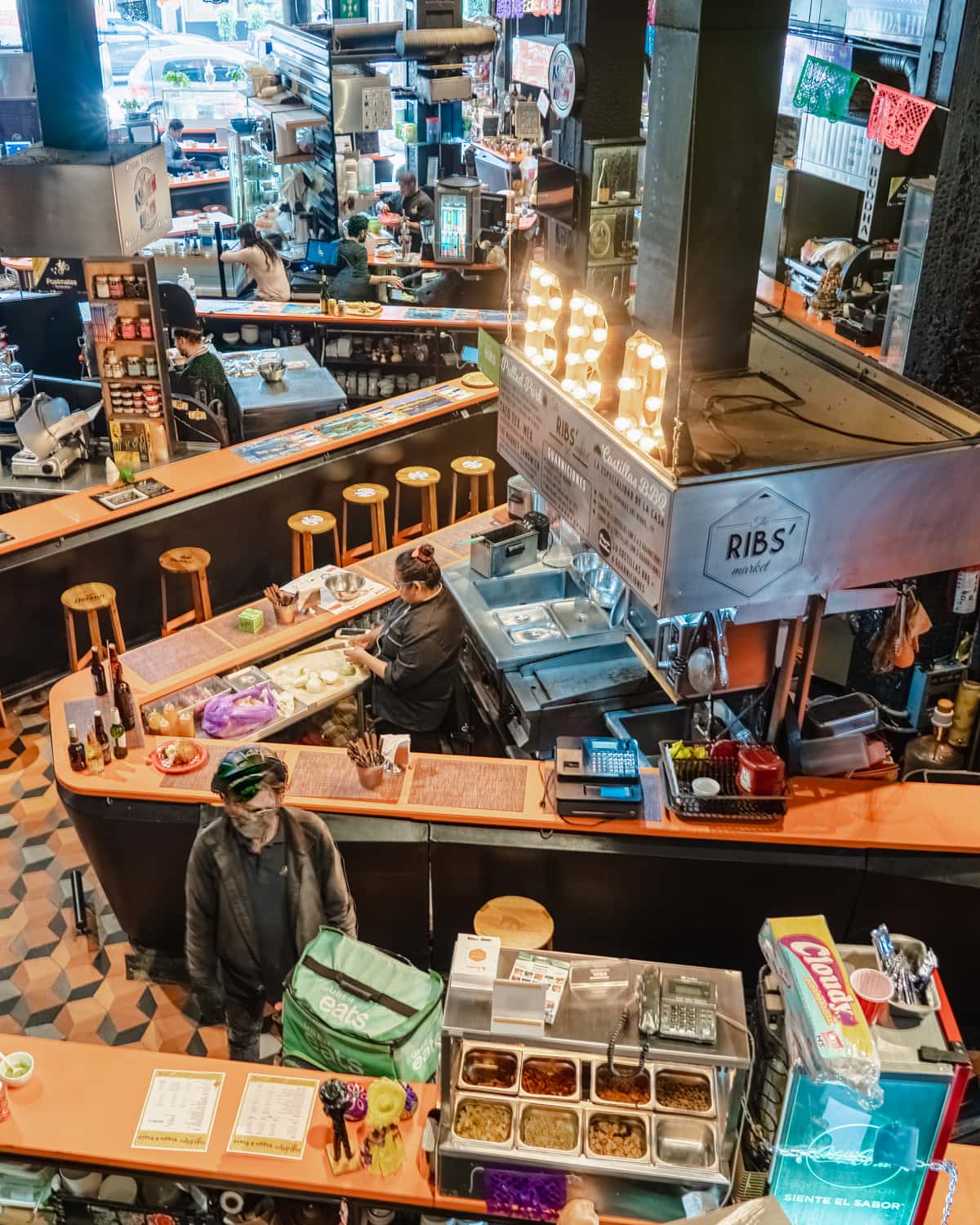 Mercado Roma is a public market, but a very different type of market to Mercado San Juan. This market is pretty hipster-looking and is set across two floors with plenty of seating at which to eat whatever delicious treats you’ve chosen for lunch.

There are many stalls here serving foods from all over the world and it’s a great place to stop in for lunch. 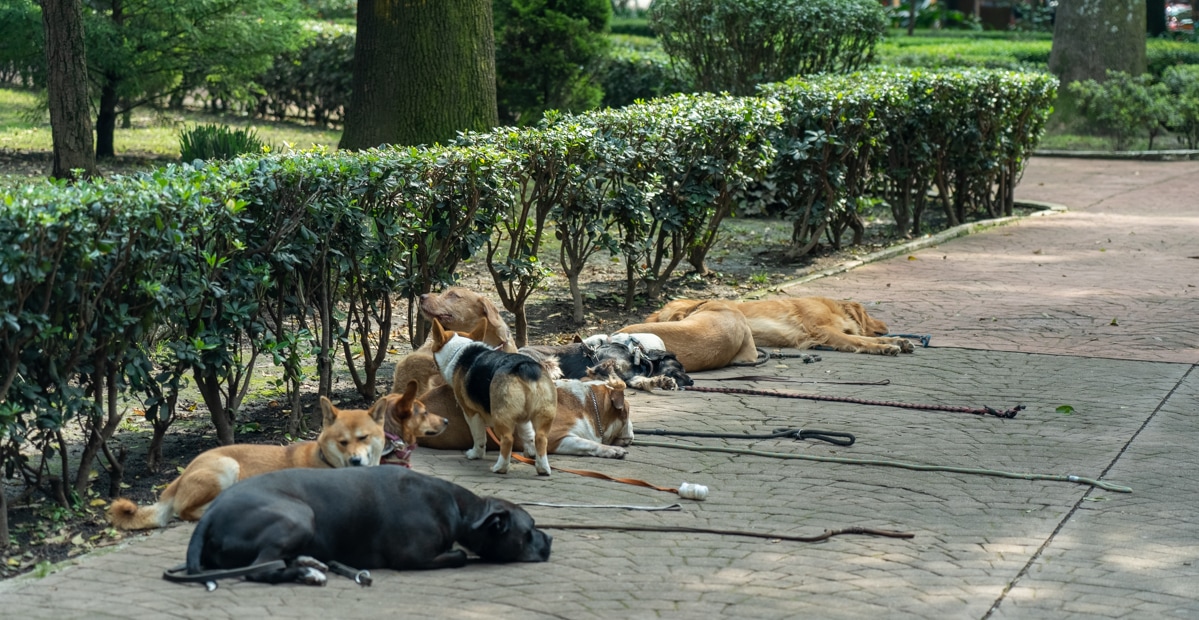 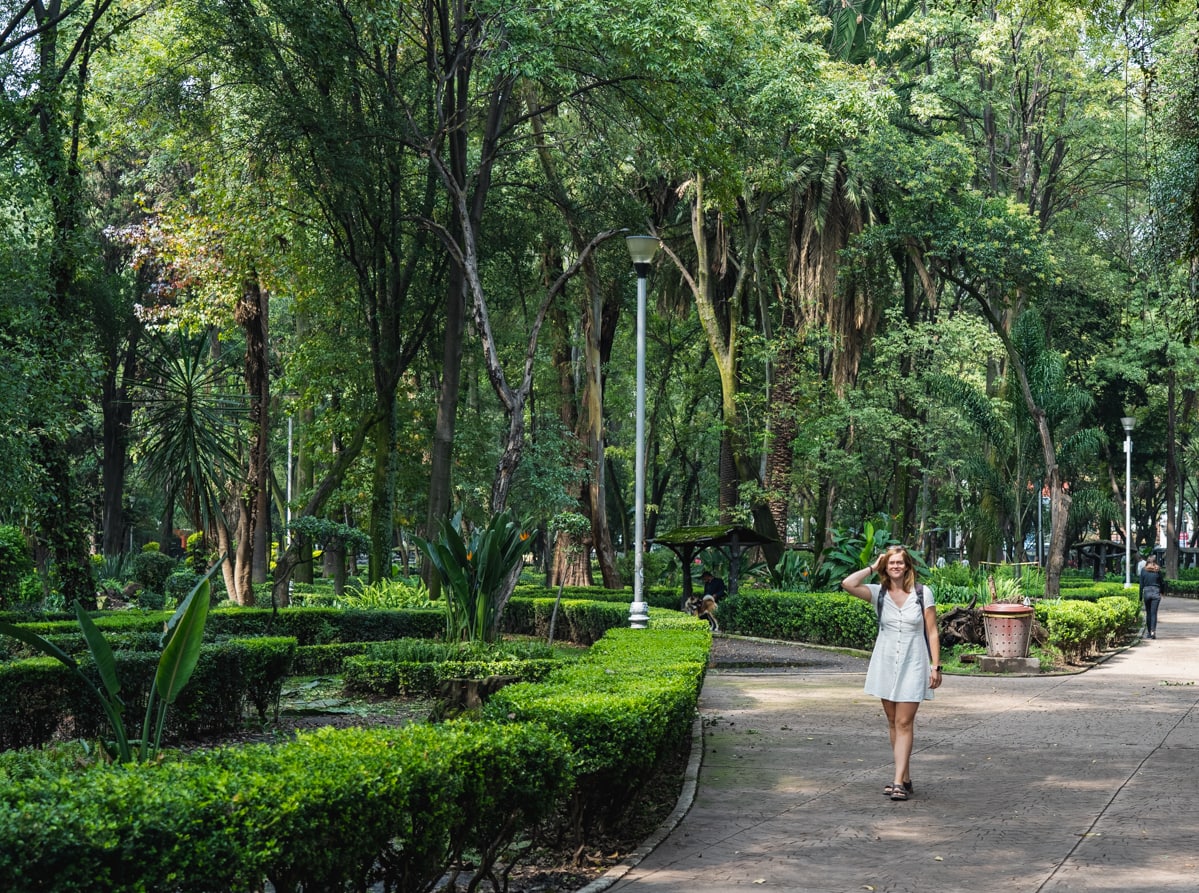 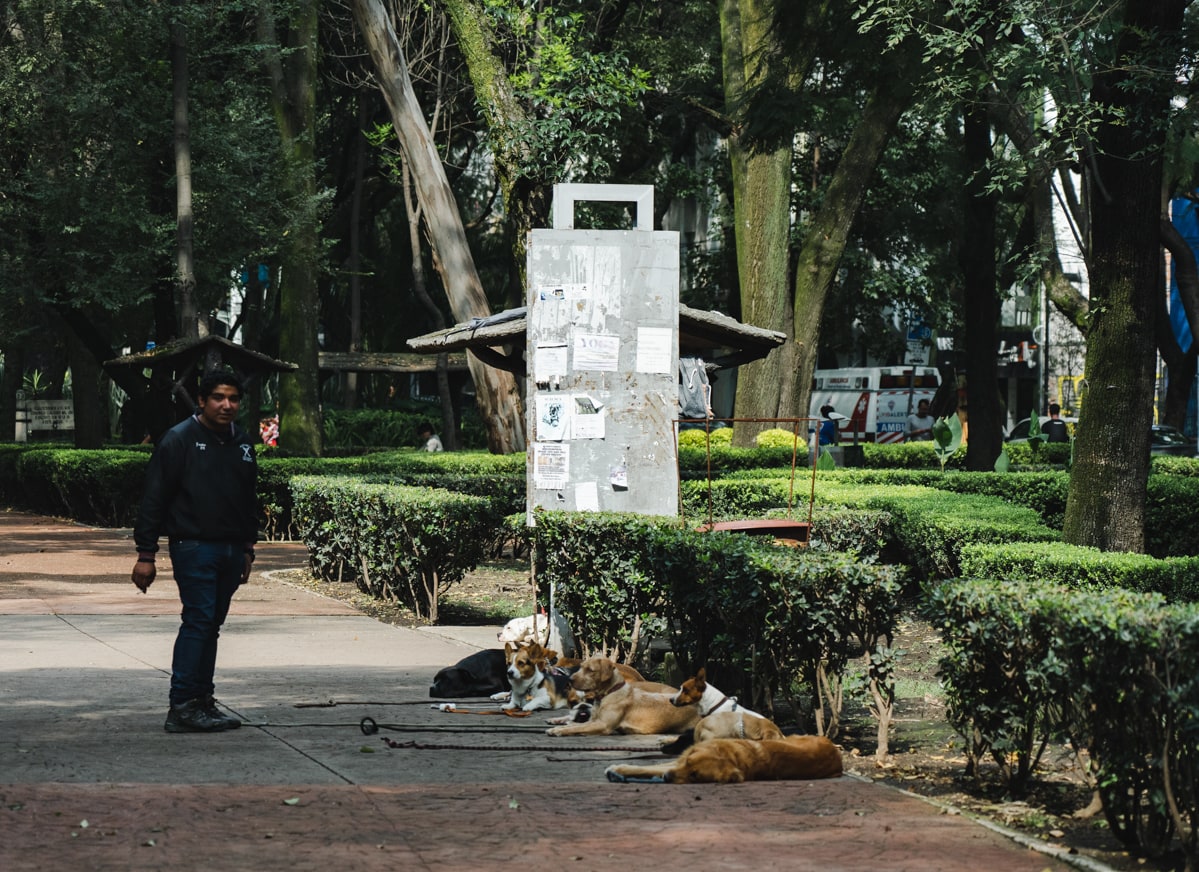 Parque Mexico is a beautiful park which seems super peaceful. Oh, and it’s FULL of dogs so what more could you want?

You’ll see plenty of dog walkers in Mexico City walking 6+ dogs at a time (massively outdoing my dog walking!). There’s also a dog school for obedience here so if you see 8+ dogs lying down on the ground and not moving they’re being very good boys and girls at school.

I loved wandering around this park before getting some churros! 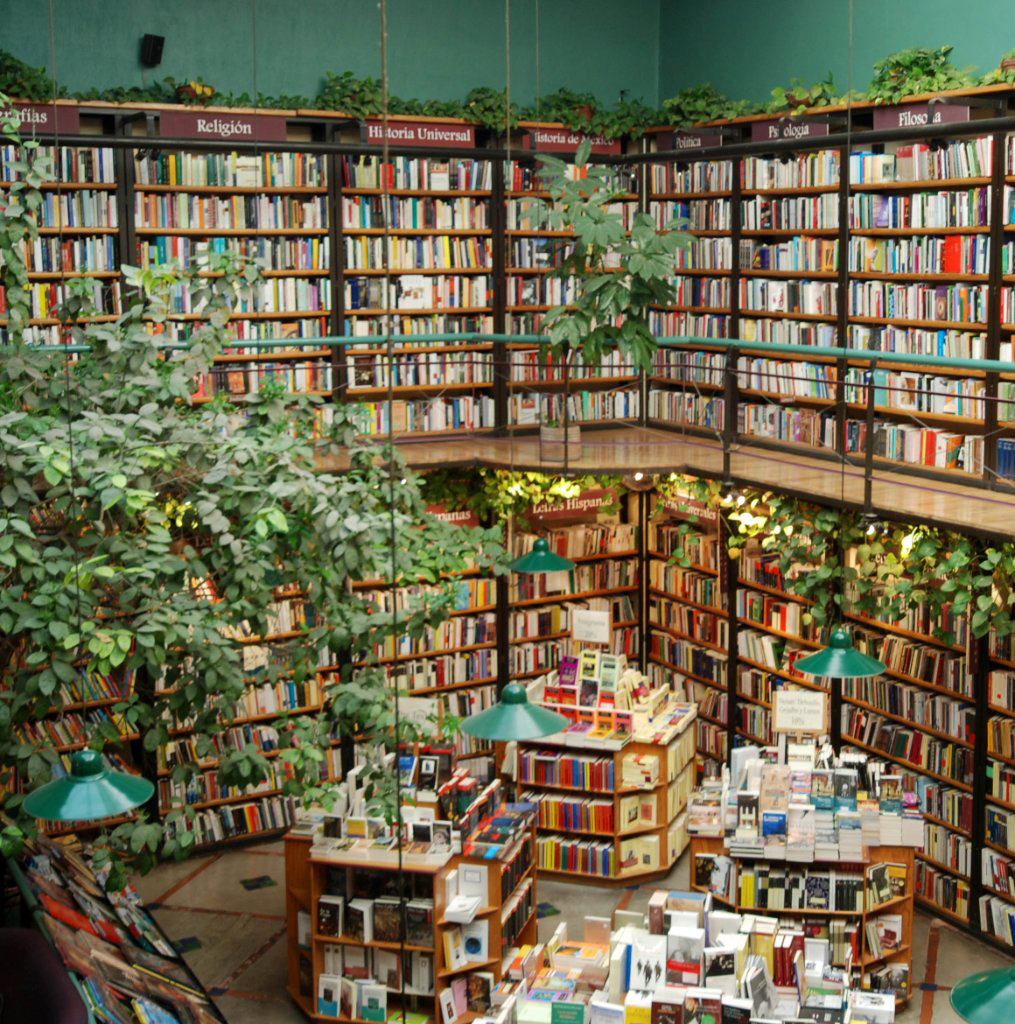 The gorgeous El Pendulo store in Polanco often features on lists of the best bookshops in the world. There’s also a smaller, but nevertheless still beautiful branches in Condesa and Roma. All of them are beautiful and have a lovely cosy charm to them. They’re perfect for browsing and finding some books as souvenirs.

Breakfast pastries (or mid-morning ones)

Whether you’re going out for breakfast (make sure someone orders chilaquiles!), or just grabbing something to eat quickly on the go, you’ve got to grab some pastries at some point during your day in Mexico City.

Two places that grabbed my eye during our 1 day in Mexico City were La Bohême (right next to our Airbnb) and Panadería Rosetta. The difficult part will be trying not to order everything!

Eat at some of the restaurants near Parque Mexico 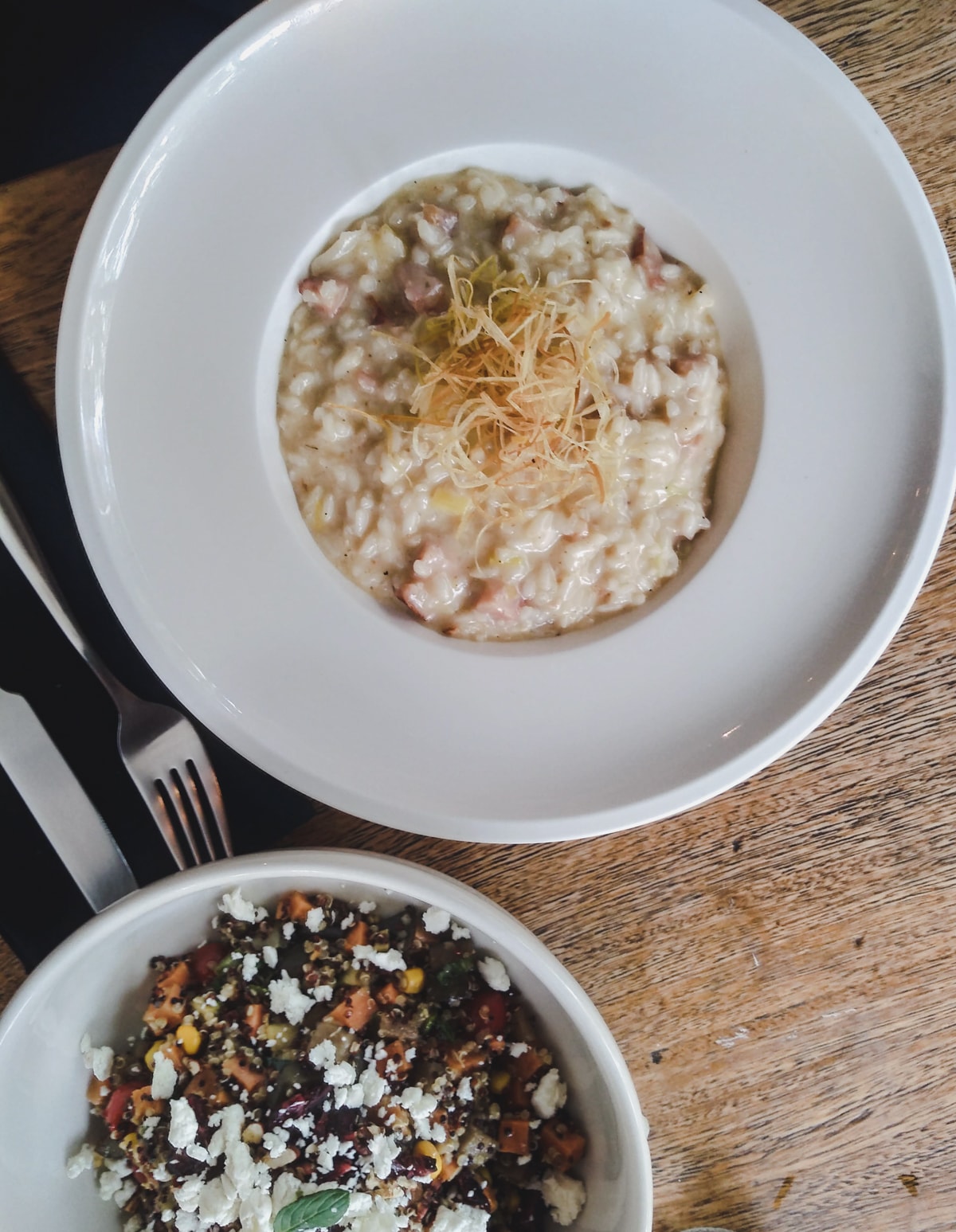 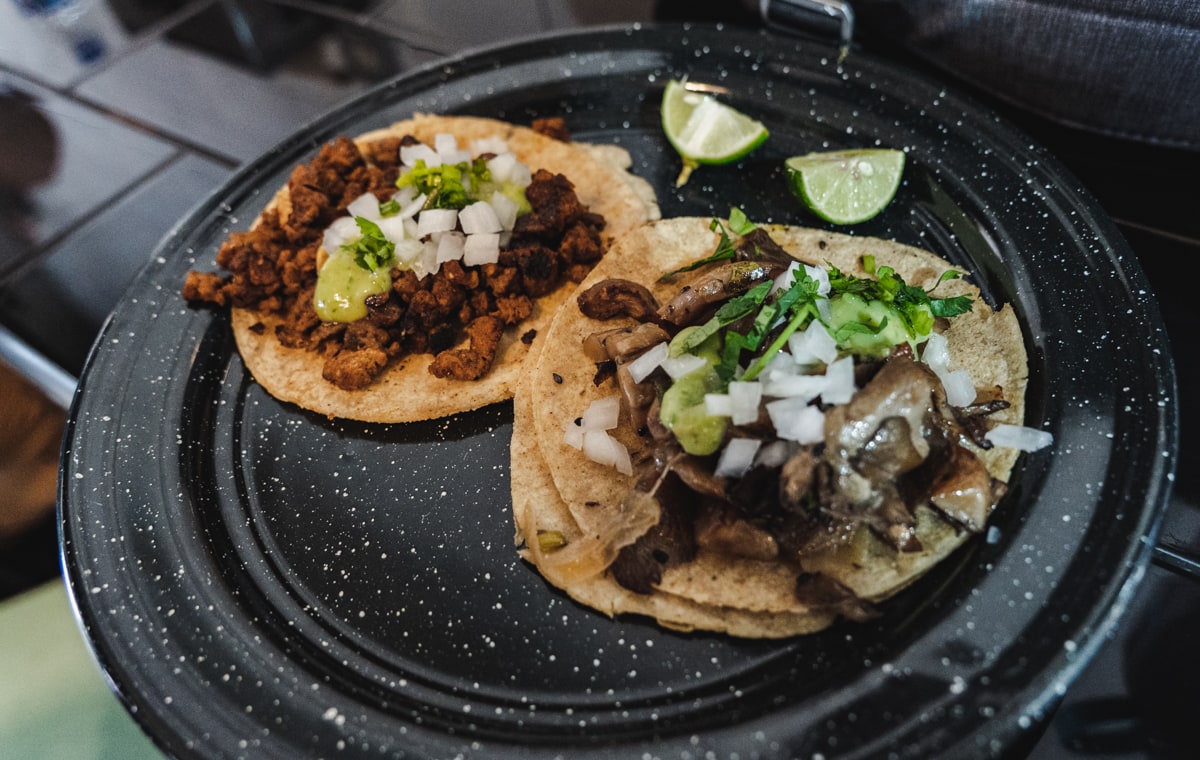 One of my favourite things about our stopover in Mexico City was how much we managed to eat! We had a tasty breakfast, ate churros, had a flavoursome light lunch at Milos and then grabbed some vegan tacos!

Honestly, it’s so hard not to eat a lot in Mexico City. You’re surrounded by tasty looking menus and restaurants every direction you go in. And that’s before even getting onto the subject of street food in Mexico City! For real though, one of the best things to do around Mexico City is eating.

Some of the best places we ate (and ones we were most tempted by) were those surrounding Parque Mexico. This area was also peaceful, tree-lined and the architecture was gorgeous too. Even if you’re not eating, it’s well worth wandering these streets.