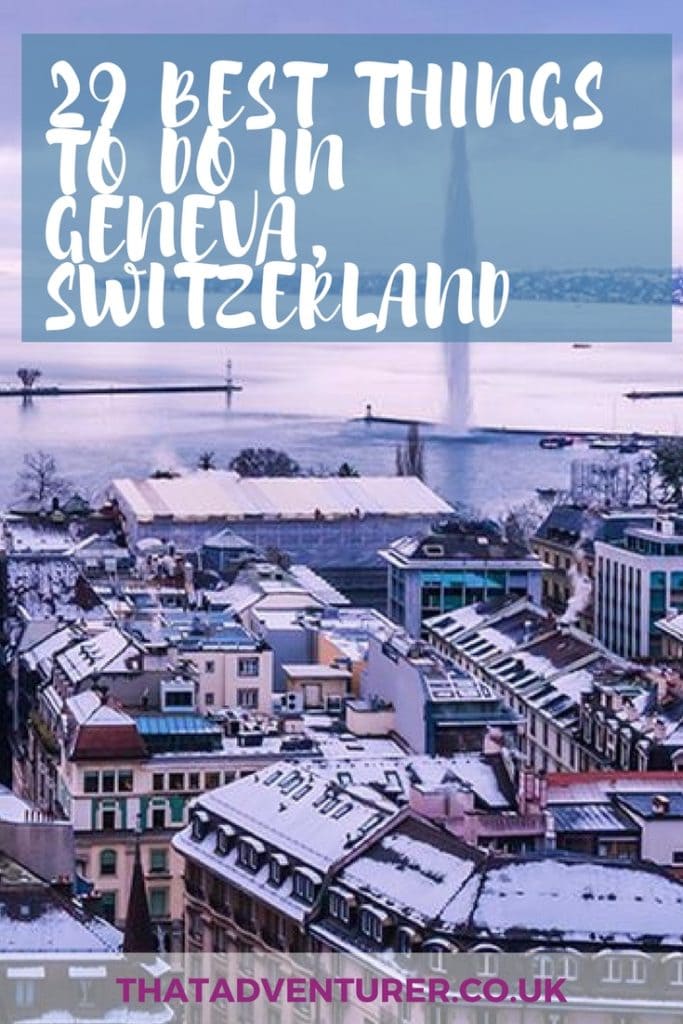 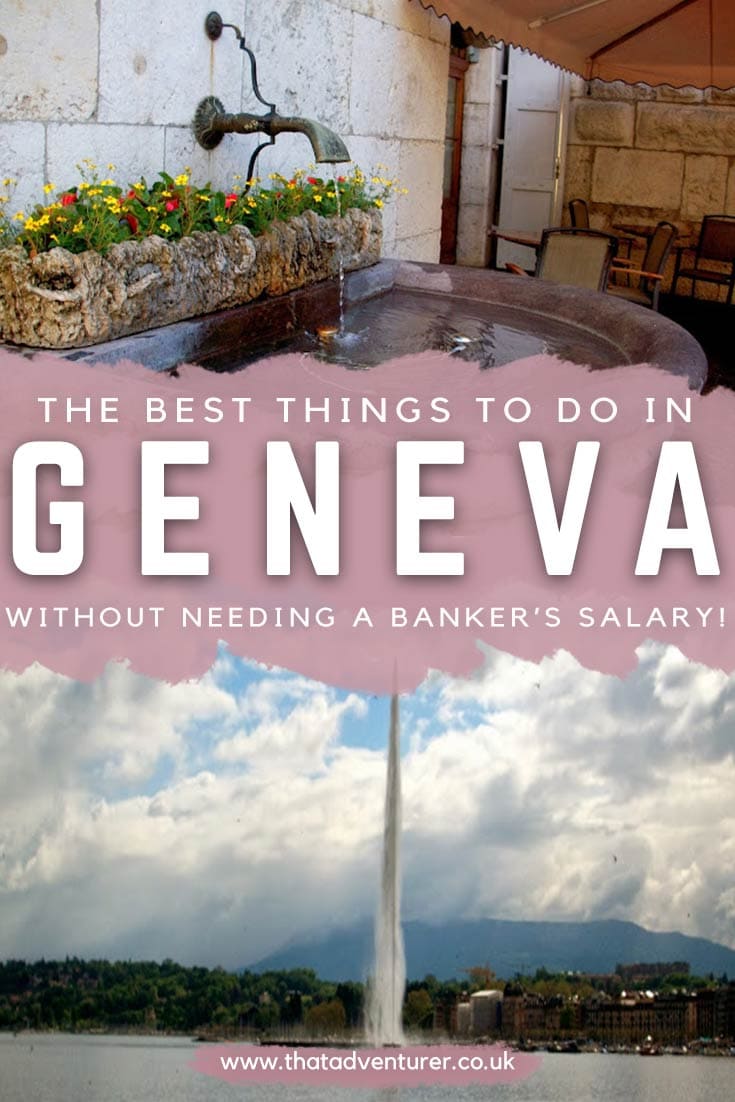 Geneva is famous for many things. One of these is that the city of Geneva is where you’ll find the largest Alpine Lake in Europe: Lac Léman (Lake Geneva). The city is surrounded by the Alps and the Jura mountains and has awesome views of the beautiful Mont Blanc.

Geneva is also the home of Europe’s United Nations as well as the huge NGO the Red Cross. It’s easy to see why it’s recognised as a global hub for diplomacy and it’s also a global hub for banking.

The city is in the French-speaking part of Switzerland and so you’ll hear French being spoken and the cuisine is largely influenced by France too. 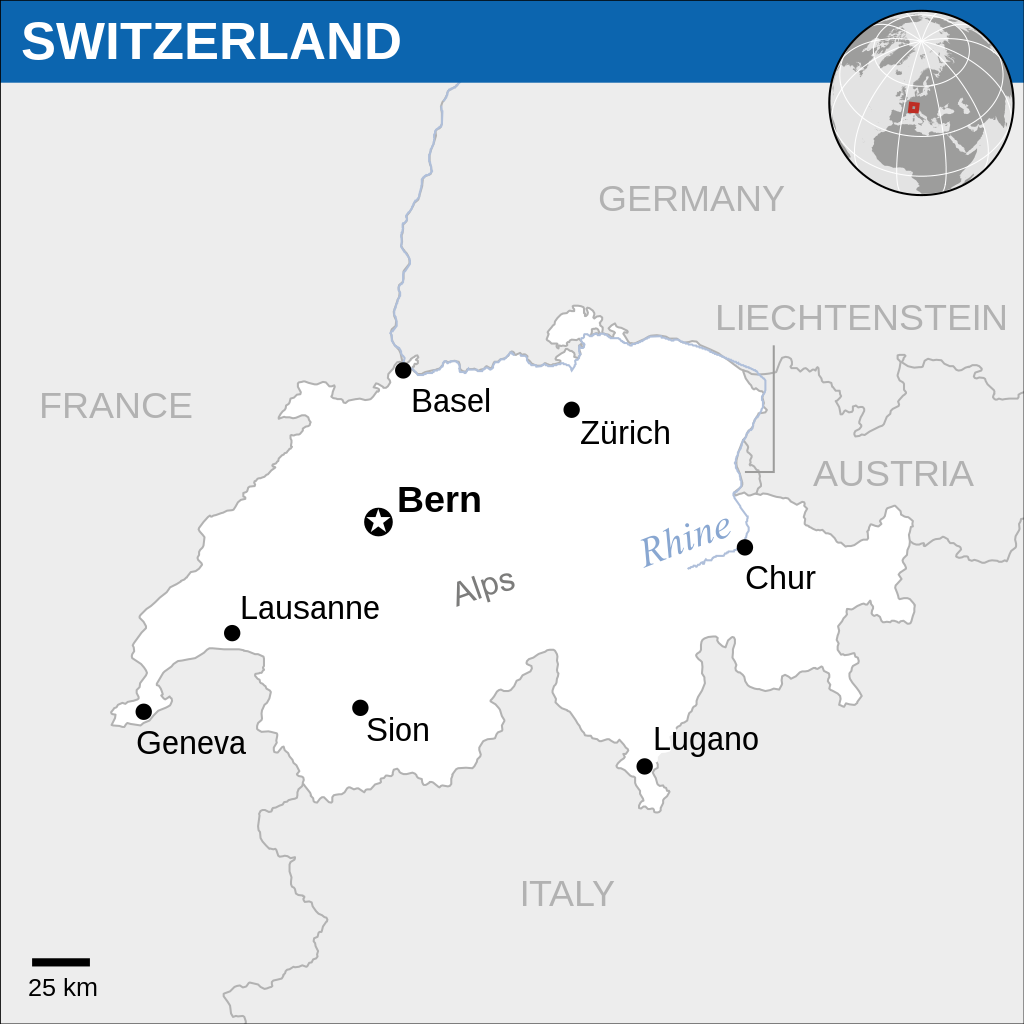 Geneva is in western Switzerland very close to the border with France. The largest major city near Geneva is the French city of Lyon.

How to get to Geneva

Geneva is well served by flights, buses and trains from all over the world. The below information focuses on getting to Geneva from London, but the links are useful wherever you’re travelling to Geneva from.

Flights to Geneva from the UK

The Geneva Airport is a fairly large international airport. You will be able to find fairly cheap flights using Skyscanner from London to Geneva.

If you’re not sure of your dates for travelling to Geneva then be sure to sign up to Dollar Flight Club. They find incredibly cheap deals on flights (their customers save an average of $500!).

You can also get the bus from London’s Victoria coach station to Geneva with one change in Paris. Getting the bus takes a long time but it’s usually cheaper than flying or getting the train.

Trains from the UK to Geneva

Another way to travel from the UK to Geneva is to get the train. However, this is a bit more complicated with several changes and bookings required.

You can book each leg of the above journey here.

Where to stay in Geneva

I always use Booking.com or Airbnb to book my accommodation when travelling. Here are some of my top, budget-friendly picks below. Take a look at all the Geneva hotels on Booking.com to find the best place to stay in Geneva.

Best things to do in Geneva on a budget

If you’re on a budget you can still enjoy the Geneva top attractions. Yes, things in Geneva are expensive but if you’re not buying designer wears and eating at fancy restaurants you can still explore Geneva without having a banker’s salary!

BEFORE YOU GO: Get the Geneva Pass which saves you money on 40 Geneva tourist attractions, gets you FREE public transport and more.
Buy it here

Lake Geneva is the biggest Alpine lakes in Europe. Come summer, the beaches are full of people relaxing. There are yachters, rowers and water skiers braving the cool waters and it’s generally the place to be. However, even in winter, it’s worth taking a stroll around Lake Geneva’s shore.

Even if you’ve only got a weekend in Geneva you can still spend time strolling around the lake – you can’t miss it!

Geneva’s local mountain is Mount Salève and it’s home to some of the best views of the city. It’s quite an easy hike (about 1 to 2 hours long) and is a great way to work off all that fondue!

If you prefer the quicker, even easier route then opt for the cable car from Veyrier.

3. Get to know more about the Palais des Nations

4. Get science-y at CERN

Just on the outskirts of Geneva is CERN and it’s another of the top places to see in Geneva. If you time your visit right (when the collider isn’t on) you may get to step inside.

However, when you can’t go inside there’s also the Microcosm and the CERN Laboratory. Here you can learn about how the scientists working there are trying to crack the secrets of our universe.

Find out more about visiting CERN 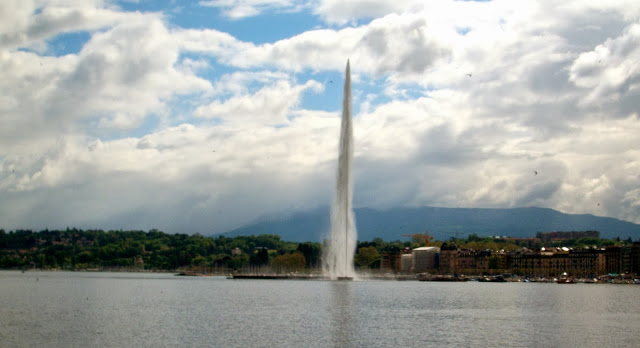 The Jet d’Eau is a common item on a list of “what to see in Geneva”. To be honest, it’s pretty difficult NOT to see the Jet d’Eau on your Geneva trip.

This impressive fountain shoots water from Lake Geneva up to 140m into the air, you can apparently see it from way up on Mt Salève too!

Bains des Pâquis is one of the most popular beaches in Switzerland during the summer but, from September to April restaurant La Buvette de Bains draws crowds thanks to its fondue. They also do a fondue au cremant (sparkling wine fondue) which is worth a try.

It’s hard to beat the atmosphere here while you gorge on cheesy goodness. 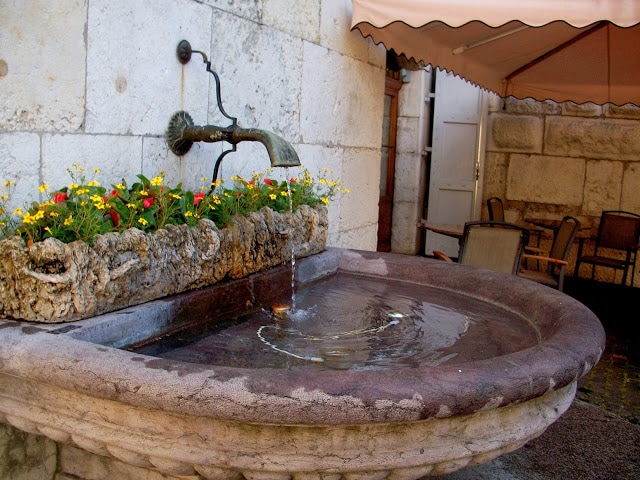 When you visit Geneva be sure to take a stroll around Geneva’s old town. It’s a beautiful maze of narrow and hilly streets and is one of the top things to see in Geneva.

Start your exploration off at Place du Bourg-de-Four. This is the oldest place in Geneva and is now full of cafés and shops. Take any street and wander around the old town for a morning or afternoon.

Getting lost is half the fun but if you want to learn more about the history as you go, then take one of the Geneva sightseeing tours below.

7. Explore the fleamarket of Plainpalais

Every Wednesday and Saturday at Plainpalais square you can browse Geneva’s massive flea market.

There’s everything from furniture to war memorabilia and all sorts in between.

9. Explore the Italian side of Geneva in Carouge

The area of Carouge was constructed in the 18th century by Italian architects and began life as a separate town to Geneva. It feels very different from the centre of Geneva with a more Mediterranean look and feel.

There are some of the best restaurants in Geneva, Switzerland here, with great cafes, bars and shops to explore.

Parc Alfred Bertrand is a quieter park option than Jardin à l’Anglaise. It’s been open since 1940 and is a pretty place to relax after exploring nearby. If you visit on a Thursday there’s a little market right next to the park.

11. The Russian Church of Geneva

The Russian Church of Geneva is a bit of a hidden gem. It’s got huge golden domes and offers an insight into the Russian community of the city. It was built in 1859 and is steeped in history.

Sure, the main water feature is the Jet d’eau, but Pointe de la Jonction deserves a mention too. This green spot is where the locals head to during the summer.

There are deck chairs, a bar and fewer people too. It’s also interesting because of its location: it’s right at the confluence of the Rhone and Arve rivers.

These two rivers are a different colour which makes a super interesting two-toned river at this point.

Head to Qu’Importe in Carouge and work your way through their extensive range of French, Italian and local wines during your stay in Geneva. There are also some great cocktails and beers with delicious tapas to complement your drinks.

Definitely one of the best places in Geneva for a quick drink!

Les Enfants Terribles is a wine bar, interior design store, a hair salon and is sometimes used for concerts and shows! Definitely check it out and make sure to try one of their delicious juices or homemade quiches.

Bit of a chocoholic? Even if you’re not you know you can’t come to Switzerland without trying their world-famous chocolate! Browse Geneva’s high-quality chocolate shops such as Chocolat Auer who have been churning out delicious truffles since 1820.

On your way through the Old Town, stop off at St. Pierre, Geneva’s cathedral and add it to your Geneva sightseeing itinerary. The building dates from the 11th century and entry is free. However, if you want to enjoy the views from the tower you’ll need to pay 5 Swiss Francs and 8 more to explore the archaeological excavations below the cathedral.

There are many nice parks in Geneva but if you’d like to play a spot of chess in the open air then head to Parc des Bastions. There are several giant chess games here and even if don’t play it can be fun to watch others doing so. 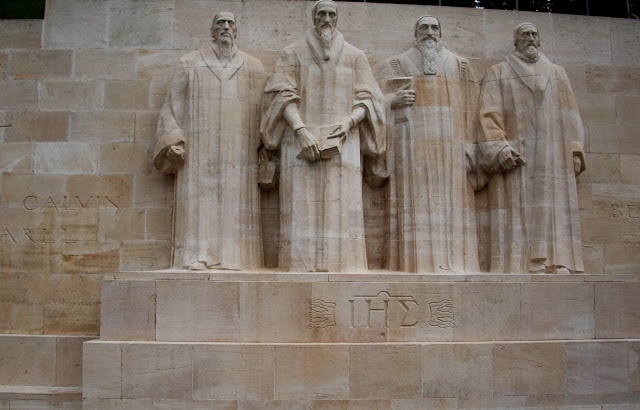 On one side of Parc des Bastions is the Reformation Wall. This was built into the old city walls to celebrate John Calvin’s 400th birthday in 1909. It’s the Protestant Reformation in a large type, with huge relief statues of the key figures of the radical religious movement from William Farel to Oliver Cromwell.

Look out for the carving of renowned Scottish Calvinist John Knox, preaching from his Edinburgh pulpit.

This pretty stretch of grass and woodland on Quai Gustave Ador has several features, including a floral clock (L’horloge fleurie). The flowers are planted with interlocking circular flower beds representing Geneva’s connection to watch-making. 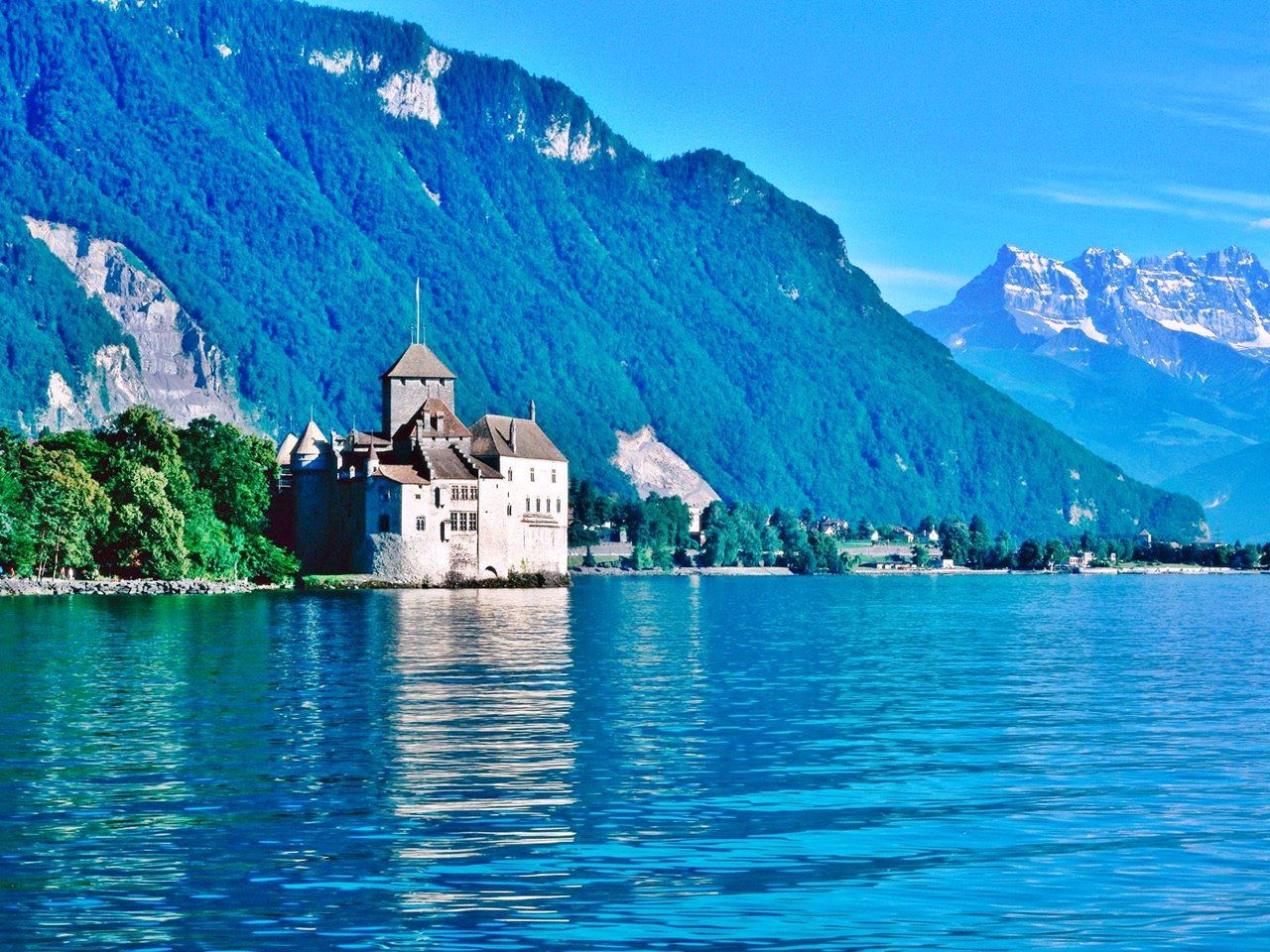 There are plenty of boat tours that leave from one of Geneva’s four docks at Pâquis, Mont-Blanc, Jardin-Anglais and Eaux-Vives.

One of the best views comes by taking a cruise towards the upper eastern portion of the lake.

Book a cruise on Lake Geneva

You’ve surely heard of The Red Cross; the international humanitarian movement with over 97 million volunteers, members and staff worldwide. In Geneva, you can see the very first Red Cross building and visit the museum, which takes a look into the history of humanitarian action.

Around 10% of all Genevans live in this neighbourhood near the centre. This area is chaotic, young and bohemian and is almost the opposite of what you expect when you think ‘Geneva’. Explore Les Grottes for cafes, theatres, cinemas, left-field independent shops and colourful buildings.

It’s a great place to head to if you’re looking for things to do in Geneva at night thanks to the bountiful entertainment on offer.

This student institution, Chez ma cousine, has the strapline ‘On y mange du poulet’ (we eat chicken). Go here for big portions of chicken, potatoes and salad at an incredible price.

If you’re in Geneva in the summer be sure to check out CineTransit. During this event, you can watch a movie for free in Parc de la Perle du Lac.

Geneva’s biggest festival takes place in the second week of December. It’s lots of fun and involves plenty of sweet marzipan-filled marmites en chocolat (chocolate cauldrons). Torchlit processions light up the Vieille Ville and a bonfire is lit in the cathedral square to celebrate the defeat of Savoy troops in 1602.