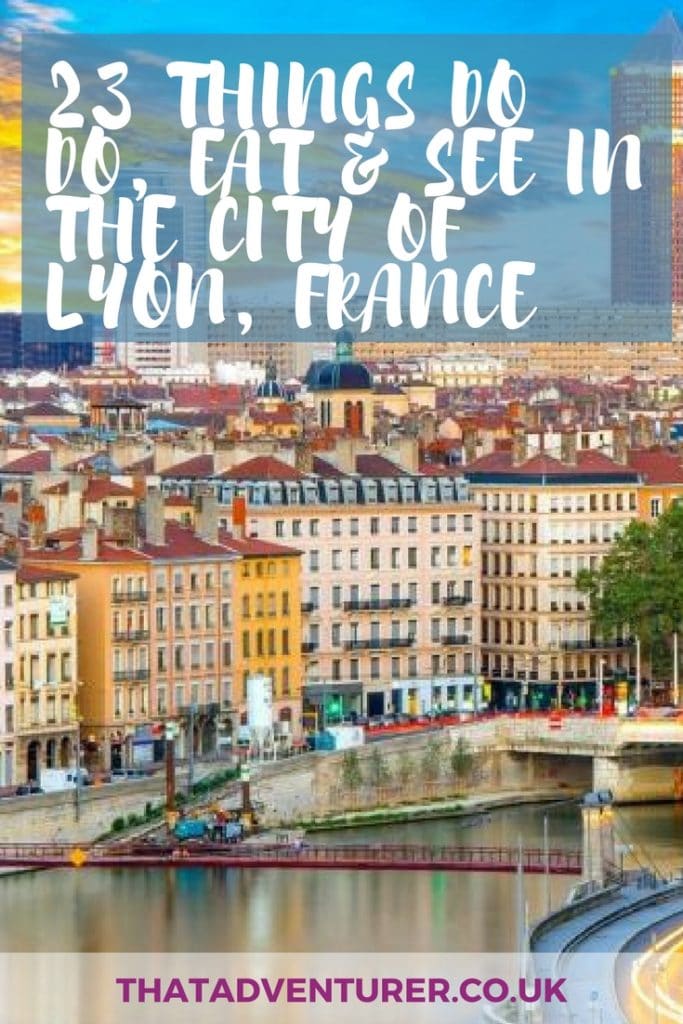 When I lived in Grenoble I took a trip out to Lyon a couple of times. These two French cities are pretty close by but Lyon is far more cosmopolitan with more shopping, Michelin star restaurants in Lyon and more. If you’re planning a weekend in Lyon or a holiday in Lyon then check out this list of things to see in Lyon for your Lyon itinerary. 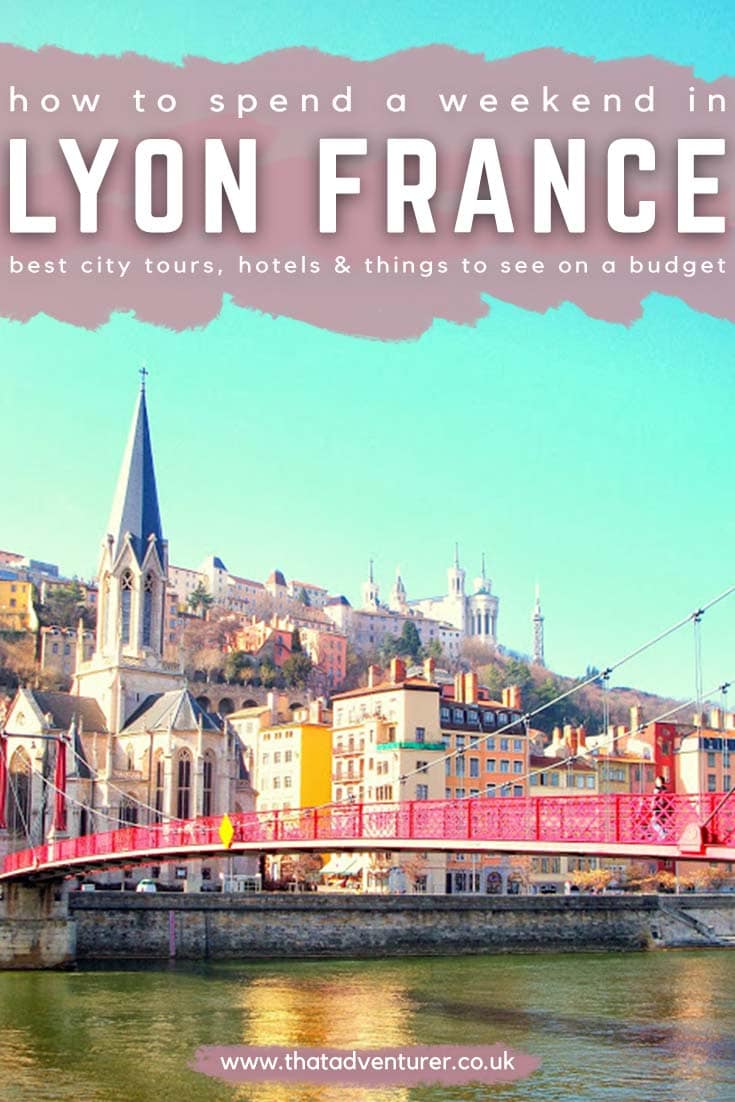 Lyon is France’s third largest city and second largest urban area in France. Because of this, it’s often referred to as France’s “second city” (after Paris).

If you’re wondering what the river in Lyon, France is then the first thing to know is that there are actually two rivers in Lyon as the city of Lyon sits at the confluence of the Rhône and the Saône Rivers.

Lyon is perhaps best known for its delicious food. In fact, I’d say it’s almost a crime to leave Lyon without having sampled some Lyonnais specialities in a bouchon (the word given to a restaurant that serves Lyonnaise cuisine).

It’s not all about food though, Lyon also has incredible architecture and part of the city is registered as a UNESCO World Heritage Site.

Lyon is in France but if you’re wondering exactly where is Lyon in France then here you go… Lyon is in eastern France in the Auvergne-Rhône-Alpes region. It’s 150km west from Geneva in Switzerland and 465km south of Paris.

How to get to Lyon

Getting to Lyon from the UK is very easy as it’s well served by all forms of transport.

Flights to Lyon from London take about 1 hour 40 minutes if you fly direct to Lyon Saint Exupery. They’re also pretty cheap with a return ticket costing around £60.

I always use Skyscanner to find cheap flights when I know when I want to go. However, I’ve also recently signed up to Dollar Flight Club who send emails full of cheap flight deals. On average their recipients save $500 a flight which is pretty incredible!

You can also catch a bus directly from London’s Victoria Coach Station to Lyon, Gare Perrache. Getting the bus to Lyon takes the longest out of these forms of travel. The bus will take you almost 21 hours compared to under 2 hours flying.

Omio has return tickets from London to Lyon for about £70.

My favourite way to travel in France is to get the train. However, when it comes to travelling between London and Lyon, getting the train is the most expensive.

Whilst the train doesn’t go directly from London to Lyon it is a pleasant way to travel and is more relaxed than flying with all the hanging around in the terminal, and more comfortable than the bus. I enjoy watching the French countryside outside the window as you travel.

Return tickets cost about £160 but you may be able to get cheaper if you’re under 27 as SNCF has discount youth tickets for those aged 12-27.

Where to stay in Lyon

There are plenty of great Lyon hotels and they don’t have to be expensive either! Some of the best hotels in Lyon are also suitable for people looking for budget hotels in Lyon. I’ve picked out some of the top-rated Lyon accommodation which includes cheap hotels in Lyon, France, hotels in Lyon city centre, and a Lyon hostel if hostels are more your style.

If you’re wondering what to do in Lyon, France and are looking for something different, check out these awesome Lyon city tours and the Lyon Card which will save you a tone of money during your trip to Lyon.

If you’re looking to save money on your week end in Lyon and plan on seeing a lot of the top Lyon tourist attractions then make sure to look into getting a Lyon City Card.

With the Lyon Card, you can visit 22 museums for free and get a load of discounts on more top attractions in Lyon! PLUS the card gives you free public transport for the duration of your card. It’s one of the best ways to tick off all the places to visit in Lyon on your list and on a budget.

Buy a Lyon Card here. If you’re coming from the airport then this one also includes an airport transfer with the City Card.

These city tours are a fun way to explore the city by doing something different and meeting new people. They’re also great if you’re not sure exactly what to see in Lyon.

The top things to do in Lyon, France 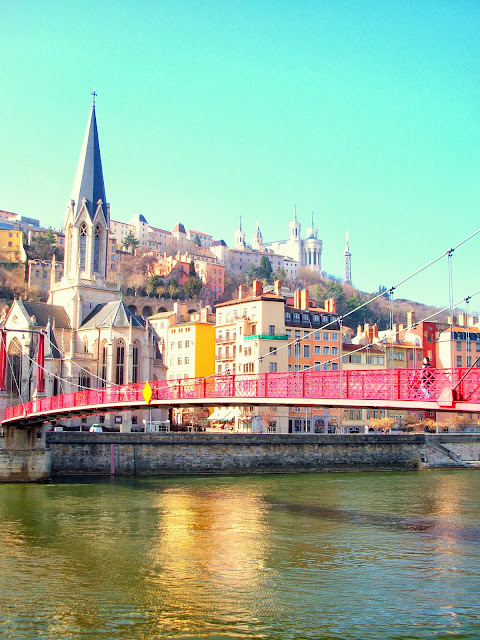 Head up the Saône for about 7km and you’ll come across triple Michelin starred restaurant, L’Auberge du Pont des Collonges. This is without a doubt one of the best restaurants in Lyon, France as it’s where one of the city’s most awarded chefs, Paul Bocuse, works.

Here he serves classics such as braised sweetbreads, roasted rack of lamb and his signature “Soupe VGE” (a truffle soup created for French president Valéry Giscard d’Estaing in the 70s).

For four days in early December, La Fete des Lumieres comes to Lyon. Here some amazing light and sound shows take place projected onto buildings around the city. It’s Lyon’s biggest festival and hotels book up early. If you’re keen to visit Lyon during this event, plan well in advance.

If you’re starting your day in Croix Rousse then make sure to head to L’Instant. This cafe and boulangerie overlooks Place Marcel Bertone and offers a continental breakfast on weekdays, with brunch at the weekend. There’s plenty of outside seating too for warmer days.

Lyon’s newest neighbourhood centres around the point where the two rivers meet. What was once an industrial wasteland has been transformed into a brand new area complete with museums and eateries.

France’s second-biggest flea market, Les Puces du Canal, has over 400 exhibitors. It’s a fun way to while away a Sunday morning as you browse the antiques and search for treasures!

Parc de la Tete d’Or is a great place to relax after some busy days exploring everything there is to do in Lyon. It spans 117 hectares and has a lake, botanic gardens, rose gardens a zoo and a tourist train!

If you’re a cheese lover then make sure to swing by L’Instant Fromage. You can try individual portions of over 36 French cheeses from the chalkboard menu here. If you find it too hard to pick (and who wouldn’t?), let them surprise you with an “ardoise découverte” (five kinds of cheese for around €13.50). You can add some charcuterie, tartines and salad to the side too.

This cafe is a favourite with students and Croix Rousse locals. It’s a relaxing spot for a Sunday brunch, a place to pick up a pastry or grab a coffee.

During the summer, free summer concerts take place under the Opéra’s arches. The music includes; swing, blues, funk and jazz. Arrive early to secure a table and grab one of the waiters to get you a drink while the music plays on. The sets last about an hour and start at 7 pm, 8.15 pm and 10 pm.

A trendy cocktail bar, Monkey Club, is popular with students and the newly graduated. There are some great cocktails here as well as charcuterie and cheese platters.

If you’re not sure where to eat in Lyon then a good place to start is Marché St-Antoine. Marché St-Antoine is just one of Lyon’s food markets and it’s rammed full of delicious looking produce.

If you’re staying in Lyon for a while head here in the morning and pick up some goodies for a picnic or nice dinner.

Love books and beer? You’ll love Smoking Dog. It’s a bookshelf-lined pub in St Paul and is a great place for bibliophiles. 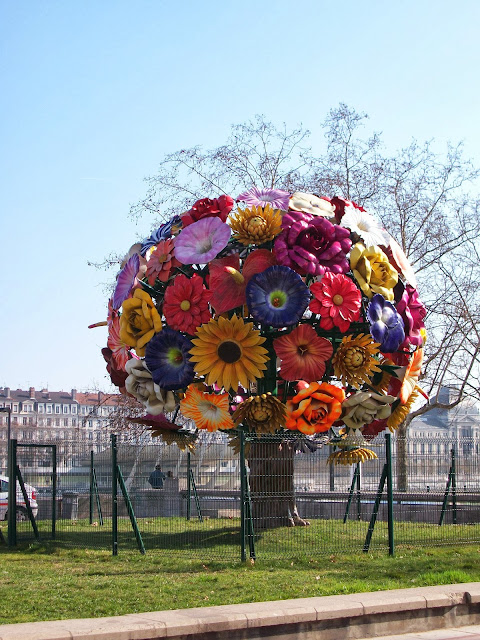 The flower tree was first created in 2003 and now has a permanent home in Lyon. It’s huge and consists of 85 individual plastic flowers, each as large as a car door, grouped together as though grown like a tree. Some view it as an eyesore in amongst the old buildings – what about you?

In Lyon’s old town and La Croix Rousse are Les Traboules. They’re renaissance passageways, of which about 40 remain open to the public. They run underneath the buildings along the Saône River and are fun to explore. The best place to start your Traboules adventure is around Quai Fulchiron Rolland and Rue des Trois Maries.

An upmarket bouchon, Le Poêlon D’Or, is well known among local foodies who swear by it’s around andouillette and pike dumplings. Be sure to leave room for the chocolate mousse!

Lyon’s famous indoor food market has around 60 stalls selling foodie treats. Get some St Marcellin, some meats and bread and head out for a picnic during summer. Or join the locals on a Sunday for a leisurely brunch with plenty of shellfish and white wine.

18. Rent a bicycle in the city

Lyon was the first city in Europe to have a bike rental service (Vélib) and there’s a great network of wide, safe cycle paths which run all over the city. Some of the prettiest routes run along the rivers and the routes tend not to climb hills which is even better!

You can also take some fun guided cycling tours in Lyon.

Lyon’s old town must be on everyone’s list of things to do in Lyon. The winding alleyways are picturesque and there’s some great food tucked away down the cobbled streets. Begin by exploring around Rue du Boeuf and the Place Neuve Saint-Jean then head to Rue Saint-Jean and Rue des Trois Maries. Take your time and enjoy!

If you want to know more about what you’re seeing, consider taking a walking tour of the city. This Lyon Old Town walking tour is customisable depending on your own interests. 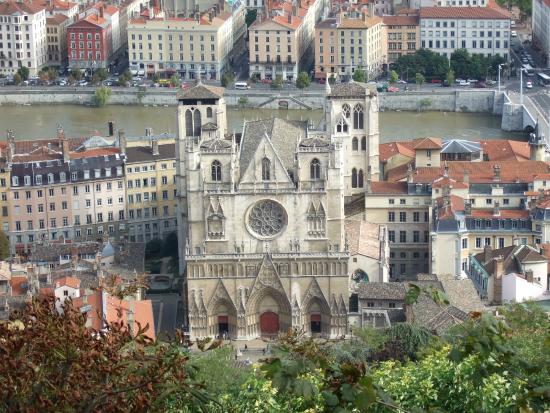 The magnificent Cathedral of Saint-John is renowned for its stained glass windows and massive bell which even has its own name! The Anne Marie de la Primatiale is one of the largest bells ever made and is only rung on Catholic feast days. For a good view of the cathedral from a distance, go to the embankment near the Pont Bonaparte.

Locals call this Basilique an ‘upside down elephant’ but this 19th century white basilica dominates the Lyon skyline and is worth visiting. You can either climb the stairs or take the funicular that runs up and down the hill. The inside is extremely ornate and it’ll amaze you when you think back to how much work must’ve gone into them!

Next door to Fourvière is a well preserved Roman amphitheatre. You can wander it daily or go one step further by visiting Lyon during Les Nuits de Fourvière. During this festival, shows take place at the amphitheatre which is incredibly cool!

23. Hang out in Croix Rousse

Need a dose of hipster on your trip to Lyon? Head to Croix Rousse where you can get fuel your flat whites and street art needs. Browse the second-hand shops and head to Crock N Roll for a croque monsieur with edge.

If you’re looking for day trips from Lyon or more French holiday ideas check out these posts below: