In 2013 I was invited on a trip to Venice with my university rowing club of which I was a part. We were to take part in the 2nd International University Regata. The fastest boats would then go on to race in the Regata Storica event which takes place annually along Venice’s Grand Canal.

Whilst our boats weren’t one of the winners, we still go to join a procession down Venice’s Grand Canal. Rowing down this historic canal in a massive parade is a once in a life time experience and something I’ll never forget.

If you’re visiting Venice during the Regata Storica it’s well worth setting a day aside to enjoy the racing, the boats and the jovial atmosphere.

A guide to Venice’s Regata Storica 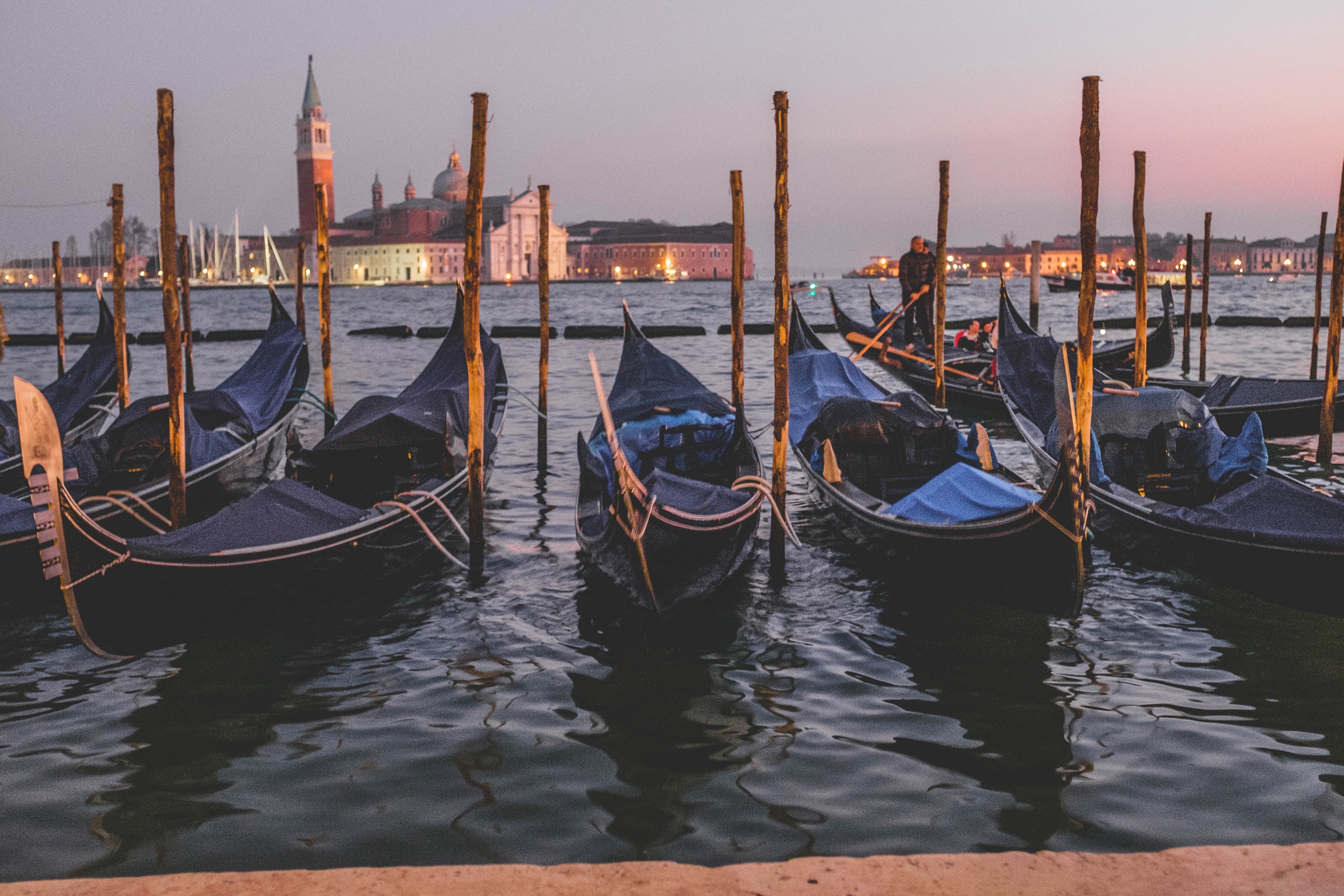 What is the Regata Storica?

Regata Storica is one of the most important (and probably most spectacular) event held in Venice. It’s been held since the early 1800s and thousands of Venetians turn out to indulge in gondola racing and festivities.

The event involves a parade and then a series of races which sees competitors paddle from Sant’Elena island until the railway station. I can attest to the fact that rowing in these boats is hard work!

When it the event held?

What happens during the event?

The event can be split into two main sections. There’s the parade and then the boat races.

The boat parade involves replicas of 15th Century boats. There’s the famous Bucintoro which is said to represent the serene city; the bucio which was use by the Duke or Venice; the bissioni which is an 8 oared gondola and the balotine which is a six oared gondola.

When I took part in the parade we rowed in an 8 oared gondola and the rowing technique is a bit different to what we were used to!

After the parade comes the racing. First there are children races, then the women then the boats with six men followed by the eight man boats.

Every Venetian neighbourhood has its own team and you’ll see (and hear) plenty of locals cheering on their team.

How can I watch the Regata Storica? 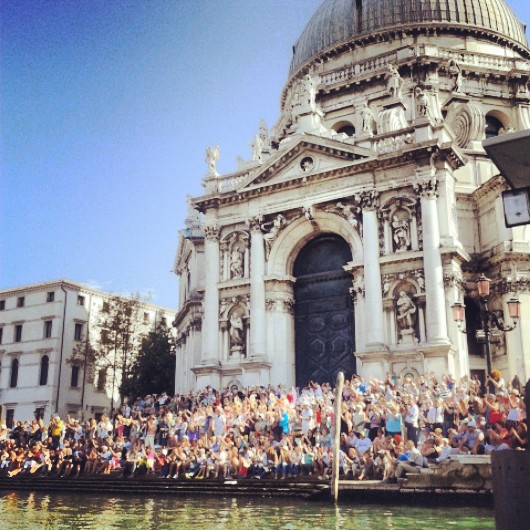 Expect Venice to be very crowded around the Grand Canal during Regata Storica. Many locals will be watching the race from their boat so if you want a really good spot to watch the parade and the races you might want to try and make friends with a local!

We watched the races from a window of a building that had a terrace looking out onto the canal. I can’t remember exactly what building this was, but I believe it had something to do with the university that was hosting us for the weekend.

You can also buy tickets for the floating stand near the Campo San Vio. Tickets cost 60 euros (30 euros for under 18 and for Venetian residents). However, it’s probably better to save your money and just wander along the canal until you find a good spot. Near the Punta della Dogana is a good spot to head to.

Otherwise consider the route the boats taking part in Regata Storica take. They’ll head from the Castello area and go west up the Grand Canal towards Santa Chiara. Here they turn round and race back to the finishing line at Ca’Foscari Palace. 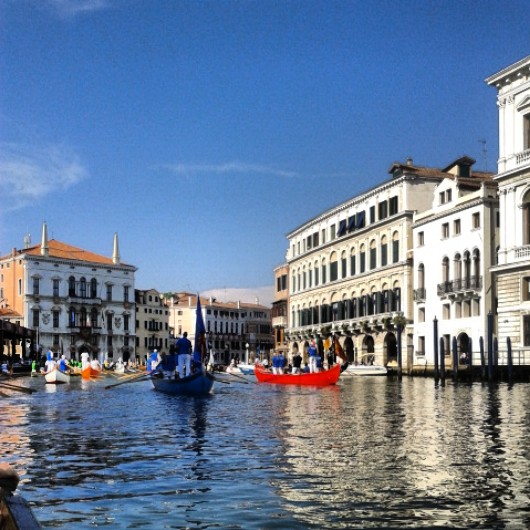 Where should I stay in Venice?

Take a look at the Airbnb’s in Venice. Alternatively you could try these hotels which are all under £50 a night with great reviews and not far from the action.

What you should pack for the Regata Storica

How to get there and away

There are plenty of flights to Venice from the UK with most landing at the Marco Polo airport. However, double check this as budget airlines such as Ryanair will probably drop you off at Treviso airport which is an hour’s bus ride away.

To get from the airport to downtown Venice you can take a water bus (vaporetto) to Piazzale Roma, then a water bus to your hotel. This should cost you less than $10 total.

Alternatively you can take the 15euro Alilaguna traghetto ferry straight to San Marco. 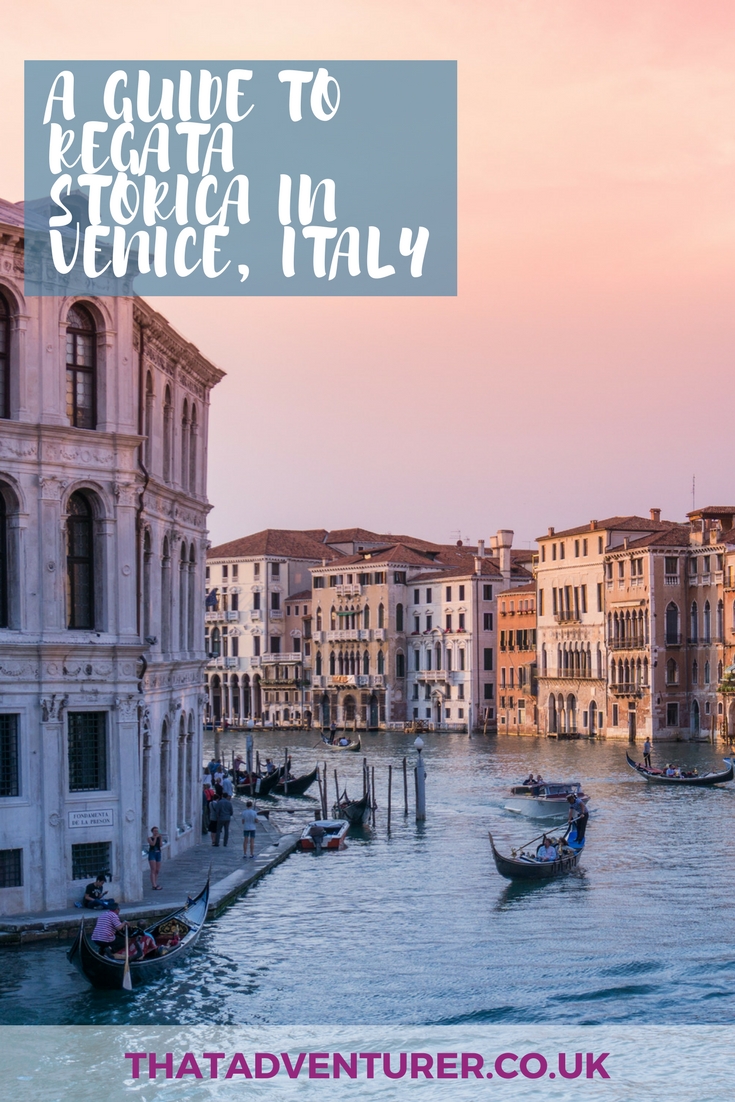 Even if you didn't win, it must have been great rowing on the Grand Canal!

It was fantastic! Such a cool thing to do!