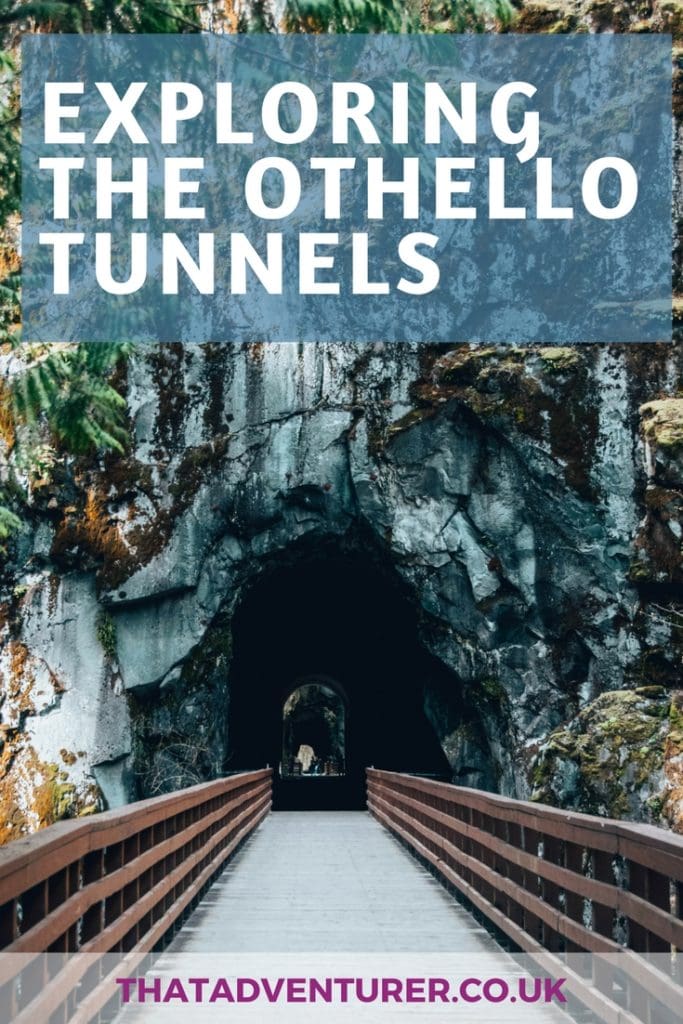 Another place on my BC bucket list that exists solely in my head and grows everyday, were the Othello Tunnels. The Othello Tunnels are just north of Hope (about 1.5 hours east of Vancouver) and combined perfectly with the Chilliwack Tulip Festival and the Ladner Creek Trestle.

Thom and I had driven past them before. First in October on our way to Penticton and the Okanagan, and then again over Christmas on our way to Revelstoke. However, the trail had been closed for winter both times.

On a recent and spontaneous road trip with a friend we stopped off at the Othello Tunnels since most of the snow had gone.

NOTE: Due to the flooding of November 2021 Othello Tunnels is closed.

About the Othello Tunnels The Othello Tunnels form part of the Coquihalla Canyon Recreation Area. They’re in a scenic area of the Cascade Mountains and while exploring the tunnels you’ll see a beautiful river canyon and forest.

The tunnels were created in the early 1900s when it was decided that a railway was needed to connect the Kootenay region with the coast. This railway became known as the Kettle Valley Railway which, whilst no longer in use, is still a popular hiking and cycling route.

The trickiest part of the railway was the Coquihalla gorge. It was decided that a straight line of tunnels could be dug through the rock creating what we know today as the Othello Tunnels.

The chief engineer, McCulloch, was a fan of Shakespeare and so many of the stations along the railway were named after Shakespeare’s characters. The tunnels in the Coquihalla Canyon were near the Othello station – thus, Othello Tunnels.

Once finished the railway ran between Vancouver and Nelson but was plagued with snow and rockslides. On November 23, 1959, a washout was reported and was considered too large to fix. The railway was abandoned in July of 1961 and the tunnels and surrounding area became a provincial park in 1998.

Hiking to the Othello Tunnels 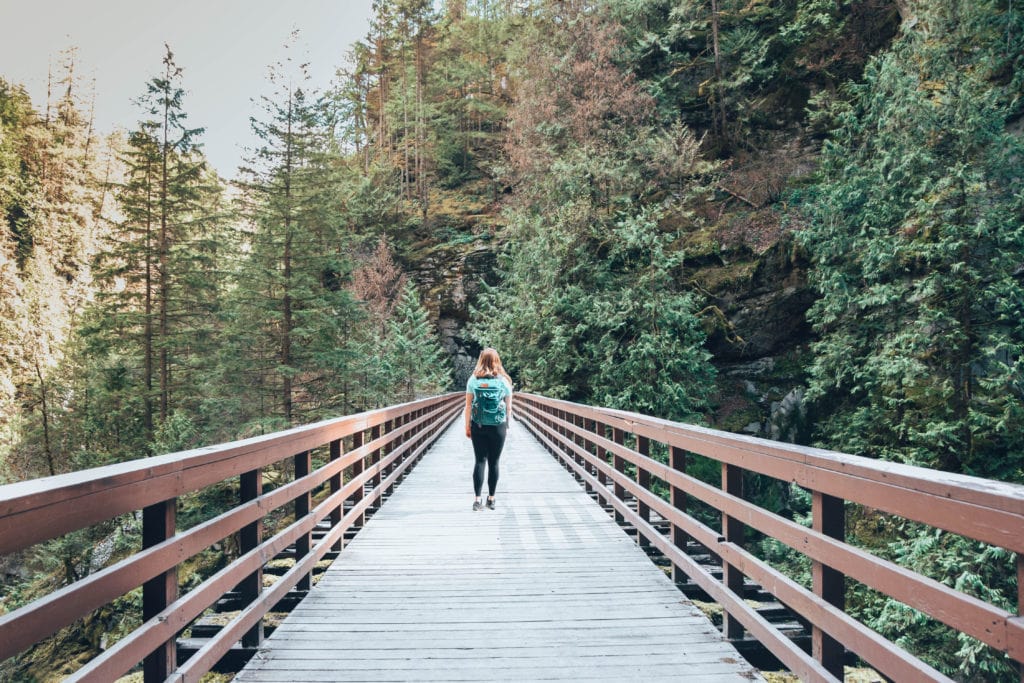 There are a couple of different hiking routes you can do once you get to the parking lot for the Othello Tunnels. You can either take a short 2.8km hike to the end of the tunnels and back. Or, you can take the tunnel loop hike which is about 5.5km.

Since we tacked a visit to the Othello Tunnels on to a pretty jam packed day, we opted for the shorter 2.8km hike to the end of the four tunnels and back. From the parking lot, follow the signs ‘To the tunnels’ alongside the Coquihalla River. Before long you’ll see the first tunnel. Walking through this tunnel plunges you into darkness for a while. You’ll then come outside for a short while before the second tunnel.

After leaving the second tunnel you’ll cross a bridge. Here you can see the roaring Coquihalla River below.  Tunnel 3 sees you cross another bridge before heading through tunnel #4 where the trail ends. From the parking lot, head north west and follow signs that say ‘Tunnels Loop’. The longer loop hike takes you up through some beautiful forest and ends with the Othello Tunnels. Most visitors to the Othello Tunnels take the shorter hike, so the loop route is a good way to escape crowds and explore more of the surrounding area.

How to get to the Othello Tunnels from Vancouver From Vancouver take exit #183 Othello Road on the Coquihalla Highway. Once you’ve taken the exit the road follows underneath the highway and continues west along Othello Road. Follow this road for about 3km and bear left onto Tunnel Road signposted ‘Coquihalla Provincial Park’.

Make a day of it! Place to visit nearby

This is a really nice article highlighting our Othello Tunnels that as residents of Hope, we have been proud of. Unfortunately, with the 2021 floods that occured, Othello Tunnels are not a tourist option and may not ever be again. The floods devastated the area. So if it's a plan to visit the Tunnels, find out if they are open yet. Otherwise, there are other wonderful things to do in Hope. Come and visit us.

Hi there, I'm planning a family trip to Hope, BC at the end of this month and this is very helpful post! This Othello Tunnel seems like a great place to explore. Thanks!!

Thank you! have a great time! My boyfriend says the tunnels are better than they look in the photos!