Since moving to Vancouver last June I’ve been desperate to visit a trestle; old railway bridges no longer in use. There’s plenty all around BC but one of the easiest to get to from Vancouver is Ladner Creek Trestle just east of Vancouver. The old bridge is very impressive and it’s amazing to think that this was actually used by trains in the past! Visiting Ladner Trestle is ideal as a day trip from Vancouver and can be combined with The Othello Tunnels and/or the Tulips of the Valley tulip festival in Chilliwack.

In May 2018 someone carelessly started a fire by dropping their cigarette butt. Whilst the steel frame of the bridge remains, most of the wood is likely to have burnt away. PLEASE remember to take out everything you pack in. NEVER leave rubbish or carelessly drop cigarettes as it ruins beautiful sites like this for everyone else.

Looking for more trestle bridges in BC? See this list of the best BC trestles to visit!

About the Ladner Creek Trestle 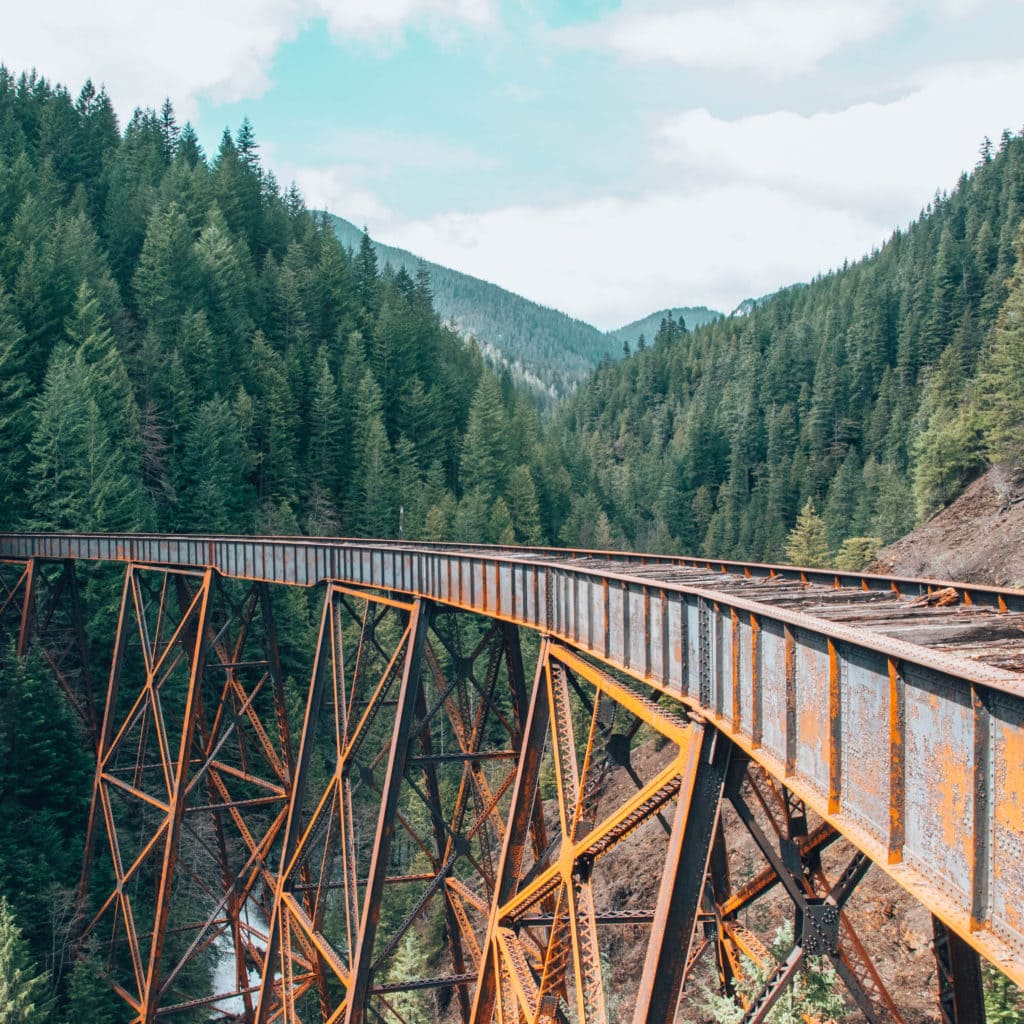 Sometimes called the Hope trestle bridge, due to its proximity to Hope, the Ladner Creek trestle is along the road leading up to the Coquihalla. It’s one of the coolest things to do in Hope, BC too.

Looking for an insight into Ladner Creek trestle history? The Lander Creek Trestle (old bridge) was part of the Kettle Valley Railway that ran across southern British Columbia. The railway opened in 1915 and was abandoned in part from 1961. The last trains ran on the part of the railway west of Penticton in 1989.

Nowadays much of the railway has been turned into a biking and hiking route so visitors can check out the abandoned train bridges of BC like this one, and the Myra Canyon trestles near Kelowna. The Kettle Valley Railway (KVR) also intertwines with the Trans-Canada trail which is a 42,000km trail across Canada.

Whilst the trestle is largely still intact, the wood has rotted which makes walking across the trestle an extremely bad idea. Do not attempt to. 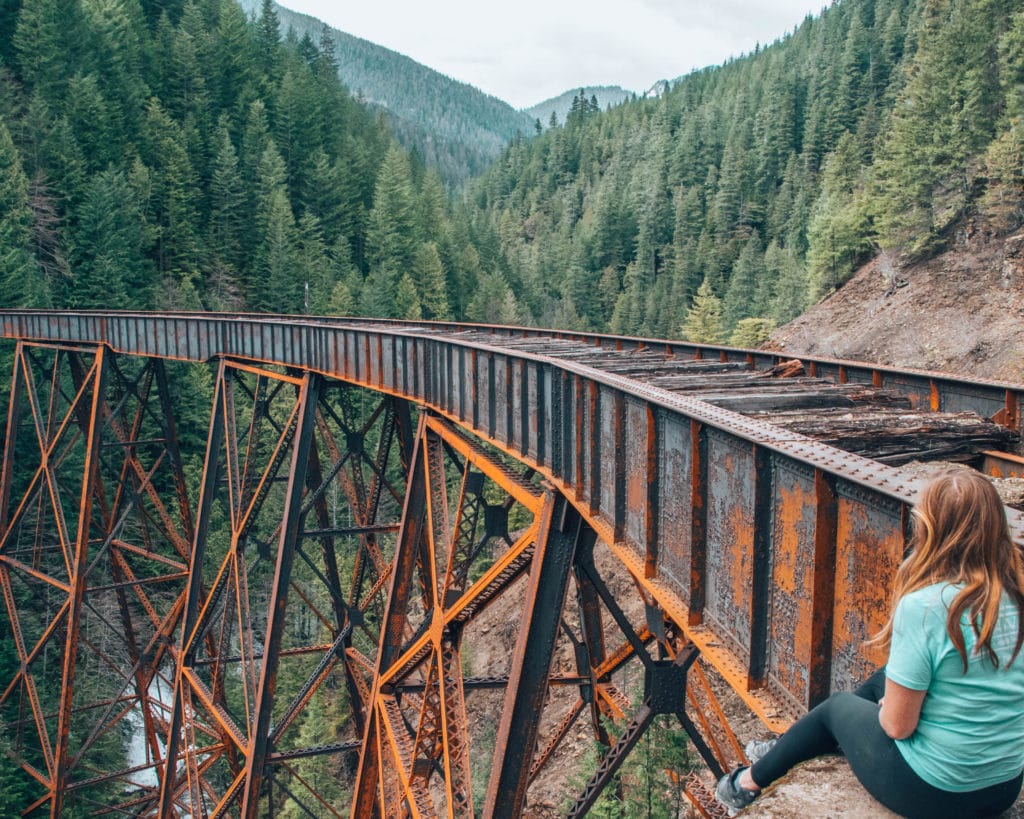 The hike to Ladner Creek Trestle bridge is short but does involve some steep, narrow and rubbly sections. The whole hike, out and back, should take no more than an hour.

Once you’ve found the trailhead (see instructions below), look for a trail on the hill to the left of the highway (as you’re facing the highway). The trail is a steep uphill climb at first for about 50m.

Whilst there are no trail markers, it’s pretty easy to see which way you should walk as the path is well-trodden.

After about 15 minutes you’ll come to a tunnel which is now blocked up. Here, the trail takes another steep uphill climb towards the left of the tunnel.

From up here, you get your first glimpse of the Ladner Creek bridge!

Watch you step as you walk/slide downhill to a small viewing area of Ladner bridge on the other side of the tunnel.

There are a few rocks to the left of the Ladner trestle bridge that you can walk on for an alternative view. However, the best view is in the little area directly before the trestle. Enjoy!

Here are the details about hiking to the hope trestle.

How to get to Ladner Creek Trestle from Vancouver 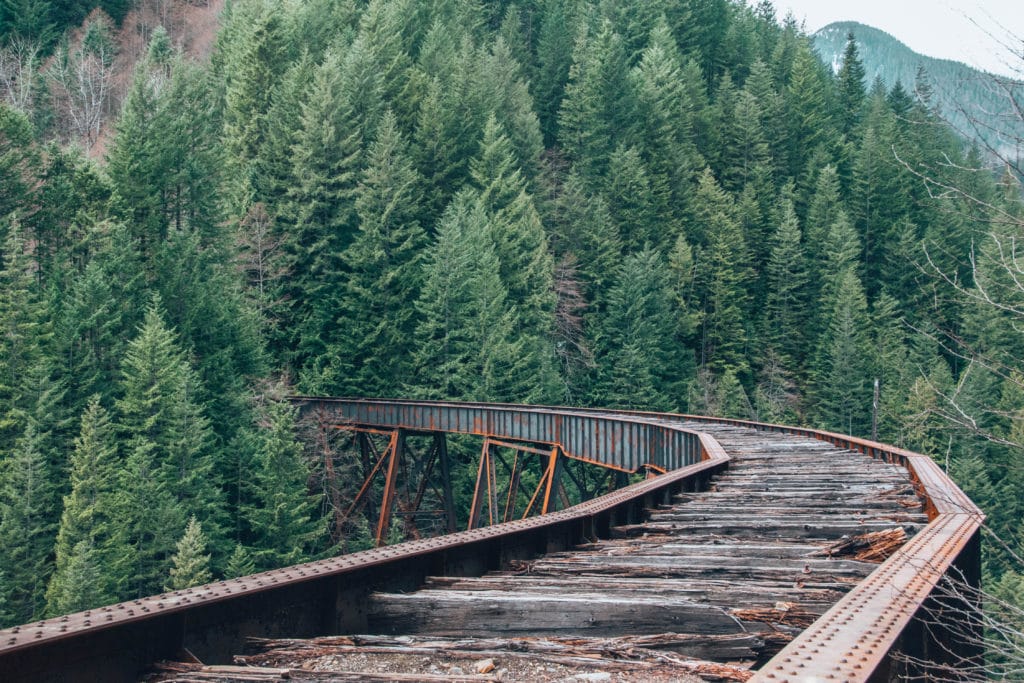 Finding the Ladner creek trailhead isn’t the easiest. It took us a few tries before we eventually found the correct pull off.

Do not use Google Maps and attempt to get it to direct you to the trestle. Google Maps will instruct you to take a turn off too early. It will then tell you to drive up a road blocked by a rather sketchy looking RV.

Instead drive eastbound on the Hwy/BC-1 E from Vancouver and take the BC-5 N (the Coquihalla, not the Crowsnest) fro Hope. Continue on this road until exit #202/Portia. This is a U-Turn route. Follow the U-turn under the bridge and rejoin the highway going back towards Hope.

Once you’ve rejoined keep things pretty slow so you don’t miss the turn-off! After a few minutes (after the Shylock Road exit) you’ll come to a bridge with a green sign saying ‘Ladner Creek’. The turn off is immediately before this bridge to the right.

Check out these other hikes near Vancouver.

A Springtime Fraser Valley Road Trip from Vancouver | That Adventurer

I'm visiting Vancouver in July and I can't wait to try and find this! Love your blog.

Thank you! I hope you have a fantastic time :) I love it here and this trestle was super cool to see!