Port Moody Breweries along the BC Ale Trail

I usually spend my weekends hiking, camping and road-tripping but every now and again my legs need a rest (especially after a long week of dog walking!). A few weeks ago that break meant heading out to explore some of the BC Ale Trail and the Port Moody brewery scene. Heading out to the Port Moody breweries makes a great day trip from Vancouver as you can get the sky train there and back from downtown Vancouver. That means there’s no need for a designated driver so everyone can join in on the fun. Plus, if someone in your group doesn’t drink beer, each brewery in the city of Port Moody also serves cider and wine. Don’t wait for Vancouver craft beer week, plan your own Vancouver beer festival using this guide to the Port Moody Ale Trail and the craft beer in Port Moody so you know where to go! 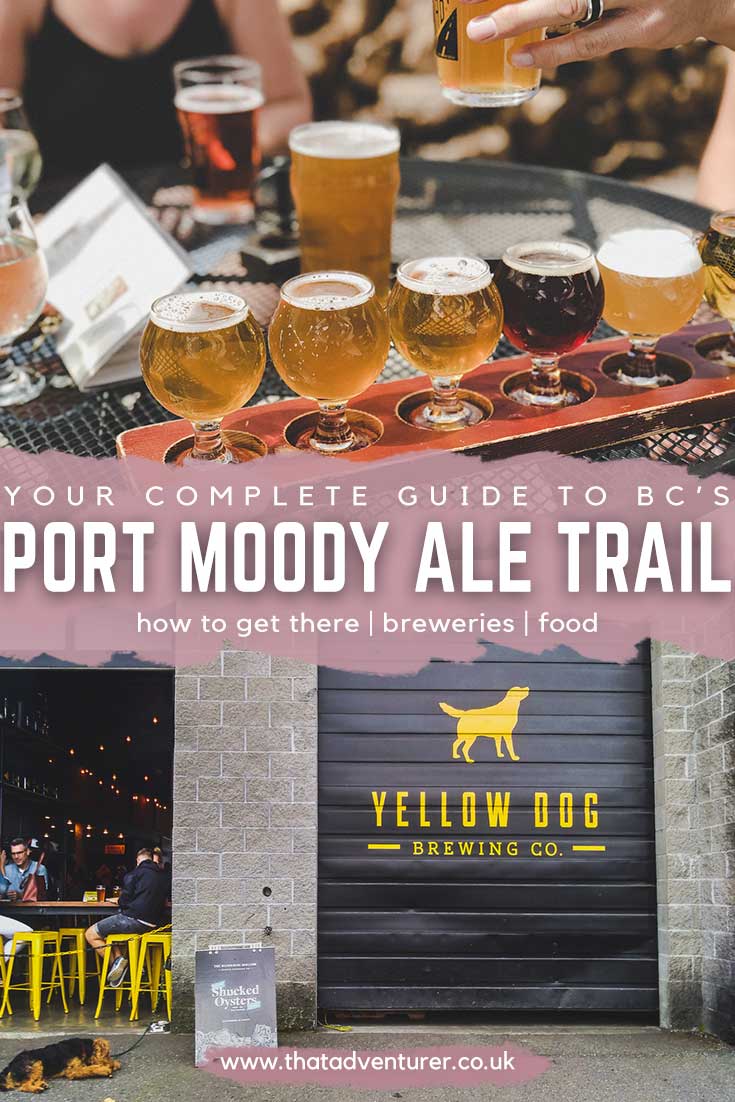 About the Port Moody Ale Trail

In 2013, two breweries opened up on the same street in Port Moody, BC which seemed an unlikely occurrence. Then, when a third Port Moody brewery opened also along Murray Street, people began to take notice. It wasn’t long before there was a fourth, and now a fifth, and Murray Street became known as “Brewers Row”. Nowadays checking out the ale trail is one of the best things to do in Port Moody and what was once a quiet, sleepy suburb is no more thanks to these 5 awesome breweries in Port Moody.

In BC, an Ale Trail is a self-guided tour which takes you to that areas best craft brewery destinations. There are several BC Ale Trails, including the Port Moody Ale Trail. Each one can claim to be home to some of the best breweries in Vancouver too.

It’s not all about the beer either, these trails also take in restaurants, cafes and activities which make it super easy to plan a day out.

One of the best things about the Port Moody ale trail is that it’s super easy to do as your own personal brewery tour. It’s easy to find your way there from downtown Vancouver, plus everything’s so close to each other you won’t get lost. However, if you’re looking for a brewery tour in downtown Vancouver then check out these options.

How to get to Port Moody from Vancouver

Travelling from downtown Vancouver to Port Moody couldn’t be easier thanks to the Skytrain. The closest station to the breweries in Port Moody is Moody Centre  (yes, that’s its real name!).

To get there from downtown, catch the expo line from Chinatown-Stadium Station to Commerical Station, then change to the Millennium Line all the way to Moody Centre. This takes about an hour in total and it’s roughly a 10-minute walk to the breweries, depending which end you start at.

The 5 main breweries in Port Moody are listed below, they also happen to be the makers of some of the best craft beer in BC. We planned to start from the west and work back towards the Skytrain station but the boys in our group were desperate for a beer. So we started at Parkside and then worked west and back east.

Getting from brewery to brewery is super easy since they’re pretty much next door to each other. 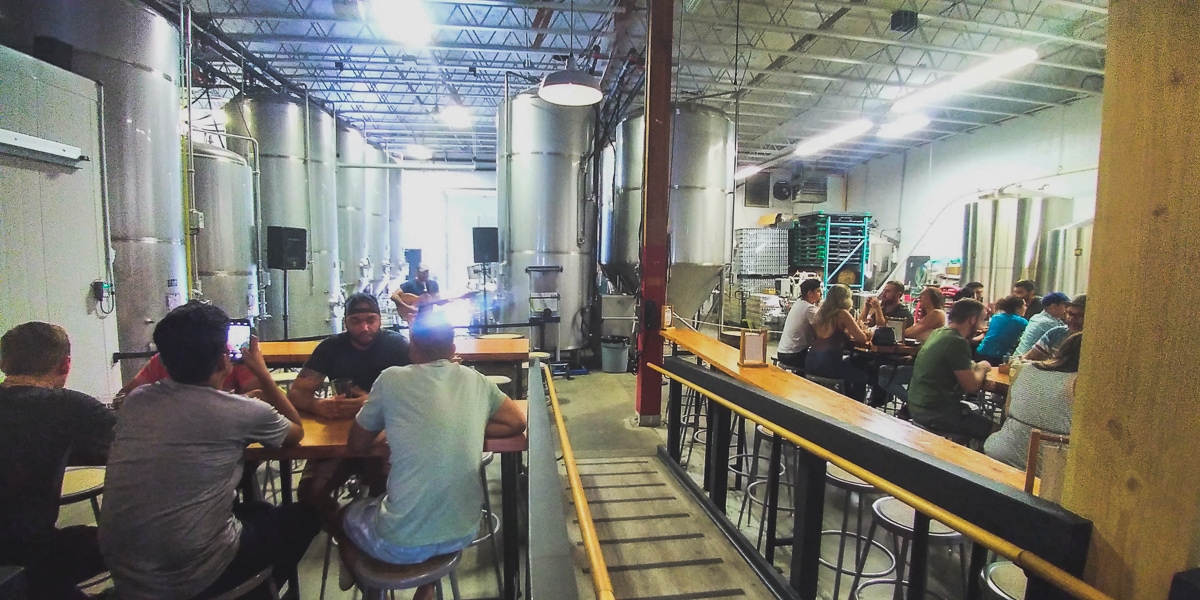 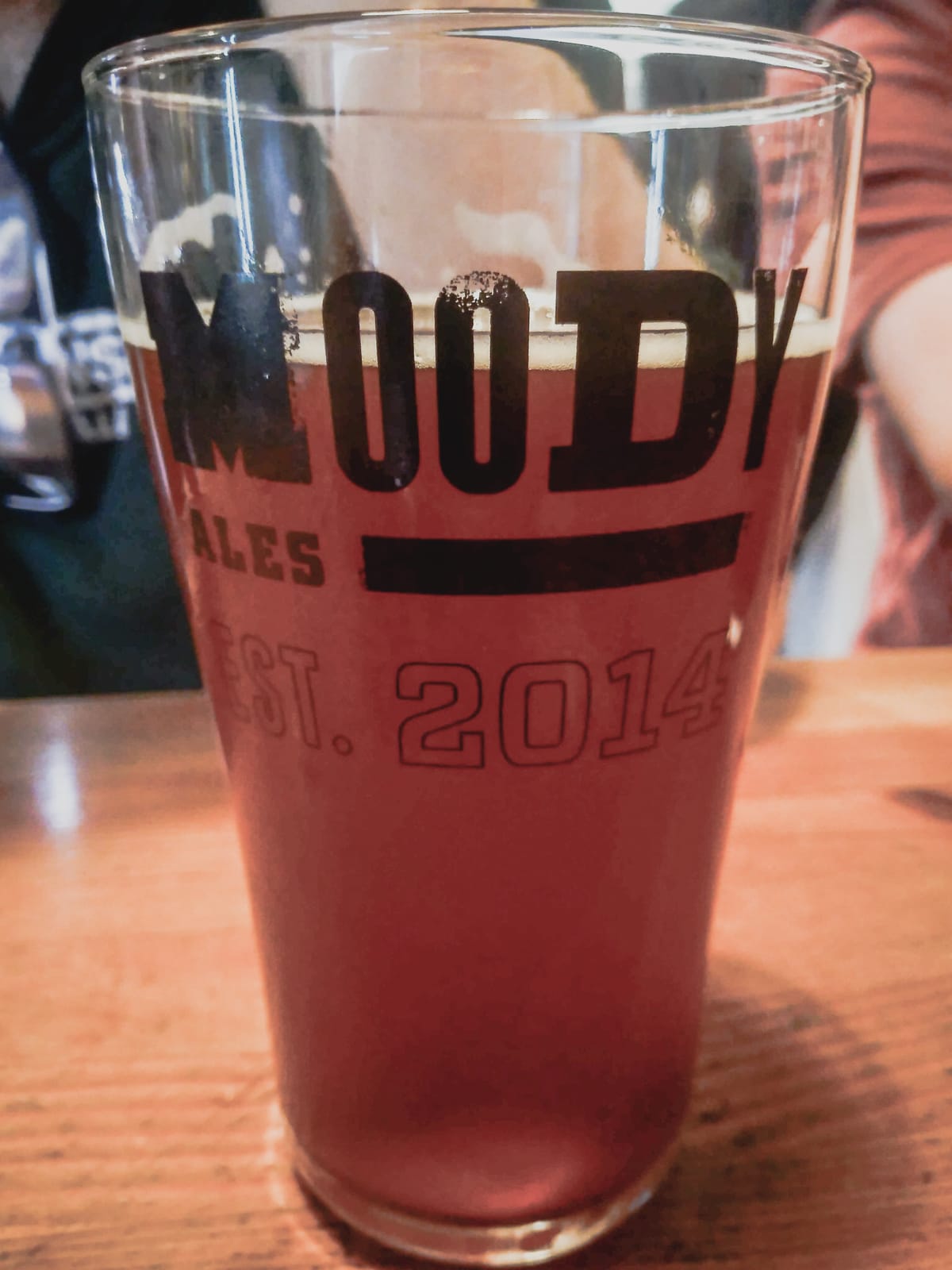 Moody Ales Brewery is usually the starting or finishing point for most people along the Port Moody Ale Trail. It’s a little further than some of the other breweries and so it tends to be a bit quieter. There’s a great patio, and inside you’ll often get lie music at the weekends.

This brewery has its roots in home brewing and has weekly experimental casks and small batches. You can see the brewing equipment while you drink too. 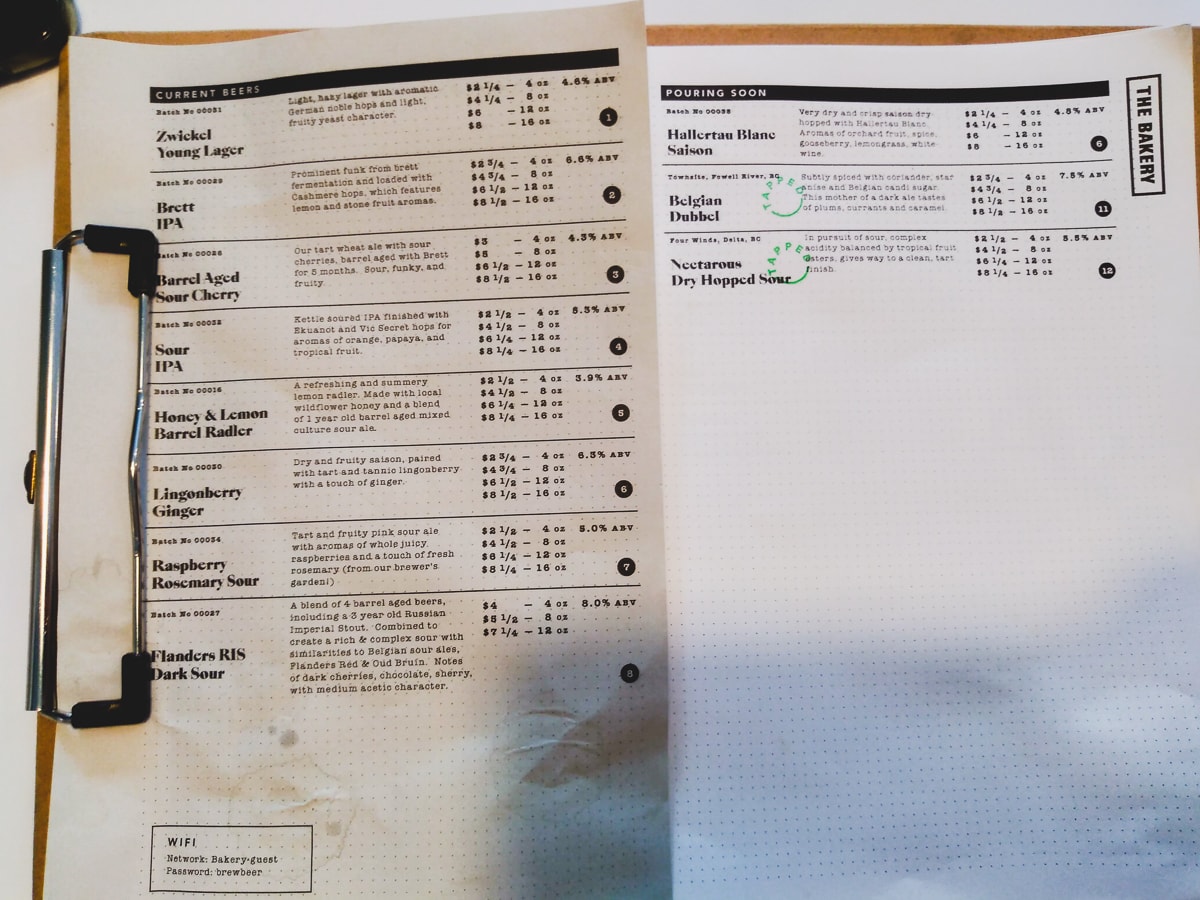 This is the newest brewery in Port Moody and it has a super cool interior. The Bakery Brewing is all about experimenting with styles, methods, and local ingredients. and their beers span across a wide range of styles. They brew in very small batches, so there’s always going to be something new on tap. Expect light clean ales, lagers, IPAs, mixed fermentations, and kettle sours.

If you’re looking for something different, this is the place to try! 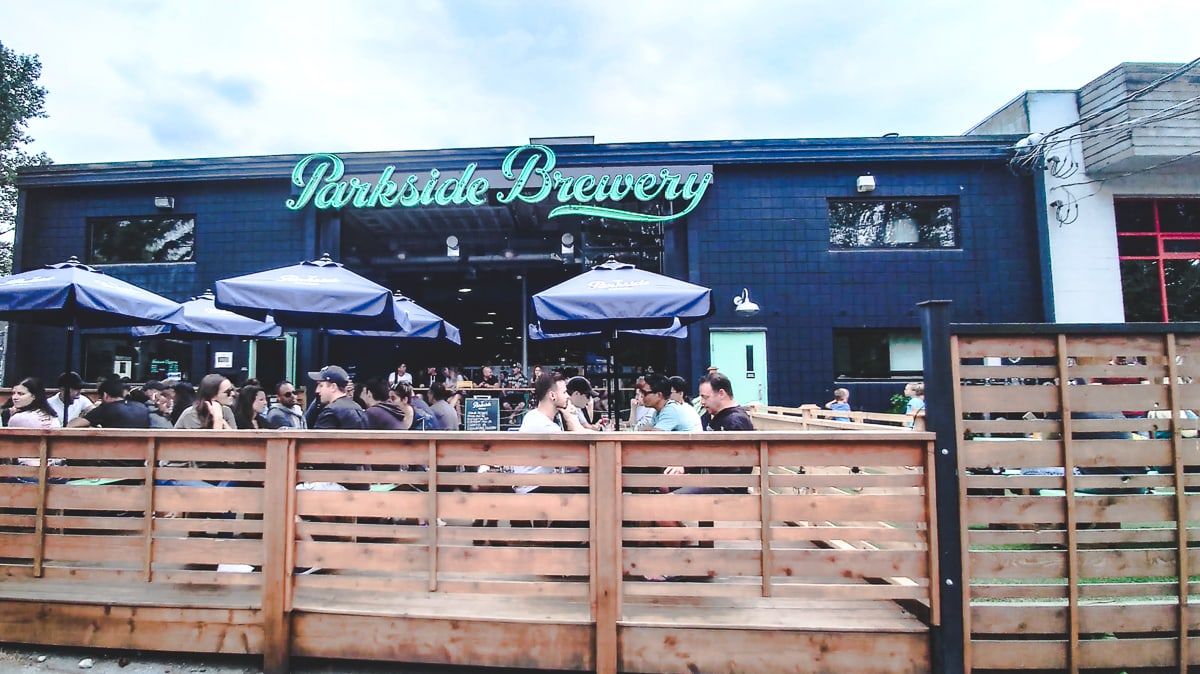 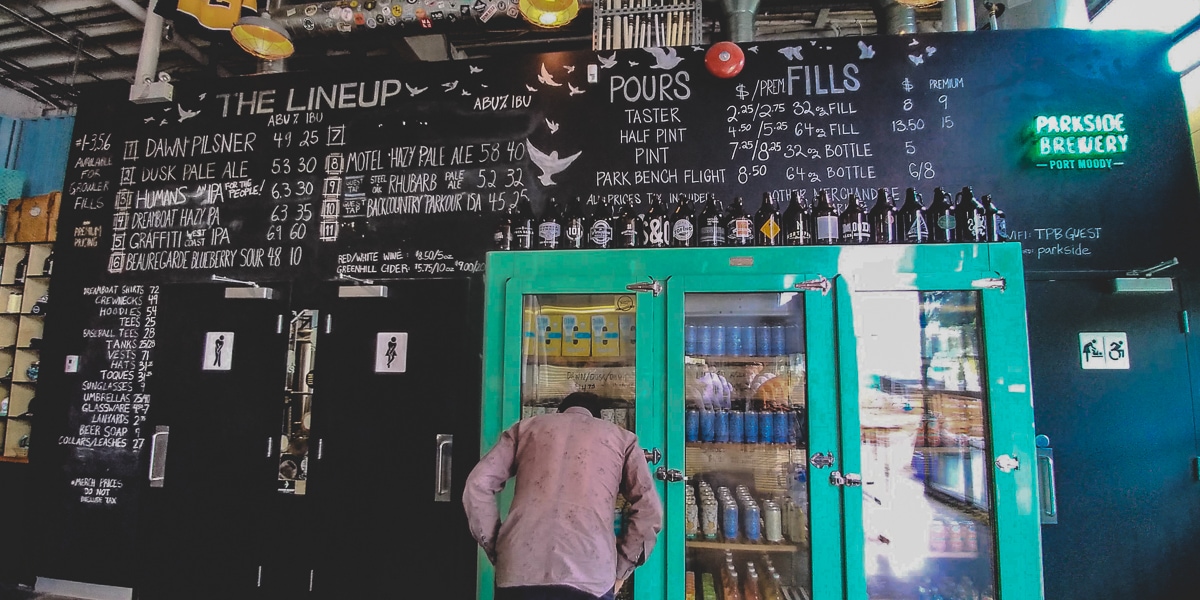 Parkside Brewing was the fourth brewery along Brewers Row and has a great size tasting room and patio opposite Rocky Point Park in Port Moody. The head brewer at Parkside Brewing is Vern Lambourne who spent years working at Granville Island Brewing. After Granville Island Brewing was bought by Molson-Coors, he kept making great beer and people still considered it “craft beer” despite it being owned by such a large company as he’s so respected within the industry.

They have everything from classic IPAs and Pilsners to Blueberry Sours and Peach IPAs. 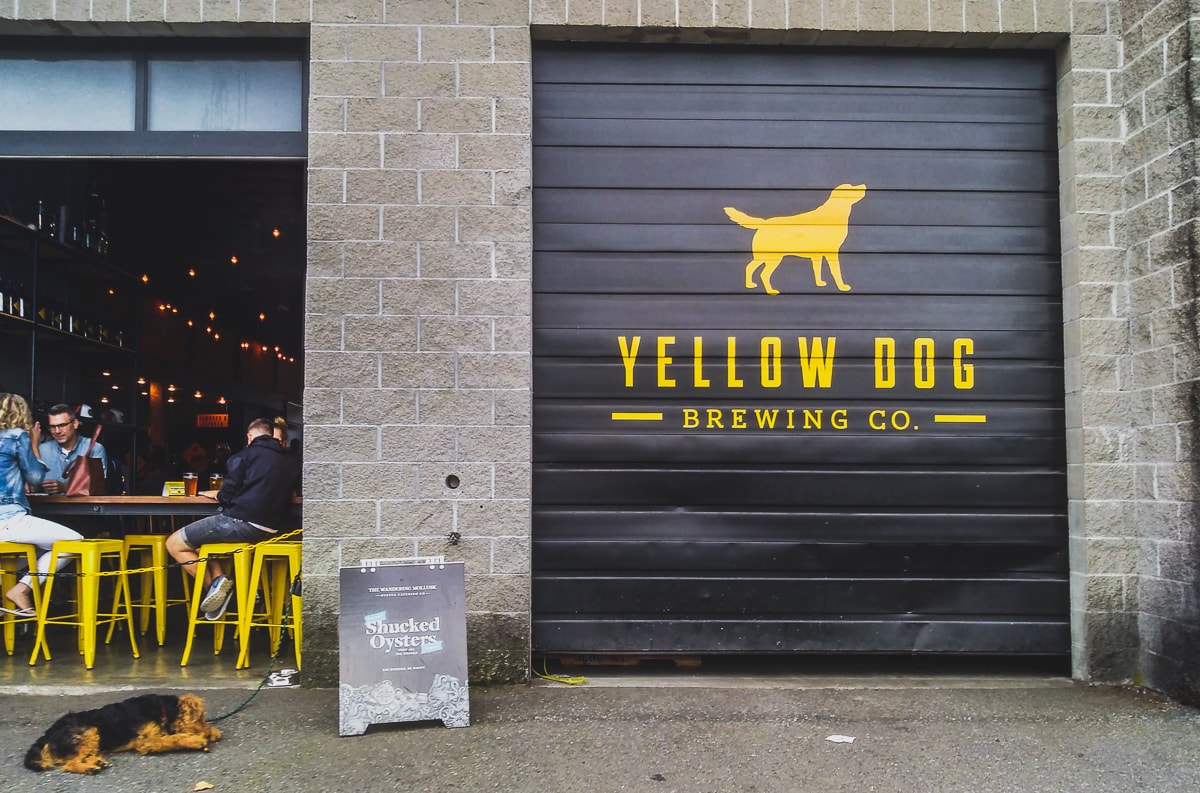 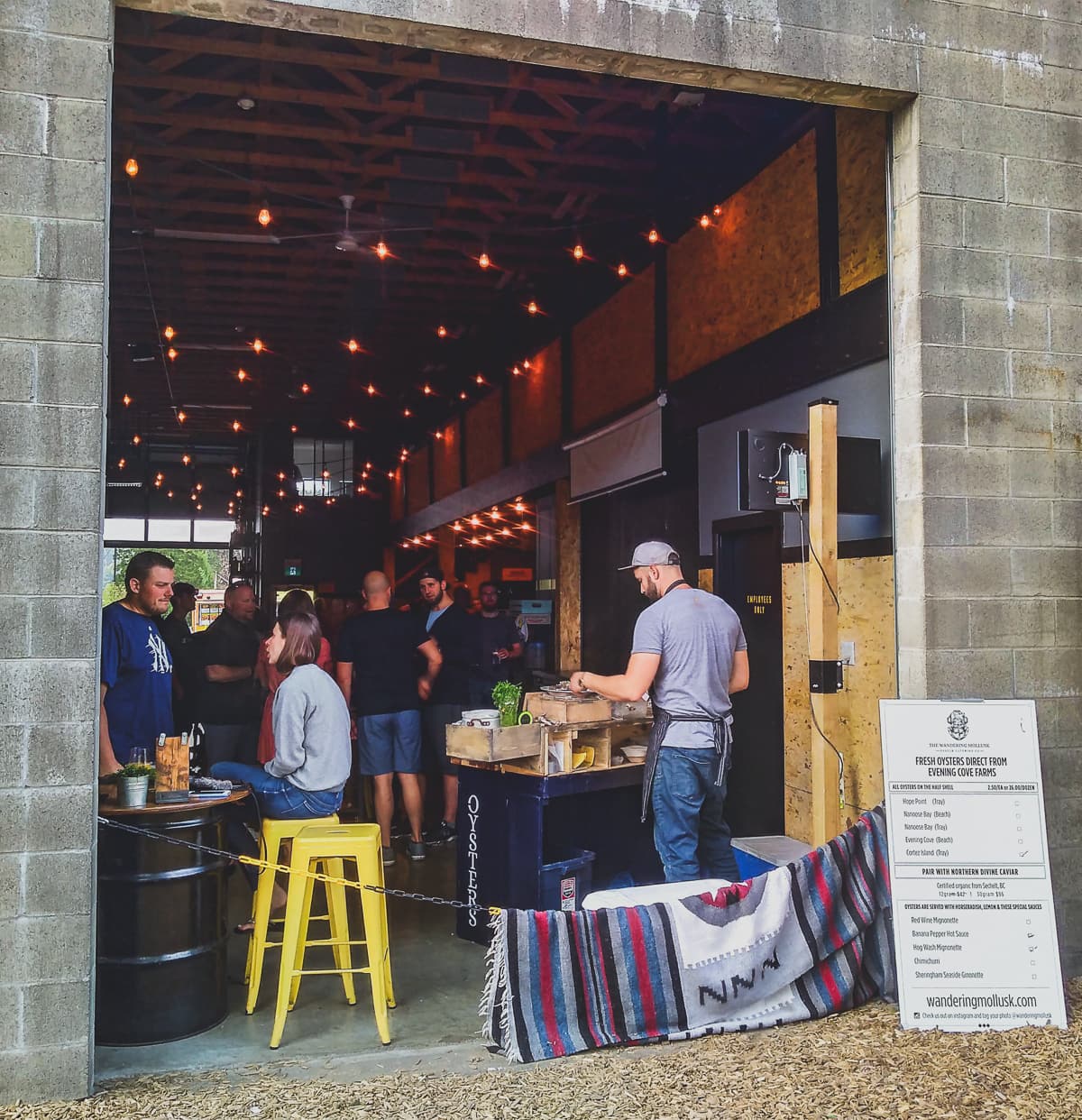 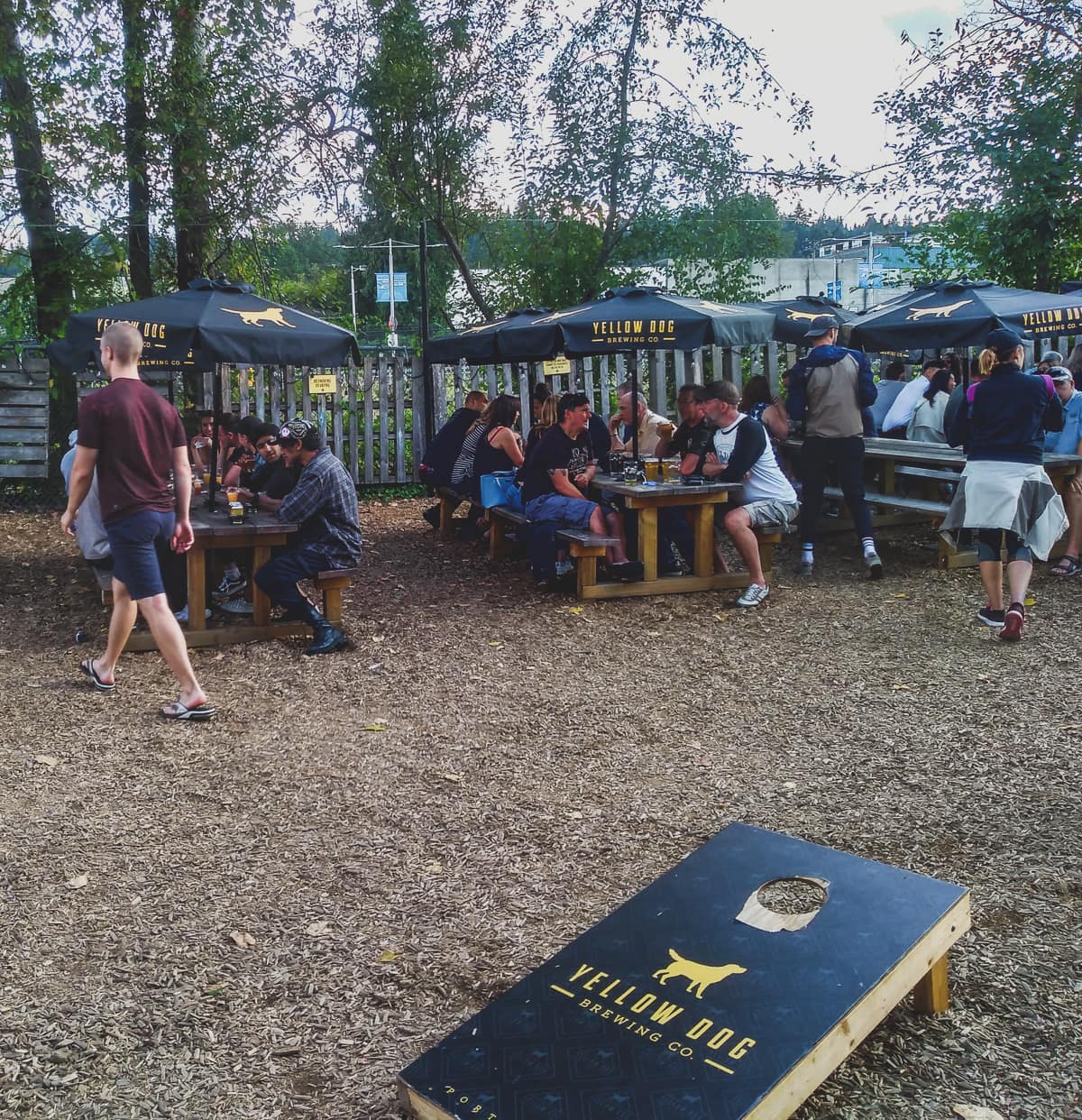 Yellow Dog Brewing is arguably the most famous brewery along Brewers Row in Port Moody, perhaps because it was the first or because its Shake A Paw Smoked Porter was named Beer of the Year at the BC Beer Awards in 2014. Either way, this brewery is super popular and not just because all the names of their beers are dog-themed (though I’m sure that helps!).

Yellow Dog has a lot of indoor and outdoor seating and sells some snacks to go alongside your beer too. When we visited there were oysters available which seemed to be going down very well. The outdoor area has lots of picnic tables and you can play corn hole too.

Another of the top Vancouver breweries is Twin Sailes. Twin Sails was our last stop along this ‘brewer street’ and it’s right next door to Yellow Dog. This brewery gets its name from its founders who are twin brothers, as well as the sailboats out on Burrard Inlet which is in front of the brewery.

This brewery used to focus on German beers but nowadays you’ll find a more varied beer list. This includes stouts and IPAs. These new additions to their beer list mean it’s now seen as one of the most innovative creators of IPAs, Stouts and Pale Ales and home to some of the best beer in Vancouver.

Where to eat along the Port Moody Ale Trail 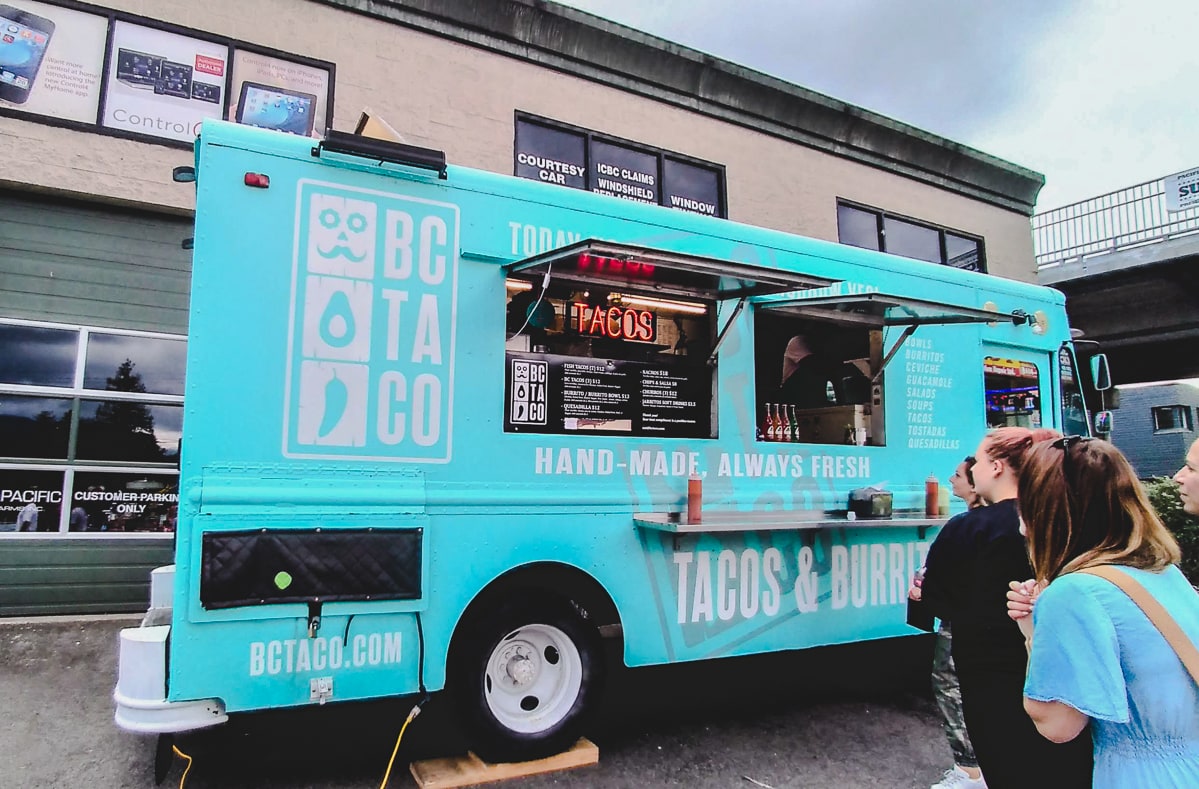 The great thing about the Ale Trail is that when the hunger strikes you don’t have to travel far for something to eat. On the weekend we visited, most of the breweries had food trucks outside ranging from Meat & Bread to mac and cheese and tacos and burritos. The food trucks aren’t the same every week, but you can be sure they’re tasty.

If you want a sit-down meal of something more substantial then check out these Port Moody restaurants.

Often considered one of the best restaurants in Port Moody, Taps and Tacos is just a few minute’s walk away from the Port Moody Craft Breweries. They serve some of the local beers alongside delicious tacos which include both the more traditional Mexican flavours as well as plates such as tangier chicken and Korean pork.

Romer’s Burger Bar has been voted Vancouver’s best burger bar for 5 years and features Port Moody ales on tap. The beef in their burgers is organic and come with so many tasty toppings! If you’re doing the ale trail as part of a party then give them a call and ask about their Growler Room.

If you’re looking for something sweer then be sure to check out Gabi & Jules’ bakery (though they also do savoury pies too!). The pies here are packed full of flavour and go perfect with a cup of coffee if it’s still a little too early for a beer or you need a pick me up. You can also get whole pies to take home too. 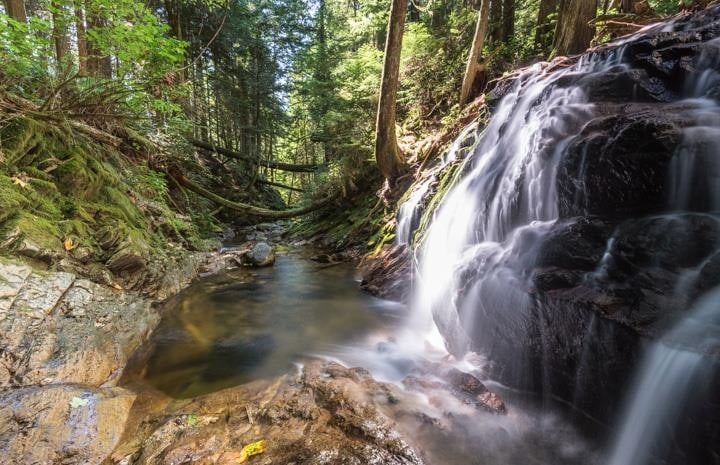 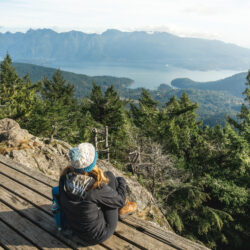 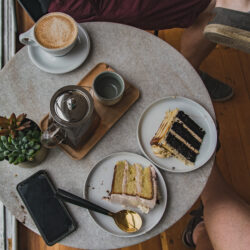 previous post
Day trip from Vancouver: What to do in Bellingham
next post
Heliotrope Ridge Trail hike 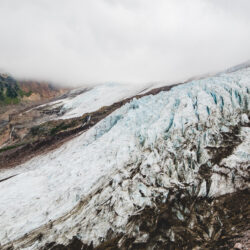 Soaking up the last few days of the season ⁠⁠

Just over a week left of the season and feeling re