Travelling independently in China was hard. Perhaps the hardest travelling I’ve done in a long, long time. But that’s not to say it wasn’t worth it.

We’d done a bit of research before we went and had heard from others that certain things would be difficult. We knew there’d be a bit of a language barrier, that there’d be funky toilets and that we should absolutely shouldn’t travel on a Chinese national holiday unless we wanted to be in a queue of people all the time.

So, we picked up a book on learning Chinese, were fine with the toilets (how bad could they be right?) and made sure our super cheap flights (just £316 return!) weren’t over a Chinese holiday. Despite this, there are still a few things I wish we’d known more about before travelling over to China that would’ve made travelling there a little bit easier.

Prepare for your China trip with these handy books 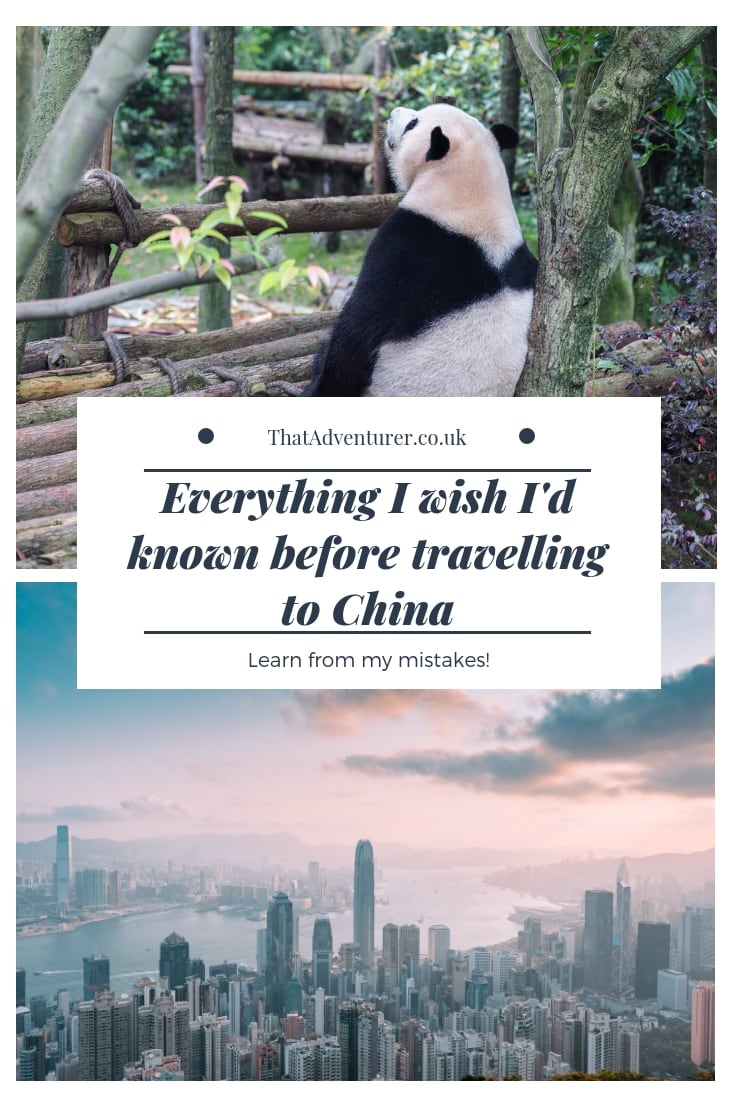 Things I wish I’d known better before travelling to China 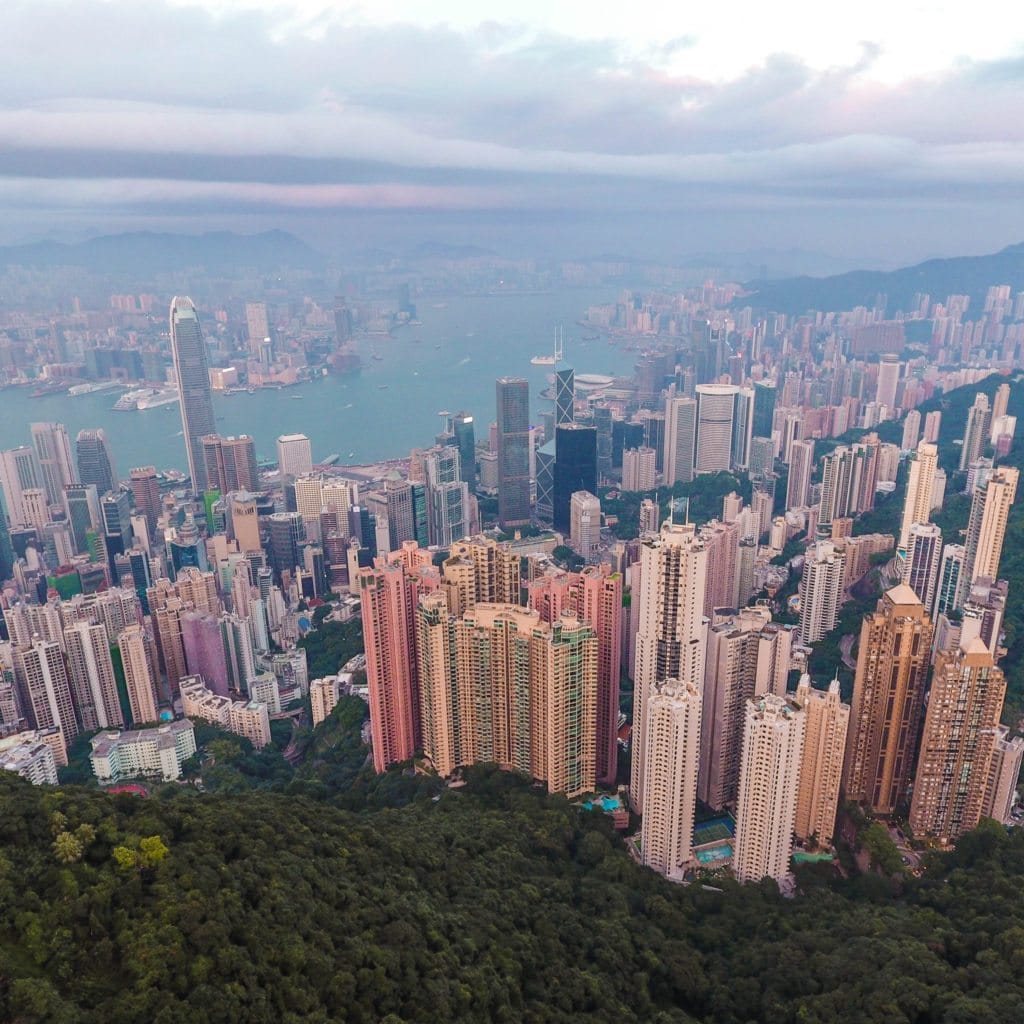 The language barrier is real

When we booked it I assumed, as us Brits quite often do, that they’d speak English or at least enough for us to muddle by. We bought a book, Chineasy, and tried to learn a few words but got on the plane. However we only really knew “hello” and “thank you” by the time we landed. We thought we’d be okay though…

The Chinese, in general, have about as much understanding of English as we do of Mandarin. This is made harder given that you can’t guess what a word means as letters are replaced by symbols. Even if you have Google translate (if you’ve got a VPN and can access Google), it just doesn’t work for Mandarin.

Be prepared for this barrier and work on your acting and you’ll get by. If you are really stuck then find someone between the ages of 15-30 and they’ll probably know enough English to help you out. Otherwise put together some useful phrases with some English speaking hostel staff such as “I want to get the train/bus to…” and “where’s the toilet?”

Getting the visa is a pain in the bum

Never has getting a visa been as difficult as the Chinese one. The website is very old and not at all clear, the information you need is spread all over the place and you’re bound to miss something the first time you send off your application.

Our first application was sent back to us as we hadn’t provided a “full itinerary”. I hadn’t realised we had to actually book a hotel for every night of our stay and then provide that booking confirmation in our application. I’d thought that putting the regions we’d be in, and roughly when, would be enough. It wasn’t.

We hadn’t really decided where we were going and this forced us to sit down and spend our weekend decided and booking hotels. Fortunately, booking.com has loads of hotels that offer free cancellation. Although we tried to plan and book our hotels as accurately as possible, our plans did change and I was so grateful we could cancel them for free.

Our second attempt was also refused the first time around as my name wasn’t on the booking.com confirmation email. Fortunately, I was able to fix this and email them the confirmation but not after some stress of them not receiving the emails etc, etc.

Oh and not only is the process a little bit of a nightmare, but it’s also bloomin’ expensive too! Postage alone costs £7.99 by guaranteed delivery (which you’ll want as you have to send your passport off) and the visa is at least £150 for UK citizens.

Getting our Canadian working holiday visa was so SO much easier! 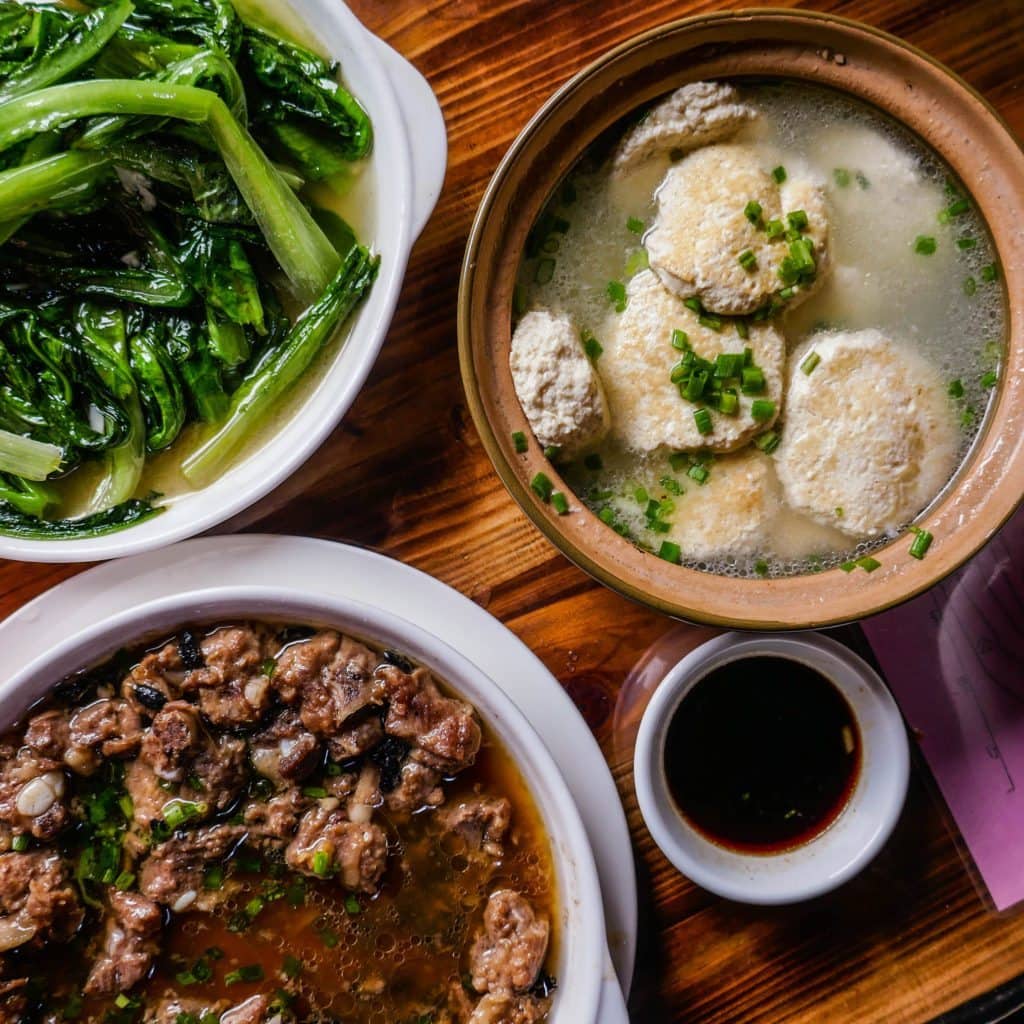 Unlike in the UK, China is very reliant on cash. Don’t rely on being able to pay with a tap of your card, phone or watch. I can’t even remember when I last took out cash!

Unless you’ve got a Union Pay credit card, you can only use a card in fancy hotels and restaurants (AKA the ones we can’t afford…). You can forget Mastercard and Visa they’re simply not accepted. Not even when buying tickets for the high-speed trains.

There are also limited banks you can use with a foreign credit or debit card. The Agricultural Bank of China is probably one of your safest bets but there are a few others.

Don’t feel you HAVE to eat the local food

When I travel I tend to insist on eating local food and frown upon getting a MacDonalds or eating in a restaurant we have back home. I simply didn’t care about this is China.

By week two I’d had enough of noodles and not knowing what I was eating. And, whilst I wasn’t eating in chains all the time, I was certainly a lot more open to eating at Pizza Hut.

This was especially true after one awful meal where the closest translation I could find to what we were eating was “pig’s anus”.

You can’t rely on Google

I knew China had a massive firewall due to censorship which would block all social media and Google. What I hadn’t realised is just how much I rely on Google when travelling.

When I want recommendations on things to do and where to eat I Google for them, when I need directions I use Google maps, when I need to be understood I’m on Google translate and on and on.

Fortunately, we were still able to access Google on Thom’s phone. This was thank to a host in our accommodation in Shenzhen who gave us access to his VPN.

If you’re more organised, you could set one up at home before you leave or make sure you’ve everything you need on paper or stored on your phone. 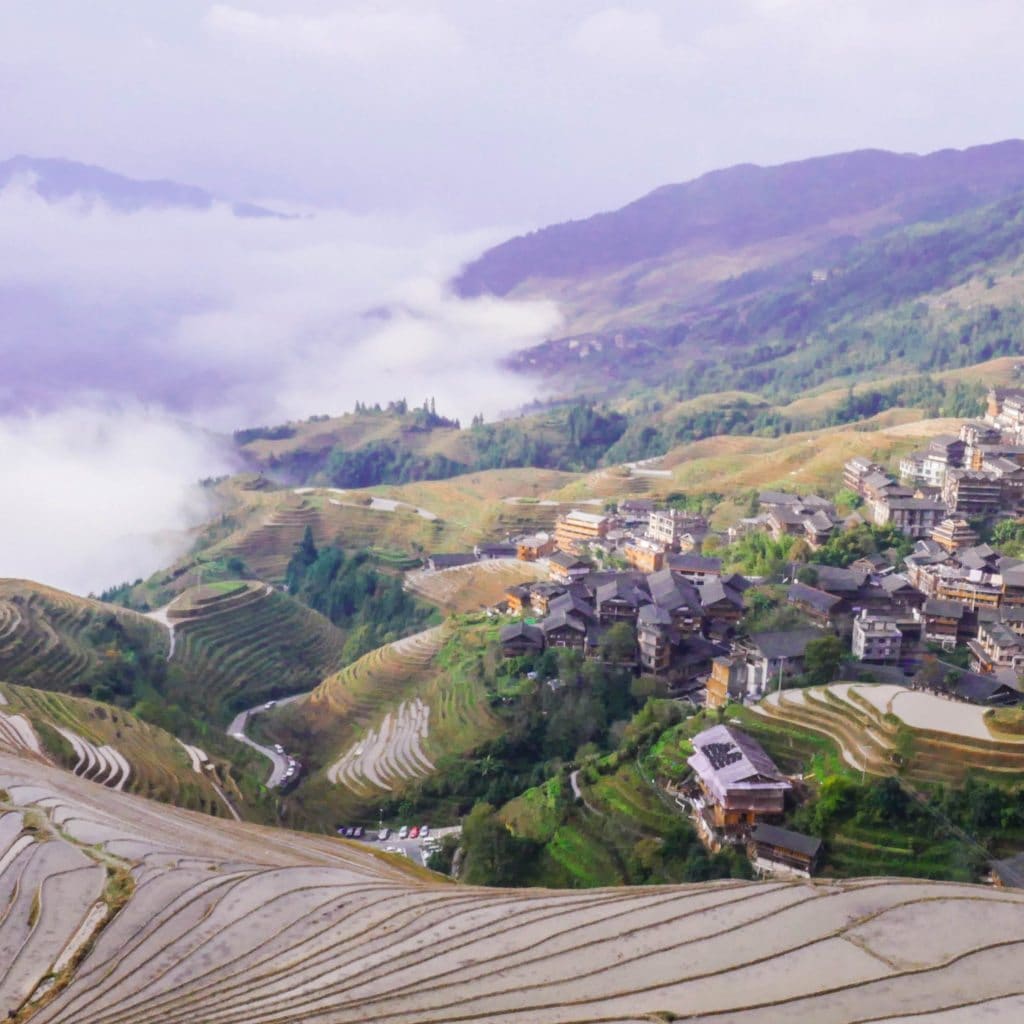 You can get a Chinese sim card fairly easily in China. We even found a great deal that promised several GB of data for about £1 a day. What they didn’t tell us is that if we left that region of China (which we did the next day) then that would count as roaming and that data plan wouldn’t work.

If you’re travelling through China slowly then it may be worth getting a sim card for each region. But, if like us, you’re only there for a few weeks, then it’s probably not worth buying a sim card everywhere.

Chinese hotels that have been deemed ‘fit’ for Westerners (AKA the more expensive ones) will usually have a ‘western-style’ toilet. You have to book your hotels online before you can get your visa. This means you’ll be booking more expensive ones that can afford to run a hotel online.

Therefore the chances are that they’ll have the type of toilet you’re looking for. Still, it’s worth checking as whilst squat toilets are fine when you’re out and about, it’s nice to have a western toilet in your hotel room.

The pollution wasn’t as bad as I thought

Everyone knows that China suffers from some pretty bad pollution. You see videos of the smog clouds in Beijing and Shanghai and because of this, I was expecting pollution everywhere to be awful.

Maybe it because we travelled in November when the city heat isn’t as stifling or because we weren’t in Shanghai and Beijing, but the pollution really wasn’t something I worried about.

Heck, London is WAY worse than anywhere we went to in China.

You don’t need to see the ‘must sees’ 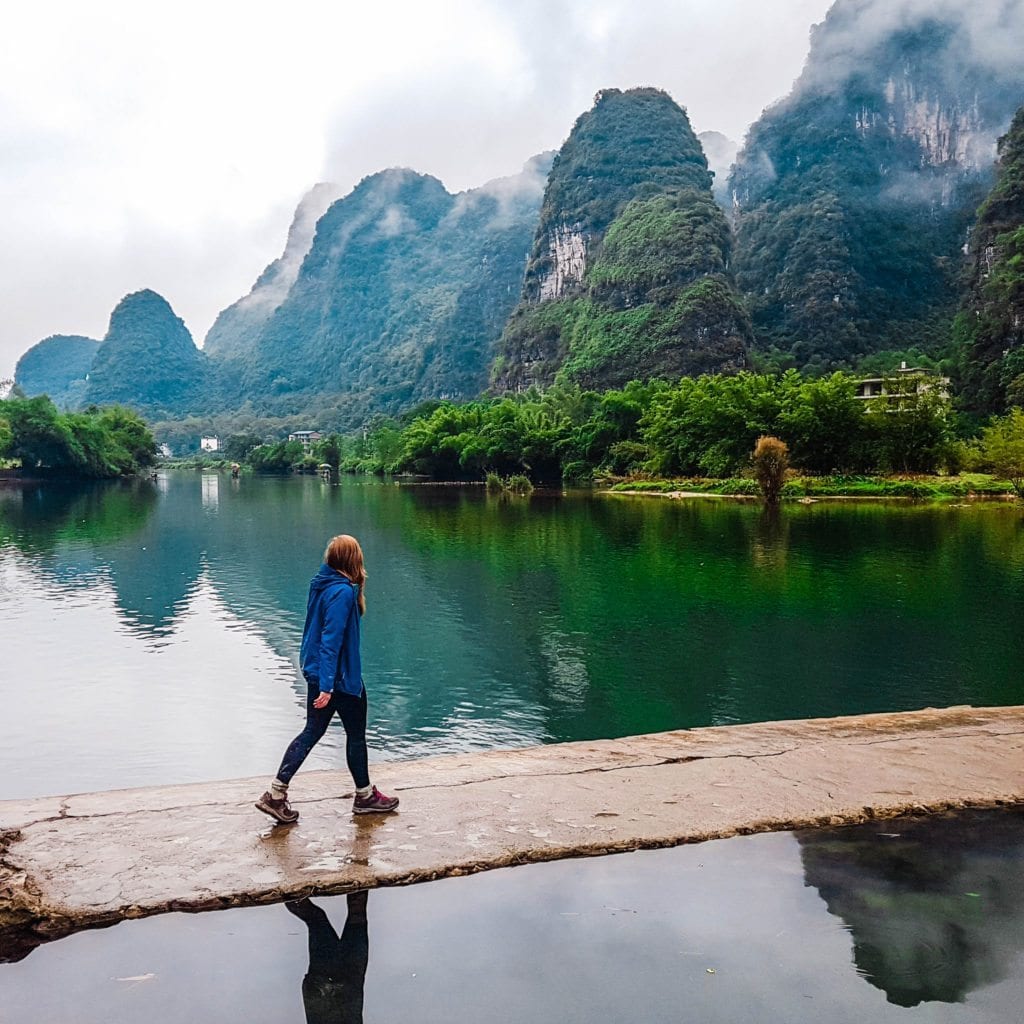 China is full of ‘bucket list’ items from The Great Wall of China to Tiananmen Square and the Terracotta Warriors. We didn’t tick any of these off. Instead, we flew in and out of Hong Kong and stayed south visiting lesser known towns and cities.

And you know what? We had a great time! We also get to feel a little bit ‘cooler’ for having seen places that most people miss out on.

I’d still like to see those ‘bucket list’ places in China but I wouldn’t have changed our itinerary at all!

Great post! Going to China for the first time can definitely bring up some nerves. It was definitely a struggle the first couple of times I went! The language barrier can be extremely difficult to get around, which can be frustrating if you're don't have a translation app on your phone that works without data. And the not knowing what you're eating was also very stressful- especially as a vegetarian. But no matter the challenges, visiting China is always worth it. There people are so kind and willing to help even if communication is a problem. And the sights are absolutely unbeatable. I can't wait to keep going back over and over again to explore more of the beautiful country.

This post was a big help, thank you! My husband and I just booked a spontaneous trip to Bejing and you wrote about a few things I didn’t even think about! I’m going to start learning some key Mandarin phrases and make sure we have cash!

Hi Konner, Glad to hear it was useful! Hope you both have a fantastic time in Bejing!

Did you go to Yangshuo? Looks like it from the pictures! I've been living in Guangzhou for over a year and a half and despite some of the challenges you mention, have fallen in love with this country. Thanks for your insightful and interesting post.

Yes I did! It's so pretty round there! I still loved my trip despite some of the challenges but that's what made it interesting!

This was so helpful! We are heading to Shenzhen on Tuesday and I could not feel more unprepared. Could you tell me how big the region's are before you start roaming charges? I assumed it would be like Canada where I could go anywhere and my phone costs the same ?

I'm not 100% sure what the regions are but you have to pay extra when you change from one to the other. A different region is like a different country in Europe - much like in Canada, I can only use my phone in BC and would have to pay more in Ontario for example!

[…] Things I wish I’d known before travelling to China China […]