Did you know Australia had mountains? Everyone knows about The Outback and the beautiful coast, but mountains? Sure, they’re not huge like in the Canadian Rockies, but they’re beautiful nonetheless. The Blue Mountains in Australia are perfect for a Sydney day trip or weekend trip from Sydney. If you’re planning on travelling to Australia make sure you add the Blue Mountains to your Australia itinerary. There’s plenty to do in the Blue Mountains, particularly if you like getting outdoors and are up for some adventure. Here are my top picks from the two days we spent roaming around on our visit to the Blue Mountains. 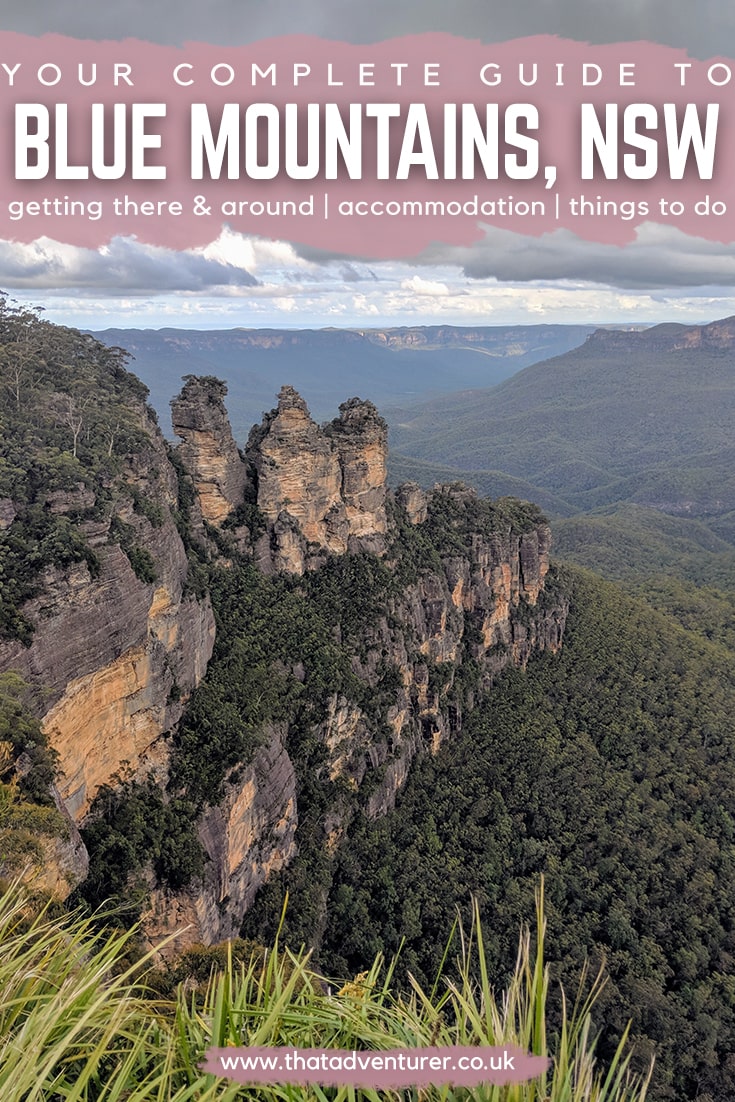 The Blue Mountains are known for their dramatic scenery of steep cliffs, waterfalls, eucalyptus forests and quaint villages full of galleries and gardens. The biggest town in the area, Katoomba, borders Blue Mountains National Park and the bushwalking trails. Whilst you shouldn’t head there expecting the mountain peaks of the Alps or the Dolomites, the Blue Mountains are still impressive. These mountains are far greener, leafy, full of birds and kangaroos and are more reminiscent of America’s Grand Canyon than a European mountain range.

There are six areas that make up the Blue Mountains National Park. There’s the Katoomba area which is the most visited, particularly by daytrippers from Sydney; the Blackheath area which is perfect for Blue Mountains adventures like biking and hiking; the Glenbrook area in the east with natural swimming holes and Aboriginal art (has an entry fee of $8 per vehicle, per day); and the Lower Grose Valley, Mount Wilson and Southern Blue Mountains areas which are more remote and give you a slice of Australian wilderness.

Where are the Blue Mountains?

The Blue Mountains are west of Sydney in Australia’s New South Wales state. Due to their proximity to the city, you might hear them referred to as being the ‘Blue Mountains of Sydney’, but they’re still a few hours away.

Why are the Blue Mountains blue?

The Blue Mountains of New South Wales get there name as they look blue when viewed from Sydney. The forest is mostly eucalyptus and in the summer sun the leaves of the trees give off a mist of eucalyptus oil. When this mist is refracted in the light the haze around them looks blue from a distance: The Blue Mountains!

When is the best time to visit Blue Mountains, New South Wales?

The best time to visit the Blue Mountains is from Spring to Autumn. Remember that since it’s in the southern hemisphere, the months are different from our spring – autumn!

Visit the Blue Mountains from December to February to experience summer where the trees come alive, clouds blanket the mountains in a mist when it rains and there are plenty of waterfalls. It’s a bit warmer but usually cooler than in the cities.

For those looking to hike the Blue Mountains visit in autumn (March to May) as the temperatures have cooled down and there’s less rain too.

Spring is also a great time to visit (September – November) as the flowers come back to life.

If you’re visiting in Australia’s winter (June – August) the weather is still okay. It’s cooler than you might expect but is generally still pleasant. However, it’s peak season for tourists so expect things to be busier.

How to get to the Blue Mountains from Sydney

Driving to the Blue Mountains

The most direct route is to take the M4 and then the A32 westbound. However, check directions to the Blue Mountains before you go, as traffic can make other routes easier.

If you need to rent a car in Australia, I highly recommend checking out RentalCars.com. They make it super easy to compare deals between companies so you know you’re getting the right deal for you. It’s who I use whenever I need to hire a car abroad!

Train from Sydney to Katoomba

It’s also possible to take public transport to the Blue Mountains from Sydney. It takes slightly longer but the plus is there’s no time wasted in traffic!

Whilst you can get the bus to the train station and then on to the Blue Mountains, there is no bus to Blue Mountains from Sydney that’s direct.

Where to stay in the Blue Mountains

Here are some of the best places to stay in the Blue Mountains on a budget.

Blue Mountains Backpacker Hostel: This hostel is super close to the train station, has dorms, private rooms and family rooms and plenty of space to hang out in making it a great choice for solo travellers looking for accommodation in Blue Mountains National Park.

Grand View Hotel: Located in Wentworth Falls, this hotel has great reviews and an even better price. Some rooms have shared bathrooms, but private bathrooms are available.

Echo Point Motor Inn: This inn is just 200m away from Echo Point and the Three Sisters viewpoint. It’s an ideal location for exploring the Blue Mountains National Park in Australia.

What to do in Blue Mountains, Australia

Best tours in the Blue Mountains

Short on time and looking for the best Blue Mountains tours to show you the highlights? Here are a few highly recommended tours in the Blue Mountains which will take you to the top places to visit in Blue Mountains National Park. 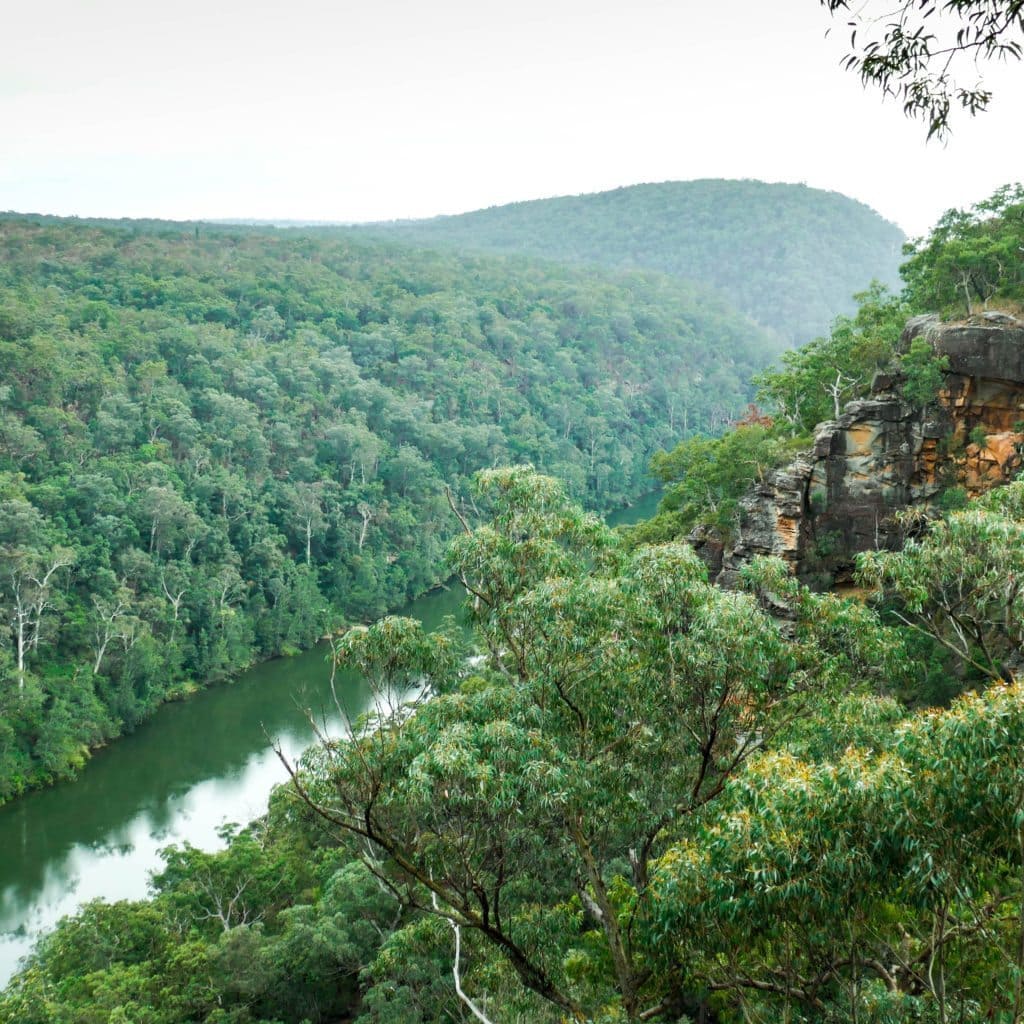 One of the best adventures in Blue Mountains, NSW is to go hiking. You simply can’t come to the Blue Mountains without doing a hike, even a small one!

We didn’t do any big hikes due to being a little short on time, but we did make sure to get out of our car regularly and walk up and around the sites. Walking around the trails is one of the best activities in the Blue Mountains and there’s no need for it to be too strenuous either.

The routes are all well mapped out and you could easily spend several days walking through the Blue Mountains and making the most of the free campsites dotted throughout the park.

We skipped this one as we were on a very tight budget what with a trip to Hong Kong & Southern China and our move to Canada on the horizon, but this would be a great addition to a Blue Mountains itinerary, especially if you’re wondering what to do in the Blue Mountains with kids.

Scenic World is an area of the Blue Mountains near Katoomba that has cable cars, walkways and a railway to give you the most incredible views of these mountains in Australia. If you want to dedicate a day just to explore the nature and landscape of the mountains (and you totally should) then Scenic World is a must. 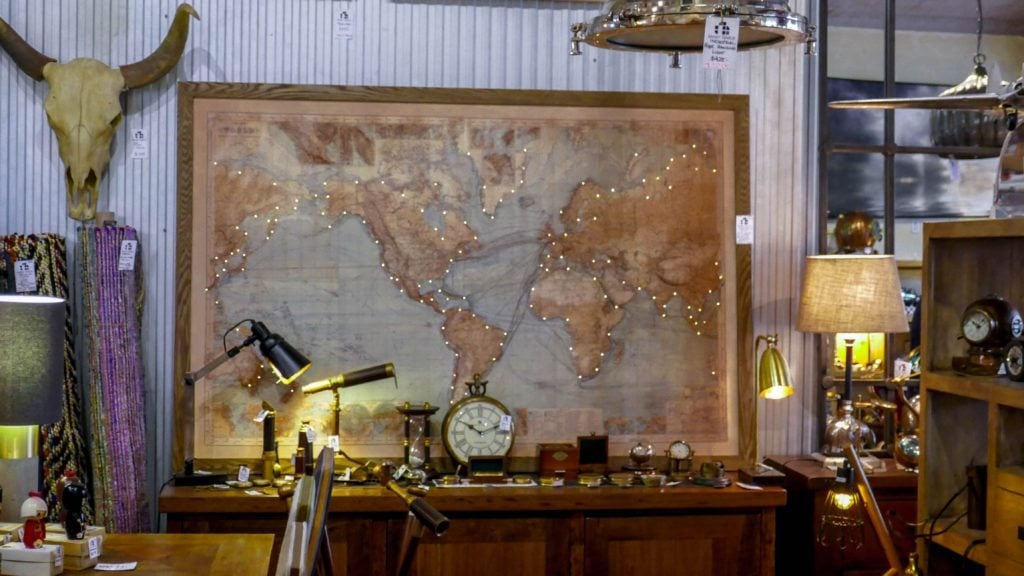 Another of the top Blue Mountains attractions is the quaint town of Leura. Leura is a popular stop-off for visitors to the Blue Mountains. It is one of the oldest towns in the area and has Edwardian storefronts and 19th-century cottages. Coming from England we’re a bit spoilt when it comes to pretty, old buildings, but there’s no denying Leura had some charm. 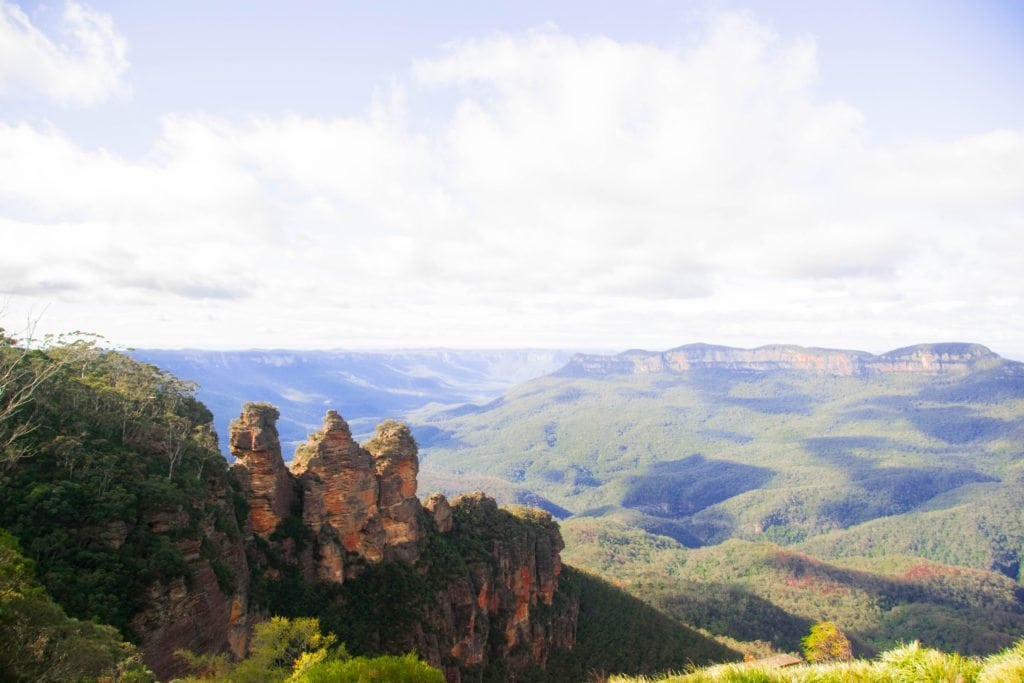 The Three Sisters is the most well-known of all the attractions in the Blue Mountains National Park. The rock formation of the Three Sister is just outside one of the larger town of Katoomba.

The best time to visit The Three Sisters is definitely early or late. There are a lot of tour buses that stop here so try and beat them there so you’re not jostling elbows with each other. There’s also a great viewpoint that looks down onto the rocks, or you can take it one step further and get up close to them…

Walk to the Three Sisters 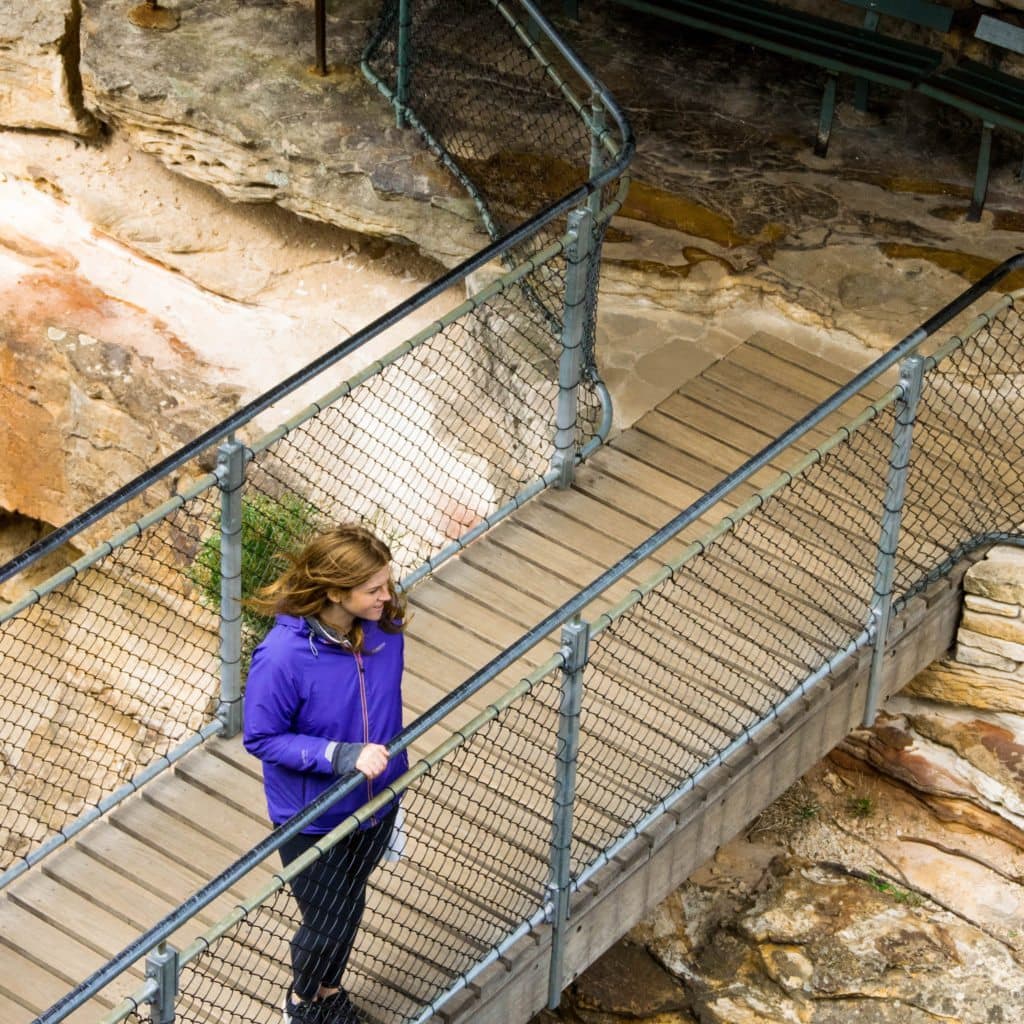 Getting to the bridge involves some steep, not very even stairs, so if you’re not a fan of heights maybe stick to the viewing platform, but otherwise it’s great to have a different perspective of these famous rocks.

Go camping in the Blue Mountains

There are plenty of places to go camping in the Blue Mountains and many of the camping spots are completely free!

As there is so little light pollution in the Blue Mountains, camping here means you’ll get to see an amazing night sky. We opened the doors in our campervan and watched the stars above; counting satellites and hoping for shooting stars.

The Blue Mountains National Park website has a list of all the camping sites in the park, both free and paid for. 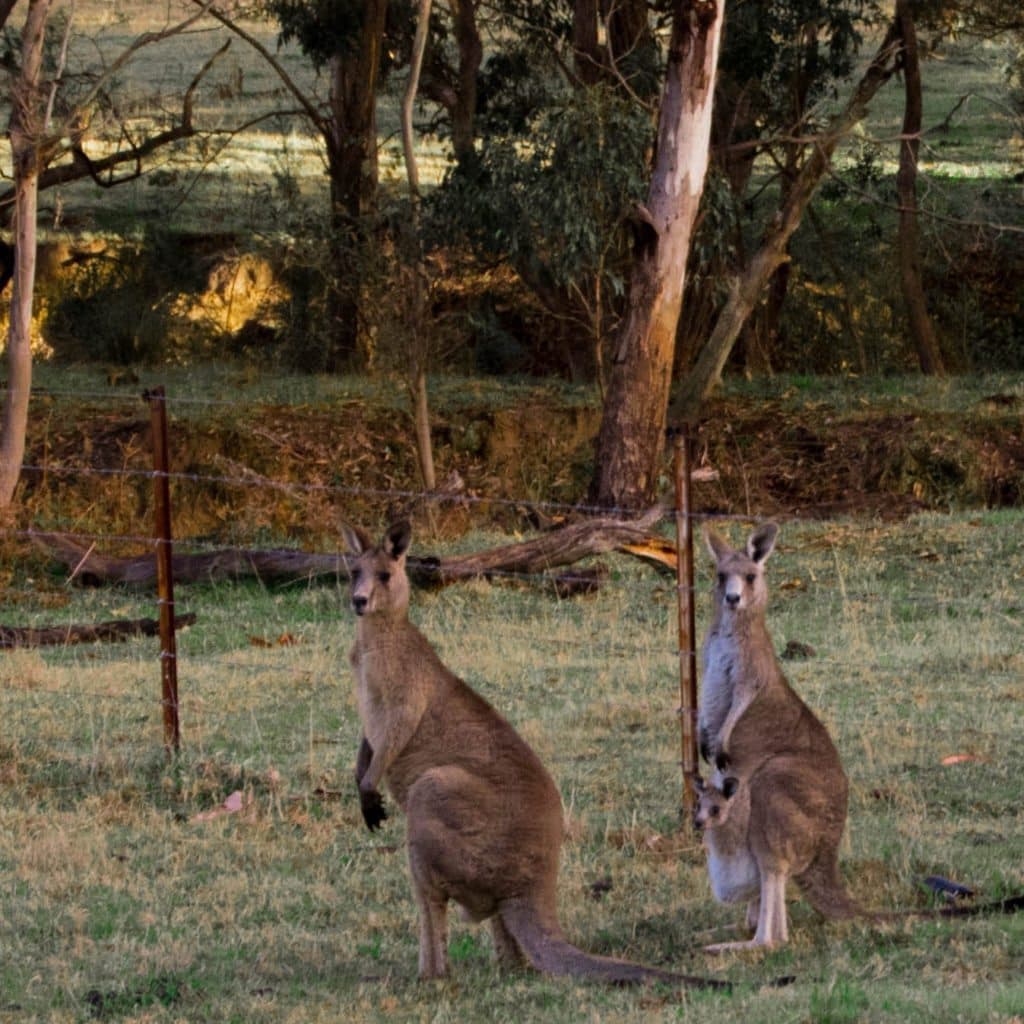 Look at the baby!

Whilst most people are looking at the landscape, for us one of our favourite Blue Mountains tourist attractions were the kangaroos! If you’re not from Australia you may think the same thing too.

In Australia, kangaroos roam free and the first time you see one you’re bound to get excited. We pulled over many a time to watch kangaroo families in the fields of the Megalong Valley. They’re Thom’s favourite animal now!

They’re not the only animals in the Blue Mountains. You may also see koalas and dingos or the tiger quoll which is an unusual type of marsupial native to Australia – I imagine they’re pretty hard to spot though!

Have tea at the Megalong Valley Tea Rooms

The Megalong Valley Tearooms have a strong reputation and have been open in the Megalong Valley for the last 60 or so years. It’s a great stopping off point when you’re driving the Megalong Valley. Enjoy a cream tea, scone, or apple pie while warming up next to the fire in winter, or a filling breakfast or lunch under the trees in summer. It’s definitely one of the best cafes in the Blue Mountains.

Eat a pie at Old Church Cafe in Leura

The Old Church Cafe towards the end of Leura Mall does a tasty meat pie. It was raining when we visited and a warming pie was just what we needed! Order at the front and then make your towards the back where there are some comfy seats, a fireplace and newspapers to browse while you take a break.

Relax and take in the views 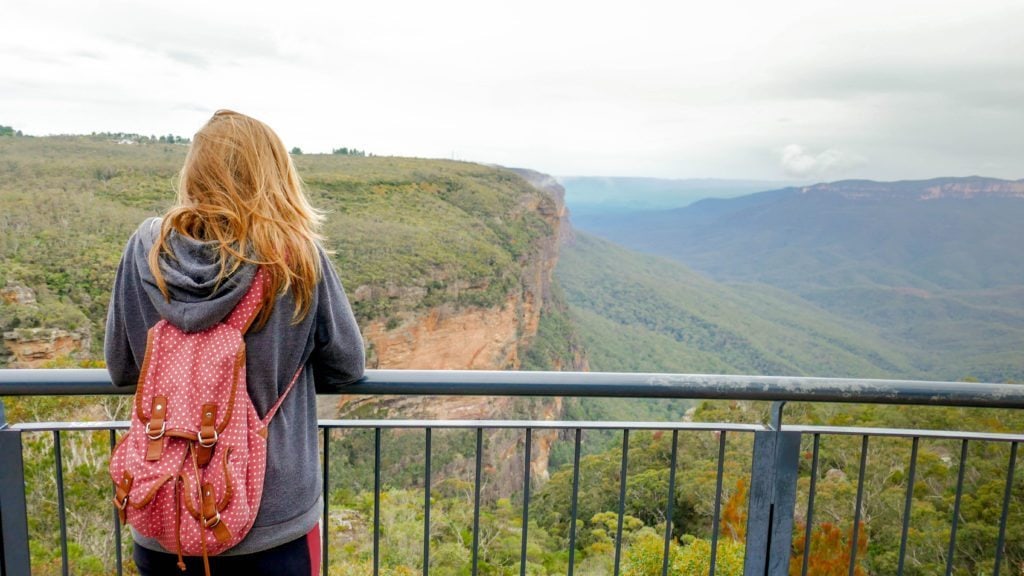 Take a break from walking, shopping and driving to pull over somewhere and just sit and look out at the Blue Mountains. Everywhere we went in the park we were treated to fantastic views with lots of greenery and tonnes of wildlife. It’s a pretty nice spot to have so close to the city!

Great post! The hop on hop off bus from Katoomba and Leura is great for getting around and the guides are so knowledgeable ☺

My year in travels - 2016 adventure recap | That Adventurer

[…] keep it cheap we hired a camper van and lived the Van Life for a week while visiting the Blue Mountains and Hunter Valley. I’d also been given £150 from Airbnb to spend which got us a few night’s […]

A One Week Itinerary for New South Wales | That Adventurer

[…] What to do in the Blue Mountains National Park […]

Hannah all your Aussie pics are beautiful. Gutted I never made it to the Blue Mountains when I was there, but I suppose its an excuse to go back. Would love to camp there. Look at the Roo's, I loved spotting wild roo's in Australia, so ... well ... Aussie, haha. x tink jayne lifestyle x allabouttink.co.uk