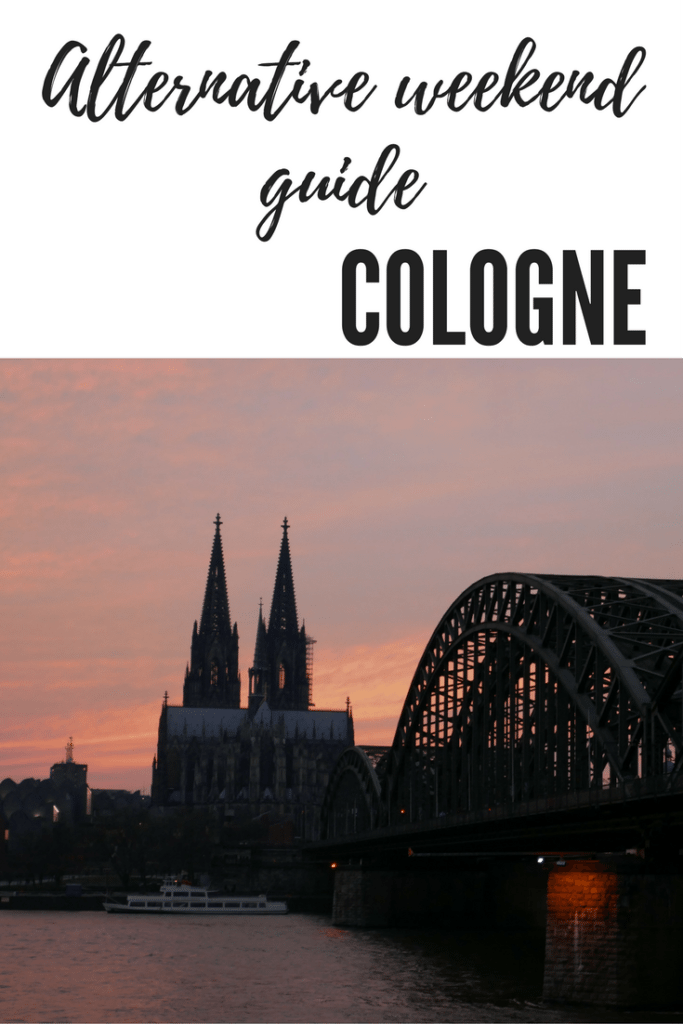 Cologne is just an hour’s flight away from London, pretty cheap to get there if you book early enough and the city has such a great laid back vibe to it that you’ll return home feeling chilled. It quickly became one of my favourites places in Germany to visit.

It’s one of those cities which you can walk through, from one side to the other, without really noticing. If you were to attempt that in London you’d definitely notice!

But you know me, I like to suggest things that are a little bit different, like this alternative weekend guide to Marrakech. So whilst Cologne, Germany’s cathedral is definitely worth a look (especially inside, it’s gorgeous!) I haven’t included it below as that’s something you’ll see recommended everywhere!

So just what are the best things to do in Cologne, Germany? 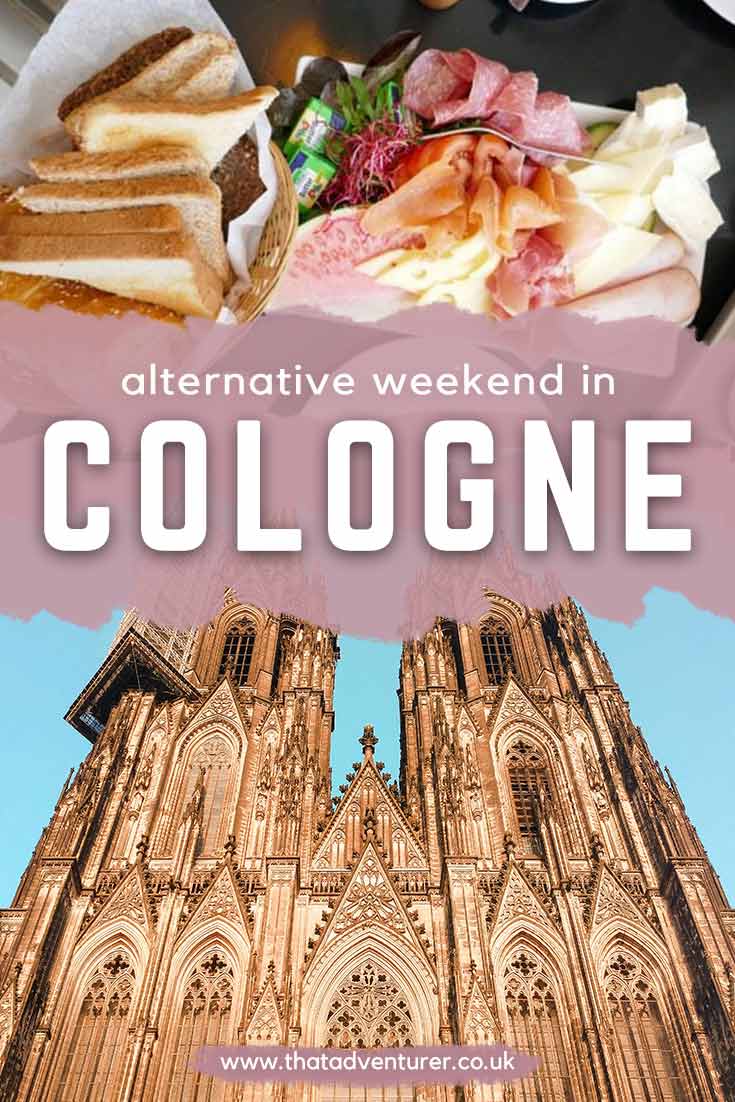 Cologne is in western Germany, Europe in the North Rhine-Westphalia region. It’s the 4th biggest city in terms of population after Berlin, Hamburg and Munich.

Take a look at this Cologne Germany map to get your bearings. Simply click it to get a closer look. How to get to Cologne from the UK

There are plenty of different ways to get to Cologne from the UK with the most popular being to fly. However, you can also take a bus or even catch trains to Cologne!

There are loads of flights between the UK and Cologne, Germany. They’re pretty cheap too, you can find some return flights for about £40 from London airports.

We like to use Skyscanner to find cheap flights, it’s never let us down yet!

If you’ve yet to choose your dates then take a look at Dollar Flight Club, once signed up you can set your home airport(s) and then they’ll let you know when they find amazing deals on flights. The savings they find every day AMAZE me.

Check out my post full of tips and tricks to find cheap flights!

Bus from London to Cologne

If you’re coming from the UK, then you can also take the bus which is super cheap! We’re talking about £30! Book tickets through Omio  for the best deals and an easy way to compare different ticket options.

Solo traveller or looking for something different to do? Check out these awesome tours in the city of Cologne!

Where to stay in Cologne

We stayed in an Airbnb where we only paid for a private room but the couple ended up spending the weekend outside of the city so we had the whole place to ourselves in the end. Alternatively, check out these best hotels in Cologne for your weekend city break.

Where to eat in Cologne

Looking for the best restaurants in Cologne? I have another post on what to eat in Cologne but here are a few tips on what to try!

Best Cologne things to do

If you’re wondering what to do in Cologne, Germany then look no further! Here are a few of the things we got up to during our weekend in Cologne with a couple of extra Cologne attractions thrown in. I’d highly recommend this city as one of the best places to see in Germany!

Cologne’s Claudius Therme is the perfect place to while away a Sunday afternoon.

It’s worth noting that on Sundays Cologne’s shops are shut all day so what do you do?

Brunch and spa. So when you visit Cologne why not do as the locals do?

Claudius Therme is situated along the Rhine and for 25 euros you can enjoy 4 hours of relaxation.

There’s a large indoor/outdoor pool, a few Jacuzzi, plenty of deckchairs to chill out on and, if you Fe like embracing your European side and leaving the English side behind, there are some (naked) saunas.

There’s also plenty of saunas and steam rooms outside which I can imagine are great In the summer when it’s warm enough to stroll from one to the other.

To visit the spa you need two towels (you can rent towels there) ideally. One for carrying with you in the spa and for sitting on in the sauna and one for drying with; a dressing gown should you wish to use the spa’s restaurant and to fit in more you’ll want some flip flops to walk around in. 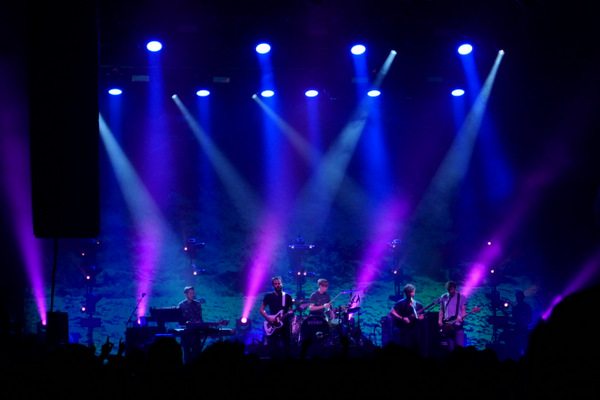 Whilst in Cologne we went to see the Foals on their current tour.

The gig was in the Palladium. It was a little out the way,kind of in an industrial estate, but that added to the “cool” vibe of seeing a gig abroad.

There’s plenty of live music at the Palladium and its a fun way to spend a night out other than just drinking beer in a pub!

The Innerer Grüngürtel park is a great place to take a Sunday stroll before or after Sunday brunch and one of the best places to visit in Cologne too.

It’s huge and when the sun’s shining there’s not much better than donning some sunnies, coffee in hand and doing a spot of people watching. 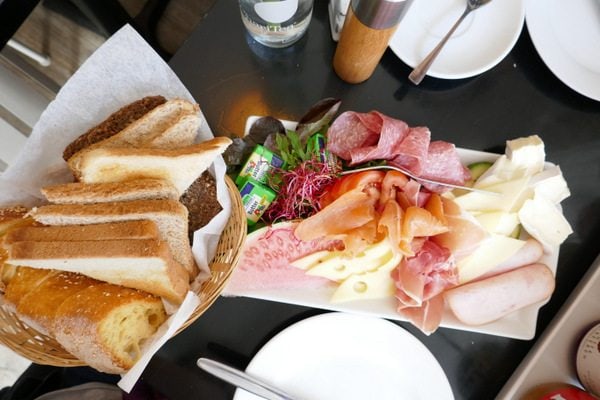 The Ehrenfeld area of Cologne has a bit of a hipster vibe and should be on your list of things to see in Cologne. It’s got several cafés with all white interiors, artistically stacked bread and pretty coloured tulips, cool young Germans strolling the streets and just seems like the place to be. If I was to ever live in Cologne I think I’d want it to be there.

Our Airbnb was in this area and I loved waking up here before strolling through the park to the city centre.

If you visit the area definitely pop into cafe cafe (so good they named it twice!) for breakfast but get there early as it’s small and gets packed early on! 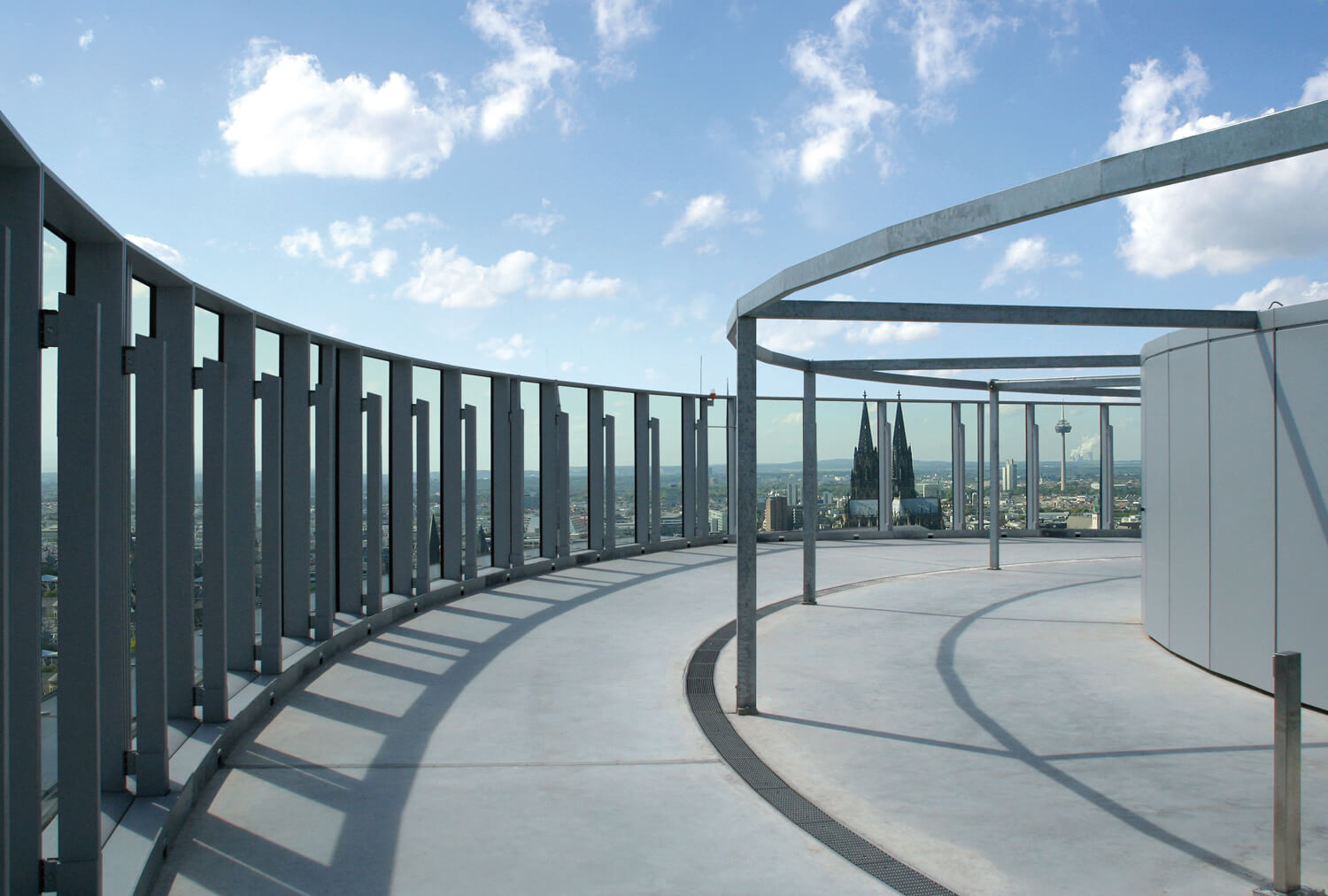 If you’re looking for another great view of Cologne but want to capture the Dom in your pictures, then you should climb the KölnTriangle.

Of course, you can go and climb the Cologne Cathedral too (it’s one of the most famous landmarks in Germany after all!) and should be on a list of what to see in Cologne (just it’s not exactly an alternative thing to do in Cologne!).

This tower on the opposite side of the Rhine than Cologne’s cathedral gives you stunning views over the whole city and is the perfect place to capture that photo.

Watch the sunset from Hohenzollernbrücke

Cologne is a bit famed for its gorgeous sunsets and we were treated to one on our last night there. Add catching a sunset to your Cologne sightseeing checklist.

The sky lit up to a beautiful pinky orange colour and put on a show for our walk across the Rhine to the train station.

Have you been to Cologne before?

48 hours in Madrid | That Adventurer

[…] know me, I love my city breaks and got my fill of them earlier this year in Cologne and Lille. But one place that tops the list of “great city break” ideas is Madrid. Madrid city […]

I went to Cologne for the Christmas markets and it was so much fun I'd definitely go back again!

Great Post! I'd love to visit here, I love all the pictures! happy Travelling! www.wanderfreeblog.wordpress.com x