Since moving to British Columbia I’ve developed a bit of an obsession with trestles. I don’t even think I knew what they were before I moved to Canada. But now? Now if I know there’s a trestle in the area I’m desperate to go visit. The Myra Canyon trestles and the Ladner Creek trestle are some of the best trestles in BC but they’re not the only ones. If you like trestles too (and the photo opportunities they provide) then make sure to check out this list of the best trestles in BC. 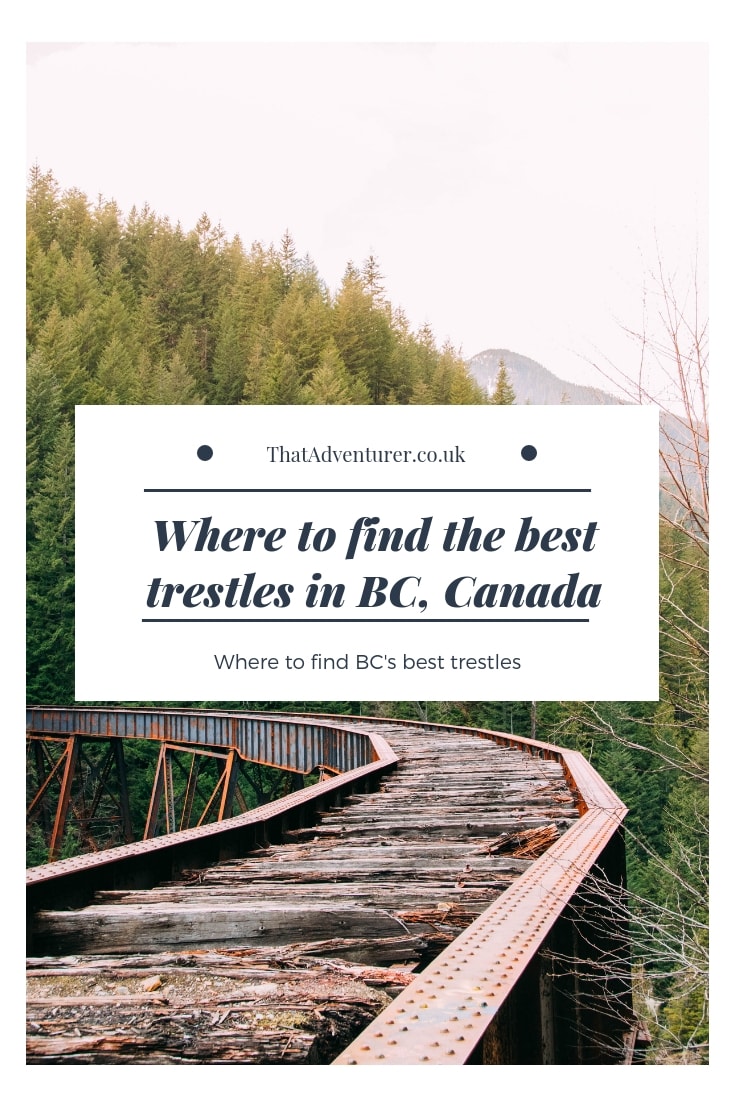 A word of warning: Most of these trestles in BC are in various states of disrepair (with exception of Kinsol, Myra Canyon, Selkirk and Holt Creek (if reopened)). If you do decide to walk on them take extreme care – I’d advise you not to. Also be aware that some are still active railways. 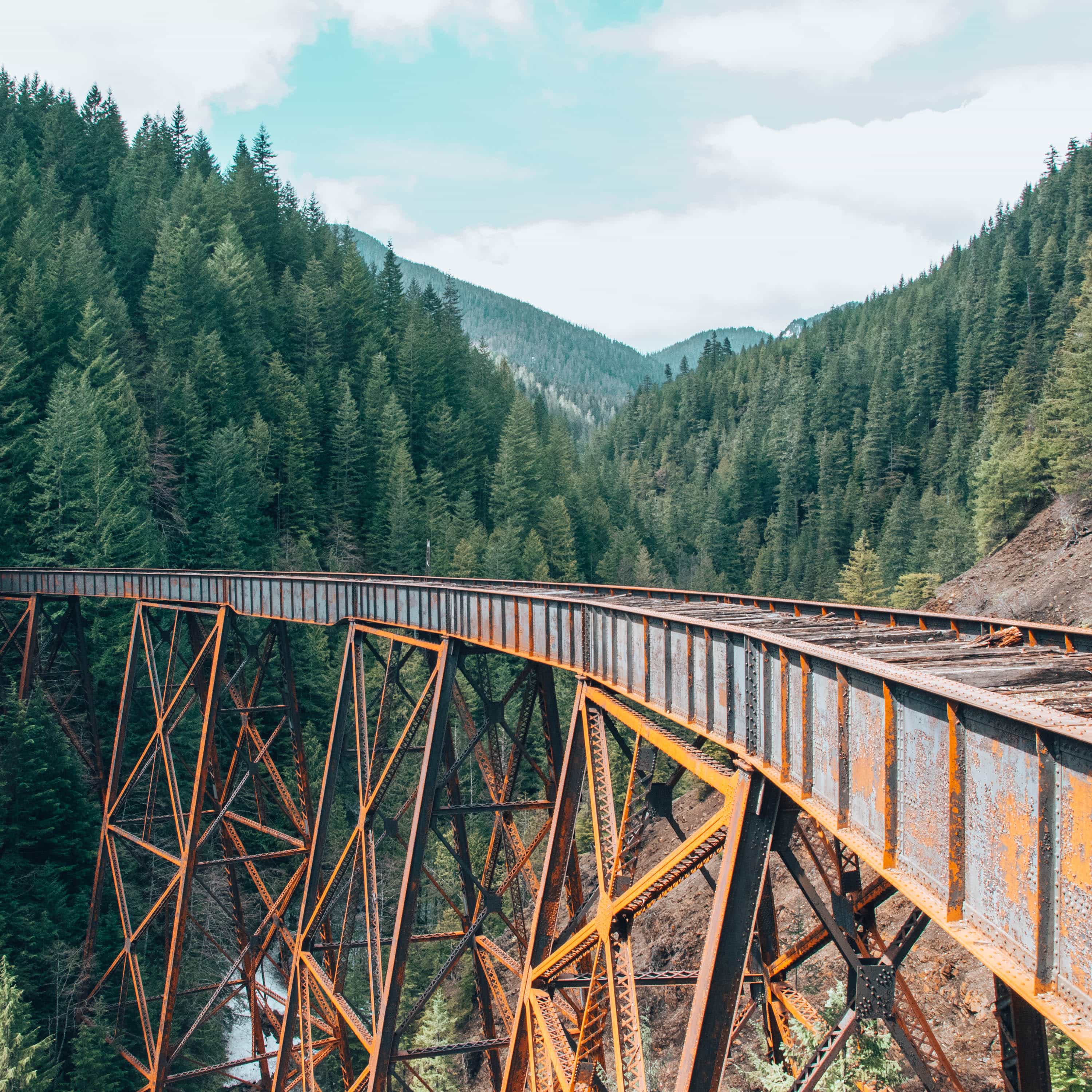 The Ladner Creek Trestle (old bridge) was part of the Kettle Valley Railway that ran across southern British Columbia. The railway opened in 1915 and was abandoned in part from 1961. The last trains ran on the part of the railway west of Penticton in 1989.

Nowadays much of the railway has been turned into a biking and hiking route (of which the Myra Canyon trestles below are part of). The Kettle Valley Railway (KVR) also intertwines with the Trans-Canada trail which is a 42,000km trail across Canada.

Whilst the trestle is largely still in tact, the wood has rotted which makes walking across the trestle an extremely bad idea. Do not attempt to.

Read more about how to find the Ladner Creek Trestle The Myra Canyon trestles in Kelowna make up part of the Kettle Valley Railway. In January 2003, this section was even designated a National Historic Site. The trestles were restored and reopened in 2008 for cycling and hiking after a disastrous forest fire a few years prior.

This section of the Kettle Valley Railway runs between Ruth station and Myra station for 12km one-way, 24km round trip. It’s a super flat trail too which makes cycling the Myra Canyon trestles super easy.

Read this guide to cycling the Myra Canyon Trestles

The McCulloch Trestle near Penticton in the Okanagan was completed in March 2002. It’s named after the Kettle Valley Railway’s chief engineer: Andrew McCulloch. It’s not an old one like the others on this list therefore, but it’s still worth visiting if you’re in Penticton.

The McCulloch Trestle is just a 40 minute walk from downtown Penticton and you’ll get a wonderful view of the Okanagan Valley and the vineyards from it. 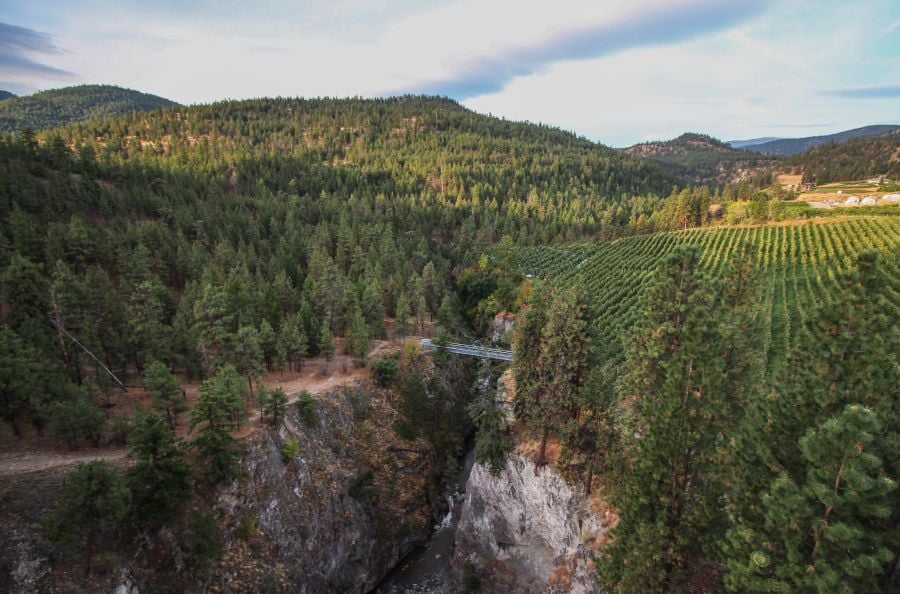 The Trout Creek Trestle is also in the Okanagan. It’s in Summerland and was built between 1910 and 1915. It’s the only part of the Kettle Valley Railway that’s still running to this day.

Walking it only takes about 10 minutes and it’s easy too. From Trout Creek Trestle you get great views of the Trout Creek Canyon and Okanagan Lake.

To get to the Goldstream Trestle you’ll need to hike. The trestle sits high above the Niagara Creek. You’ll walk by Niagara Creek and then climb steeply up above Niagara Falls (just a much smaller version!).

The Kinsol trestle on Vancouver Island BC is a well maintained trestle. It’s safe for cycling, hiking and horse riding.

It’s just one of 8 trestles that run along the Cowichan Valley trail route. In that way the Kinsol Trestle is similar to the Myra Canyon Trestles.

Of the 8 trestles that make up the Cowichan Valley Trail, the Kinsol Trestle is the tallest (and one of the tallest in the world!). It’s 44m high!

It’s easy to visit the trestle since it’s just 1.2km away from the parking lot along a paved, flat surface.

The Holt Creek Trestle on Vancouver Island is one of the other BC trestles that make up the Cowichan Valley trail. It also makes up some the The Great Trail that crosses Canada.

The trestle was build in 1939 and later converted for recreational use.

This trestle closed for repair in 2017 and was expected to open mid/late 2018.

A great day trip idea is cycling or hiking from the McGee Creek Trestle to the Kinsol Trestle. 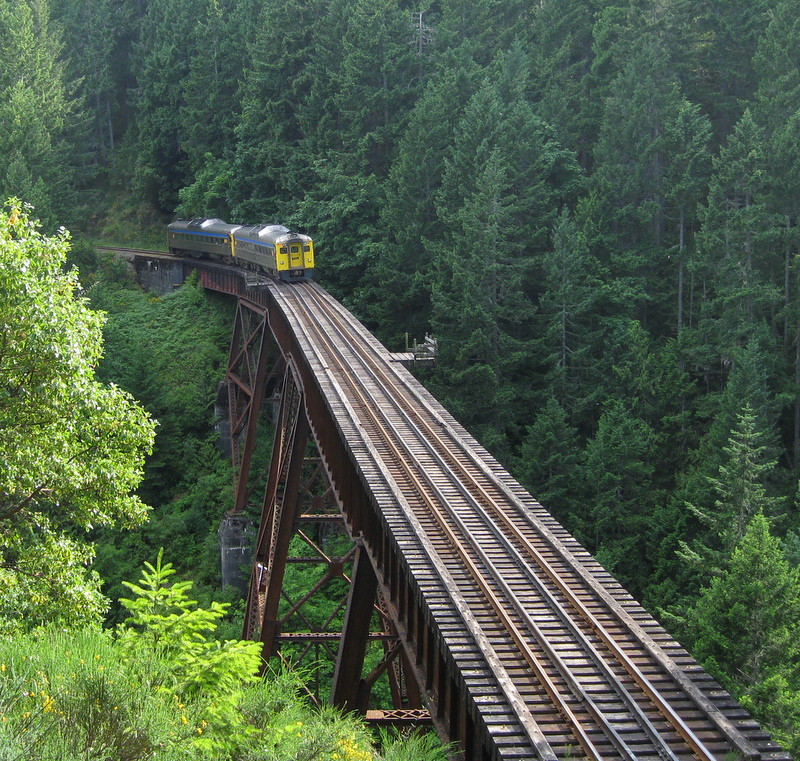 This trestle is a couple of kilometres north of the Goldstream Trestle so you can easily combine the two into a day trip.

Right in the heart of Victoria on Vancouver Island is the Selkirk Trestle. It crosses the Selkirk waterway and is one of many trestles on the Galloping Goose Trail.

There are two more trestles on Vancouver Island near Port Alberni. This would make a great stop off if you’re on your way to Tofino and Ucluelet.

The Loon Lake Trail which can be accessed from the Loon Lake Main off the Alberni Highway will walk you around Loon Lake and come up at the old railway line. 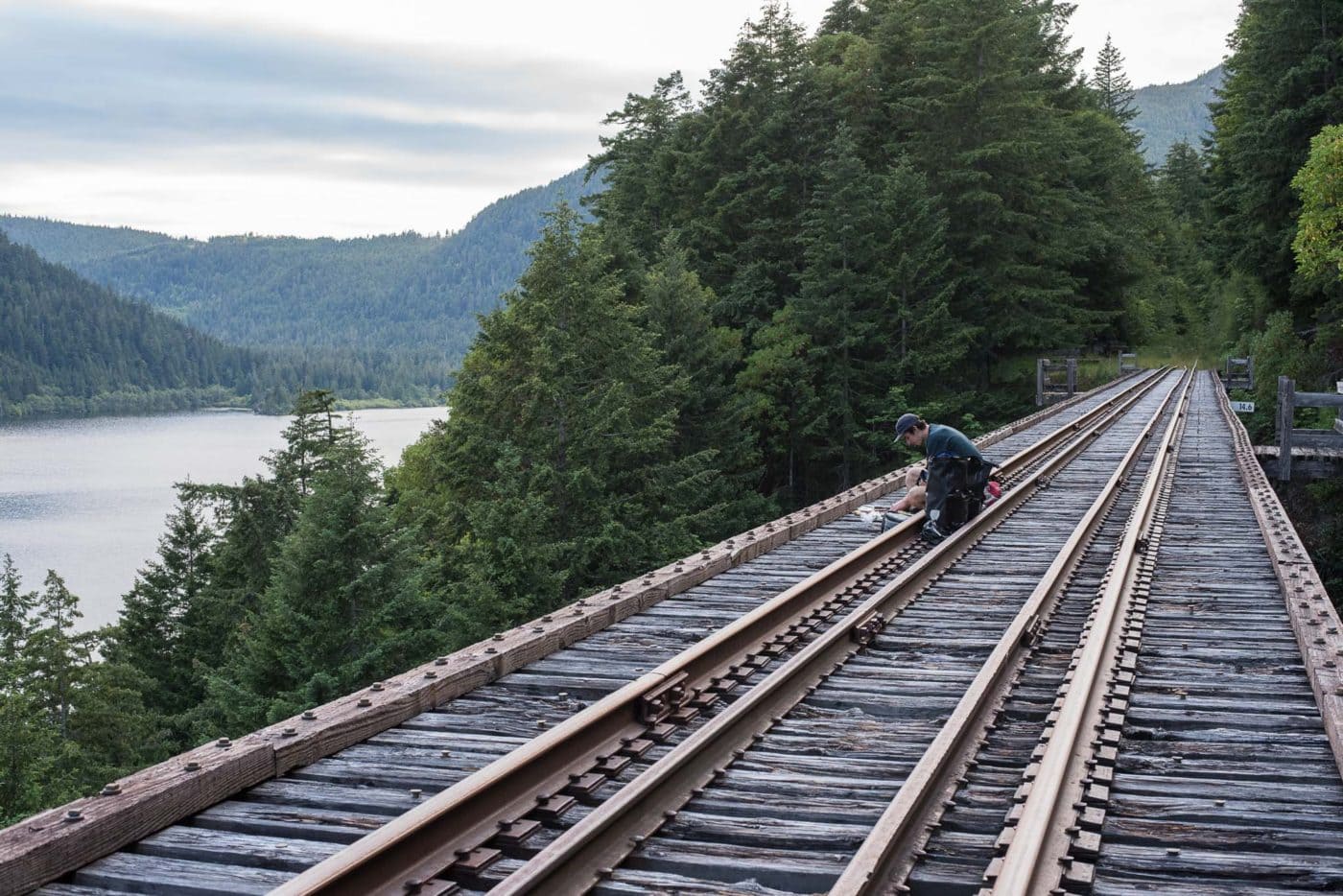 The tracks on this trestle haven’t been in use since 2001.