When I moved to BC my obsession with trestles began. So far I’ve ticked off the Ladner Creek trestle and now the Myra Canyon trestles. I’d tried to visit these last November but the snow had already fallen and the road was closed so we had to postpone it. This summer I returned with some friends and we cycled the Myra Canyon bike trail before indulging at some of Kelowna’s best wineries. If you’re also a little in love with trestles, wine or just great views, then make sure you check out this Myra Canyon trail!

The history of the Kettle Valley Railway (KVR) 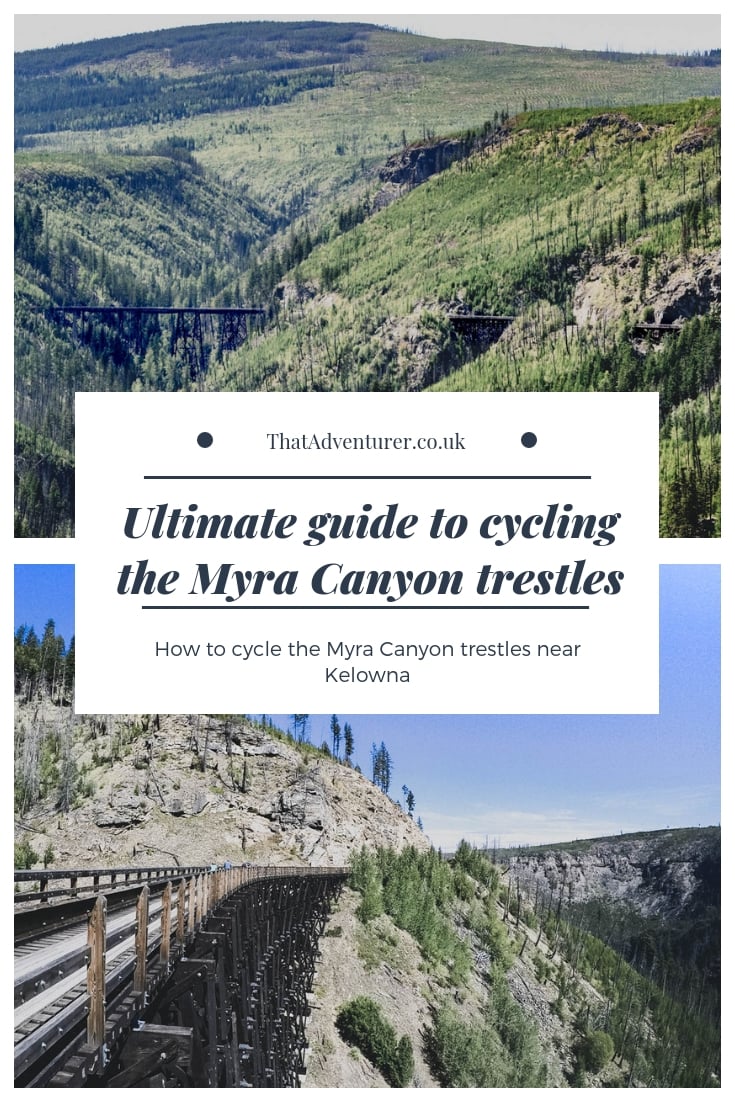 The Kettle Valley Railway (KVR) was built between 1910 and 1916.It’s the longest rail trail network in BC running from Hope to Castlegar.  It was built to connect the Kootenay region with the coast to make the most of the mineral wealth there.

The KVR ended up being 325 miles (500 kilometres) long and passed through three mountain ranges.  passenger service had ceased and in 1989, the last freight train rode the rails.

The Kettle Valley railway carried both freight and passengers through until passenger service ended in 1964. The last scheduled train went through in 1973 and the tracks were removed a few years later in 1980.

Nowadays the KVR is an extensive recreational trail providing almost 650 km (400 mi) of connected pathways throughout the region. Other popular parts of the KVR besides the Myra Canyon section are the Othello Tunnels near Hope and the Ladner Creek Trestle to name a few.

About the Myra Canyon trestles

The Myra Canyon trestles in Kelowna make up part of the Kettle Valley Railway. In January 2003, this section was even designated a National Historic Site.

However with this accolade came disaster. A forest fire ripped through Myra Canyon and destroyed 12 of the trestles. It took several years but all the trestles were restored and the Myra Canyon bike trail opened in 2008.

The Myra Canyon section of the KVR runs along a very deep canyon and was originally hand built.

This section of the Kettle Valley Railway runs between Ruth station and Myra station for 12km one-way, 24km round trip. It’s a super flat trail too which makes cycling the Myra Canyon trestles super easy.

Getting to the Myra Canyon trestles from Kelowna 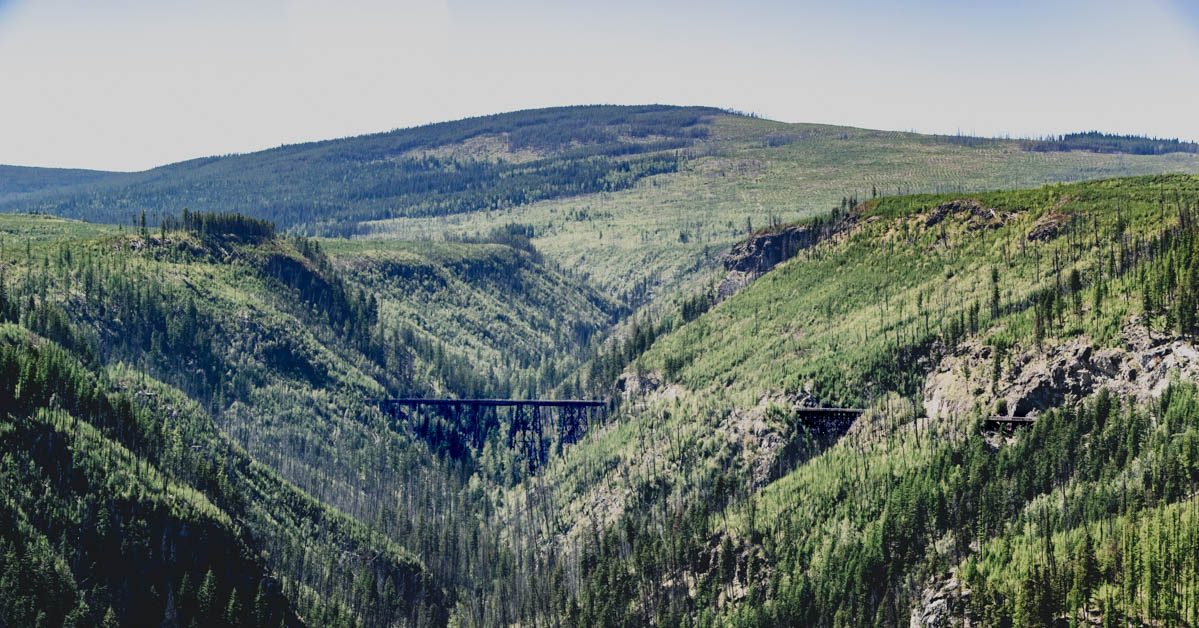 The Myra Canyon trestles are roughly 18kms southeast of Kelowna. The best way to get to the trestles is to take McCulloch Road and then the Myra Forest Service Road to the Myra Station.

Myra Station is the east end of the trestles. It’s where the majority of the trestles and both the tunnels are, but I’d argue the trestles on the west are the best. They’re longer and some are curved which makes them super fun to ride!

Both roads are gravel once you reach the Forest Service Roads but easy enough for all types of car between spring and autumn. 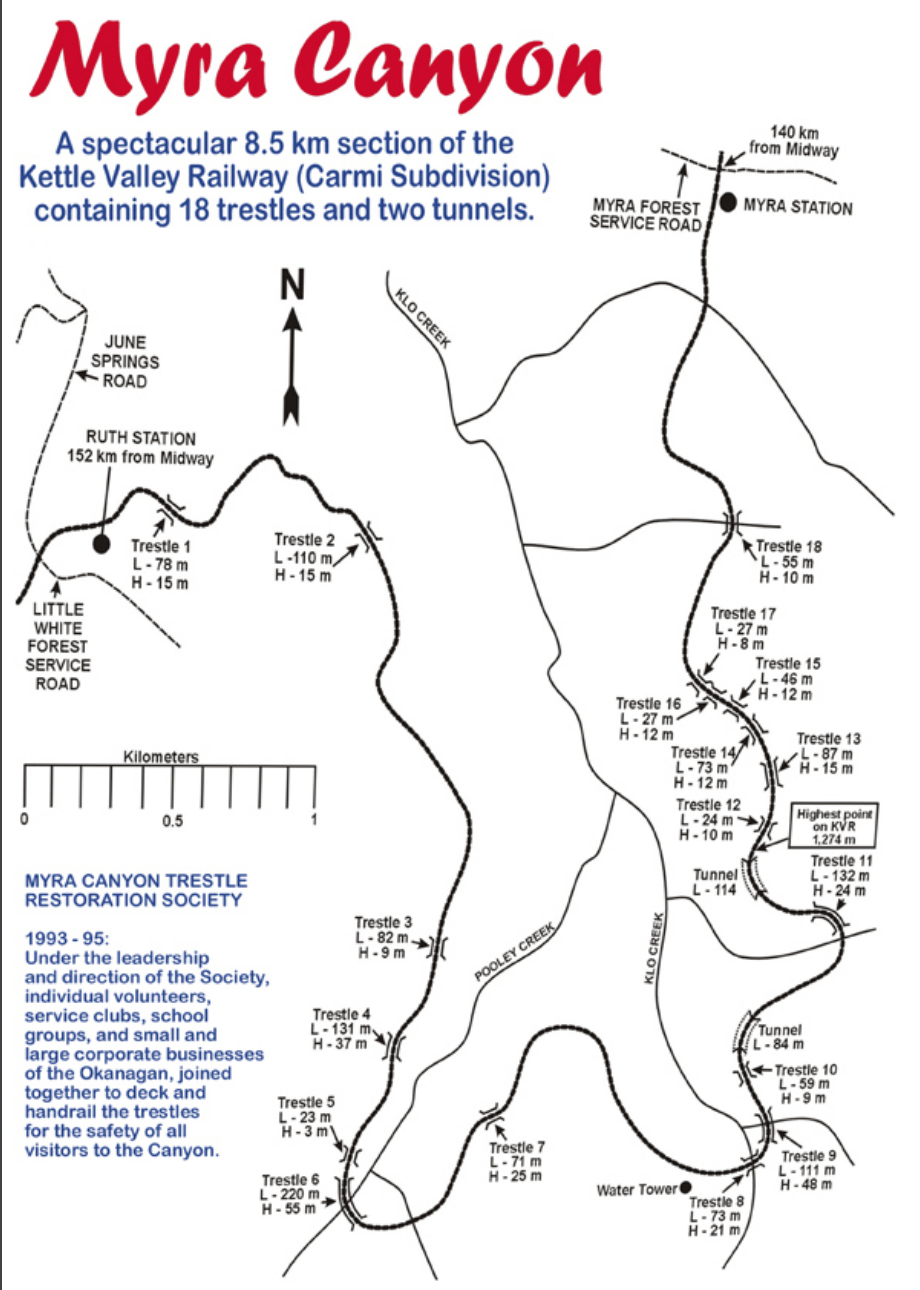 Can I rent bikes near the Myra Canyon trail?

This is super convenient since you then don’t have to transport the rental bikes to the start of the trestle trail.

They have bikes in all sizes and all rentals include a helmet. An adult half-day bike rental costs $39 + tax.

Where to stay nearby

We stayed at the Myra Canyon ranch A-frame huts. These were super budget friendly (just $25pppn) and also super cute.

If you’ve got a bit of a bigger budget then definitely check out the luxurious looking rooms at the Myra Canyon ranch.

If you’d prefer to stay in downtown Kelowna then check out these hotels and B&Bs.

How to get to Kelowna

Getting to Kelowna from Vancouver is easy. Simply follow the 1 eastbound out of Vancouver until you reach Hope. From here take the 5 northbound and switch to the 97c signposted to Kelowna.

You can also fly from Vancouver to Kelowna. Flight time is around an hour if you fly direct.

The journey from Calgary to Kelowna by car is longer (6-7 hours). But you’ll pass through Banff and other stunning places.

West Jet and Flair Air offer the cheapest flights from Calgary to Kelowna. Flight time is around an hour.

I always use Skyscanner to check and compare flight prices but be aware that Flair Air aren’t available through them. It’s still a good place to start to get a basic idea of flight cost.

If you need to hire a car then make sure to check out RentalCars.com since it’s super easy to compare hundreds of car hire prices.

Is it possible to bike from the Myra canyon to the Othello tunnels ?

Hello, they're very far away and so not something I'd recommend as I don't believe the old railway is still in place the entire journey. They're both great as separate trips though! Here's my post on Othello tunnels: https://thatadventurer.co.uk/explore-othello-tunnels-hope-bc/