Before my trip to South America I’d have told you I had no interest whatsoever in fishing. Who wants to sit at the bank of a river all day, come rain or shine, waiting and waiting for something, anything, to bite your line?

Not me that’s for sure. I’d rather be out doing something.

It’s fair to say I wasn’t exactly that enthusiastic about going piranha fishing in the Amazon. Especially given that we’d failed miserably once already during the trip. We’d tried fishing for piranha (or something other thapan reeds) whilst in the Pantanals but that just hadn’t worked out; there wasn’t much there. And it wasn’t just my fishing technique, there was quite a large group of us trying at different points along the river and noone caught anything other than someone elses fishing line. 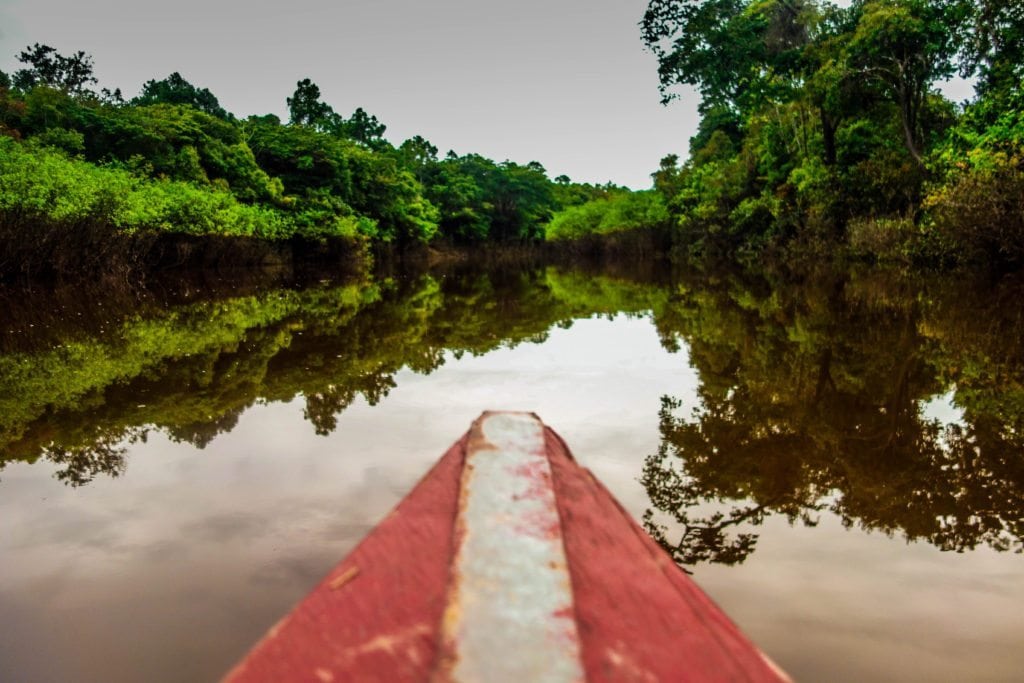 During our stay in the Amazonian village of El Chino, we were due to go piranha fishing again only this time which much, much more success.

El Chino is a tiny little village in the middle of the Peruvian Amazon. It had taken us about 4-5 hours on a motorised canoe to get there from Iquitos.

We were staying with a family in the village for a few days before heading off to the Galapagos Islands and hoping to see some Amazonian wildlife while we were there.

By our first afternoon, we’d already spotted monkeys whilst out hiking through the jungle and our second day was all about piranha fishing.

Piranha fishing in the Amazon river 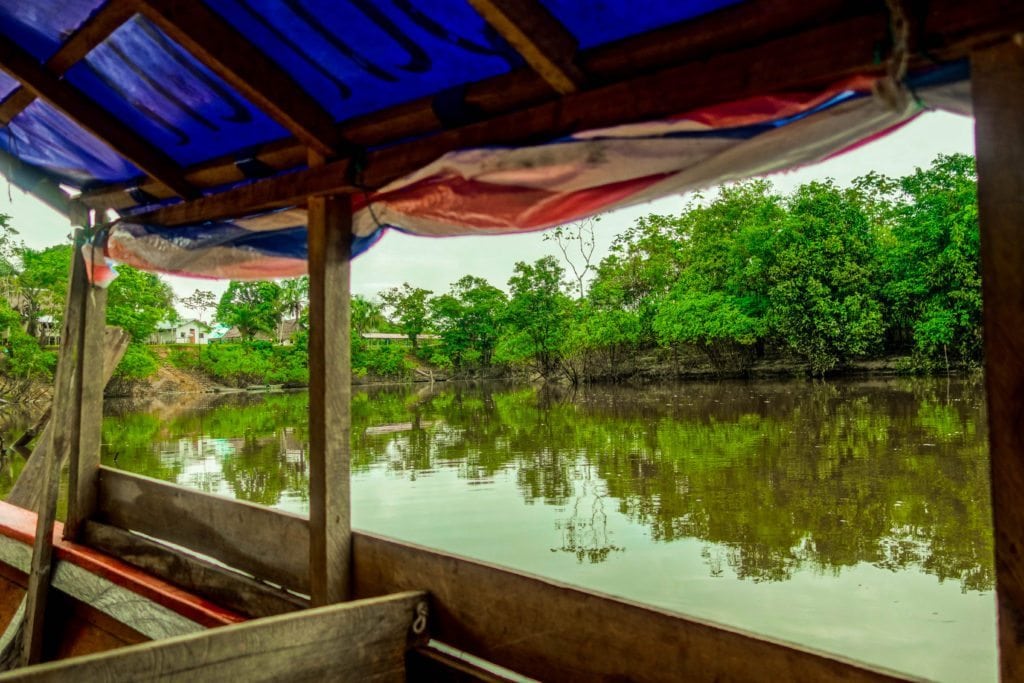 We headed out after breakfast with a guy from the village. He took us out on his canoe to a prime fishing spot.

Our rods were high tech (a bit of bamboo with some string tied on), and our bait was chopped up fish from a previous fishing trip.

Just as well the Amazonian fish were pretty cannibalistic!

Within seconds of dipping out rods into the river, we felt a nibble, a bite. I yanked the rod up only to find all the bait had been eaten and there was nothing at the end of my hook.

Another bit of fish. Another entrance into the river.

Our guide told us to move the rod around a little in the hope of hooking on a fish.

Within seconds I felt another bite.

This time I was ready for it and, as I pulled up the line there was a fish on the end of my line. 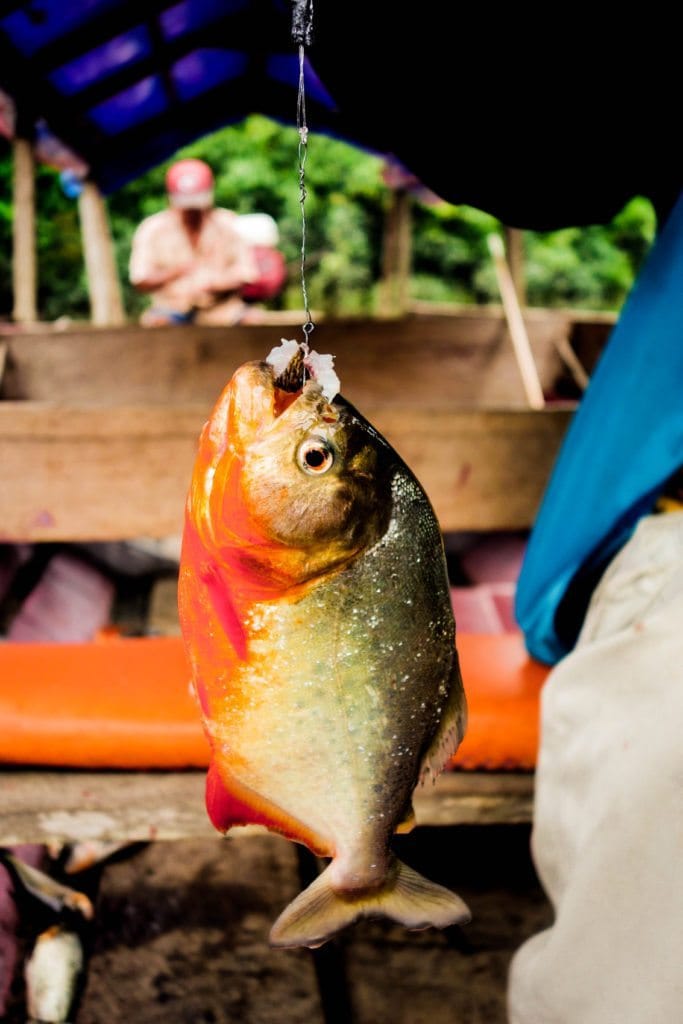 As I pulled up the line I’d almost hit my boyfriend in the face with the piranha. Not something you want to do with a fish known for its flesh eating tendencies…Ooops!

Our guide took hold of the piranha, avoiding its teeth, and explained we’d throw the piranhas back in. They were going to be very tasty for our dinner later on.

What surprised me most was the grunting noise they made when out of the water. It’s incredibly loud for a fish.

About an hour passed by with us catching new fish every second of all different types. If fishing was like this everywhere I think I’d take back my opening statement about not being a fan.

This was fishing at its absolute best.

In fact, I was almost disappointed when it was time to stop fishing. As we headed back to the village to show off our morning’s hall, our guide pulled over in a spot where he’d seen some electric eels recently. Sure enough, there they were. These huge, thick, slimely looking eels slowing gliding through some reeds. When out oar from the canoe got too close they light up. It was incredible to see but it sure makes you want to avoid falling in that river at all costs!

So if you too think you don’t like fishing, you’re probably just not doing it in the right place!

I'm intrigued by the electric eels! Congratulations on fishing out a piranha, it's a fine looking fish

AH great! brings back memories to my time in the Amazon rain forest. Visited last year and well..I hadn't fished in what? 10 years or more and there and then I just had to try. Piranha were my favorite wish when I visited our local zoo and my grandda would tell stories how they could devour a cow in minutes. Well turns out they looked rather puny in real life lol - sharp teeth or no :P

Thanks for sharing this cool experience with us! We are going to write this tips down as we are taking a year off in 2017 and plan to travel in South America for at least 6months :) Thanks to you now , we have added el Chino to our wishing list!