Fall in the US is something special. Those US Fall colours really pop with their reds, yellows and oranges. The States that makeup New England are some of the best US destinations for fall colours and this New England fall road trip itinerary will help you plan a fall road trip to see some of the best places to get photos of that special season where the leaves change colour.

Below, I’ve picked out some of the best towns and places in New England to see fall colours and have suggested some things to do in New England as you take this US fall road trip.

If you’re keen on visiting several destinations during fall in New England, then the best way to do so is to take a New England fall road trip. I recommend either hiring a camper van from Outdoorsy, or renting a car and staying in hotels as you travel around New England. I’ve picked out some of the best hotels for each destination mentioned below.

Alternatively, if you’re starting from New York, you can book an Escape campervan which has everything you’ll need.

Unfortunately, it’s difficult to say exactly when the fall colours in New England will be popping. Usually, the fall foliage in New England peaks at slightly different times with the northern states seeing their leaves change colour at the beginning of October, and the southern New England states peaking a couple of weeks later.

Because it’s so hard to give exact dates (it depends on the weather that year, how much wind and rain there has been), it’s best to keep a fairly loose plan for your New England fall itinerary. Having said that, hotels in the area do book up pretty early in advance since it’s a popular time of year to be visiting the area.

If you’re super set on staying in a particular hotel then book in advance, if it’s more important to travel and see the colours as they change, then book a campervan or take camping gear so you can be more flexible.

This New England fall foliage map is the best way to know whether the colours have changed.

Which are the best East Coast states for fall foliage?

Best places for fall colors in the US

Make sure you add these towns and areas to your East Coast fall road trip! 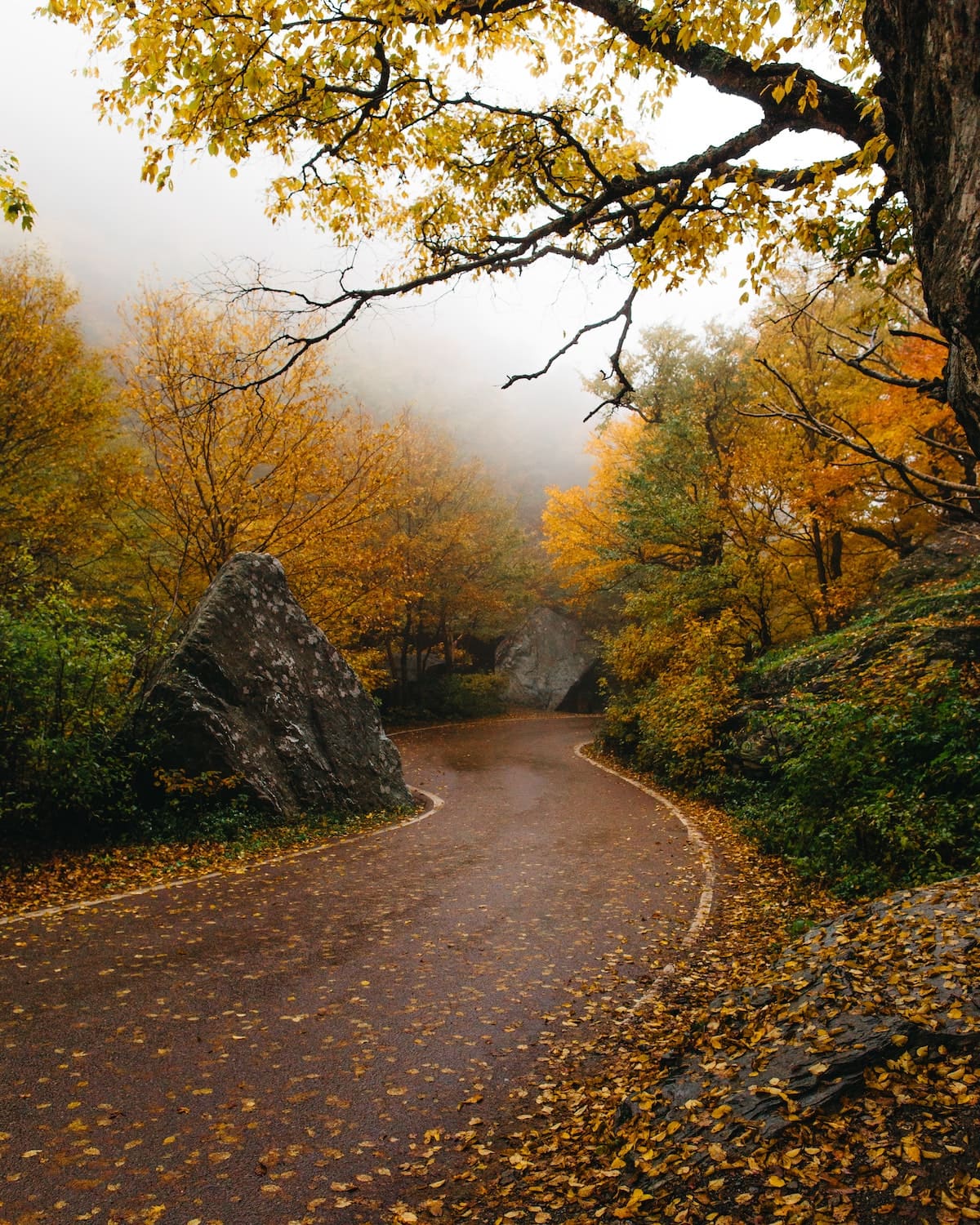 As mentioned above, Vermont is usually people’s pick when it comes to finding fall foliage. The red maple leaves against the mountains look spectacular and the roads are free of gigantic billboard advertising which makes it even more picturesque.

The town of Woodstock, VT is often said to be one of America’s prettiest towns. With its covered bridges, old general store and historic homes, it’s basically got everything you want to come across on a fall road trip in New England. 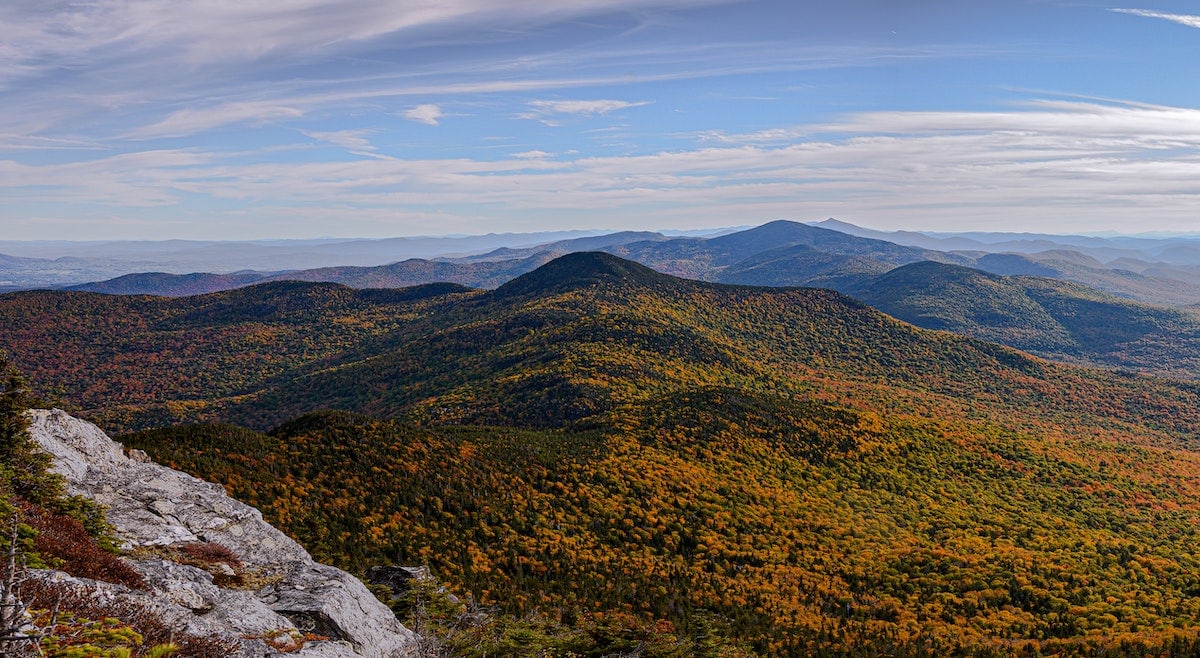 Another popular fall destination in East Coast USA is the town of Stowe. While known mostly as a ski tour, Stowe is also one of the most beautiful east coast fall destinations in the USA.  Stowe is home to some incredible hiking, restaurants and scenic drives making it a great stop on your fall road trip.

With huge mountains on either side and gorgeous mountain roads, Stowe is a must-visit destination in the fall!

Top places to in Vermont to photograph

Not far from Stowe, the lakeside town of Burlington in Vermont is another great destination for your fall foliage road trip. The town has an artsy vibe and is full of coffee shops, galleries and breweries.

The town overlooks Lake Champlain and has the mountains of New York in the background which make for some excellent fall photos.

Where to take photos in Burlington

When is the best time for fall foliage in Vermont?

The fall foliage in Vermont usually begins to turn at the mid to end of September, with the beginning of October being the highpoint. Most of the fall foliage has gone by the mid-end of October. 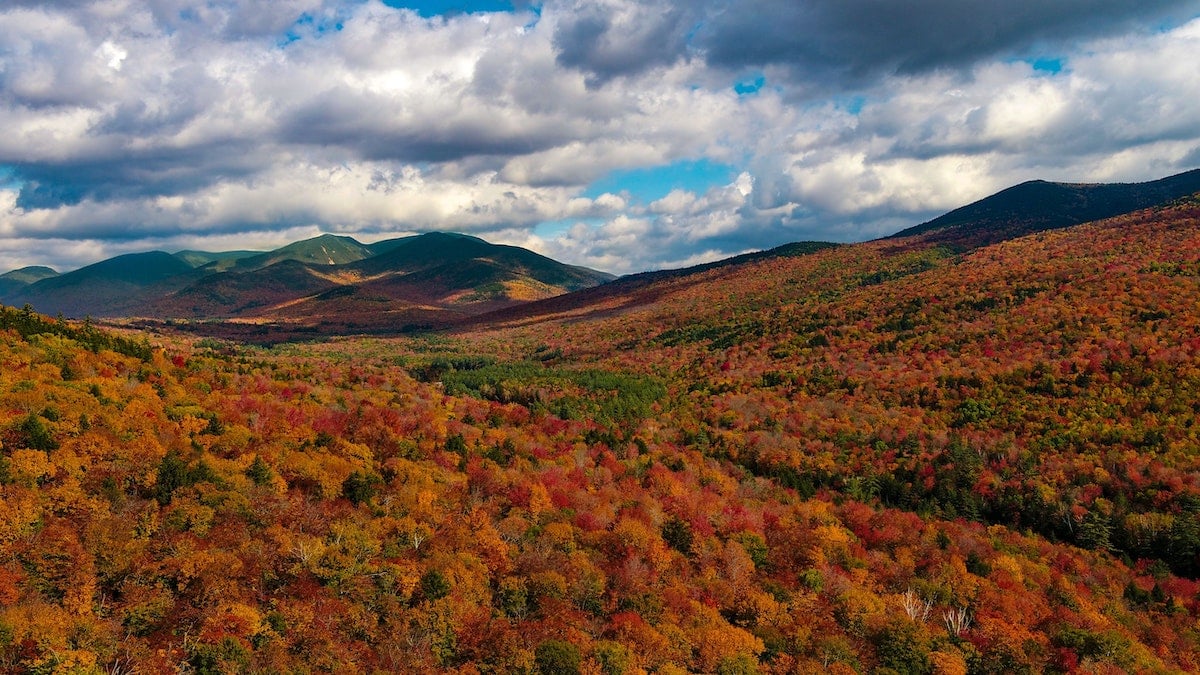 A trip to see the fall colors in New England wouldn’t be complete without exploring the White Mountains in New Hampshire. There’s plenty of hiking and leaf-peeping to do in the White Mountains areas and you’re spoilt for choice for foliage towns here. The towns of Sugar Hill and Jackson are great places to stay as are the more popular towns of North Conway and Lincoln.

When is the best time to see fall foliage in New Hampshire? 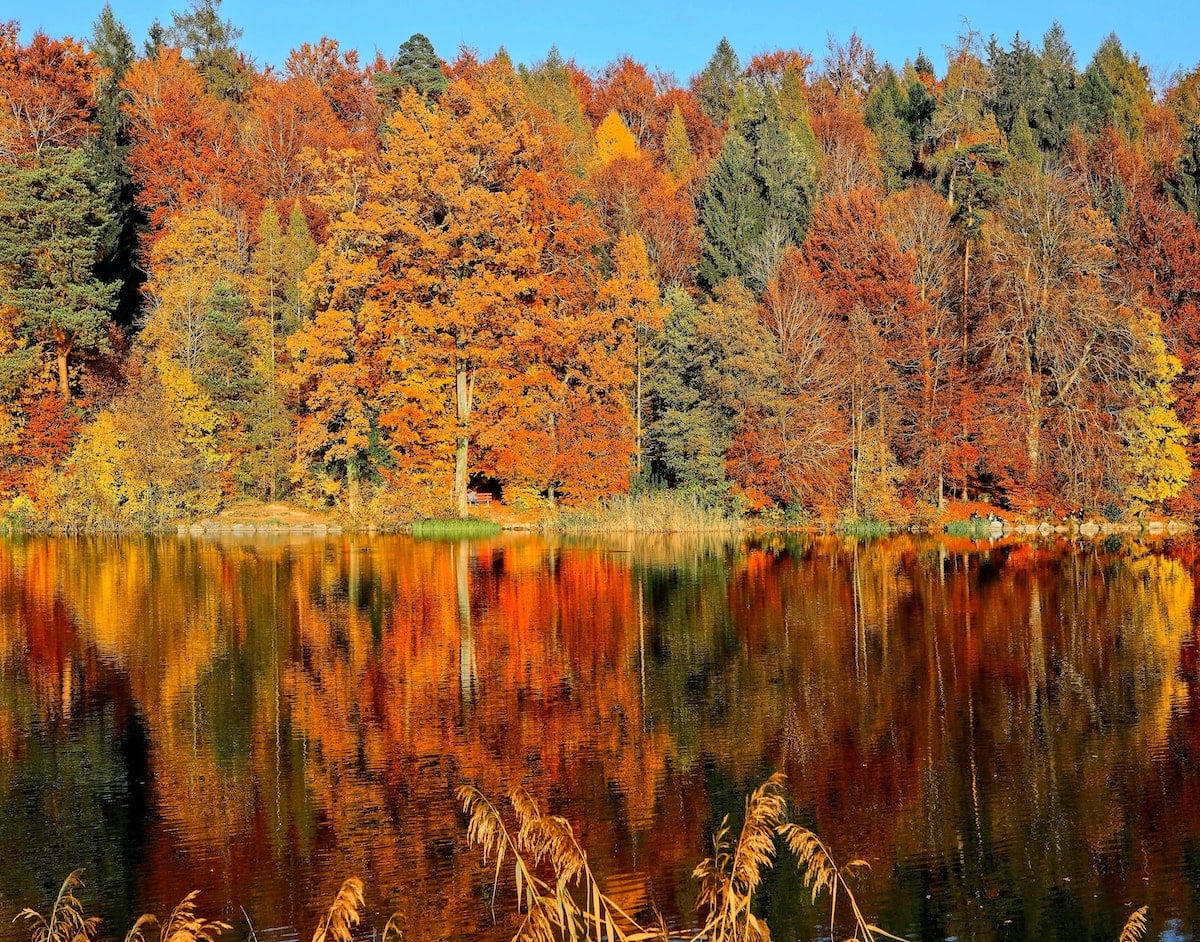 The Berkshires in Massachusetts is known for its cabins and beautiful fall foliage. You could spend the entire fall season explore this area. The Berkshires is just two hour’s drive away from the city of Boston and so is a popular getaway for those living in the city.

Best places for fall foliage in The Berkshires 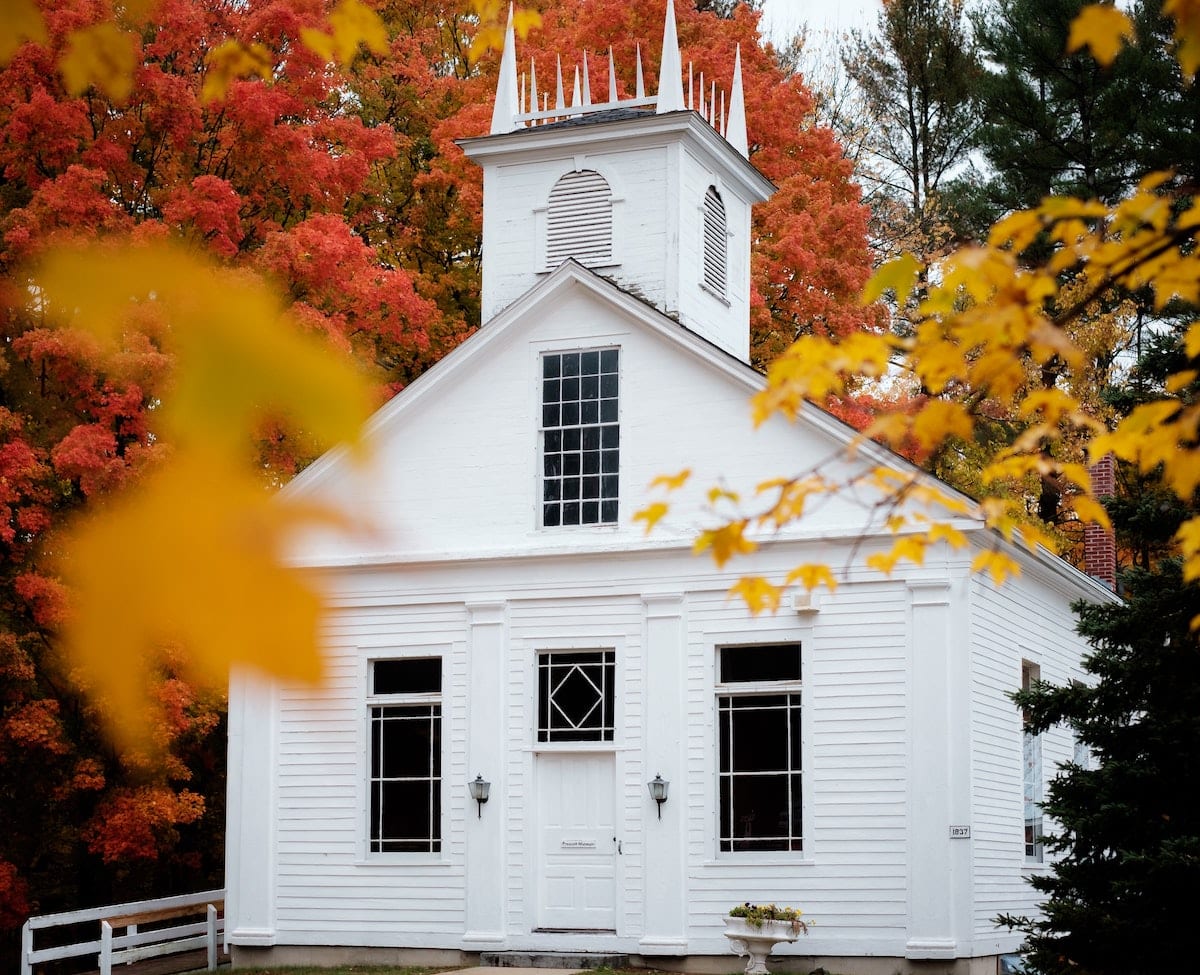 Fall doesn’t just mean autumn leaves and colours, it also means Halloween. Salem, MA is synonymous with Halloween celebrations, it doesn’t even matter if you don’t visit right at the end of October, you’ll still find yourself getting into the spooky side of things.

Site of the 1692 witch trials, Salem still has a witchy, eclectic vibe to it and thousands visit the town during the annual Halloween celebrations.

Plus, the town still has some great fall foliage to wander around. The peak is likely to be mid to late October given the town’s position on the coast.

When is the best time to see fall foliage in Massachusetts?

One of the more southern states in New England, Massachusetts’ fall colors tend to peak between the middle to end of October. The fall foliage in the Berkshires peaks a little bit earlier so plan to be there towards the beginning of October. 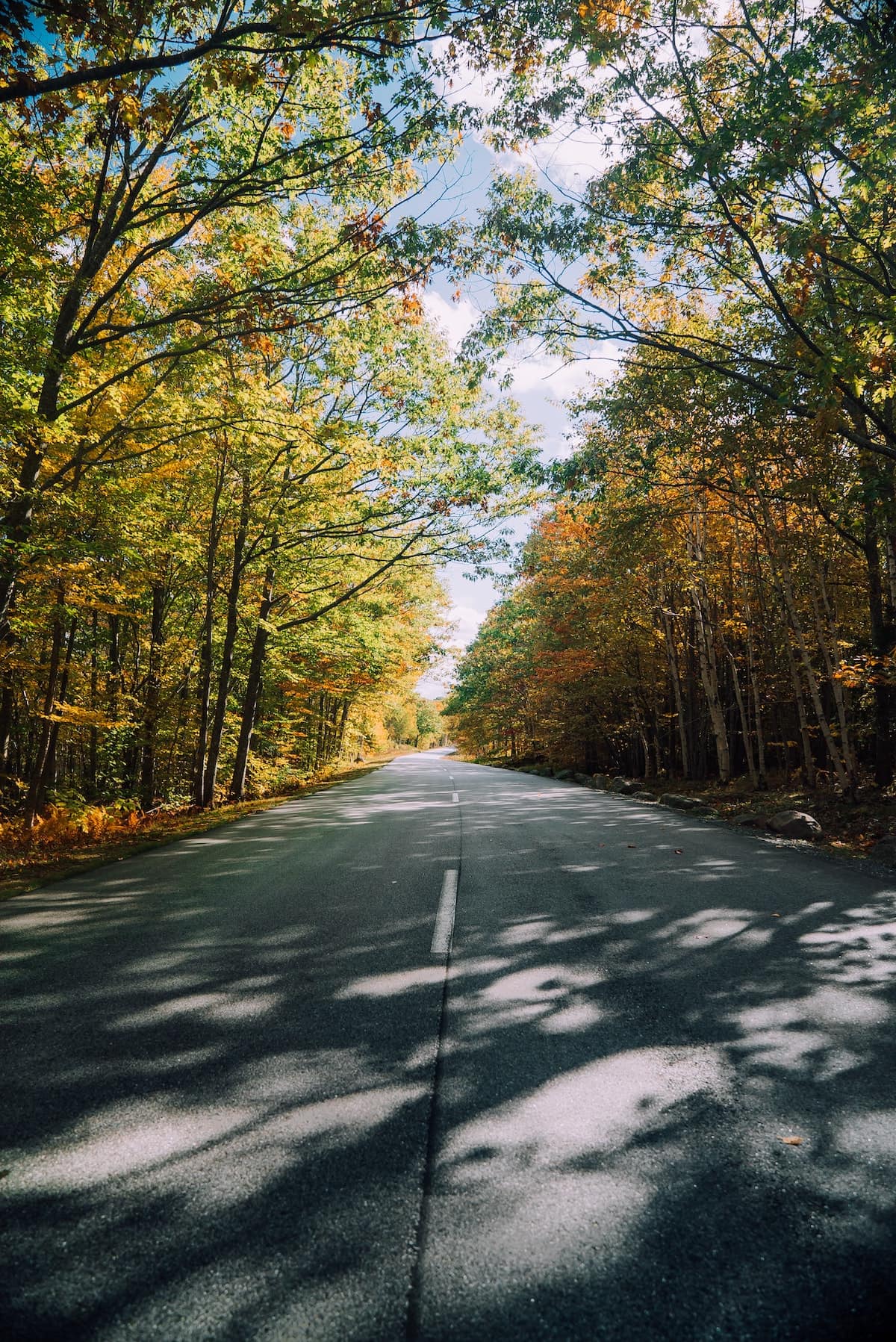 Acadia, Maine is beautiful no matter what time of year you visit but it’s even more special in the fall. The only National Park in New England, Acadia National Park has incredible hiking, scenic drives and plenty of beautiful fall foliage.

The 47,000-acre national park is on the coast of Maine, practically in Canada! There are some great hikes with ocean views and inlets.

Things to do in Acadia

When is the best time to see fall colors in Maine?

A large and long state, the fall foliage in Maine spans from late September to late October. The colors start to pop first in Acadia and then make their way southwards over the next few weeks.

A tiny town in north-west Connecticut, Kent is known for its incredible foliage. The entire Litchfield county that Kent resides in is beautiful for experiencing the best of Connecticut’s fall foliage! Connecticut claims to have the longest foliage season of all the New England States which means you should see some colors during your road trip.

Things to do in Kent & Litchfield hills

When is the best time for fall foliage in Connecticut?

In Connecticut, the fall colors tend to come through later than in the other New England states. Time your visit for the middle to end of October.