The first major city we arrived in during our road trip across the USA was New York City. We spent just under 48 hours in New York City and it was the perfect amount of time to see the main sites.

I’d be fortunate to visit New York City once before, but it’d been yeeeears ago so was super excited to revisit for 48 hours in NYC and introduce Thom to Manhattan too.

As we approached New York City, we stopped off in New Jersey to park up Elvis (our van). We’d found a car park by a park and ride into Manhattan on Parkopedia that promised cheap parking.

In fact, it was better than that – there was no cost at the weekend! From here we took the bus to New York City which was only about 30 minutes away.

We didn’t have a lot of time in New York City for a couple of reasons. One was that there was a storm coming and the other was that we had a house sit scheduled in for a few days’ time in Washington D.C.

However, 48 hours in New York is still plenty of time to get a feel for the city. You can always go back! 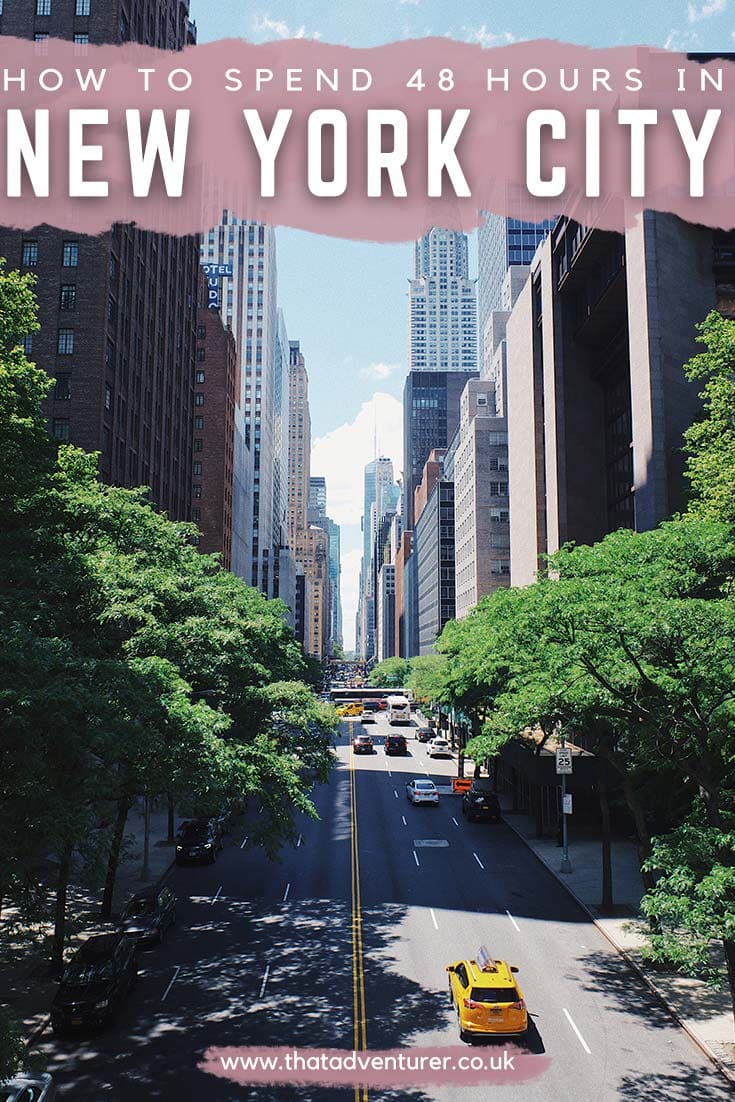 How to spend 48 hours in New York City 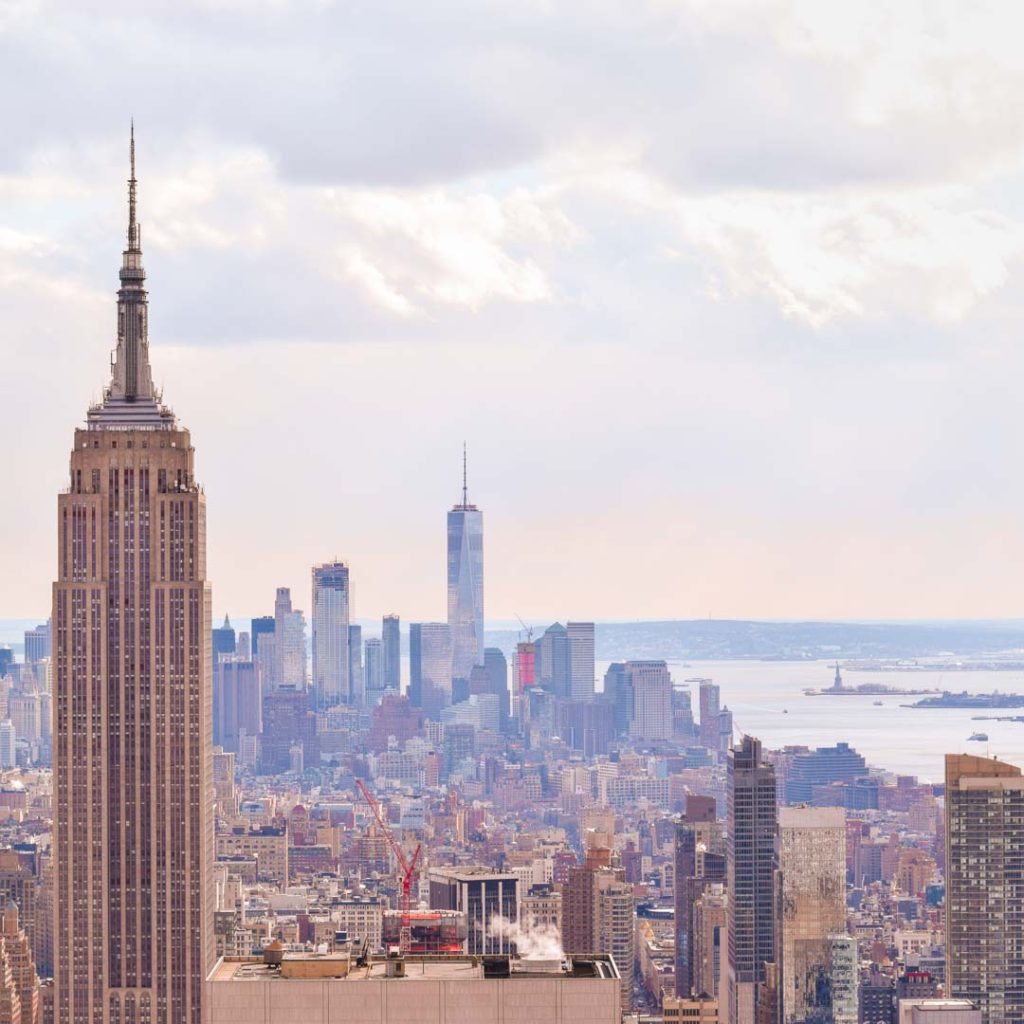 How to get around New York City

Getting around New York City is super easy and it’s one of the few American cities that actually has a good public transport system. We used the subway to get around downtown Manhattan and found it easy, cheap and safe.

You can also use Uber and taxis but these are going to cost you more. Alternatively, if the weather is nice you can just walk from place to place (although you may be knackered by the end!).

Uptown trains will take you to street numbers going up, and downtown means numbers will go down. A single ride fare on the New York subway costs $3.

Alternatively, you can get a ticket for one of the hop on hop off New York City buses. Yes, these are touristy but they’re actually a great way to get between the main sights you’re going to want to see anyway.

You can get your ticket for the hop on hop off NYC bus here.

Where to stay in New York City

Since you’re visiting New York for 48 hours, you’re going to need somewhere to stay. I have a whole post about the best places to stay in New York on a budget here. I’ve picked out my favourites from that list below: 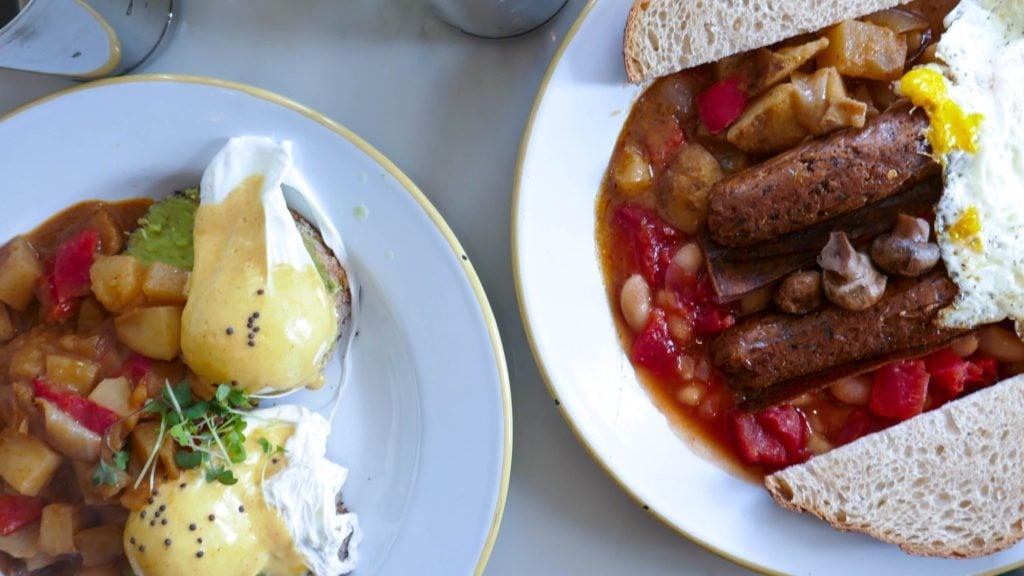 Breakfast in New York is a big deal and you want to make sure you’re sufficiently fuelled for a day of adventures in the Big Apple!

New York is known for its bagel scene and so grabbing a bagel for breakfast is always a good shout.

As too is a pastry from Maison Kayser or Dominique Ansel. If you’re after a heartier breakfast then go for brunch at a diner and fill up on eggs and pancakes smothered in syrup. It’s seriously hard to pick out the best places to eat in New York as there are just SO many.

On the Sunday we were in New York we went for brunch at the insta-trendy The Butcher’s Daughter. This restaurant is completely vegetarian (and mostly vegan), but there are still plenty of egg-based dishes.

Definitely try one of their smoothies. I loved the Brass Monkey a banana and peanut butter smoothie made with almond milk, honey and maca powder.

Of course, coffee is one of the most important (if not the most important) parts of breakfast and you won’t have to look hard to find great coffee. Some places to try are Stumptown Coffee Roasters, Southern Cross and Black Fox.

There’s also 9th Street Espresso in Chelsea Market which just so happens to be another great place to pick up some doughnuts to go with the coffee from the Doughnuttery.

What to do in New York City Day 1

Check out these places to visit in New York City for your first day of exploring.

Go to the Top of the Rock

Get a lay of the land by climbing up to the top of the Rockefeller Centre, also known as Top of the Rock NYC.

You can’t see The Empire State Building whilst you’re on it (obvs) so far that reason alone the Top of the Rock is the better choice in my opinion.

Entrance to The Empire State Building and The Top of The Rock where the Rockefeller Observations Deck is cost about the same ($34).

However, wait times for The Rockefeller Centre tend to be smaller. Or, if you go on a cold day in early March as we did then they’re non-existent!

OR Visit the highest oudoor skydeck in New York

One of New York’s newer attractions is the NYC Edge Observation Deck. It’s the highest outdoor Skydeck in the Western Hemisphere with 360° views of New York City.

The platform is suspended in mid-air, and features a thrilling glass floor experience and angled glass walls so it’s one for people who aren’t afraid of heights!

Book your ticket in advance here. 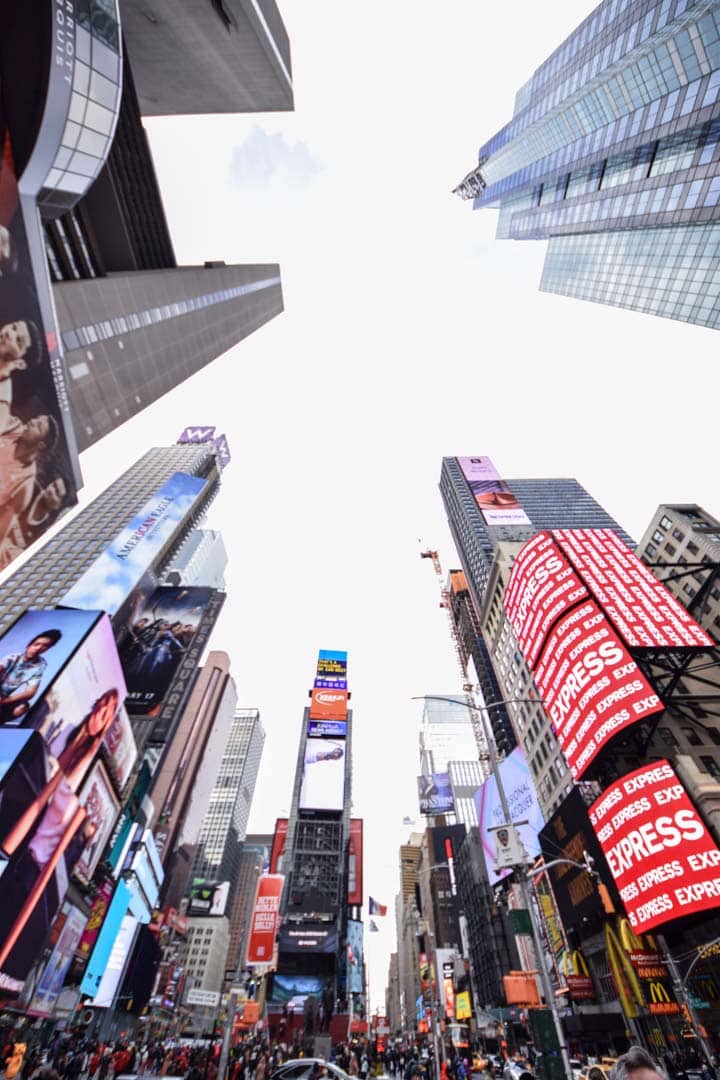 After you’ve got a feel for the layout of New York City, check out Times Square which is just a short walk from The Rockefeller Centre. Unlike other cities in America, you won’t stand out for walking from place to place so make the most of it!

Times Square comes into its own at night and a quick trip here is one of the best things to do in New York, especially if it’s your first visit. While nighttime is best, that’s not to say it’s not worth visiting during the day.

Being surrounded by the bright lights of the adverts you’ll feel as though you’ve stepped right into a movie; that’s how familiar its landscape will seem.

However, Times Square is super touristy so you’re not going to want to stick around long. The square receives 50 million visitors every year and around 380,000 people pass through Times Square daily!

You simply HAVE to go inside as it’s one of the most beautiful train stations you’ll ever see.

Downstairs there’s a food court so, if you’re getting hungry, fuel up on something before continuing on.

Head back to your hotel (or a cafe if you live in a van and have parked that over in New Jersey!) and rest up and freshen up before heading out to dinner.

Alternatively, just take a wander and walk around! Or, since you’re at Grand Central Station you can head to any of these pretty easily by getting the subway. Greenwich Village is a good neighborhood in New York for a wander.

For dinner in New York, I’d booked us a table at Jack’s Wife Freda for dinner. You do need to book Jack’s Wife Freda as it’s extremely busy pretty much all the time (so I’ve heard and indeed it was when we were there).

We went to the one on Carmine Street but there’s another one on Lafayette Street too.

The menu changes fairly frequently but I’d hazard a guess that whatever you order will be good. It’s Mediterranean based cuisine and between the two of us we demolished; lamb koftas with a tahini dip and pita, a lasagne and a whole trout with tabouleh then a chocolate cake and a Malva pudding. Yum.

After dinner, you could pop into to nearby Zinc bar (a jazz bar which we stumbled upon completely by chance). I’m sure there are plenty of places to go in New York for jazz & a drink, but I loved this one.

It costs $20 to sit in the same room as the musicians, but it’s free to sit at the bar. Personally, I think you’re better off sitting at the bar as you can still hear the jazz, but it’s quiet enough to have a conversation too.

Here are a few more places to see in New York (with lots of walking too!). 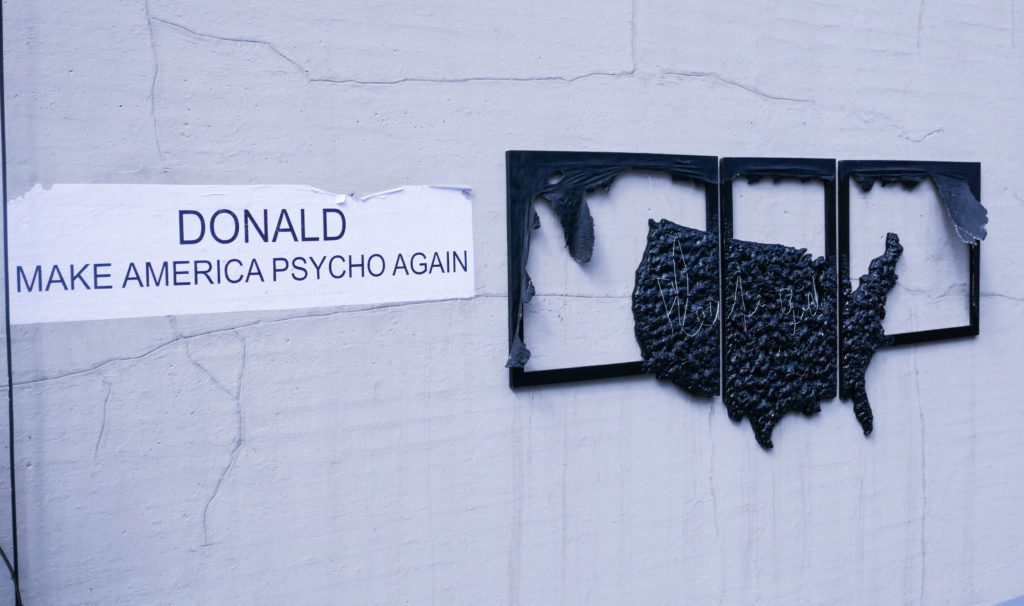 Walk off brunch by strolling along The High Line. The High Line is a 1.45-mile-long path, mainly along the Hudson River, that has transformed what was previously a disused railway line. I bet it’s even more enjoyable in summer as our feet were kinda freezing when we walked along in early March! 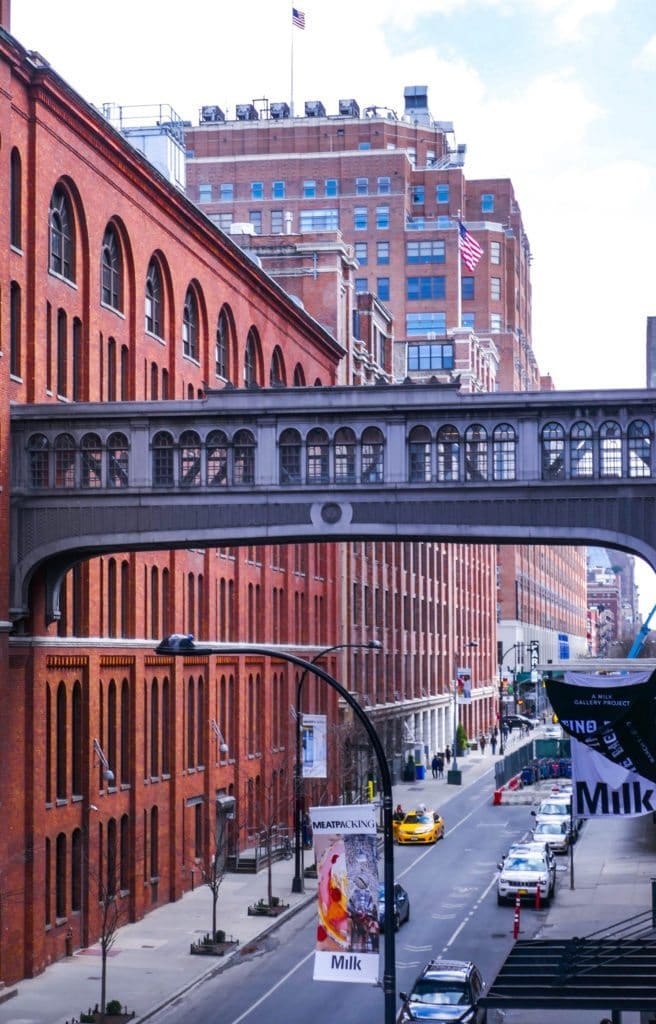 There is usually some sort of art installation along The High Line and when we visited it was all about ‘Journeys’.

There was plenty of anti-Trump artwork and graffiti too which we both rather appreciated.

Give yourself at least an hour to walk this must do in New York.

You also get a pretty good view of The Empire State building from time to time too.

Our Sunday was all about walking so next we rode the subway up towards Central Park.

We wandered around the ice rink in Central Park, the theatres, past the zoo and all the way up to the Reservoir (it’s a pretty long walk if you’re up to it!).

Don’t forget to indulge in some people-watching.

Although Stanley Park in Vancouver is actually bigger (and prettier I think!), the 843 acres of green grass, maple trees and ponds that is Central Park is beautiful no matter the season.

While you’re up this end of New York City, you may as well explore the acclaimed MOMA which usually has some modern art you’ll either love or hate.

While we didn’t do this time around I have done it before. Modern Art isn’t everyone’s cup of tea, but even if you don’t like the art, you’ll usually find something to talk about!

Get skip the line tickets to MOMA!

Since we were tired, frozen and needed to get down south to avoid the incoming storm, we didn’t walk over Brooklyn Bride (but we did enjoy a pizza in the van underneath it).

Brooklyn Bridge and DUMBO (Down Under the Manhattan Bridge Overpass) are two very popular places in New York City.

DUMBO is an area you will have seen many a time on Instagram (girl on the street with the bridge in the back), and it’s a cool place to go get your own photo too.

Nearby, the historic Brooklyn Bridge is one of the oldest roadway bridges in the United States and was the first steel-wire suspension bridge. It’s believed it’s inspired more art than any other manmade structure in the US.

It’s also been in a huuuge amount of TV shows and films so it’s sure to look familiar even if you’ve never seen it in person before. 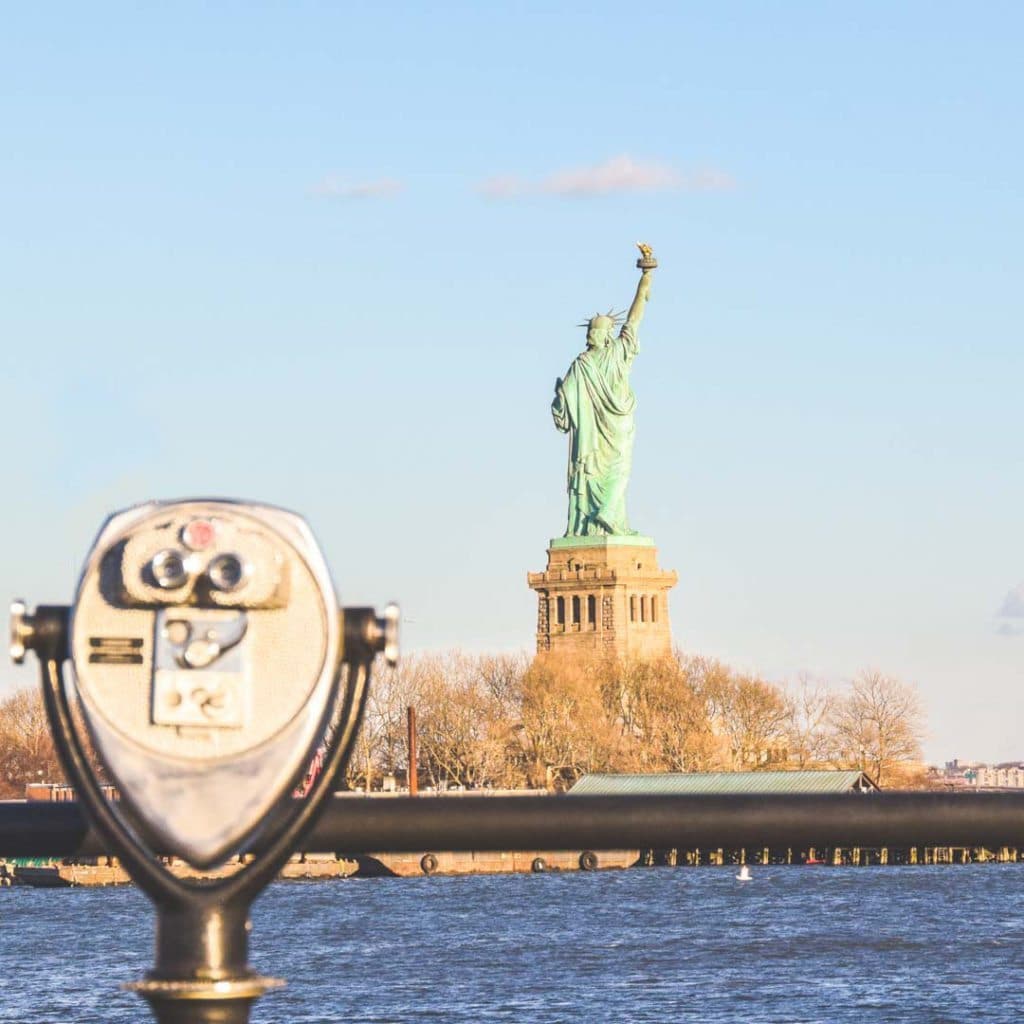 I’d been to The Statue of Liberty on my previous trip and this time we found another location to admire the statue from.

We crossed over into New Jersey and stopped off at Liberty State Park. We took a short walk around and admired the view across the water without any crowds which was great!

Some more of the best places to eat in NYC that I researched but didn’t get the time (or have the stomach capacity) to go to include: