Us British folks are good at queueing we understand how to stand in line better than most other nations. So, when it comes to Wimbledon, one of the highlights of the British sporting calendar you can be sure there’s a good queue in there somewhere.

Whilst I’m not a tennis player, there’s something about this very English fortnight that gets even those least interested in sports excited. Millions tune in to the BBC to watch people hit a ball back and forth over the net, people spend thousands on tickets in a hope of seeing their favourite player, whether Murray, Nadal or Djokovic, on centre court in the men’s Sunday final. And hundreds decide to camp overnight or wake up before dawn to join ‘The Queue’.

I’ve been a queuer on multiple occasions and the atmosphere in the queue is almost as good as on Murray Mound itself. There’s something about sitting in neat lines in a big grassy field with hundreds of other ‘keenos’. Grab your bacon buttie, buy a paper off one of the merchants walking up and down the line and enjoy the queue with my 5 handy tips!

How early is early? It all depends on how set you are on getting an elusive centre court ticket and how early or late you go in the two week sporting period.

If you’re not up to camping the night before for a chance to bag centre court tickets, then make sure you arrive super early to get your place in the Wimbledon queue.

I’ve previously arrived before 6 am and found myself somewhere in the 100s. All queuers are given a ticket to the queue which is numbered to assure there’s no queue jumping. If you’re above number 100 you can probably rule out your chances of getting tickets for centre court and court No1. 2) Bring a blanket & something warm.

No matter how nice the weather turns out to be, it’ll be cold when you’re queueing before the sun’s fully risen. Make sure you take a jumper or a warm coat.

A picnic blanket is a must for Wimbledon – as is packing a picnic! – is also makes for a great way to keep warm on Murray Mound if it’s chilly.

Chances are you’ll want a quick nap before the queue starts moving when the grounds open at 9.30am, so a picnic blanket comes in very handy – roll yourself up in it and it’s a bit like a duvet! If you forget your picnic blanket, don’t worry you might be able to get one for free…

3) Choose your paper based on the freebies.

Arriving early and sitting in a field at a time when most people are still tucked up in bed means there’s only so many times you can refresh Twitter, Instagram or Facebook before getting bored.

Luckily there’s plenty of special edition papers being sold at the Wimbledon queue, the majority (if not all) of which have a free gift included.

Some of the best gifts include picnic blankets which are very handy for when it comes to sitting on Murray Mound if you’ve forgotten yours. Others giveaway book bags and they often have special Wimbledon guides to let you know who’s playing where and when so you don’t have to fork out on a programme (although they make great souvenirs!).

Once the queue gets moving it moves pretty quickly and it’s a fair old walk from the field you start in, to the courts, so make sure you wear comfy shoes! You’ll want comfy shoes the entire day anyway as you walk around from court to court, but I have seen some women attempt high heels – believe it or not…

5) Enjoy & soak up the atmosphere!

The Wimbledon Queue is probably the most organised queue you’ll be part of so don’t be a grump. The queue at Wimbledon is like no other. It’s undoubtedly the most fun you’ll have queueing for anything. Ever. Way better than those “entertaining” clowns at Disneyland, that’s for sure. Everyone is there to have a great day so get stuck in and enjoy what’s (probably) the most famous queue in the world! 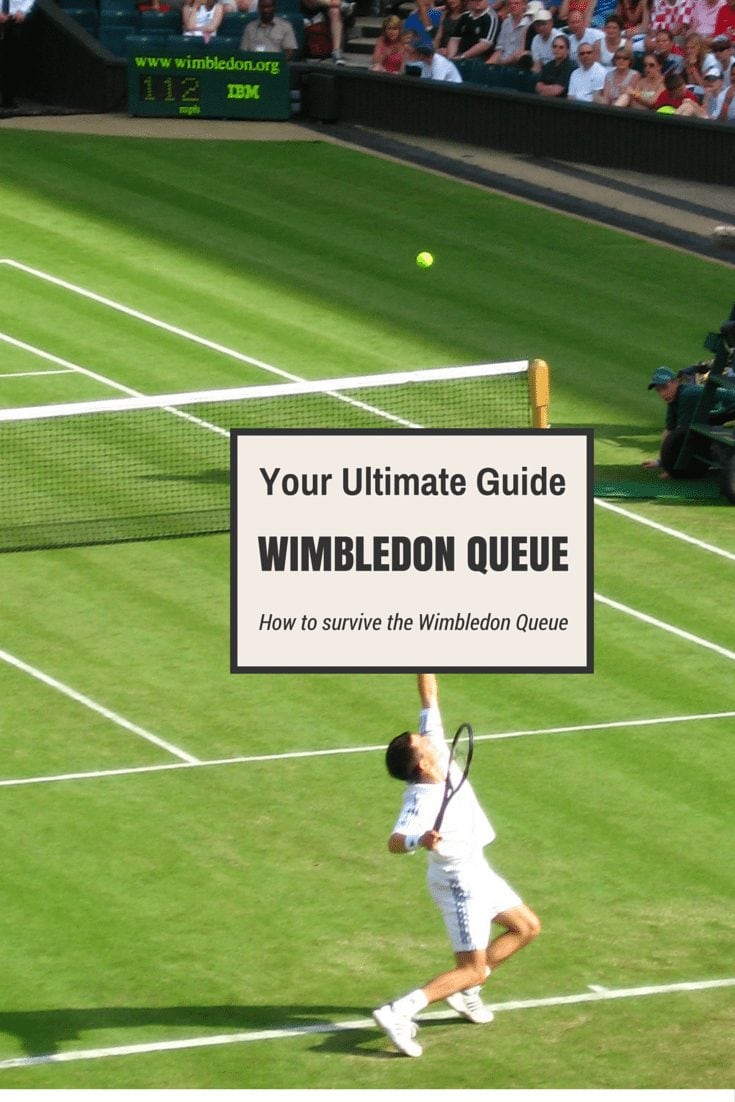 Great advises! I am planning to go this year for the first or second day of Wimbledon. I´m currently studying in the UK but I come from the Dominican Republic. How early would you recommend me to arrive if I want to secure centre court tickets for the first day?

Thanks Lucy! It was a very hot & sweaty day on Saturday when I went! x

I lived in Wimbledon for 5 years and the town was amazing during Wimbledon, so much fun! I always promised to myself that I'd go one year but never did! What a dumbo!

You'll have to do it one year soon!

These are fantastic tips - I need to bookmark them for next year!

thanks Emma! Im planning to queue on saturday - love Wimbledon!