I didn’t know much about Mongolia before we booked our Trans Mongolia railway tickets. In my mind Mongolia was full of yaks, rolling green hills and Ger camps. And, whilst that’s true to some extent, there’s so much more to know about Mongolia. Mongolia has a huge and fascinating history, hails a ruthless dictator as its national hero and its capital city is a huge sprawling place with a mix of Russian and Chinese influences. If you’re travelling to Mongolia then here are a few things to know before you go. 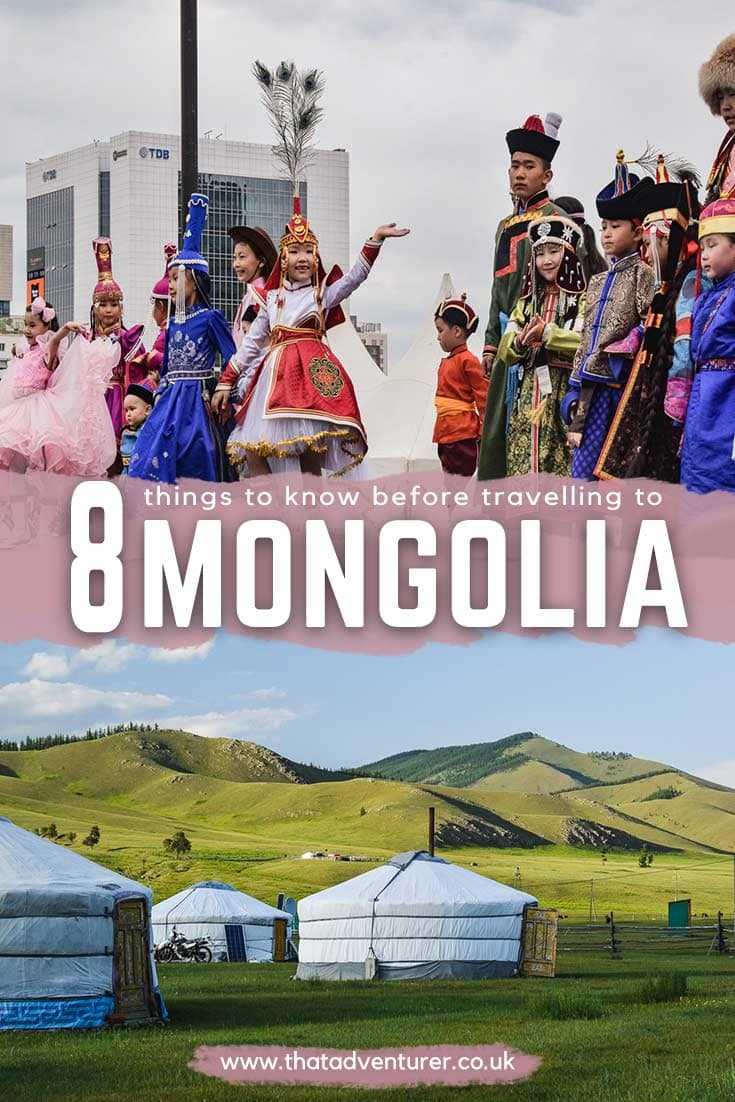 They don’t use addresses

Mongolia is an interesting place in many ways and one of those is the way in which they don’t use addresses. You won’t get very far by giving a taxi driver the address of your hostel or hotel when you arrive in Mongolia.

So what do they do? Well, they tend to use landmarks more often than not. If you’re staying in Ulaanbaatar you’ll most likely be better off telling your driver how far you are away from Sukhbaatar Square than by giving the address.

Mongolia uses the ‘what three words system’ (at least in guide books). This is a way of having addresses made up of three random words. Whilst Lonely Planet gives these three words for everywhere they recommend in their Mongolia guide book, we asked several Mongolians and were told it’s not something they ever actually use.

At first, you might think that this makes Ulaanbaatar very difficult to navigate, but we didn’t have any trouble getting around the city. Mostly because the main downtown core is pretty small and walkable.

Paved roads are few and far between outside the city 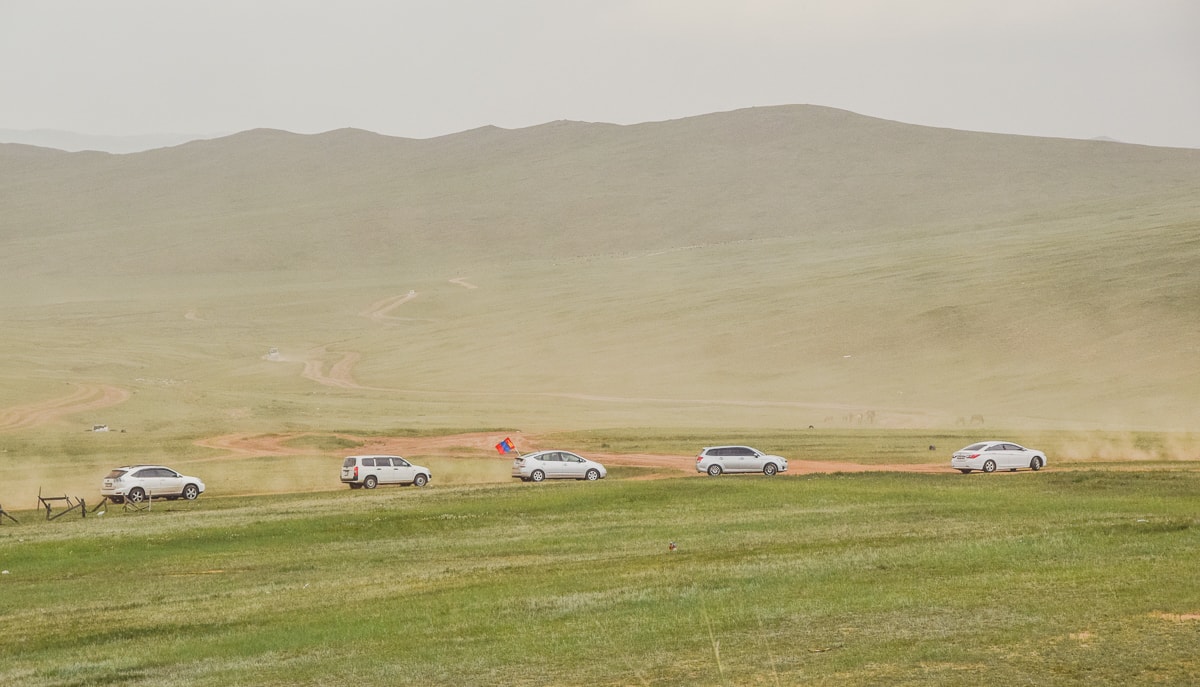 Another key consideration and thing to know about Mongolia is that paved roads are few and far between. Sure there what you’d expect and are familiar with around Ulaanbaatar, but leave the city and it’s a whole different story.

If you plan on travelling around Mongolia you’ll need a 4×4. The roads are bumpy, dusty, pothole-ridden and, to be honest, kinda messy.

If you want to visit Ger camps or visit the desert you’ll be driving dust tracks. As well as having a 4×4 make sure you know how to change a tire as chances are you’ll probably get a flat!

I really hadn’t expected Mongolia to be as westernised as it is. There were a lot of designer brands, shops selling H&M and Zara (but interestingly didn’t see the actual stores), and independent coffee shops everywhere. 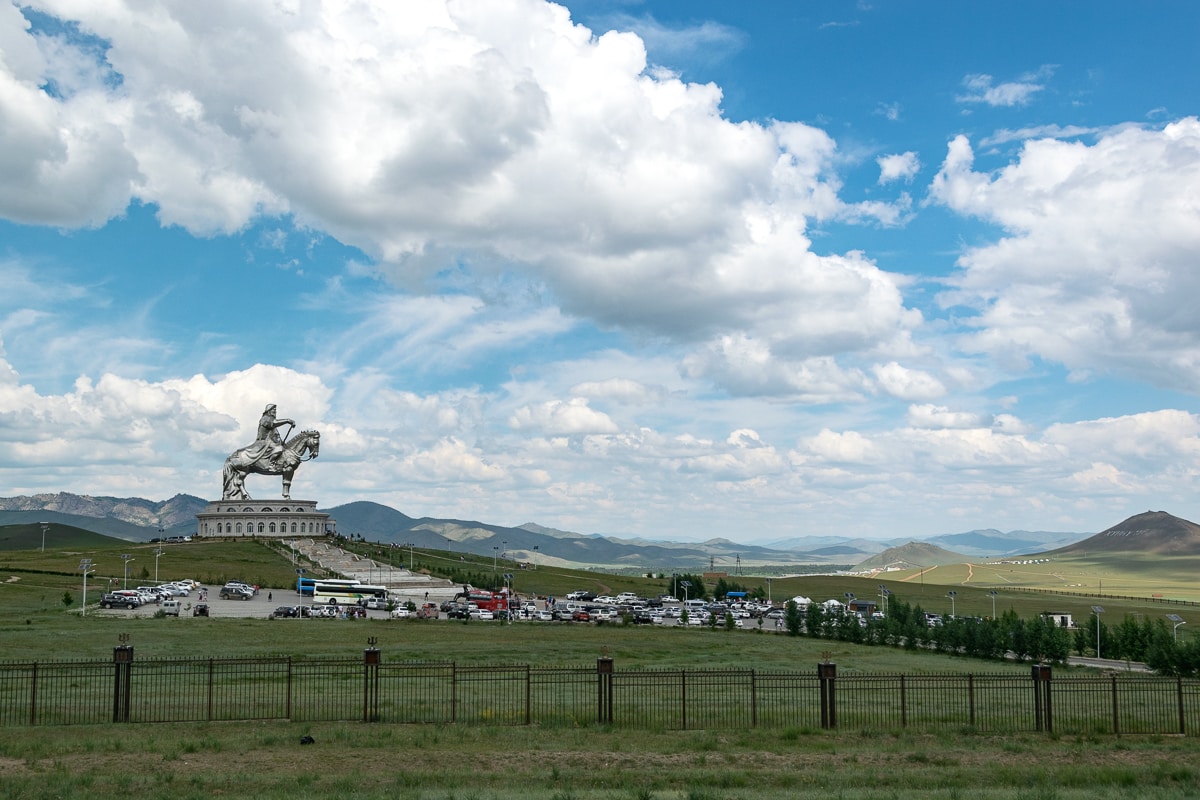 Ulaanbaatar is a huge city

Ulaanbaatar is a huge, sprawling city. It’s getting bigger every year as more traditionally nomad families make a move to the city. On the edge of the city, you’ll find gets alongside houses under construction before it changes to big glass skyscrapers and Soviet-style facades.

Approximately 45% of the entire population of Mongolia lives in Ulaanbaatar and it’s not likely to change anytime soon.

While Mongolia might be famous for its clean air, don’t expect any clean air in the winter in Ulaanbaatar. In the winter the city turns on its “city heating” which keeps the temperature in all the main buildings downtown at around 25 degrees. As the heating is mainly done by burning coal, there’s a big cloud that hangs over the city. 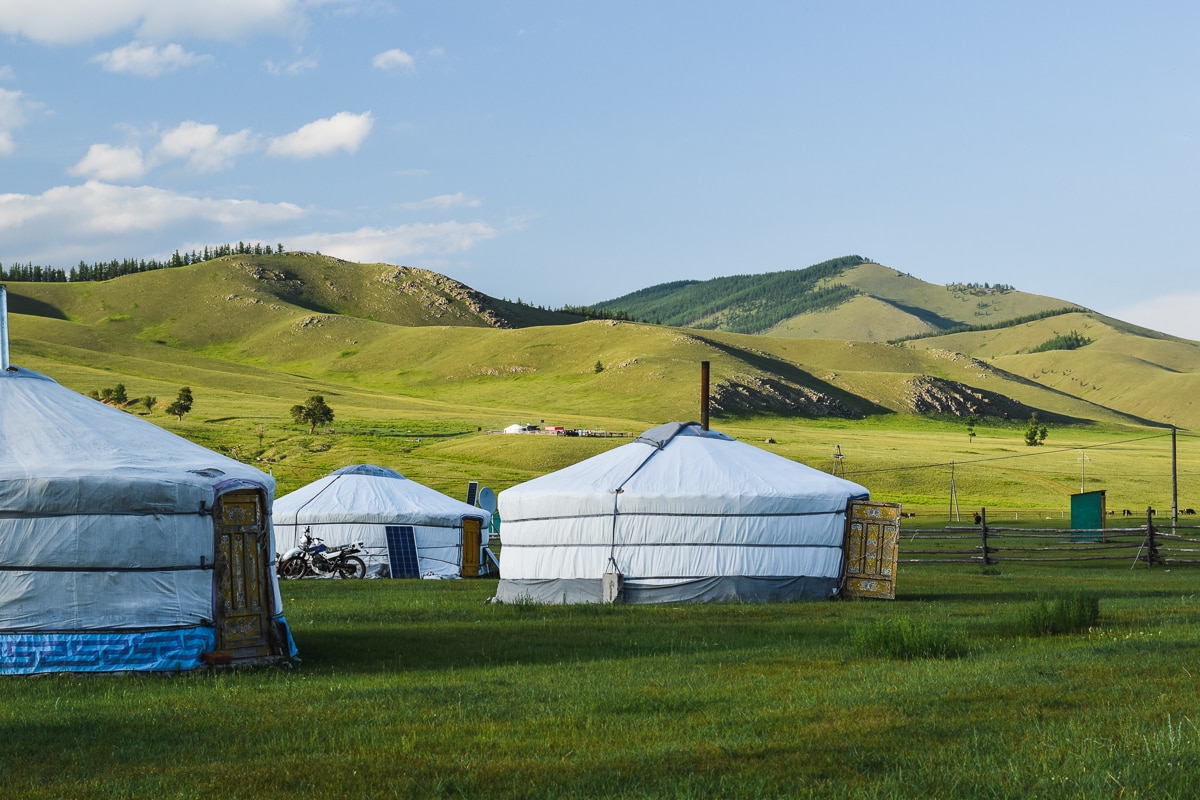 The climate is extreme

Mongolia as a whole has a pretty extreme climate. It has long, very cold winters and short, hot summers. The Gobi desert which covers much of the south of Mongolia gets virtually no rain and even the rest of the country experiences around 257 cloudless days a year on average!

The weather in Mongolia in January is commonly -20 degrees and can reach -40 overnight. Whereas in summer you can expect high 30s, the variation is huge!

The average annual temperature of Ulaanbaatar is -2.9 degrees celsius but that’s simply because the winter is so long. When we visited in mid-July is was high-20s to mid-30s every day. 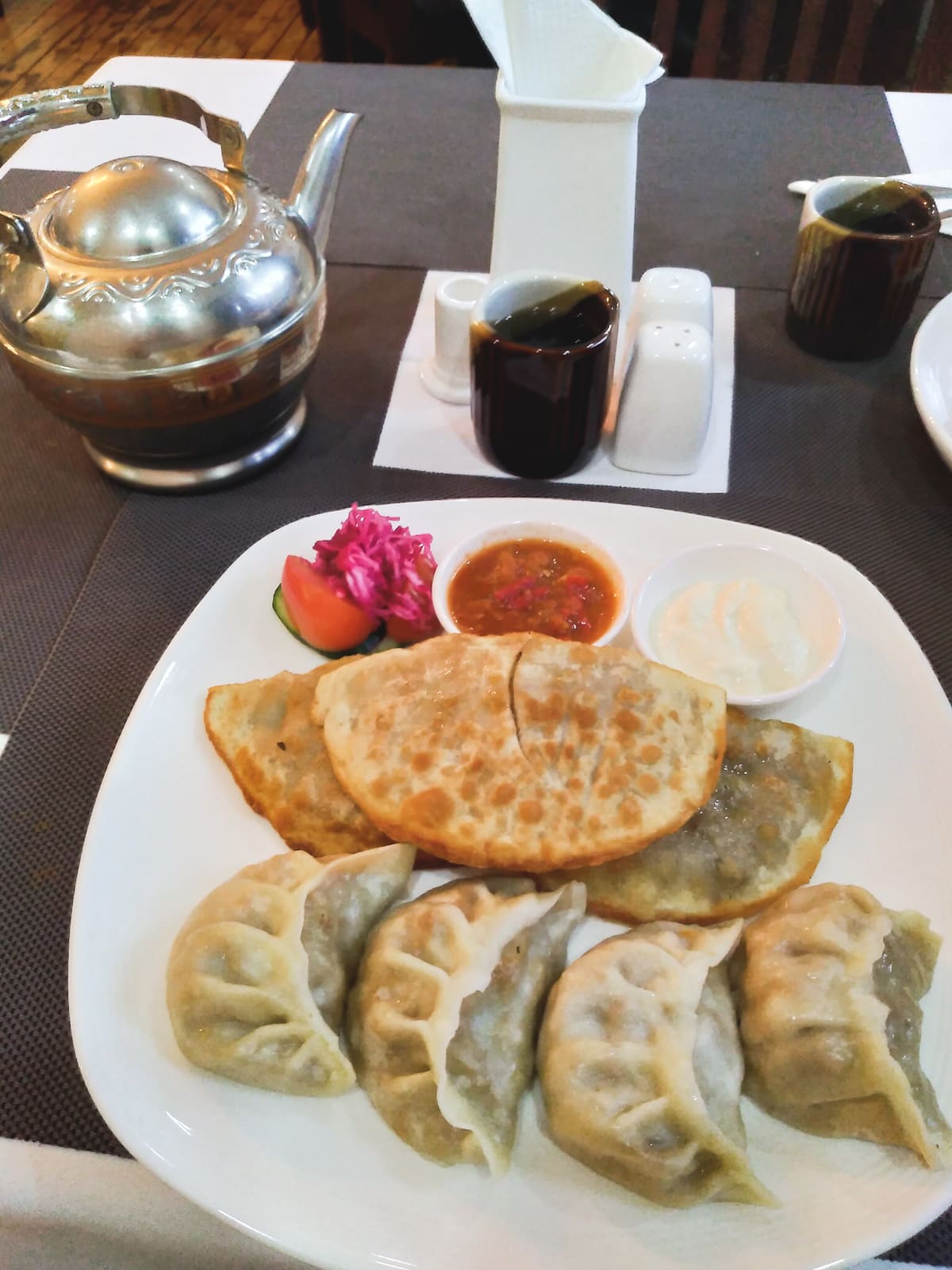 Typically food in Mongolia is hearty and meat-heavy. That’s in part due to the long cold winters where you want something filling rather than tropical fruits like you’d find in south-east Asia.

However, despite the fact that in the countryside you’ll find a lot of fried dough and meat items, Ulaanbaatar has a burgeoning vegan and vegetarian scene. We were super surprised at the number of vegan restaurants in the city and they’ve all got their own vegan version of traditional dishes such as buuz so you won’t feel like you’re missing out!

Mongolia is one of the friendliest places we’ve been

When we arrived at the Ulaanbaatar train station after catching the train from Beijing to Ulaanbaatar, we were unsure of how to get to our hostel. Whilst trying to get some wi-fi, a representative from a tour company came over to us. “No, no, we’re not interested,” we said, thinking she was trying to sell us a tour. “Where are you staying?” she asked and “Oh, I can give you a lift there, we’re going near there anyway”. We made sure she understood we had no Mongolian tögrög on us and she replied it was fine, she’d take us there for free.

That’s never happened anywhere we’ve travelled before. Normally you’re approached at train and bus stations by taxi drivers who know they can charge you double the usual.

This wasn’t the only time we encountered super friendly and helpful Mongolians. From passersby on the streets to our guesthouse host, this truly was one of the friendliest places we’ve been.

Ulaanbaatar is full of guest-houses with super friendly hosts. During our time in Ulaanbaatar, we stayed at 2 guest houses and at the first we had the most helpful host we’ve ever met on our travels.

Most hostels and guest houses also run their own tours if you’ve yet to book anything.

Where to stay in Mongolia

Chances are you’ll spend a few days exploring Ulaanbaatar, in which case be sure to check out these hotels and hostels in Ulaanbaatar, Mongolia.

There are lots of guesthouses and hostels in Ulaanbaatar which offer budget accommodation for your trip to Mongolia. Many of them will help you out with a transfer from the airport of the Ulaanbaatar railway station to the hostel.

Ulaanbaatar hotels are few and far between but there are some. However, you should expect to pay a lot more compared to what you get for the hostels.