Have you ever attended Hogmanay in Edinburgh? You’re going to want to after reading this guide to Hogmanay. I promise you that going to Hogmanay was the best New Year’s I’ve ever had. The best part is that’s it’s not all about the one night which puts pressure on those last few hours of the year to be full of joy and hope. Hogmanay is split over several days and personally I think that’s the best way to do it.

Usually I don’t really celebrate New Year’s Eve. I might have a few drinks but I’ve never been one to go out and party on New Year’s Eve (although I’ve tried).

It tends to go like this: it’s reaching 31st December and everyone is talking about plans for the evening. Perhaps you’re going to a house party, paying extortionate prices for club entry that you’re not really up for, or staying in to watch the telly. Once the fireworks end it all feels hugely anticlimactic.

But Hogmanay? Well let’s just say that the Sots know how to party. Edinburgh’s Hogmanay is one of the biggest and best New Year’s Eve celebrations in the world. There are events throughout the city of Edinburgh over three days and over 100,000 people attend. You can expect a huge street party, Vikings, several fireworks displays, flaming torches and live music. Want to know more? Check out the guide to Hogmanay in Edinburgh below.

With 10 seconds to go before the new year, there’s a big count down and then at 12am you can expect cheering, kissing, some singing and perhaps some dancing too. The song that’s usually sung is Auld Lang Syne which was written by Scottish poet Robert Burns.

What happens during Hogmanay in Edinburgh?

There’s so much that happens during Hogmanay in Edinburgh. It’s arguably the best city to spend it in since they go all out. However, I think their rivals in Glasgow may have a few things to say about that.

Without further ado, here’s a guide to Hogmanay in Edinburgh. 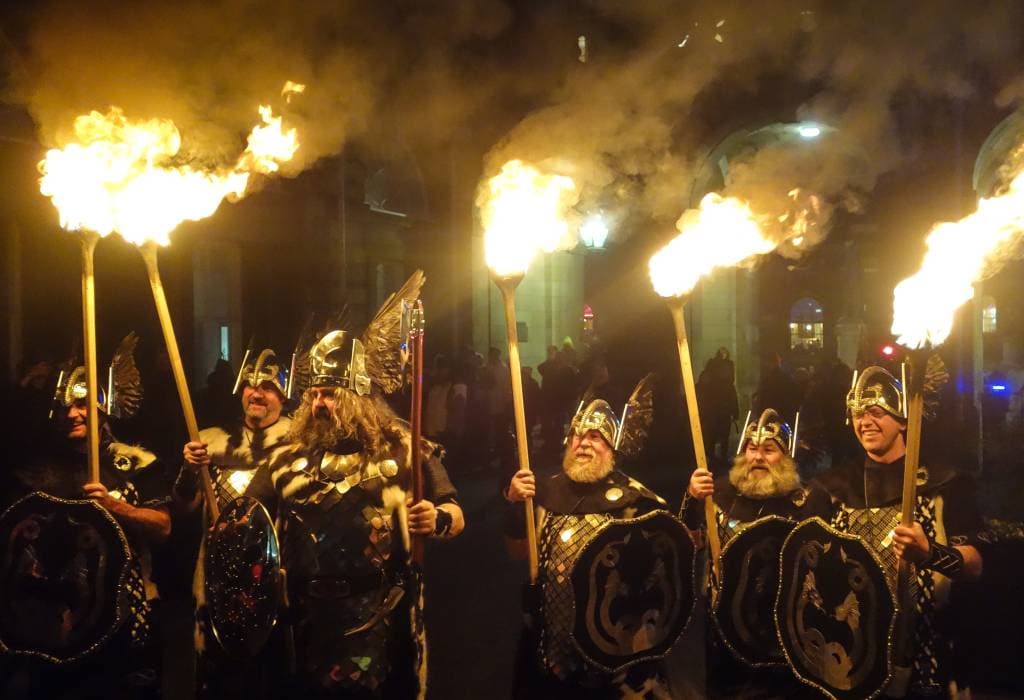 The Hogmanay festivities kick off on 30th December in Edinburgh.

It starts with a torchlight procession through the streets up towards Calton Hill which is a UNESCO World Heritage Site.

The procession isn’t just any ordinary one. It’s led by Vikings fully kitted out in all their gear. They’re followed by around 8,000 torch-wielding revellers  and a further 70,000-80,00 watch and walk along with them.

The procession starts from The Mound and once you reach the top of Calton Hill there is a massive bonfire and incredible fireworks. Honestly, you’d think the fireworks on the 31st couldn’t possibly get any better. But, somehow, they do.

31st December: The big one! 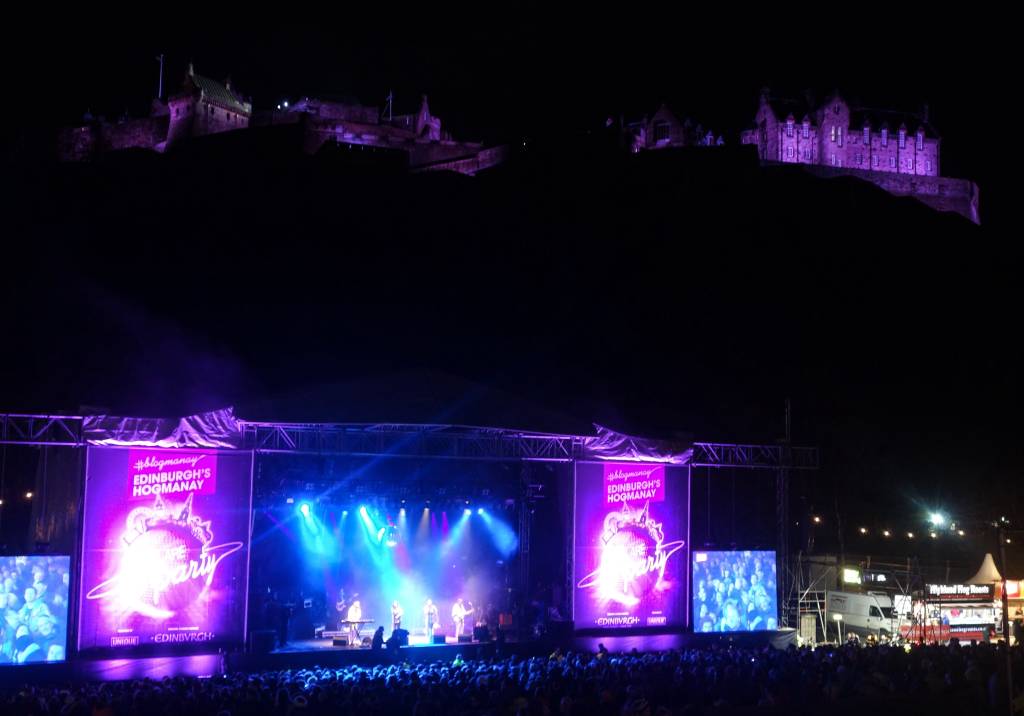 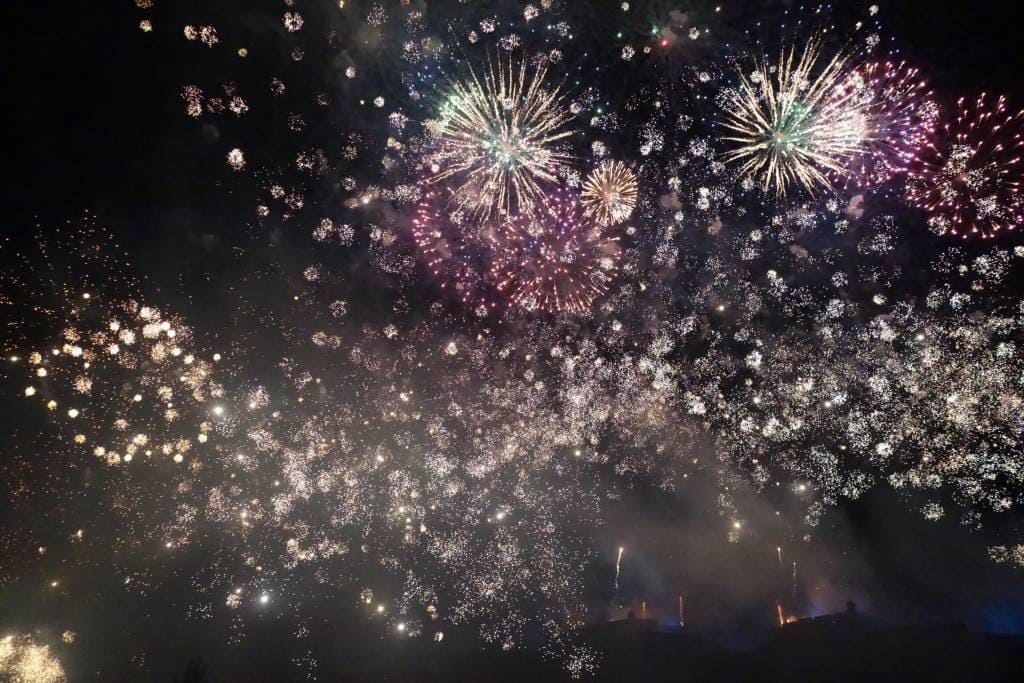 On Hogmanay Eve Edinburgh gets ready for a street party of Brazilian proportions.

There’s a buzz of excitement throughout the city on 31st December. If you haven’t already, today is a good time to go and explore the Edinburgh Christmas Market or Edinburgh Castle.

Then, when it gets to evening you’re spoilt for choice when it comes to which party to attend.Across the city there are 5 stages all playing music to get you in the mood for a part. There’s the Candlelit Concert at St Giles Cathedral, the Old Town Ceilidh (a traditional Scottish dance), the Concert on the Gardens, the Street Party and the fireworks for the Midnight Moment.

The build up to 12am

As 12 o’clock looms the bands take a quick break and the countdown begins.

The fireworks at midnight are the fourth of the night. Yes, that’s right, Edinburgh’s Hogmanay doesn’t just have one set of fireworks; it has four. Each set of fireworks increases in size from 9pm finishing in the spectacular as the bells strike 12.

When I attended Hogmanay in 2014 the castle lit up in different colours as the bells struck midnight for the first time ever. The fireworks are choreographed to music and are in two locations: the castle and Calton Hill. They’re the most impressive I’ve ever seen and far better than those along the Thames in London. 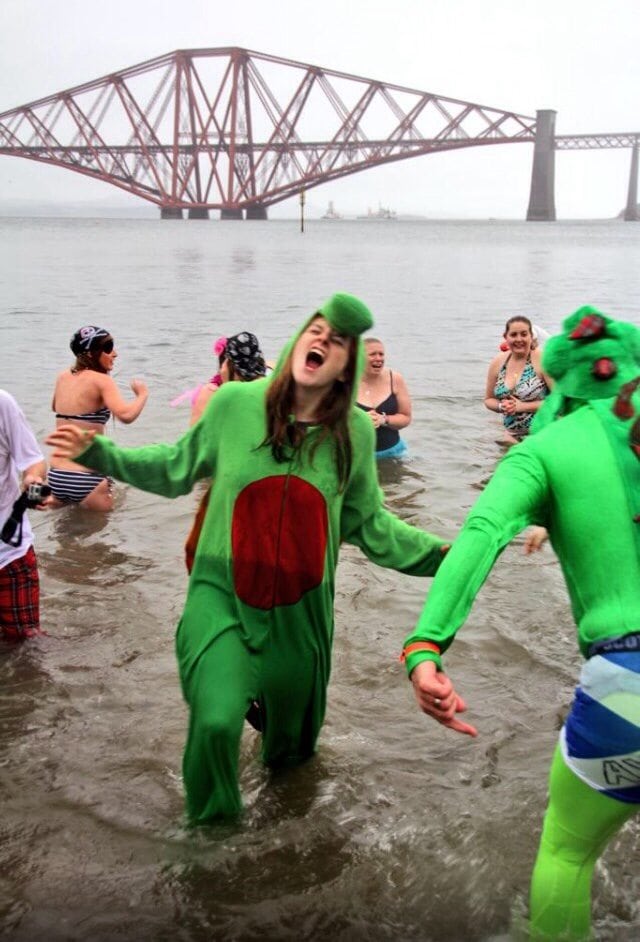 Nursing a tender head? What better way to clear it and start the new year than a dip in the Scottish waters at South Queensbury with around 1,000 others in all types of crazy fancy dress?

On New Year’s Day at Hogmanay, 1000s of people fill the small town of South Queensbury just outside Edinburgh and take a dip in the Forth under the gaze of the iconic Forth bridges.

Those taking part are paraded through the village to the sound of drums before throwing themselves into the chilly waters.

Having done more than my fair share of icy dips, it turns out that the waters in Scotland are warmer than the waters in Norfolk – who’d have thought?

If jumping into icy water isn’t your thing then Edinburgh puts on another celebration: Scot:Lands.

This is a one day performance art festival that takes place all over the Old Town of Edinburgh. Each station (Land) is curated by local artists. You can expect incredible theatre, music, performance, film and art.

You need to pick a pass up for Scot:Lands and this randomly allocated you a ‘Land’. When you visit that Land you’ll then find out about the next one. You can visit as many as you want and there are about 10 locations, you’re find your first one by starts spinning a compass at the National Museum of Scotland. It’s free to join in .

Are there any Hogmanay traditions?

There are lots of traditions which people take part in to celebrate Hogmanay.

One of the Hogmanay traditions is known as ‘First Footing’. This involves cleaning the house and removing any old ashes in the fireplace. This symbolises clearing out the old year to make way for and welcome in the new one.

This is also celebrated at Hogmanay. In this instance the first person through the door on Hogmanay should bring with them things like coal, shortbread or cake.

One of the reasons there are so many fireworks at Edinburgh’s Hogmany is that they’re linked to the idea of warding off ‘evil spirits’.

What to pack for your Hogmanay celebration

Where to stay in Edinburgh

When I attended Hogmanay I stayed at Motel One Edinburgh Royal. The location was ideal, you can’t get much better for the Hogmanay celebrations.

All accommodation gets expensive during Hogmanay. If you have friends in Edinburgh, see if you can stay with them. If not then just try and book super far in advance. Here are a few suggestions of cheaper places to stay:

How to get to Edinburgh

You can fly, drive or catch the bus or train to Edinburgh depending on where you live. I always book my flights through Skyscanner as they tend to offer the best deals on flights.

Edinburgh is a relatively small city so you can easily walk around it during the Hogmanay celebrations. 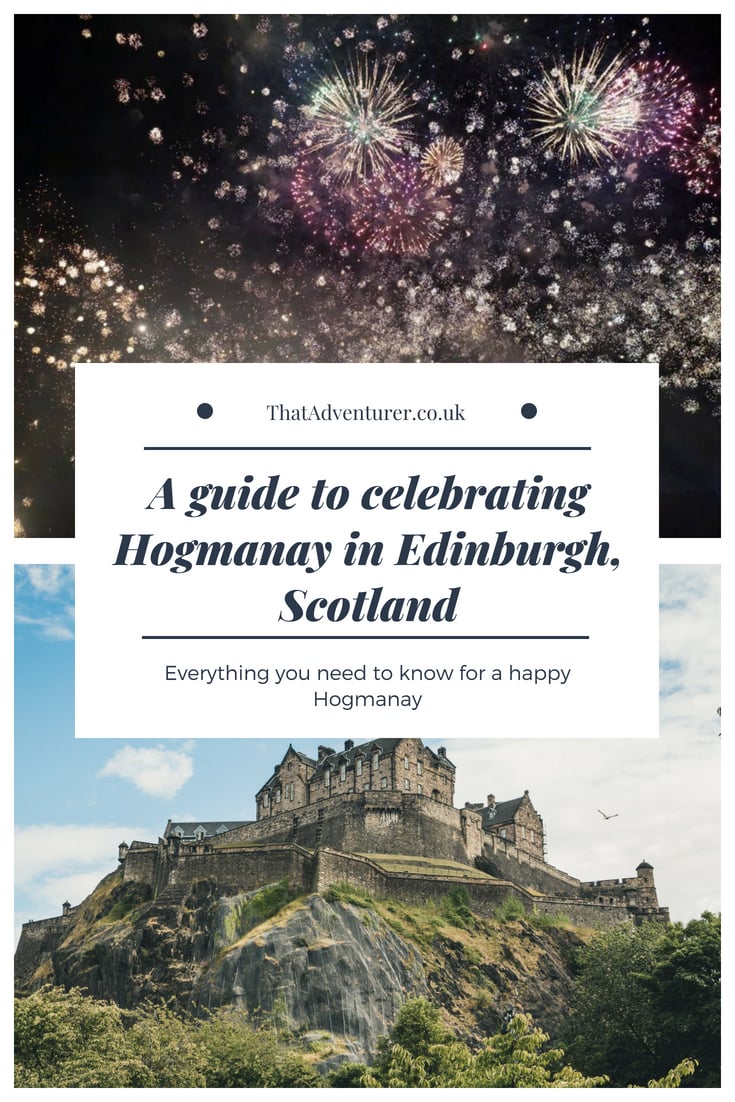 Considering I'm now only around an hours train journey away from Edinburgh I REALLY REALLY should go for New Years .. maybe this year will be the year - just need to get organised!

It SO much fun! xx