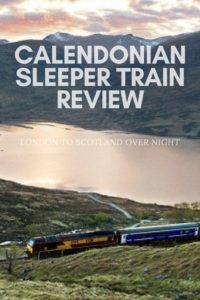 Sometimes the journey is as good as the destination. Such journeys rarely involve a plane, they’re more likely to be in the form of a road trip, boat trip or, more often, a memorable rail journey. This was one of those journeys. As I stood on the platform at Euston just before midnight, I was serenaded by bagpipes. It felt as though I was already in Scotland. The kilted bagpiper drew to a close to rounds of applauses as we boarded the Caledonian Sleeper train to Glasgow. I’d never caught the overnight train to Scotland before but I’m utterly convinced it’s the way to travel.

If you’re heading to Scotland for some adventure I highly recommend this Scotland to London train. Read my Caledonian Sleeper train review below train to find out why.

Catching the Caledonian Sleeper Train from London to Scotland

The journey to Scotland from the South of England can feel like a million miles. In reality our island is rather small and Scotland can be reached with a short overnight journey on the Caledonian Sleeper train, also known as the Scot Sleeper.

The Caledonian Sleeper has been whisking Londoners to Scotland whilst they sleep so they can wake up in Glasgow, Edinburgh or further afield in Fort William, for over 50 years. The Sleeper can sleep up to 500 people at full capacity and is the longest train in the UK!

Thanks to the Caledonian Sleeper you can take the train after work on a Friday and arrive early on Saturday morning ready for a whole host of adventures in Scotland before catching the train back on a Sunday evening ready for work on a Monday!

But what’s the Caledonian Sleeper like? Is it comfortable enough to get a good night’s sleep?

About the Caledonian Sleeper train 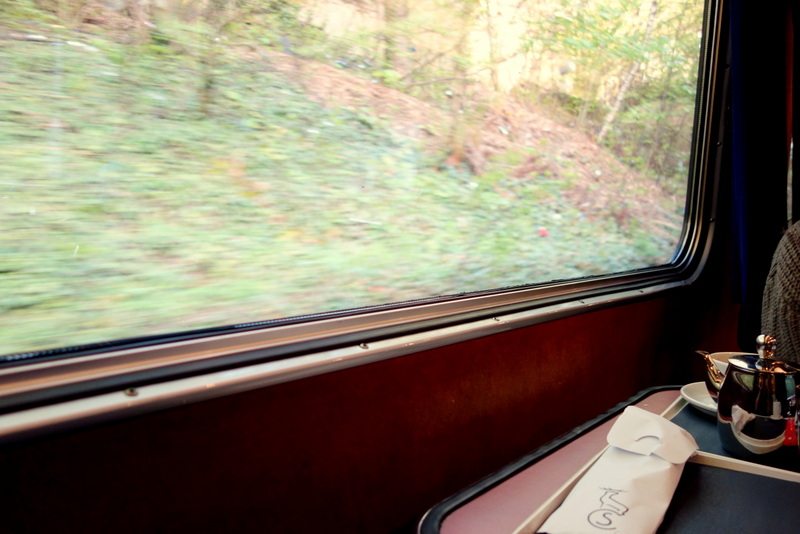 An iconic Scottish railway journey for all – from back-packers to business travellers – the Caledonian Sleeper train has been carrying passengers from London to Scotland for over 50 years.

The next few years will see some exciting developments as new owners, Serco, revive and revitalised the train and it’s carriages by introducing everything the modern traveller requires (mainly wifi!).

But why wait until then? The Caledonian Sleeper can still provide you with a fantastic and memorable journey to Scotland.

How often does the Caledonian Sleeper train run and where does it go?

Services run both ways six days a week, with the exception of Saturdays.

The Caledonian Sleeper route is from London to Scotland. The train service has several routes from Euston to various Scottish cities. You can get a London to Glasgow train (& Glasgow to London train), ride to Edinburgh, Inverness, and Aberdeen.

Where do you sleep on the Caledonian Sleeper Train to Scotland?

There are 3 options for travelling on the Caledonian Sleeper. You can choose between a Sleeper Seat, Standard Class and First Class.

This is the cheapest way to travel on the Caledonian Sleeper train.

The seats recline so you can get a slightly more comfortable night’s sleep but note that they don’t lie flat.

If you travel in the sleeper seats on the Caledonian Sleeper you’ll have access to a counter-service but can’t access the lounge and dining car.

All passengers with a sleeper seat ticket will be given a sleep kit which includes earplugs and an eye mask.

Prices start at about £35 per person each way.

The next comfort level up is the Standard Sleeper Room. With this option you get a bed and some privacy too since you can head to your room.

Sleeper rooms are good for 2 people and the beds are in bed bunk format. As with the sleeper seats, you’ll also get an eye mask and earplugs.

In addition to the bed you’ll also find a sink, towels, bedding and, new for 2018) 4 USB power outlets.

If you’re travelling on your own you will find you normally have to share with another passenger. This will be a passenger of the same sex.

There is no toilet in the room but toilets are available at the end of every carriage.

A cost of a ticket for these starts at roughly £70 per person.

If you’re travelling solo and really want your privacy then book yourself a First Class Sleeper Room. The First Class room means you get a whole cabin to yourself.

If’s basically the same cabin as the above but you just don’t have to share it. The top bunk will be folded away for the duration of your ride.

On top of the amenities given with the standard sleeper room, you will be given a toiletry kit, access to the first class lounges at the station and a free hot or continental breakfast. You can enjoy this breakfast either in your room with room service, or in the lounge car.

Passengers staying in the First Class sleeper room also get priority access to the lounge car on the train and free use of showers at departure and arrival stations.

If you’re travelling as a couple of with friend or family you can book rooms with an interconnecting door. This gives you quite a lot of space, especially for a train!

Prices starting at £130 per person.

Review of the first class cabins on the Caledonian Sleeper Train 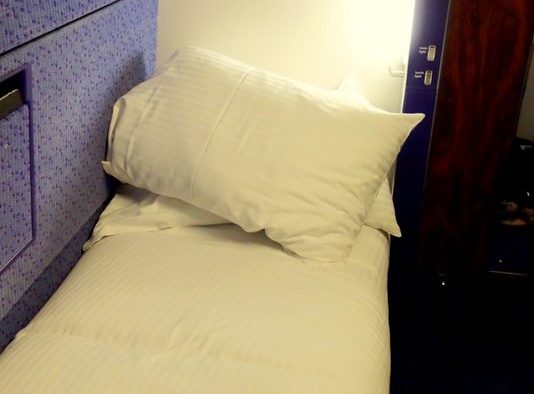 The First Class Cabins of the Caledonian Sleeper are for one person, giving you a little bit of extra room to move about in and worth paying a little extra if you’re travelling alone and would rather not share.

In the cabin you’ll find a wash-basin (it’s secretly hidden away and the counter can be lifted up to give you access), complimentary Arran Aromatics toiletries, a towel, a sleep pack. You’ll also get complimentary breakfast either in the Lounge Car or delivered straight to your cabin.

While the cabins are pretty small (as you’d expect), they have enough room to store your luggage and the beds are surprisingly comfortable. My head melted into the pillows (perhaps helped by the whisky from the Lounge Car) and I drifted off into a deep sleep with thanks to the pillow spray included in the sleep pack.

The only down side to the cabins as they are at the moment is that there’s nowhere to charge a phone. For anyone with a smartphone you’ll know your phone requires charging every evening so not being able to charge my phone while I slept on the Caledonian Sleeper was slightly annoying. However, there are power sockets in the Lounge Car so I was able to charge it up over breakfast and by 2018 the cabins are set to include power points.

Sleep quality on the Caledonian Sleeper

Whilst a night’s sleep on the train is never going to be perfect, I was surprised at how much I managed to sleep on the Caledonian Sleeper.

Whilst a little bumpy in places the train runs smoothly for the majority of the evening, I failed to even notice when the two trains were split to reach their separate destinations!

If you struggle to sleep due to noise or light then you needn’t worry. The sleep pack provided in First Class comes with an eye mask and earbuds to help you drift off into a deep sleep and dream of all the adventures to come! 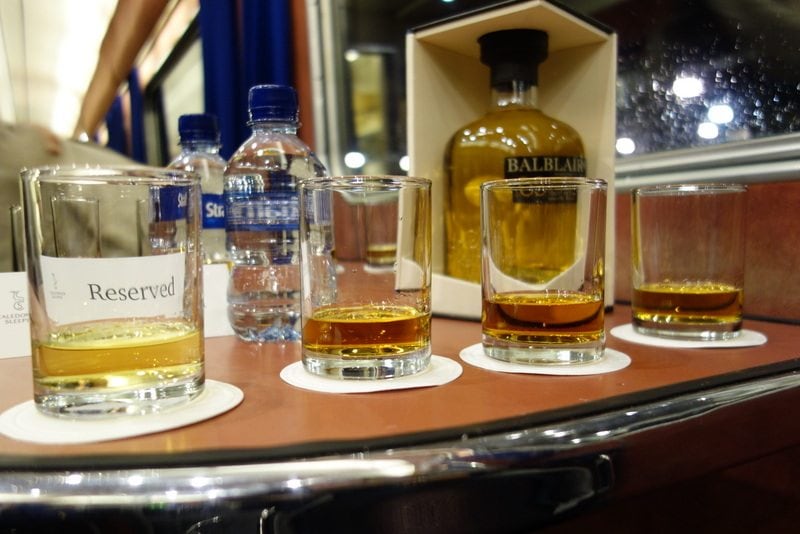 Aside from bringing the train up to a more modern age, Serco is also making the most of Scotland’s produce and have brought a new menu on board.

I’d already eaten by the time I boarded the Caledonian Sleeper, but the smells from the kitchen in the Lounge Car were incredible. Other travellers dined on Award-winning Cockburn’s Haggis, neeps and Docharty Tatties, and Clunes Lamb, new potato and mint casserole with spring greens. The Scottish cheeseboard for dessert looked particularly tasty!

If you’d rather a nightcap, there’s an impressive whisky list on board the Caledonian Sleeper train including whisky from Glenfiddich, Laphroig and an Old Pulteney.

There’s not much better than a bacon roll in the morning for a breakfast treat and the Sleeper’s chefs serve up a great Ayrshire bacon roll. You can also go all out with a hearty Highland breakfast (sausage, bacon, beans & scrambled eggs) or scrambled eggs and smoked salmon. Fancy keeping breakfast light? Opt for a creamy porridge or crunchy granola and yoghurt.

Caledonian Sleeper tickets range in price from £15.00 for a Standard Sleeper Seat to £95 for a First Class Sleeper Cabin (with a young person railcard), or from £24 to £140 without, leaving on Friday evening and returning Sunday night. Honestly, that’s not really any more expensive than your usual London to Scotland train fare.

You can book Caledonian Sleeper tickets up to a year in advance so cheaper tickets are probably available if you’re organised!

How long does it take to get to Scotland?

That depends on the route you take but the route I took from London to Glasgow, the “lowland sleeper” route takes about 8 hours. On this route, you leave London at about 11 pm and arrive around 7 am.

The sleeper train London to Edinburgh takes about 7.5 hours.

Is there WiFi on the Caledonian Sleeper?

With the new refurbishments to the Caledonian Sleeper, you can now get WiFi in your room as well as throughout the train on the sleeper train to London.

I’d definitely use the Caledonian Sleeper to travel to Scotland again. In fact, once we’re back in the UK I plan to take Thom to Scotland on the sleeper train to Edinburgh.

The bed was far comfier than expected, service friendly, food tasty and it looks like the upcoming improvements will only see facilities improve further.

For less than the price of a hotel you can travel quickly through England and up to Scotland all while you sleep allowing for a full day in Scotland to explore some of the brilliant moments it has to offer! 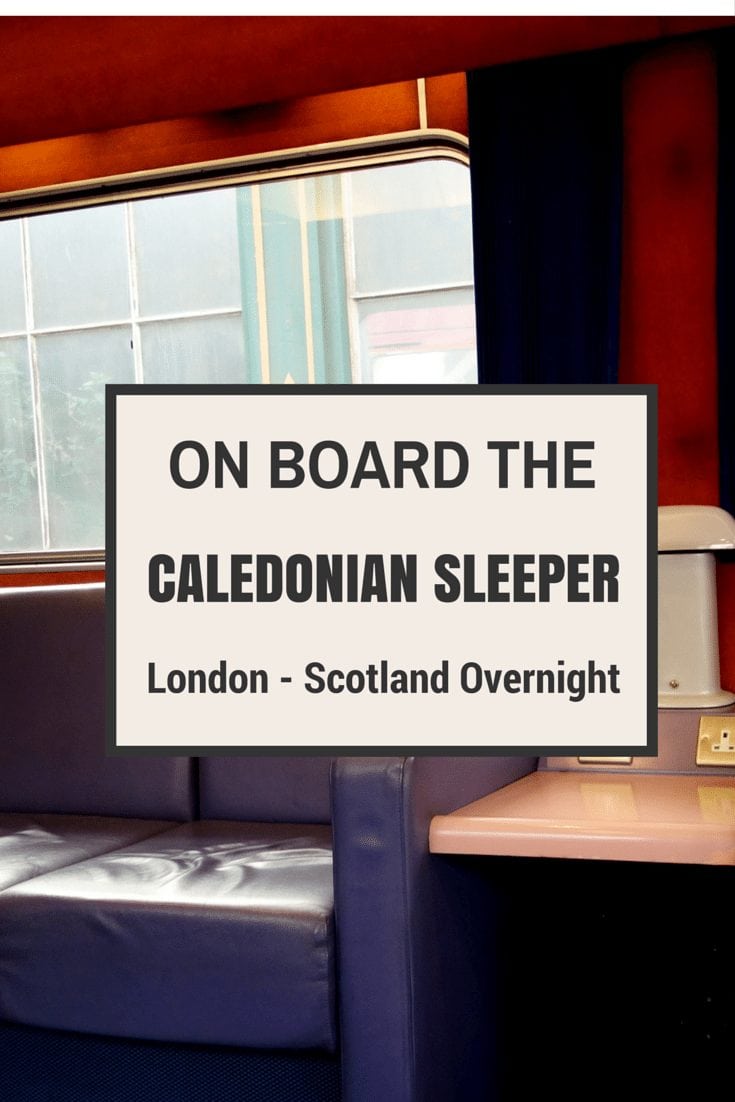 Hi how much would it be for 3children and 2adults thanks

Hi, I'm not sure about current prices. It would be best to check their website https://www.scotrail.co.uk/plan-your-journey/travel-connections/caledonian-sleeper

35 Best Train Journeys Across the World | That Adventurer

[…] The Caledonian Sleeper: Scotland’s Closer Than You Think UK […]

We had booked the Caledonian sleeper train for myself, husband and adult daughter as part of our UK trip. I love trains and they idea of a sleeper train and getting us to our London destination was a bucket list for me. It was pretty pricey, about $700 US dollars in comparison we could of flown for about $150 for the three of us. What a disappointment right from the start. We were greeted by what appeared as a drill sergeant who showed us to our berths. The train is very old and tired but the berths were clean. I booked a solo berth for each of us so that we would not be cramped with our travel bags and all. The "sergeant "told us not to put our stuff on the upper berth because they would then have to be cleaned. We later found no outlets in our berth and had to go to the lounge to "plug" in. Oh yea, by the way they had no food or beverage service available - which is not the norm but they had some problem. I highly recommend not spending your money on this mode of transportation!

Ever traveled by Indian railways? :D

I haven't yet. I would love to though can imagine it#s an incredible experience!