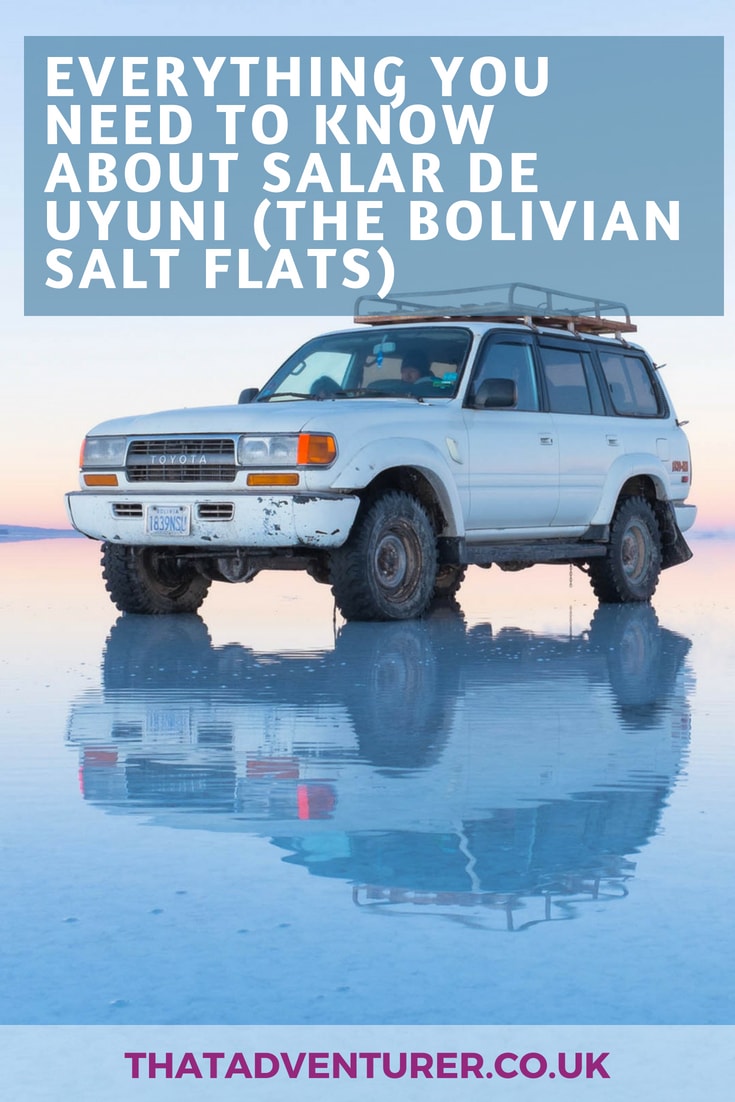 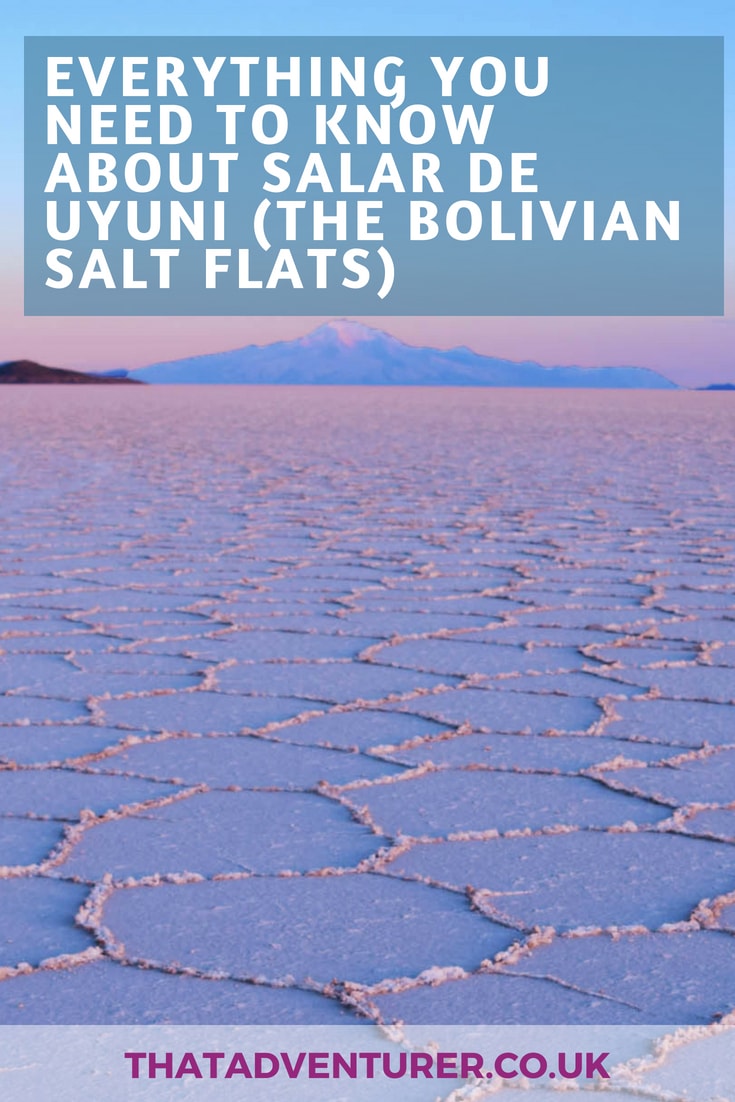 Salar de Uyuni is the largest salt flat in the world. A seemingly endless array of hexagonal tiles (created by the crystalline nature of the salt) create one of the world’s most unique landscapes. The Bolivian salt flats are 10,582 square kilometres (4,086 sq mi) and is one of the most popular stops on anyone’s South America itinerary.

Visiting the Salar de Uyuni is a once in a lifetime experience. It was something I knew I wanted to do long before I’d arrived in South America.

Despite the fact that the Salar de Uyuni is in a remote part of Bolivia’s Altiplano, there are plenty of visitors and tour companies here. You can take a one day trip, or a 3 day + trip.

You can also choose to start or end your tour in Chile which is great if you’re planning to visit Chile during your adventures in South America!

Guide to visiting the salt flats in Bolivia

Here’s everything you need to know about planning a trip to the Salt Flats in Bolivia.

Where are the Salar de Uyuni?

The Salar de Uyuni are in southwest Bolivia. They are reached from the town of Uyuni in Bolivia, or from Tupiza in Chile as part of a longer tour.

What is the Salar de Uyuni? 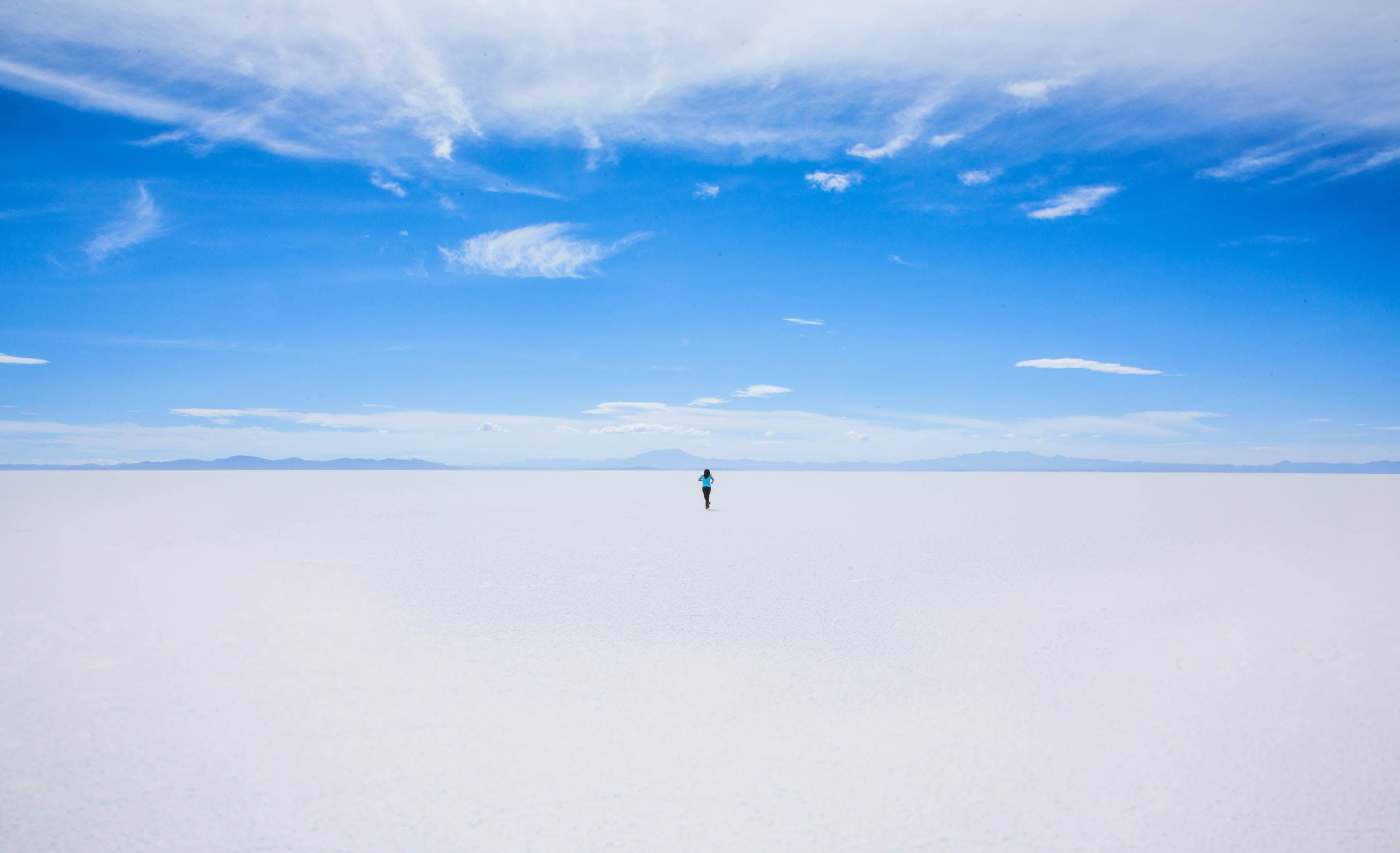 By now you’ll know that the Salar de Uyuni are the salt flats of Bolivia. It’s a huge expanse of salt (around 11 billion tonnes) and was formed when Lago Minchin dried up.

Surrounding the salt flats are other natural wonders such as volcanoes, hot springs (some of which you may visit on your tour) and snow-capped mountains.

How to see the Salar de Uyuni?

The best way to see the Bolivian salt flats is to take a guided 4WD tour. It’s possible to just do a day tour to the salt flats, but most trips run for 3 or 4 days and head deeper into the Altiplano.

The price of your tour should include; a driver, guide and cook (often one person), food, transport and accommodation.

What to expect on a tour of the Salar de Uyuni 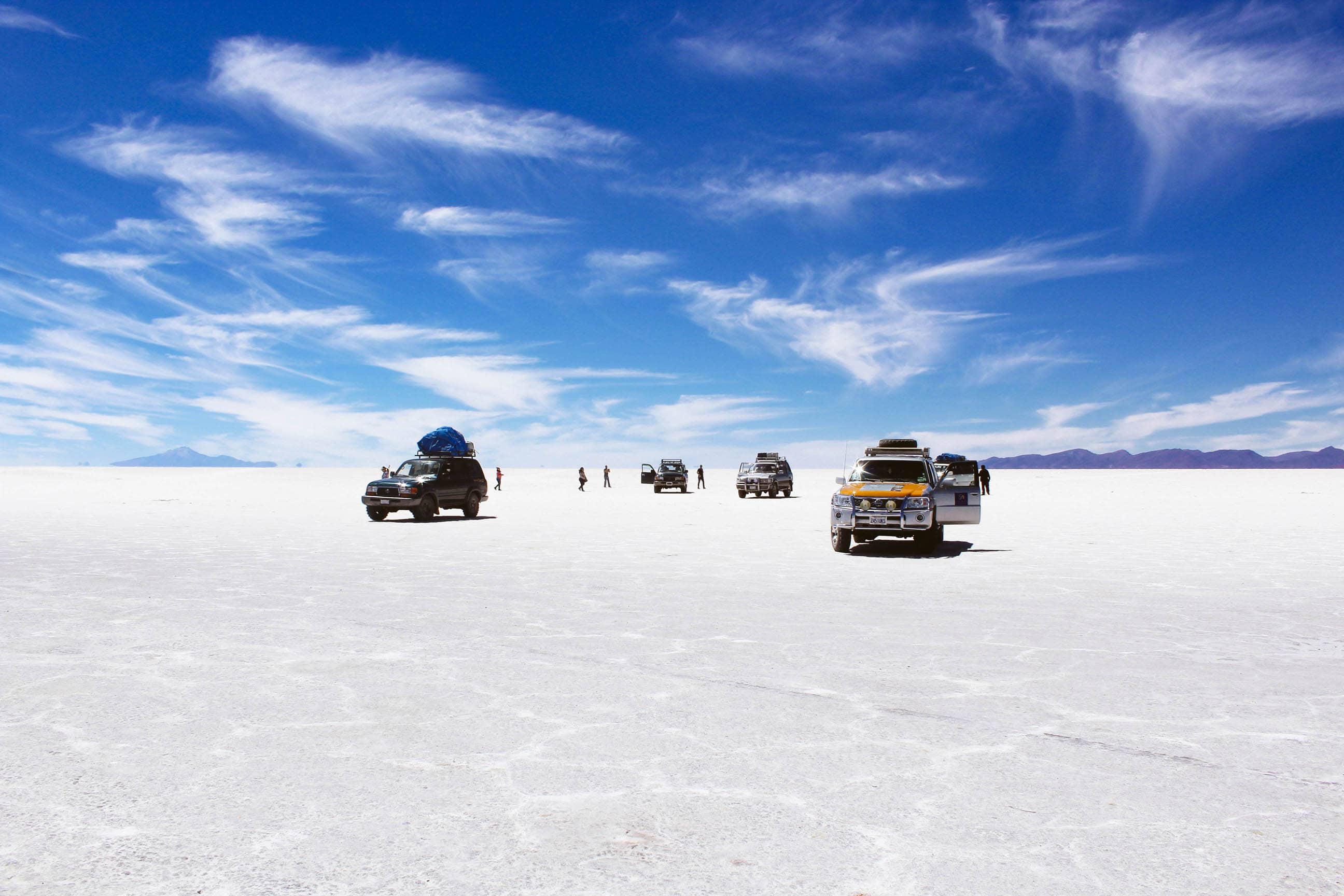 Most tours start and end in the Bolivian town of Uyuni. This is where we started and ended ours after a long, long bus journey from La Paz. However, you can also start and finish from Tupiza in Chile.

You’re spoilt for choice when it comes to tour companies. When you arrive in Uyuni by bus you’ll likely be swamped by people trying to push their tour company on you.

If you’ve left it until your arrival in Uyuni to book (like we did), take your time to choose and don’t be afraid to bargain. If you’re heading off on a tour that day you can probably get a much cheaper price as they’ll be keen to fill up the empty spaces.

Whilst there is a difference in quality of tour (i.e. english speakers, better accommodation, cars, food), you’ll all pretty much do the same thing.

Make sure you know what is and isn’t included, that your vehicle is equipped with seatbelts, emergency radio transmitters and a first aid kit, and that your guide and driver have the proper qualifications.

How to pick a tour of the Salar de Uyuni

It’s easy to be overwhelmed when you get off the bus and are hounded by tour companies. Here are a few things to ask that’ll help make your decision easier.

Recommended tours of the Salt Flats in Bolivia:

What to know before you go 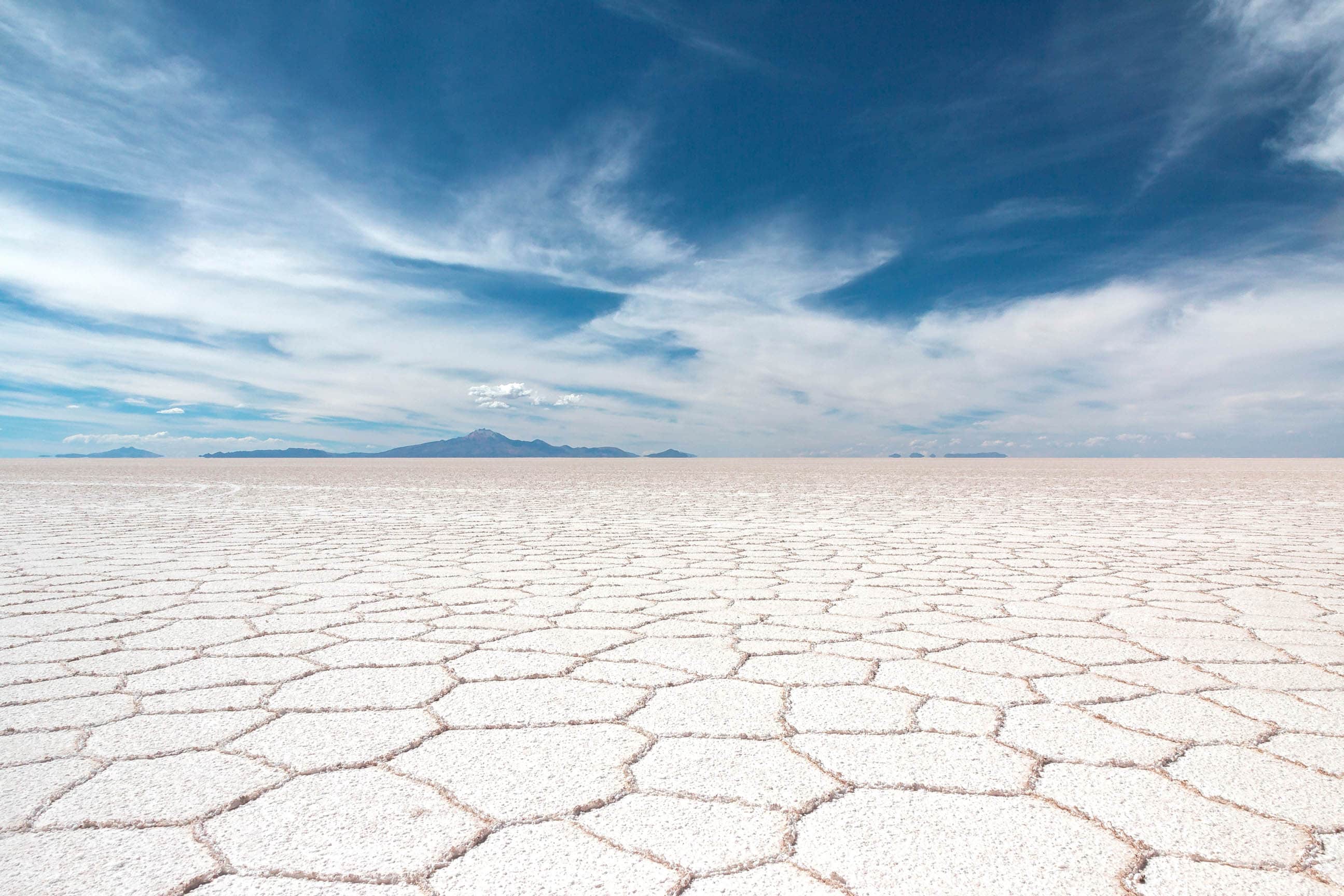 As with a lot of Bolivia, the salt flats are at a high altitude. They are 3,660m above sea level and altitude sickness is common at this height.

Make sure you’ve given yourselves a few days to acclimatise. You can help your body acclimatise by staying well hydrated and staying away from alcohol.

You can expect the day to be warm and sunny but you’ll be reaching for your jumper come nightfall. Temperatures sometimes drop below zero so you’ll want to bring plenty of layers as well as sunscreen and sunglasses to protect from the glare from the salt.

What will you see on a tour of the Bolivian salt flats?

If you’re doing a tour that begins and returns in Uyuni then your trip will probably take you past the following:

The ‘train cemetery’: Lots of old trains rusting away and a couple of random swings too.

How much is a Salar de Uyuni tour? 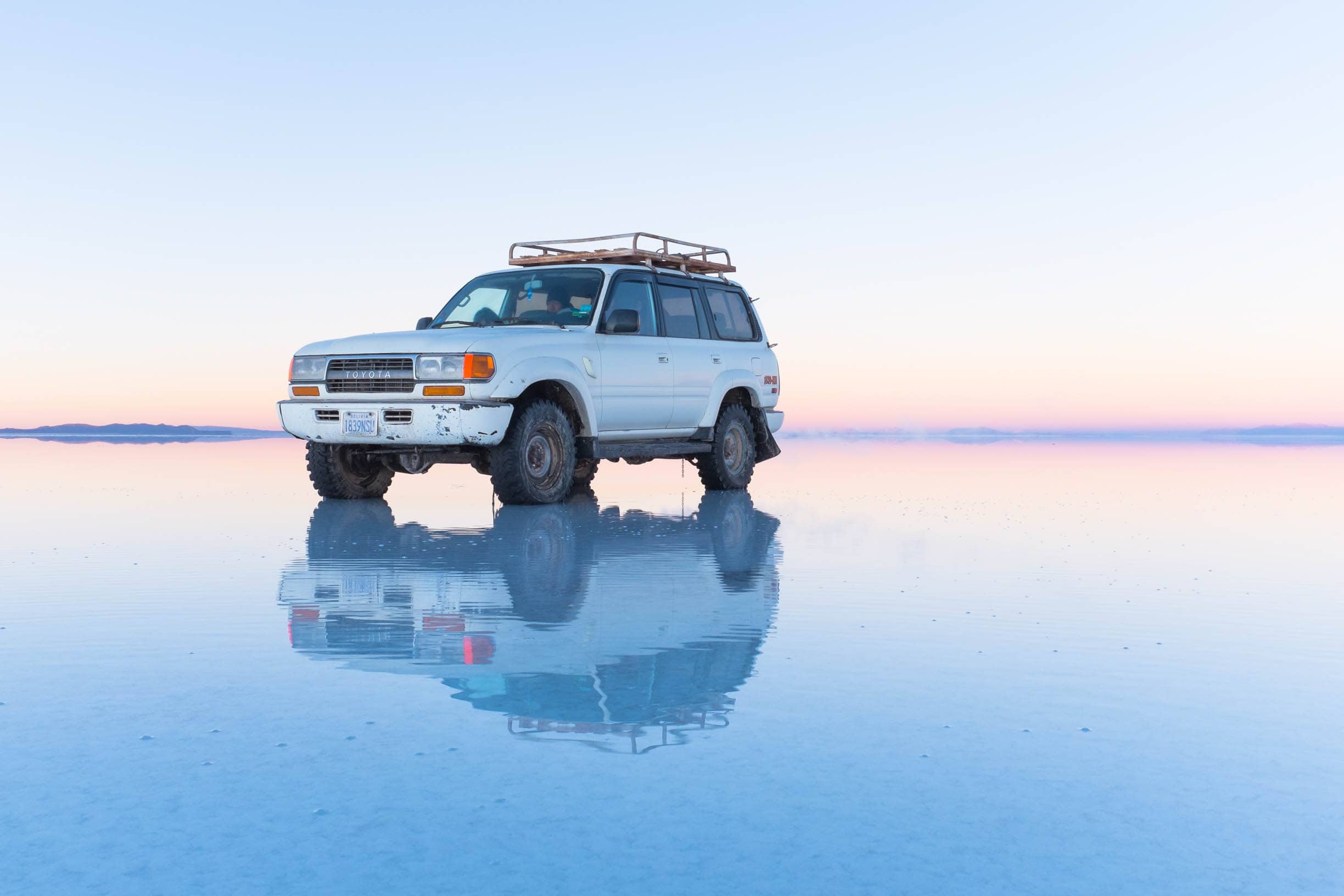 On top of this you may also have to pay an entrance fee to the salt flats. This is to be paid in Bolivianos at each attraction. Fees are roughly as below. Check with your tour company as to whether or not these are included.

What to pack for your trip to Salar de Uyuni

When to visit the Bolivian salt flats

This really depends what you want to see. If you want the flat, dry salt where you can easily see the hexagons in the ground then visit from May to November when the weather is dry and mild.

If you’re after the mirror effect then you’ll want to go in the wet season from January to April since the mirror is actually a puddle!

Another thing to consider is that sometimes the rain can stop you from seeing everything due to floods. 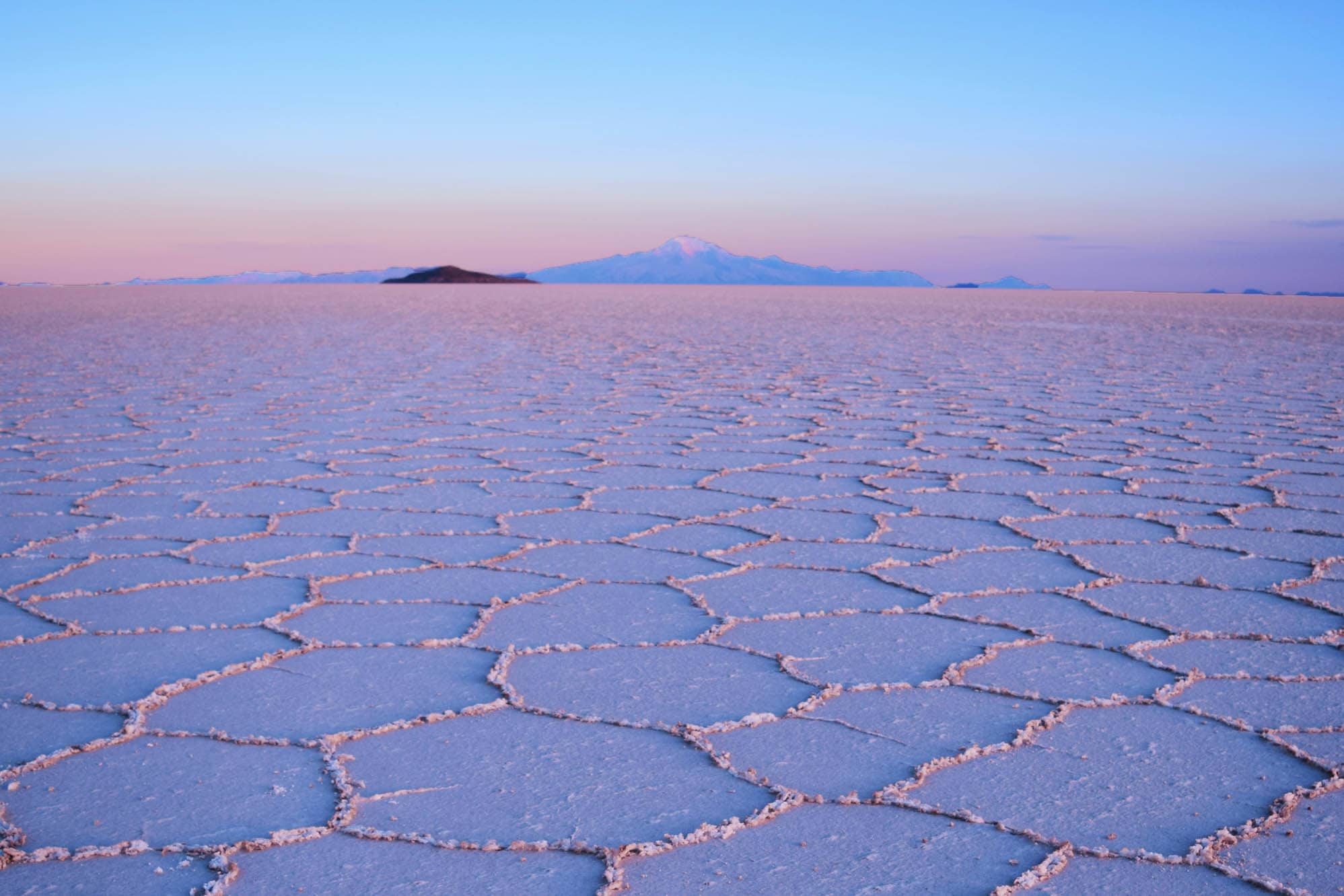 Due to the size of the salt flats and the way the white salt stretches on for miles, it’s easy to mess with perspective and get some super cool photos of people and objects. Think being chased by a dinosaur or picking up a tiny, tiny human.

Don’t miss out on the night sky in the Altiplano. It’s SO beautiful!

Think about the types of photos you want to get. If you want the mirror images then go in summer when it’s wetter. If you want blue skies go in winter!

How to get to Uyuni

If you’re on a budget, night buses run regularly from La Paz to Uyuni, but be prepared for a very bumpy and cold ride. The bus arrives around 8am, and most tours don’t leave Uyuni until mid-morning, so you should have enough time to grab a coffee and breakfast. Prices range from USD$14-$36 and comfort varies!

Buses also operate out of Potosi and Tupiza.