Given it’s proximity to the infamous Silicon Valley and all its billions of dollars, San Francisco isn’t a city which springs to mind when you think “budget travel”. But, like with most cities, there is plenty you can do and see on a budget. And, actually, a lot of the best things to do in San Francisco on a budget are also the city’s top sights. 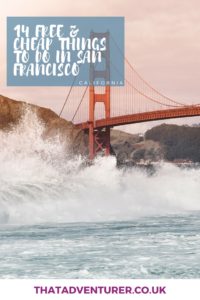 It took me a day or so to warm to San Francisco. When we pulled into the city on a Saturday evening I liked it. But, on the walk to dinner, some drunk/high guy slapped my arse, we saw a man walking around trouser & boxer-less and the waitress at the restaurant was so keen to turn over our table that she told us the dessert they served wasn’t worth waiting for to hurry us up

However, the following day we set about exploring the city and got to like it a lot more. Here’s how to fill your day with things to do in San Francisco on a budget!

Where to stay in San Francisco on a budget

Golden Gate Hotel: The Golden Gate Hotel is just 5 minutes’ walk from Union Square and the Theatre District. It’s pet-friendly and has wifi, reakfast and a complimentary afternoon tea for all guests. Book here.

San Remo Hotel: Located within walking distance of Fisherman’s Wharf, the San Remo hotel is furnished with Victorian heirlooms and historic photographs. Rooms have antiques inside making this one for history lovers. You’ll also find one of the country’s oldest Italian restaurants onsite, Fior d’Italia, which opened in 1886 and serves some great food! Book here.

USA Hostels San Francisco: Rated Most Popular San Francisco Hostel on Hostelworld, this hostel organises trips such as biking the Golden Gate Bridge, free city walking tours and weekly pub crawls. There’s loads of space to hang out and meet fellow travellers, a yoga room and a kitchen/dining area. Stay in a private pod in a dorm or in a private double room. Book here.

HI San Francisco Fisherman’s Wharf: This location has similar facilities including free breakfast and wifi but has the benefit of being closer to the water and Fisherman’s Wharf. Book here.

Best cheap things to do in San Francisco

Watch the sea lions at Pier 39 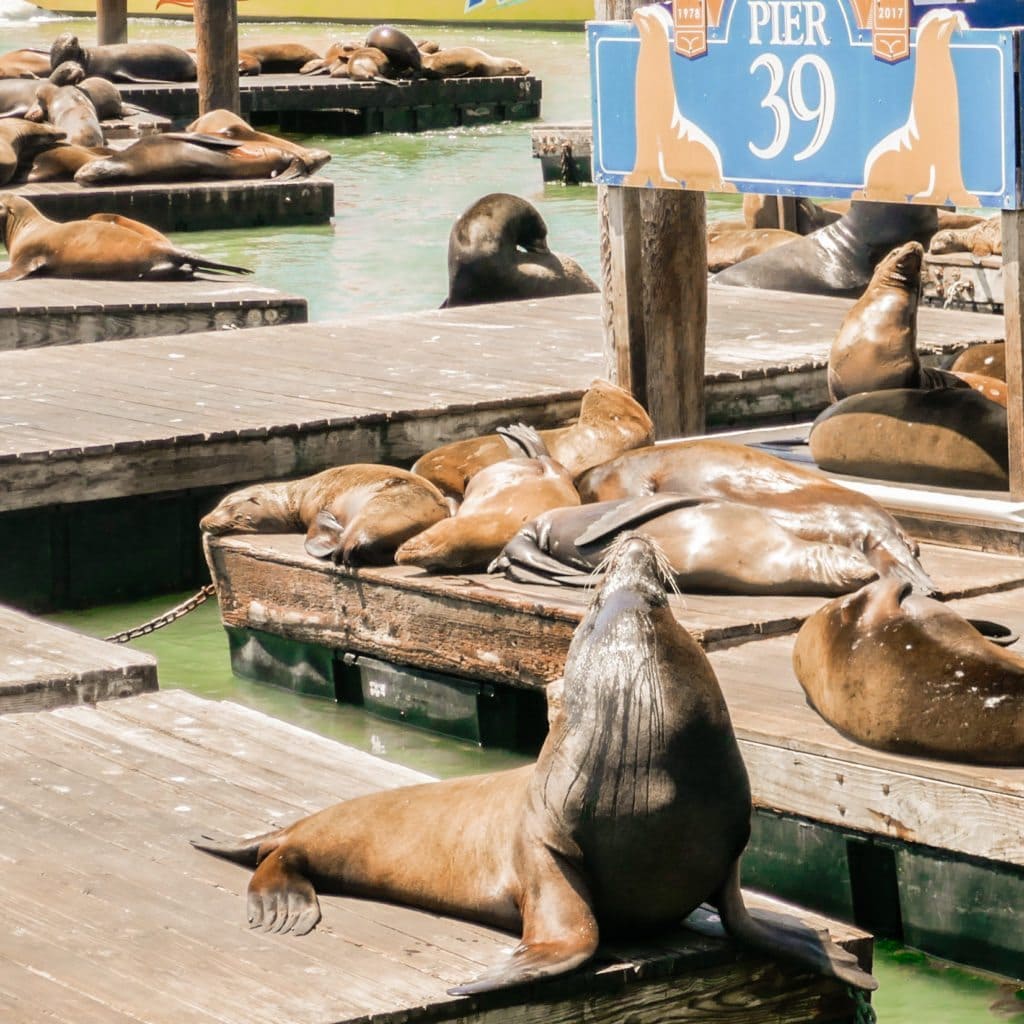 San Francisco’s sea lions are amongst the city’s most famous residents. After an earthquake in 1989 the sea lions moved into the pier and they’ve never really left. They seem to spend most of their day sleeping, barking and pushing each other off into the water.

They really smell, but it’s good fun to watch them and completely free!

Eat clam chowder by the seafront

You probably couldn’t get more touristy than this but clam chowder is good and it’s a fun thing to do. Grab a clam chowder in a bread bowl from one of the numerous stalls near the sea front (about $6) and enjoy. Watch out for the pesky sea gulls though – and please don’t feed them!

Take a hike by the Golden Gate Bridge 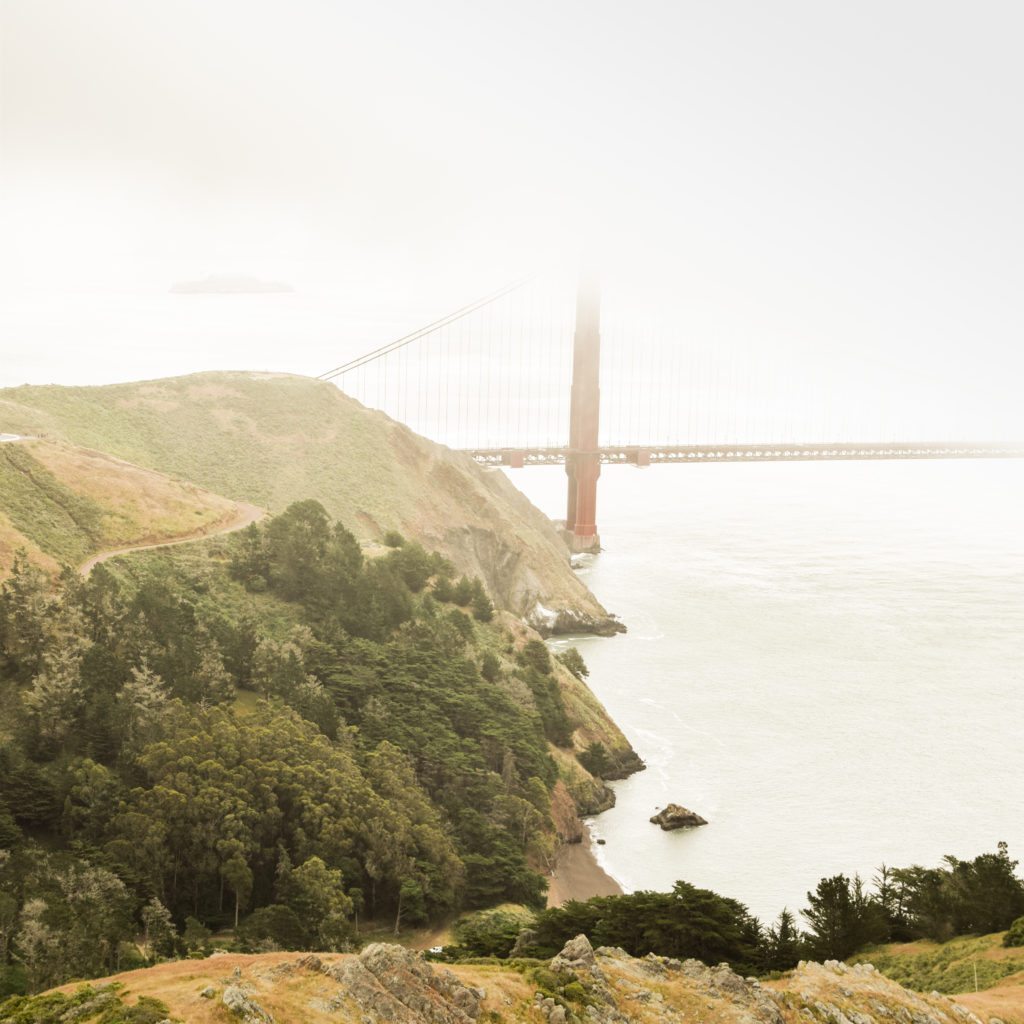 Or, head over the bridge to the north side and walk around Battery Spencer. Wherever you go you’ll get some great views of the Golden Gate Bridge, Alcatraz and the ocean.

If the sun’s out and the San Francisco wind isn’t too strong then take a picnic in the Golden Gate Park. It’s an absolutely massive park (1,00+ acres!) and great to explore one afternoon. There’s a carousel, an aquarium and a Japanese Tea Garden too!

Walk, run, drive or cycle over the Golden Gate Bridge

TOP TIP: It’s free to drive over the Bridge if you’re leaving San Francisco, but if you’re driving in towards the city you’ll have to pay the toll fare.

Even better, it’s free to walk, run or cycle over the bridge and that way you’ll actually get to take in the views and the bridge itself.

No matter how many pictures you’ve seen of the bridge, it’s still pretty impressive to see in person. I’ve heard it’s shrouded in fog most of the time so I think we got pretty lucky with the weather! 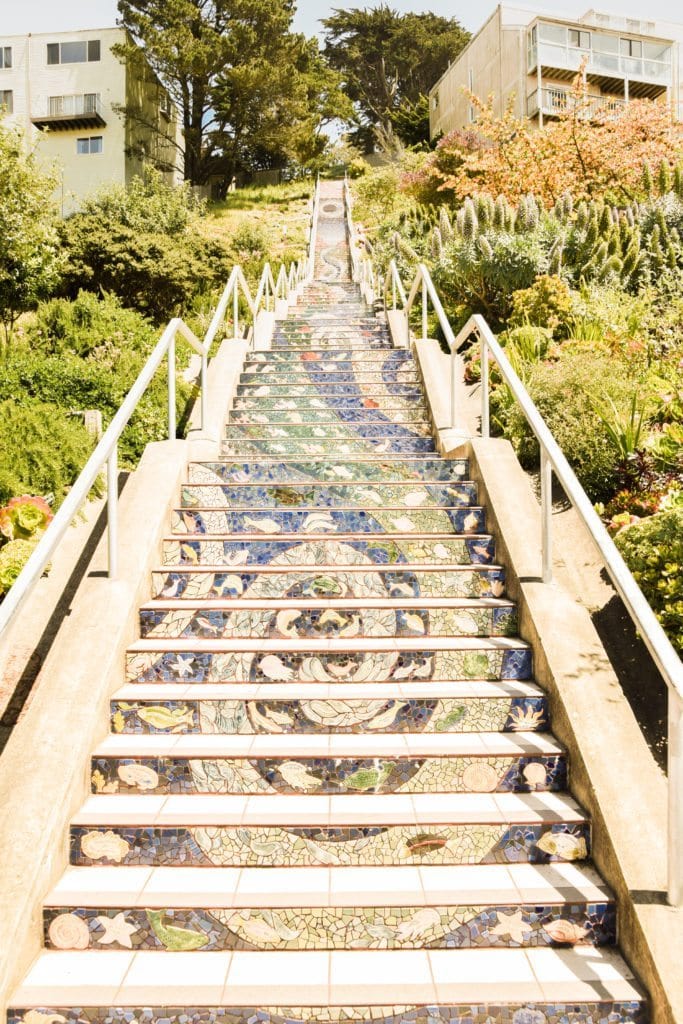 These steps are a bit of a hidden gem – at least to most San Francisco visitors. The 163 steps have been decorated in beautiful, coloured mosaic tiles. At the top there’s even a park you can relax in (after having climbed a few more, less colourful steps!). From the park you’ll also see a tiny part of the Golden Gate Bridge poking up behind the Golden Gate Park.

Browse the shops on Haight Street

Haight Street is pretty unique and is packed full of quirky shops. One of the best, and more well known ones, is Amoeba Music. Amoeba Music is an absolutely massive shop packed full of CDs, vinyls, DVDs, videos(!) and posters. It’s like HMV on steroids (and before it got rubbish). It’s well worth browsing. 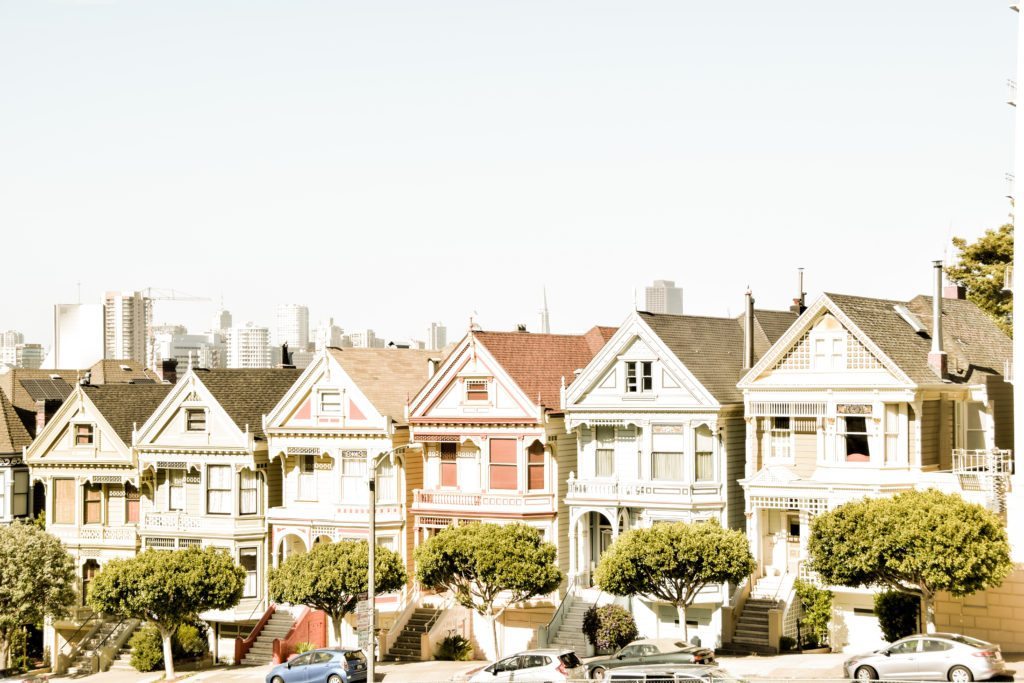 Personally, I think these are massively overrated. I’m going to add them to the list anyway because I think they’re just one of those things you have to see in San Francisco. They were refurbing the park when we were there, so our view of the houses wasn’t the best. Still, the Ladies didn’t seem that impressive compared to the other houses around them which I thought were much prettier.

On our first evening, we took a stroll down Valencia Street in The Mission District. It’s full of bars, cafes, restaurants and a couple of bookshops too. I love a good bookshop and upon entering Dog Eared Books is a very good bookshop. It’s full of the book on all types of genres including start-up and techie books. What more would you expect from a bookshop so close to Silicon Valley?

The Mission district in San Francisco can be a little bit dodgy but it’s also one of the cooler areas to visit – maybe just don’t go in the early hours of the morning, or late at night. It’s the hipster areas of San Francisco so if that’s your kind of thing then head here. 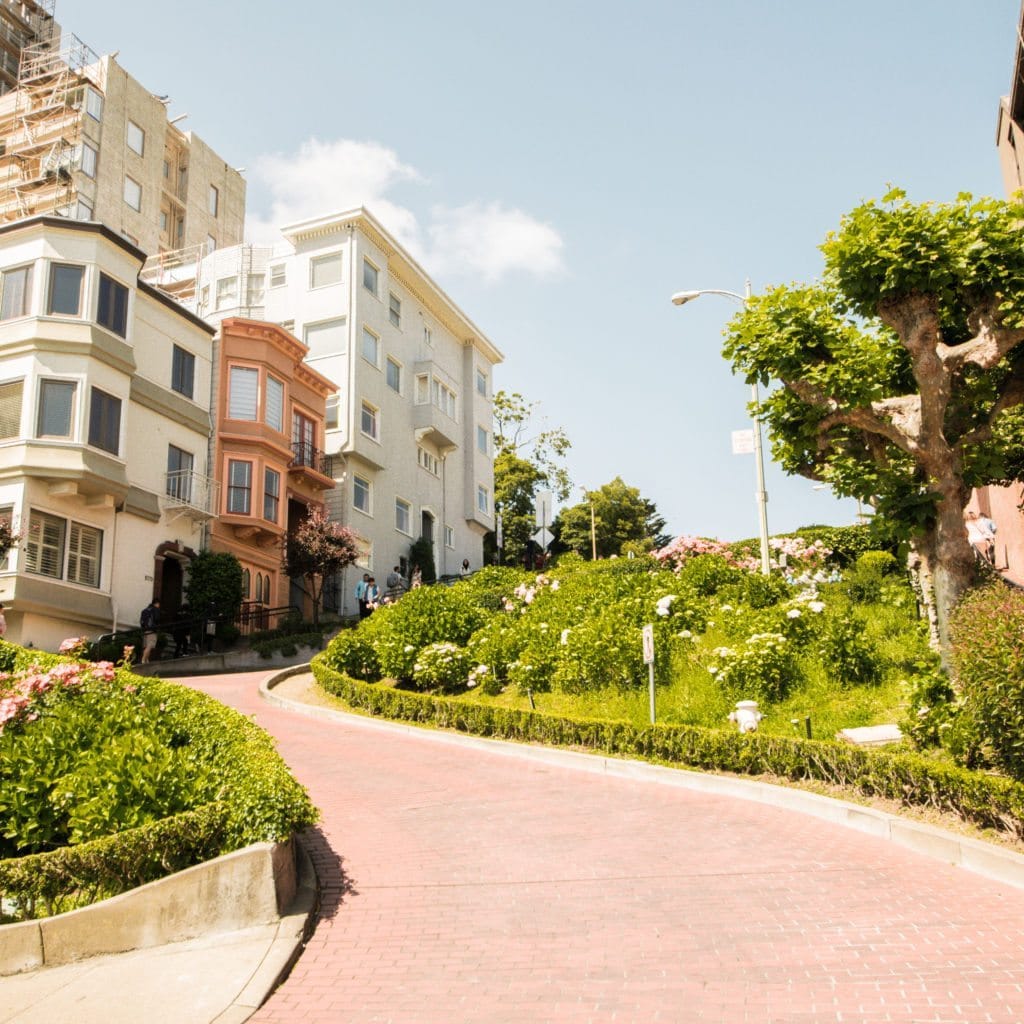 Another San Francisco classic is Lombard Street. You may know it as the super steep, twisty road. It’s super busy whatever time of day you visit and I can’t imagine what it’s like to actually live on that road. If you’ve got a car you can still drive down the road yourself if you really want to.

Get fresh produce at the Ferry Building Market Place

We weren’t in San Francisco at the right time for the marketplace to be open but I’ve heard it’s supposed to be great. You can get all sorts of fresh foods and great coffee at the market and then enjoy them along the waterfront.

California is known for its redwood trees but they’re only really in the north of the state. If you’re only in San Francisco for a short amount of time and still want to see some traditional Californian Red Woods then head to Muir Woods National Monument. It’s under an hour away from the city and it has plenty of trails and huge redwoods for you to explore.

It does get really, really busy though so go first thing in the morning if you want to get a parking space!

Want more things to do in California?

Thanks for sharing this! Saving it for our San Fran trip next year!

I haven't been to SF for YEARS, but John goes often for work! If we ever moved back to the States, we'd head there, as it's not too far of a flight to my parents in Seattle, and it's a great city! Will bookmark your guide for when I go again.

haha! I think the weather was pretty good most of the time we were there, wasn't TOO windy on the bridge but I can imagine it does get pretty strong!