There’s also a section at the end of the post about where to find other redwood forests if you’re staying in San Francisco. 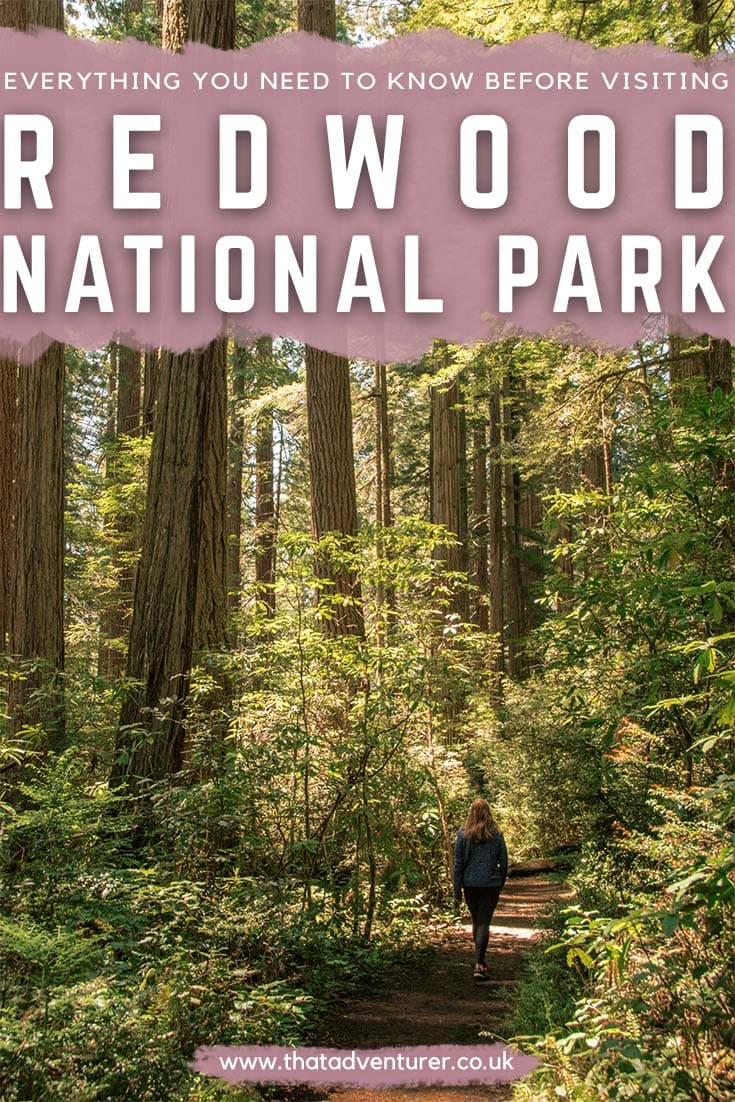 Redwood National Park is renowned for being home to some of the tallest trees in the world. But the park isn’t just about trees, there are also prairies, oak woodlands, rivers and around 40 miles of coastline.

You can’t fail to be impressed by the size of the redwoods in both height and number but what’s more surprising (and saddening) is that it’s said only about 5% of the redwood forest, California remains. On a more positive note, the park leads the world in restoration efforts helping to keep the largest redwood trees growing and thriving!

Redwood trees are amazing. They’re believed to have been on earth since 240 million years and can grow to 300 ft (91m) or more! It’s easy to see why they’re often referred to as ‘giant redwoods’ in California. But it’s not only their height that is impressive, it’s also their age. Along the coast, you may see redwoods that have been living for over 2000 years!

Wondering “what is redwood?” It’s a subfamily of coniferous trees that grow commonly on the coast which is while you’ll find them along the northern California coast from Big Sur and there is also some redwood forest in Oregon.

The coastal California redwoods only grow in the Pacific North West so you’ll have to visit this part of the world if you’re looking to see some!

The oldest tree in Redwood National Park is believed to be somewhere between 1,900 – 2,200 years old! It’s named the Grizzly Giant and can be found in Mariposa Grove. 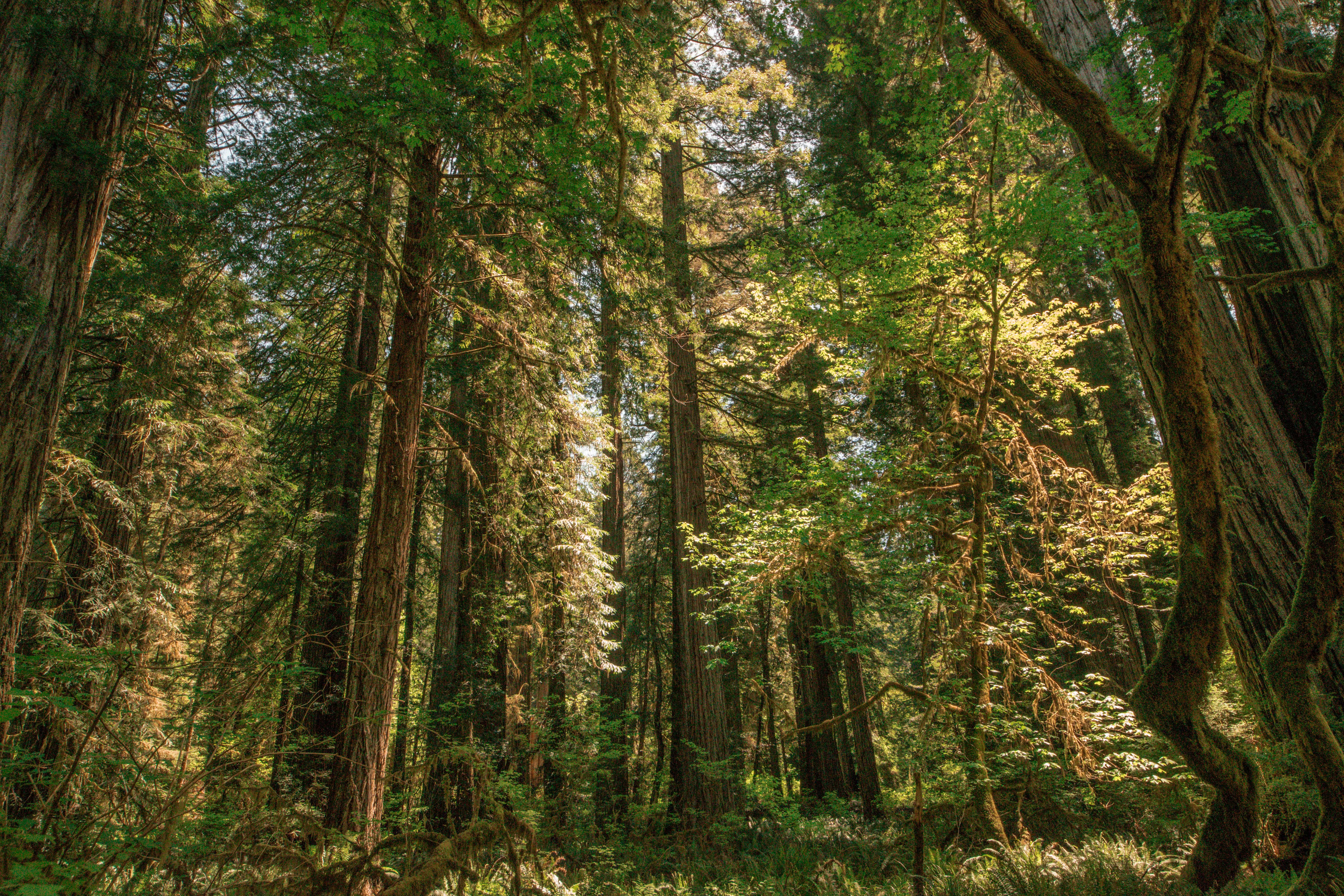 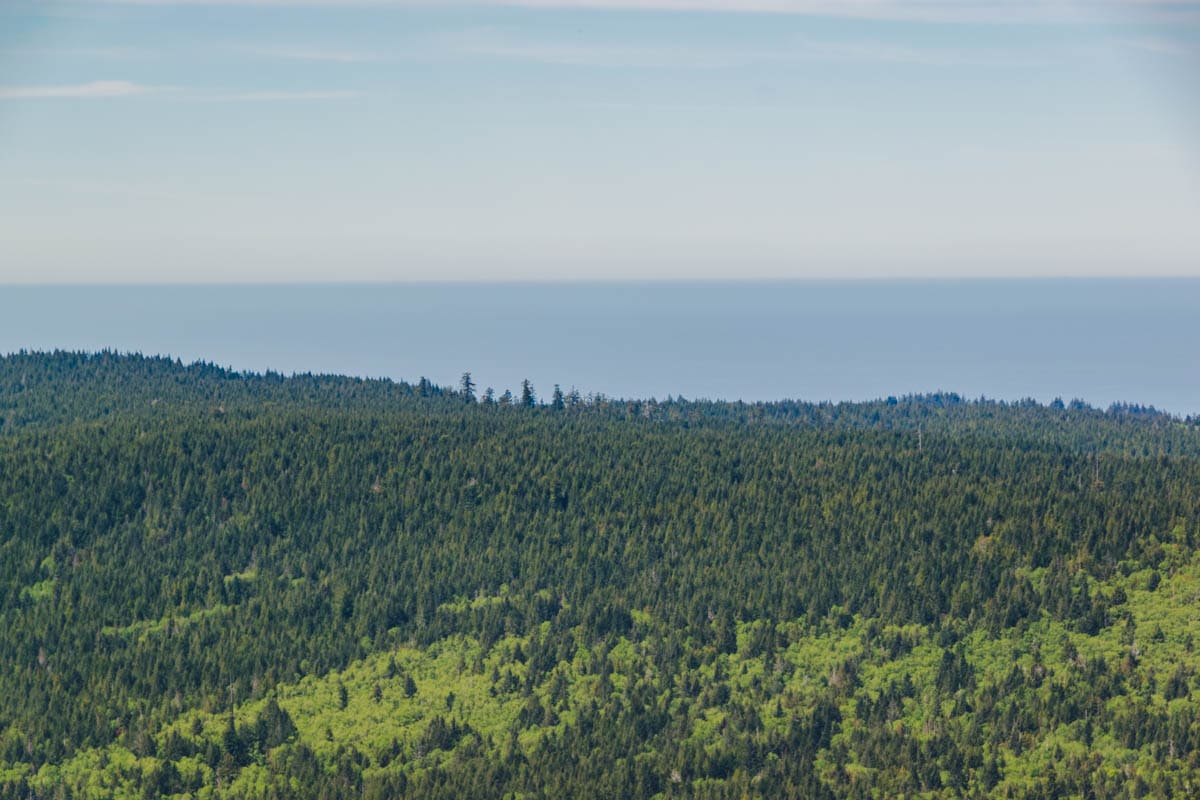 Where is Redwood National Park located?

If you’re wondering, like I was when we were driving through this part of the US, “where is the Redwood forest?” then there’s are multiple answers. There are some redwood forests near San Francisco, but the Redwood National Park area is in northern California along the coastline. It’s about 1.5 hour’s drive from the Oregon-California border. Roughly 6 hours from Redwood National Park to San Francisco and almost 7 hours from Portland in Oregon. 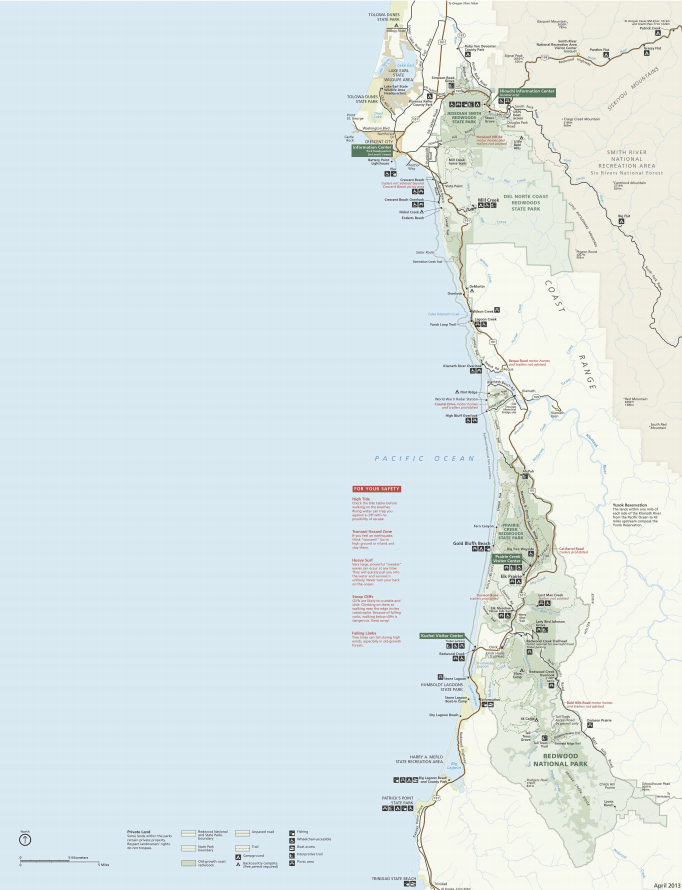 You can see a complete list of the Redwood Park map here from the National Parks Service.

If you’re going hiking to find even more giant redwood trees you’ll need a Redwoods trail map as there’s limited signal within the park and the trails can be confusing. I recommend this one. 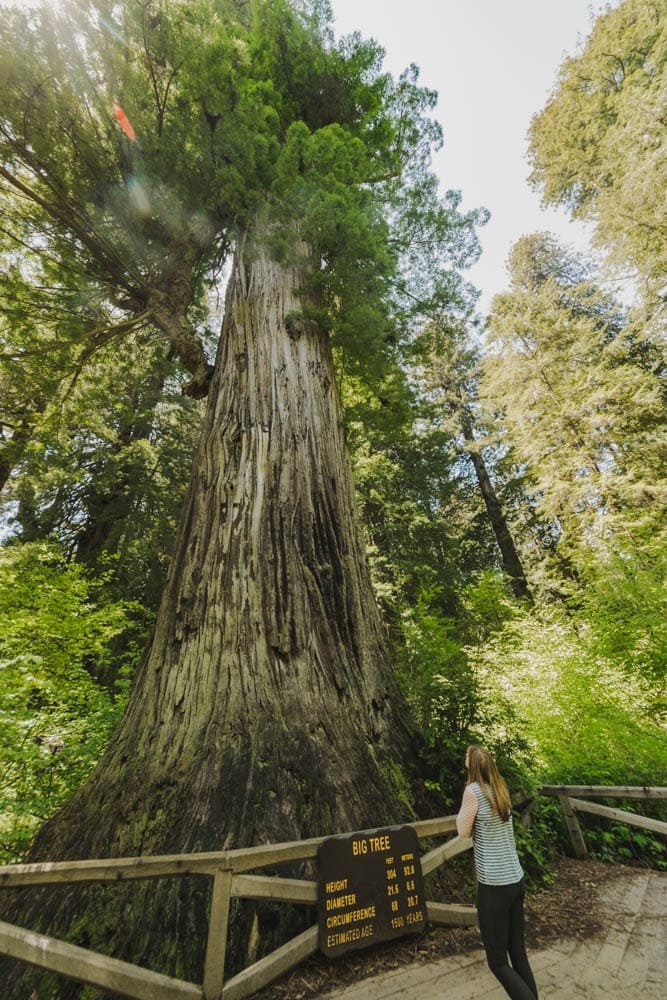 How to get to Redwood National Park

Getting there by car is easiest, and usually the cheapest. The other benefit of taking the car is that whichever direction you come from, you’re treated to amazing views along the coast and plenty of redwood roadside attractions too.

If you are visiting California on vacation and need to rent a car, I highly recommend checking out RentalCars.com who make it super easy to compare prices so you get the best deal.

The closest domestic airports to Redwood National Park are Crescent City Airport which is served by United Express Airlines and Eureka-Arcata airport served by Horizon Air.

If you have dates in mind then I recommend checking out Skyscanner.com to compare your cheap flights! Or, if you’ve yet to choose your dates then take a look at Dollar Flight Club, once signed up you can set your home airport(s) and then they’ll let you know when they find amazing deals on flights. The savings they find every day AMAZE me! Dollar Flight Club has also introduced deals for internal flights in the US so it’s even better now! 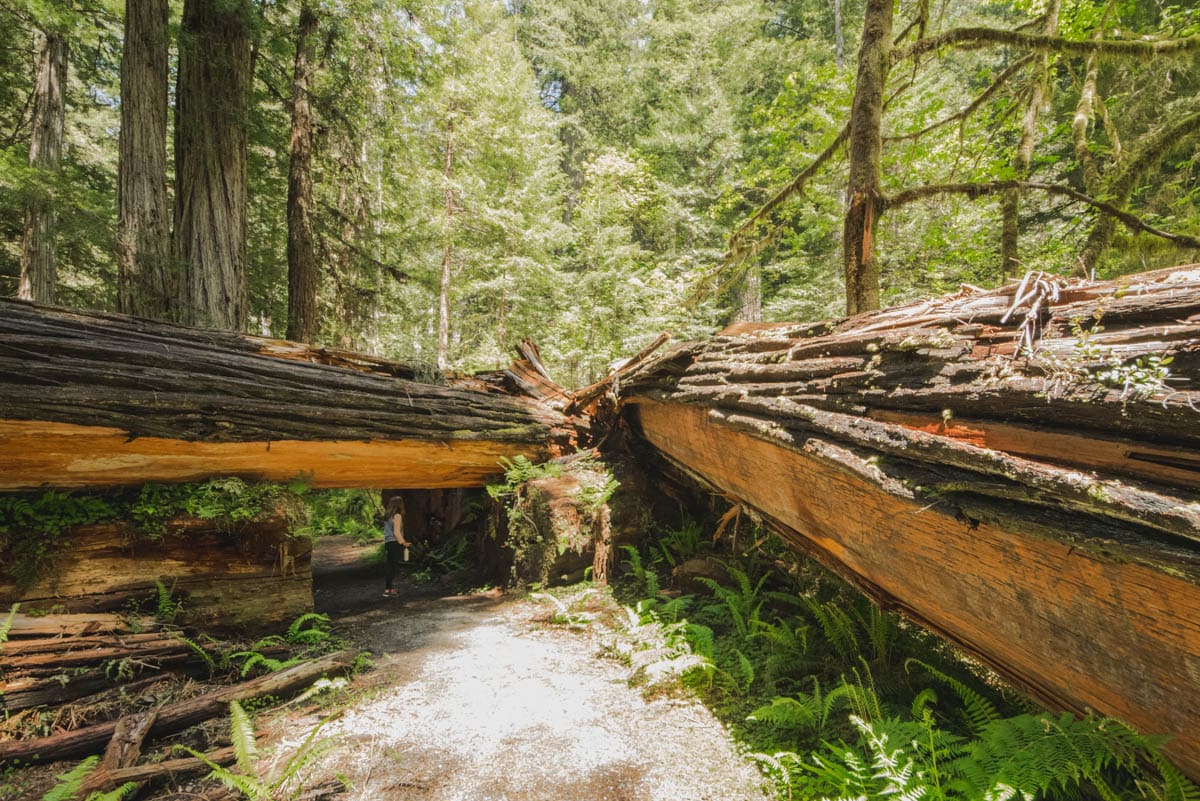 The journey from Portland, Oregon to Redwood National Park is around 370 miles along the I -5. However, if you’ve got some time I strongly recommend driving along the Oregon Coast.

It’s one part of our three-month American road trip that Thom and I talk about all the time. It was such a surprise and it’s incredibly beautiful!

If you’re wondering how far is Redwood Forest from San Francisco (assuming you’re talking about the national park), it’s about a 300-mile drive on highway 101. It’s slightly longer if you take the slower, but more picturesque highway 1 which goes directly along the coast. 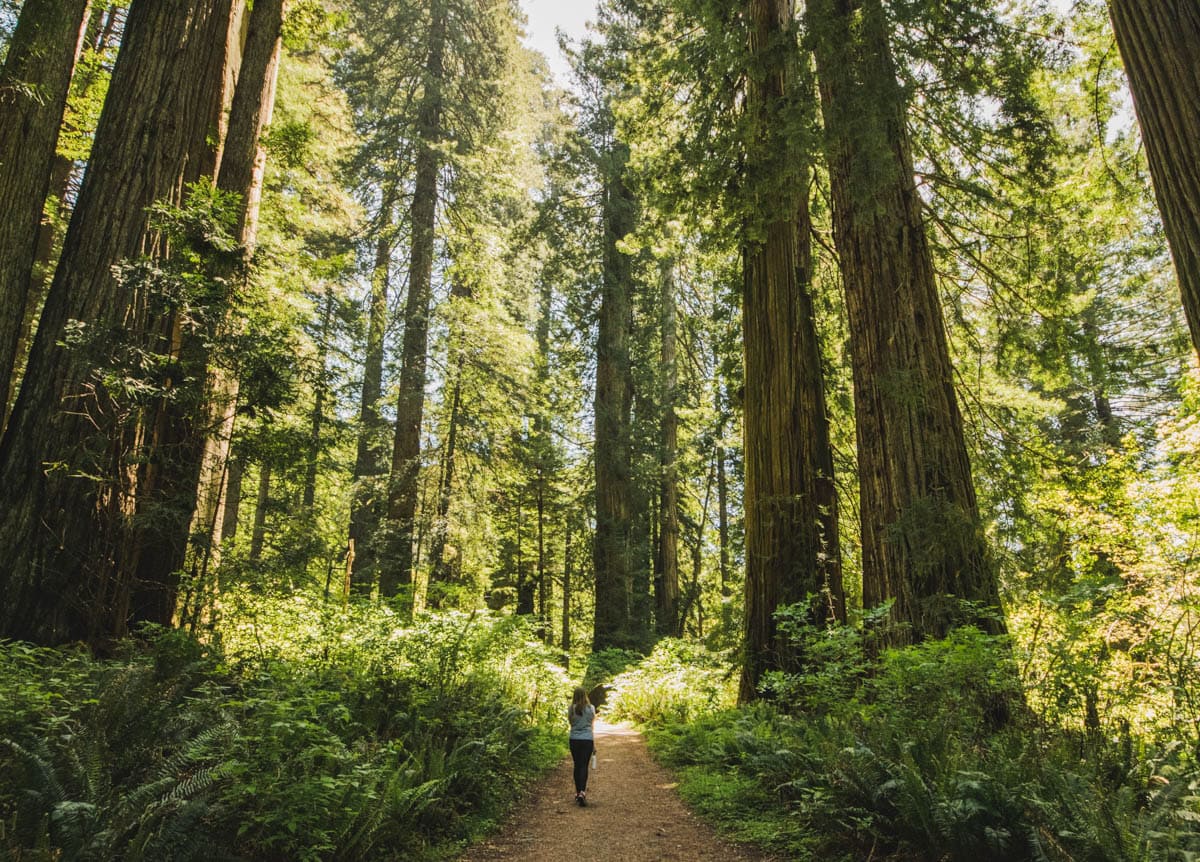 Planning for a Redwoods National Park trip means you’ll have to think about the following fees, permits and passes.

Redwood National and State Parks are fee free with the exception of day use areas within the Prairie Creek Redwoods, Del Norte Coast Redwoods, and Jedediah Smith Redwoods State Parks.

Fern Canyon is within a day use area and requires paying a day use fee of $8 per car or showing a federal pass such as the America is Beautiful Parks Pass.

While Redwood National Park is free, if you’re planning on visiting a few US National Parks over the course of a year then consider buying the “America is Beautiful National Parks Pass. It’s valid for a whole year and gets you entry into hundreds of National Parks, State Parks and historic and national monuments too.

If you want to stay in Redwood National Park then it’ll have to be in one of the Redwood National Park campgrounds. There aren’t any hotels or lodges inside the park. What you do have a choice of is whether to stay in a developed campground in Redwoods, CA or in a backcountry campsite. Camping within the park is one of the best ways to enjoy these beautiful northern California redwoods!

Camping in a campsite costs $35 per night. There are also some Redwood National Park cabins at the Jedediah Smith and Elk Prairie campgrounds.

You must reserve in advance (at least 3 months), especially in the summer as redwood forest camping is very popular!

You can learn more about the campsites in Redwood National Park here.

There are more than 322km of backcountry trails and seven designated backcountry campsites and spending a night in the backcountry can be great fun if you’re well prepared! Backcountry exploration can lead to some of the best camping in Redwood National Park!

For visitors to Redwoods National Park looking to stay overnight in the backcountry, you’ll need to get a backcountry permit. These are free and are issued in-person up to 24 hours in advance of your trip.

Take a look at the backcountry trip planner to decide what would work best for you and then head to the Hiouchi or Kuchel Red Wood National Park Visitor Centres to get your permit. Permits are limited and are issued on a first-come, first served basis. 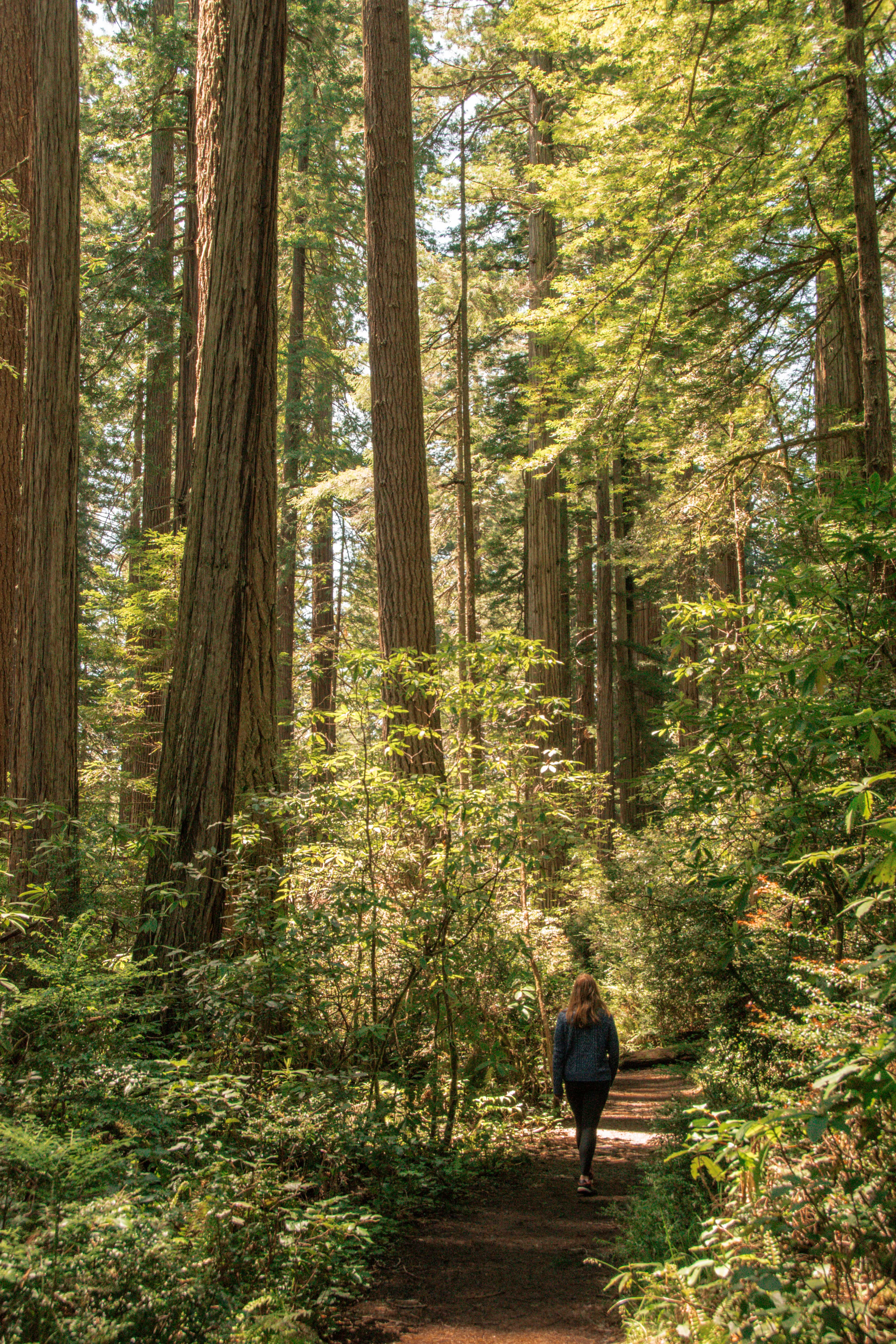 Top 5 things to do in Redwood National Park

Add these top things to do in Redwood National Park to your Redwood travel itinerary!

There isn’t a redwood drive in tree within the Redwood National Park boundaries. However, if you’re driving the California coastal road you’ll find plenty of strange roadside attractions like this In Klamath, less than an hour north of Redwood National Park, you’ll find the Klamath tour-thru tree and there’s also the Chandelier drive through tree south of the parks.

5 of the best Redwood hikes

If you love hiking then be sure to check out these best hikes in Redwood National Park. 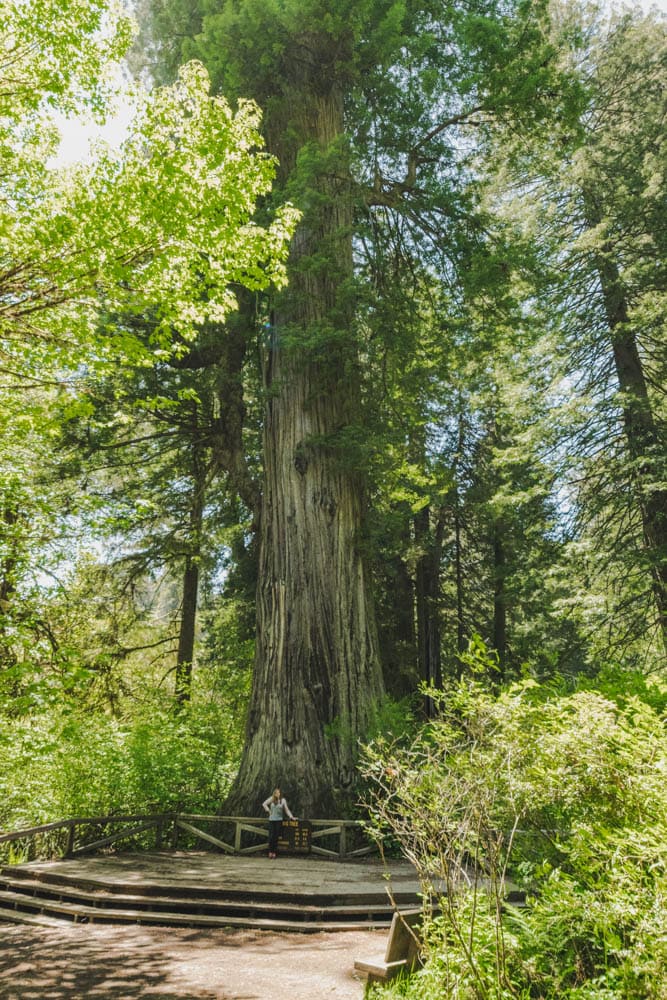 Where to stay near Redwood National Park

There’s a lot more choice when it comes to campgrounds near Redwood National Park.

We camped in our van in the small town of Klamath just north of Redwood National Park. The town is full of RV parks including Klamath River RV Park, Golden Bear RV Park, Blackberry RV Park and Redwood RV Park. 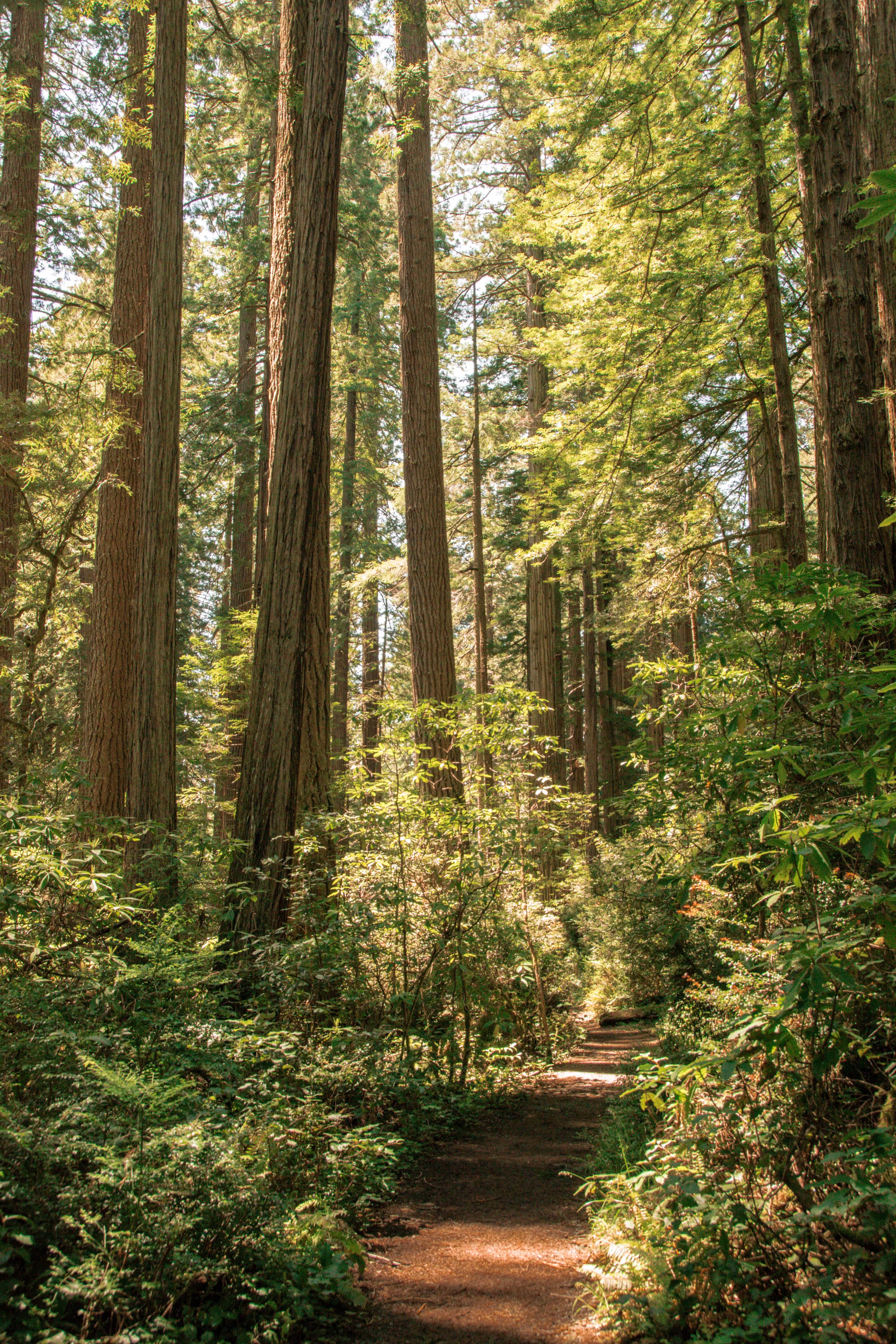 Where to see Redwood forest near San Francisco

If you’re looking for options for where to see redwoods in California that are closer to San Francisco, here are a few places.

Big Basin Redwoods State Park is just 65 miles (105km) south of San Francisco. It’s the oldest state park in California and has around 80 miles (128km) of trails that go through a coastal redwood forest. It also has a unique feature in that there are a number of waterfalls that can be found there.

Henry Cowell Redwoods State Park is just southeast of Big Basin and is a great option for a redwoods vacation from San Francisco. You can see some truly great redwoods here on the Redwood Grove trail which weaves through old-growth redwoods. There’s the option to take a guided walk most weekends too.

In the middle of wine country in Mendocino County is Hendy Woods State Park. Being a bit further from the coast, you’ll likely notice that this park is a lot warmer and less foggy than the other California redwood parks. If wine tasting is part of your California itinerary then stopping here is very worthwhile.