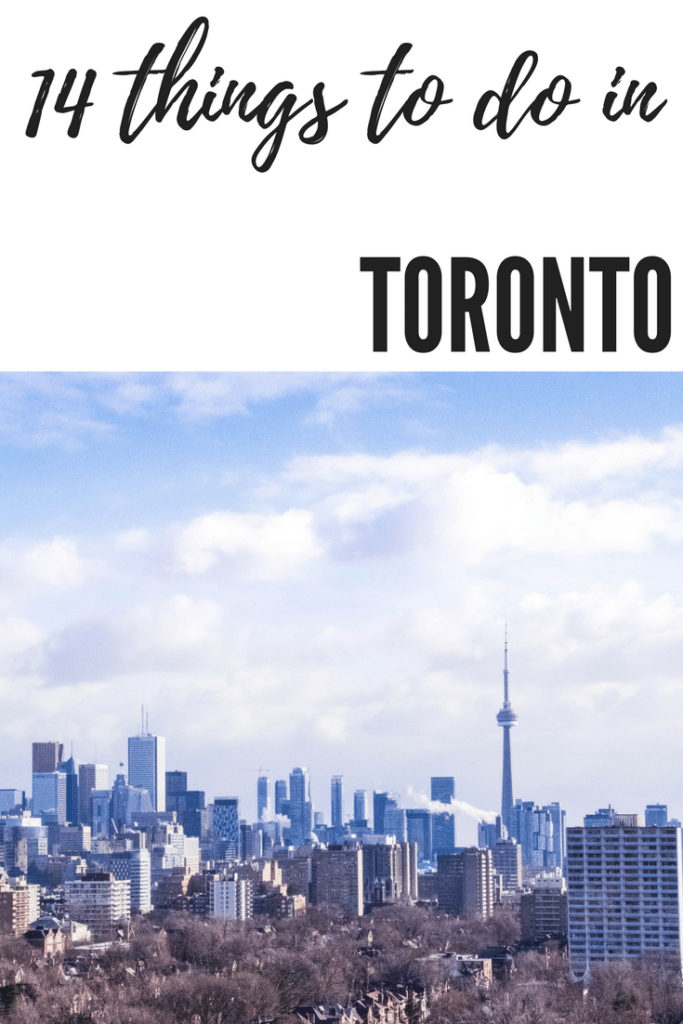 I visited Toronto almost 7 years ago whilst I was studying French in Montreal. I say visited, but I basically just went up to CN Tower, had dinner somewhere and then went to Niagara Falls the next day. Having spent more time there I now know there are plenty of things to do in Toronto.

When we first moved to Canada in early 2017 we were both keen to spend a decent amount of time in Toronto. We wanted to see whether we’d want to settle there. I’d never been to Vancouver (the city we had our sights set on) and Thom had never been to Toronto. Whilst we were fairly certain we’d both love Vancouver more (& we do), I still like Toronto as a city and it definitely has it’s plus points against Vancouver. It’s more of a ‘city’ city for one and it’s bigger than Vancouver with more touristy things to do; particularly if you’re not very outdoorsy.

Whilst I’d technically already been to Toronto, I’d still count myself as a first-timer to the city back in 2017. If you are too then here are my top things to do in Toronto for first-time visitors.

Casa Loma is the largest castle in the whole of North America and it is just outside downtown Toronto.

If you too are from Europe, you’ll probably be surprised at just how new it looks. Built in the early 1900s, this definitely isn’t a very old building but it’s still fun to explore.

You can climb the two towers of the castle and from wherever you are you’ll get great views of downtown Toronto and the CN Tower in the distance.

It’s full of dinosaur skeletons, natural history exhibits and ancient history too. If you need somewhere to pass away a rainy day, or it’s simply too cold outside to explore the parks, then you won’t regret visiting the museum.

Top tip: On the first Friday of the month the museum holds Friday Night Live. During this time there are lots of food and drink stalls and music. It’s only open to adults at this time (19+) but looked like great fun!

Visit the Hockey Hall of Fame 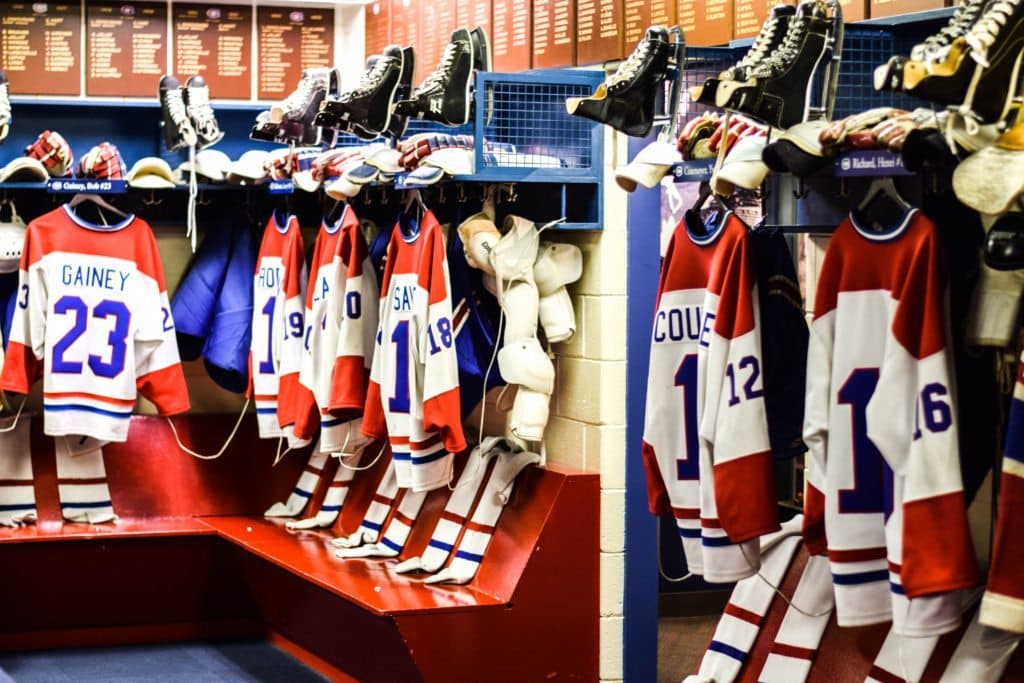 Even if you’re not an ice hockey fan, a visit to the Hockey Hall of Fame should be on your list of things to do in Toronto.

Whilst we don’t understand the rules of ice hockey, we enjoy watching it and were amazed at the sheer size of this museum/altar to hockey.

The place is full of shirts from ice hockey teams the world over. There are a few movies to watch (including a 3D one!) and some games to play too.

If you are an ice hockey fan then you’ll enjoy it even more. Especially as this is where The Stanley Cup is kept at the moment and you can have your pictures taken with it!

Tim Horton’s is Canada’s busiest coffee chain and besides coffee they serve up a variety of doughnuts, soups and more. The coffee here isn’t exactly great, but it is cheap. If you’re visiting Toronto for the first time a coffee in one of the many Tim Horton’s branches throughout the city is almost a right of passage. 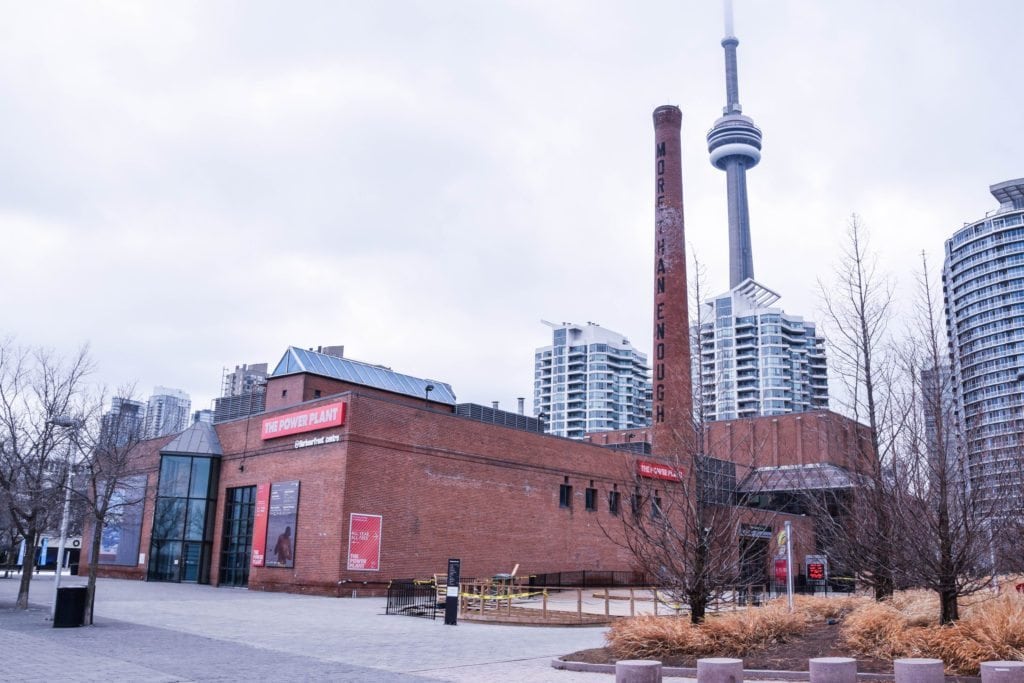 In the winter Toronto’s water front is a blustery place to be, but come summer and it’s a great place to walk along. The Harbour Front Centre is where many activities and festivals are held throughout the year. And, whatever the weather, you’ll always find something to keep you entertained for a few hours.

During our visit in early February there was an ice skating rink outside and you could walk through the artist studios in the waterfront building watching them make textiles and ceramics.

A must for any first time visitor to Toronto is the CN Tower. It’s not for you if you’re afraid of heights though especially as there’s a glass walkway. If you’re not scared of anything then visit during the warmer months and do the Edgewalk where you lean off the outside platform for a picture that’ll definitely scare your parents. 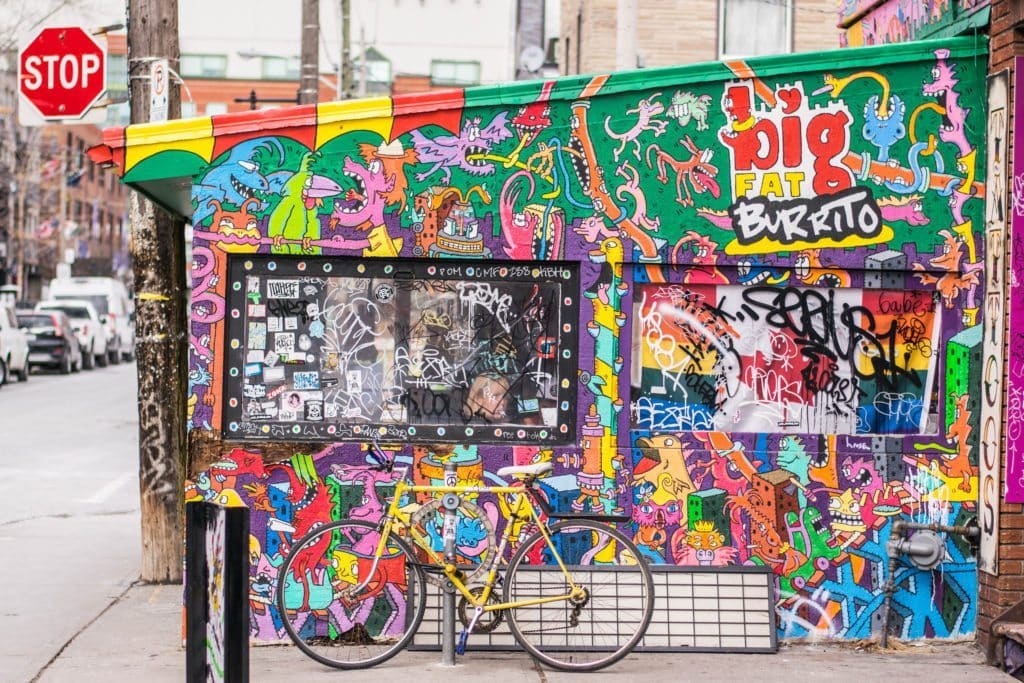 Kensington Market is often referred to as Toronto’s most vibrant and diverse neighbourhood. It isn’t exactly a market in the way you’d expect. It’s more an area of Toronto with lots of cool restaurants, shops and street art.

We stopped at Rasta Pasta and enjoyed a big portion of jerk chicken with rice, beans and veg for $8.

The Queen Street West area of Toronto is the name given to a series of districts and neighbourhoods towards the west of downtown Toronto.

The western end, “Queen West”, is now best known as a centre for Canadian broadcasting, music, fashion, performance, and the visual arts. 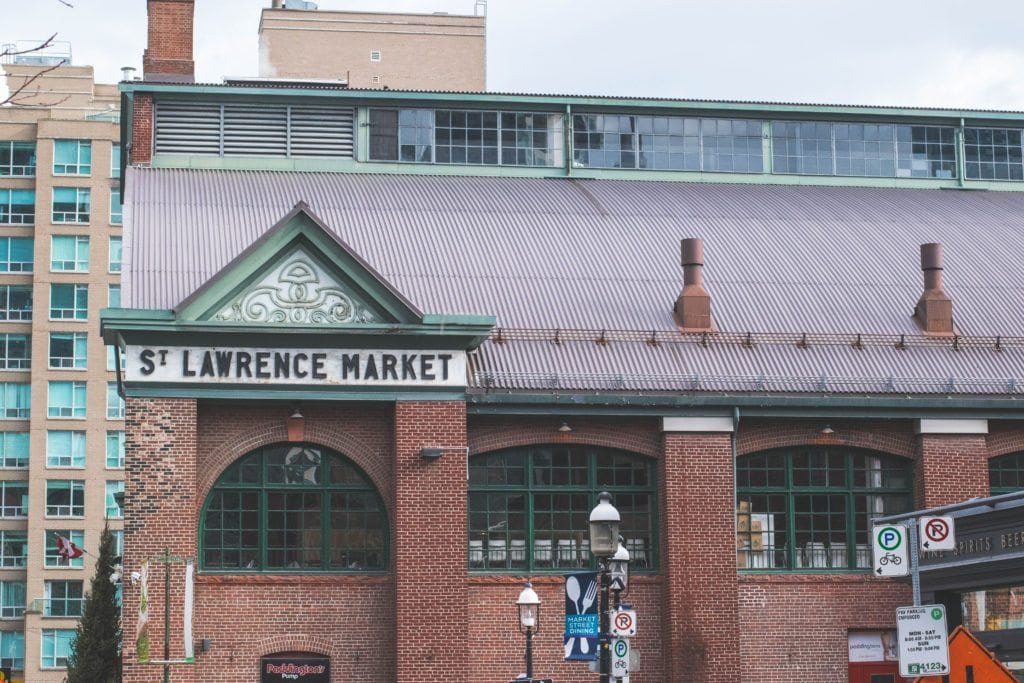 Foodies will love St Lawrence Market and any a visit here should be on everyone’s list of things to do in Toronto.

The market is on two floors and is home to fruits, vegetables, meats, fish and more. If we lived in Toronto, I’d definitely want to come to the market to buy meat and fish for special dinners!

Downstairs are a few restaurants and a bakery which had some of the flakiest and biggest pastries I’ve seen outside of France. We ate at the Greek place downstairs and had a lovely grilled chicken wrap. Their baklava looked great too!

Shopaholics unite! The Eaton Centre is a huge shopping mall in downtown Toronto that caters for everyone no matter what your budget. We found ourselves spending a lot of time in here (almost accidentally) as it was warm and we needed to splash out on some new clothes to see us through our first Canadian winter. 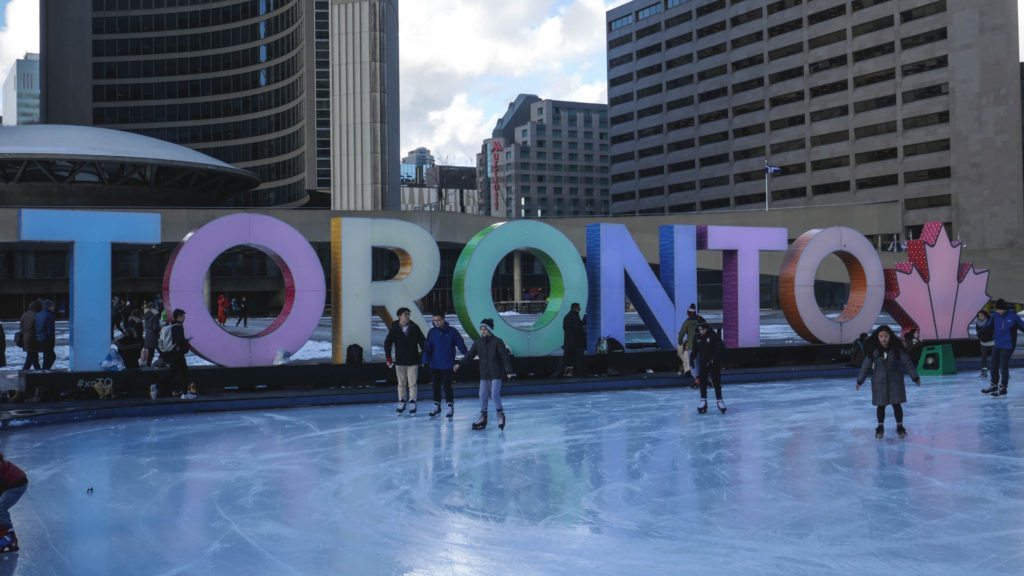 First time visitors to Toronto in the winter should definitely hire some skates and hit the ice. Toronto has a lot of outdoor ice rinks. The ice rink right outside Toronto’s city hall is picturesque and has the huge Toronto sign alongside it which makes for some great pictures.

Each ice rink has its own rental shack and if you’re feeling a bit wobbly some of them have little sliders you can use to hold you steady. Be prepared to be the worst on the ice if you’re not form Canada – Canadians are good at skating!

Get lost in Toronto’s PATH network

Toronto’s PATH network is a godsend in winter. Whilst we spent our first day wandering round Toronto wondering where everyone was, unbeknown to us they were strolling around in the warm beneath our feet.

The PATH network spans 30km underground and is full of shops, restaurants and cafes. It’s a bit of a maze so you’ll probably get lost but it’ll definitely keep you warmer! 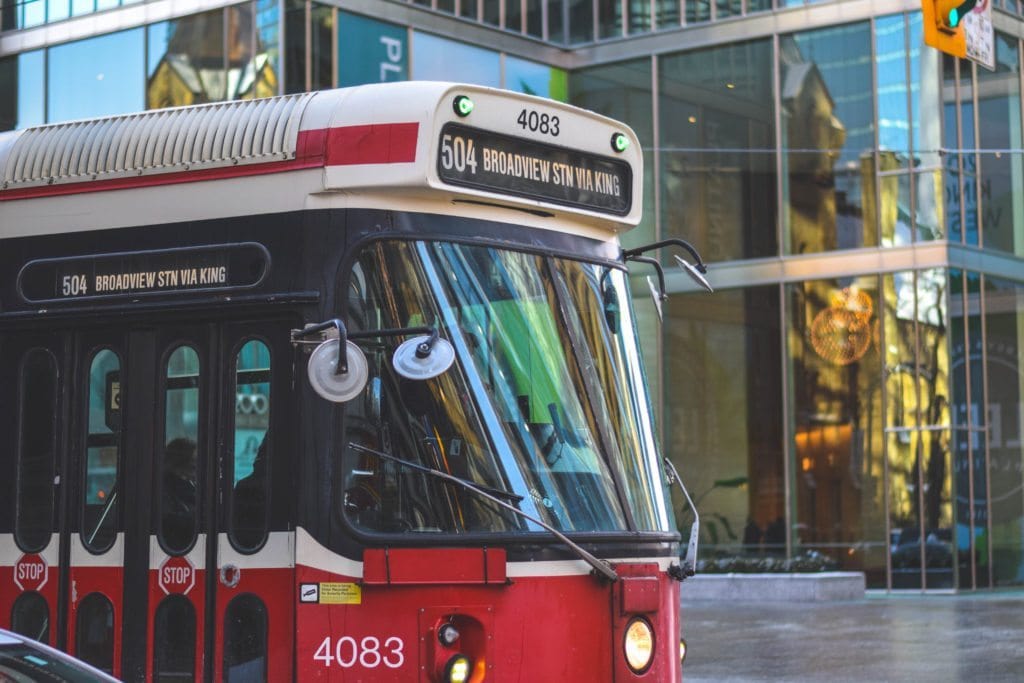 One of the easiest ways to get around Toronto is by street car. These trams criss-cross all over the city and for $3.25 you can go pretty much anywhere.

Sure they get busy at rush hour (just like London’s tube). And yes, they are liable to getting stuck in traffic but they’re pretty good on the whole.

Plus, coming from somewhere that has a distinct lack of trams, riding on one still feels like a novelty!

Toronto’s Distillery District is made up of cobbled streets and old factory buildings. In my view it’s one of the most picturesque parts of Toronto. The district was even designated a National Historic Site of Canada in 1988!

There are many restaurants, cafes, bars and shops all housed within the old Gooderham and Worts Distillery.

During our visit there was a light festival happening like this one in London last year and there were some very impressive installations! 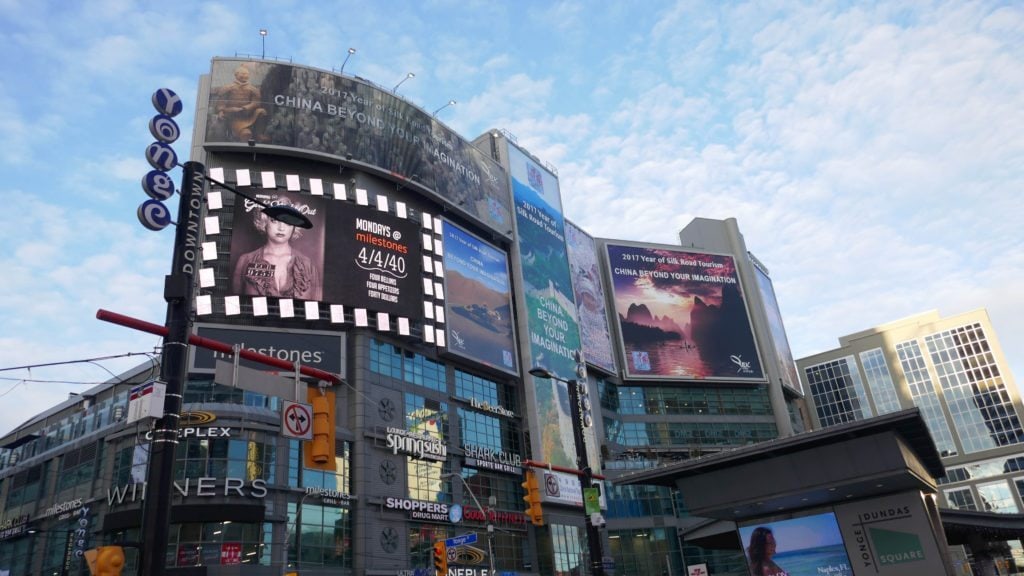 The Times’s Square of Toronto, Yonge-Dundas Square, always has something going on to keep you entertained. There’s the adverts, buskers and free concerts, films and shows almost all year round.

Oh, and there’s free wifi too so if you need some during your stay in Toronto, or are just desperate to upload that new photo, you’ll get your wifi fix here.