Macao is similar to Hong Kong in that it has special status allowing it to rule itself separate from Mainland China. Historically, Macao (or Macau) was a Portuguese colony and you’ll notice Portuguese influences in the food in Macao as well as some architectural influences. Macau was given back to China in the late 1990s and it’s since become a UNESCO World Heritage Site. If you’re wondering what to do in Macao you’ll likely have come across the fact that Macao is sometimes called the “Vegas of the East”. This is as it has many casinos and many visitors to Macao go there to test their luck. However, that’s not the only thing to do in Macao. There are plenty of fun activities in Macao and this Macao travel guide will show you what to do there!

What to do in Macao

Macao is close to Hong Kong and this makes it a popular place to visit as a day trip from Hong Kong. During our trip to Southern China, we visited Macau for a couple of days before heading back to Hong Kong.

Macao or Macau? Both are used and are correct. Macau is the traditional Portuguese spelling, but most English speaking countries and China use Macao.

Macao is on China’s southern coast about 60km west of Hong Kong. The territory consists of Macau Penninsula, Taipa and Coloane.

How to get to Macao 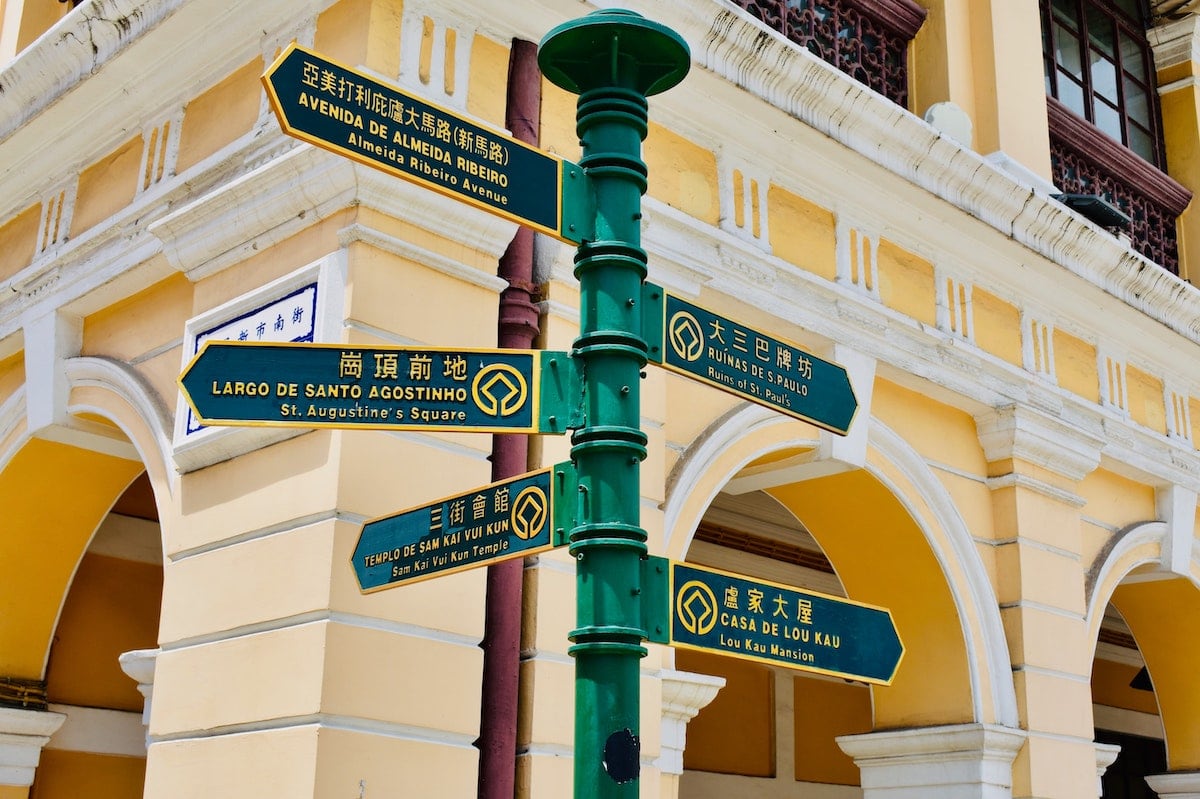 Most people visit Macao from Hong Kong but we visited from Mainland China. I’ve included information on how to get to Macao from both Hong Kong and China.

How to get to Macao from Hong Kong

There are two ferry options between Hong Kong and Macau; the Cotai Jet or the Turbo Jet with both taking around an hour. The prices are pretty much the same but the Turbo Jet takes you right to the historic centre of Macau, whereas the Cotai Jet goes to Taipa (a bit further out).

How to get to Macao from China

Coming from Mainland China, the easiest way to get to Macao is to get the train to Shenzhen and then the ferry from Shenzhen to Macao. There are 12 sailings a day and they take around an hour. There’s only one company to choose from Turbo Jet.

How to get around Macao

Once you have arrived in Macau, it is easy to get around by taxi, hotel shuttle buses or on foot. Taxis are metered in Macau and can be hailed fairly easily, but you might find that you don’t really need a taxi because almost every hotel in Macau has a free shuttle bus that transports people between the historic centre, the various Macau hotels, to and from ferry piers and to and from the airport. These shuttle buses are free to use, and you do not need to prove that you are staying at their property.

Tips for travelling to Macao

How much time to spend in Macao?

Macau isn’t huge and unless you’re planning to spend loads of time gambling, or relaxing by the hotel pool, then 1 or 2 days in Macau will be enough.

Where to stay in Macao

These hotels in Macao are in a great location for your trip. 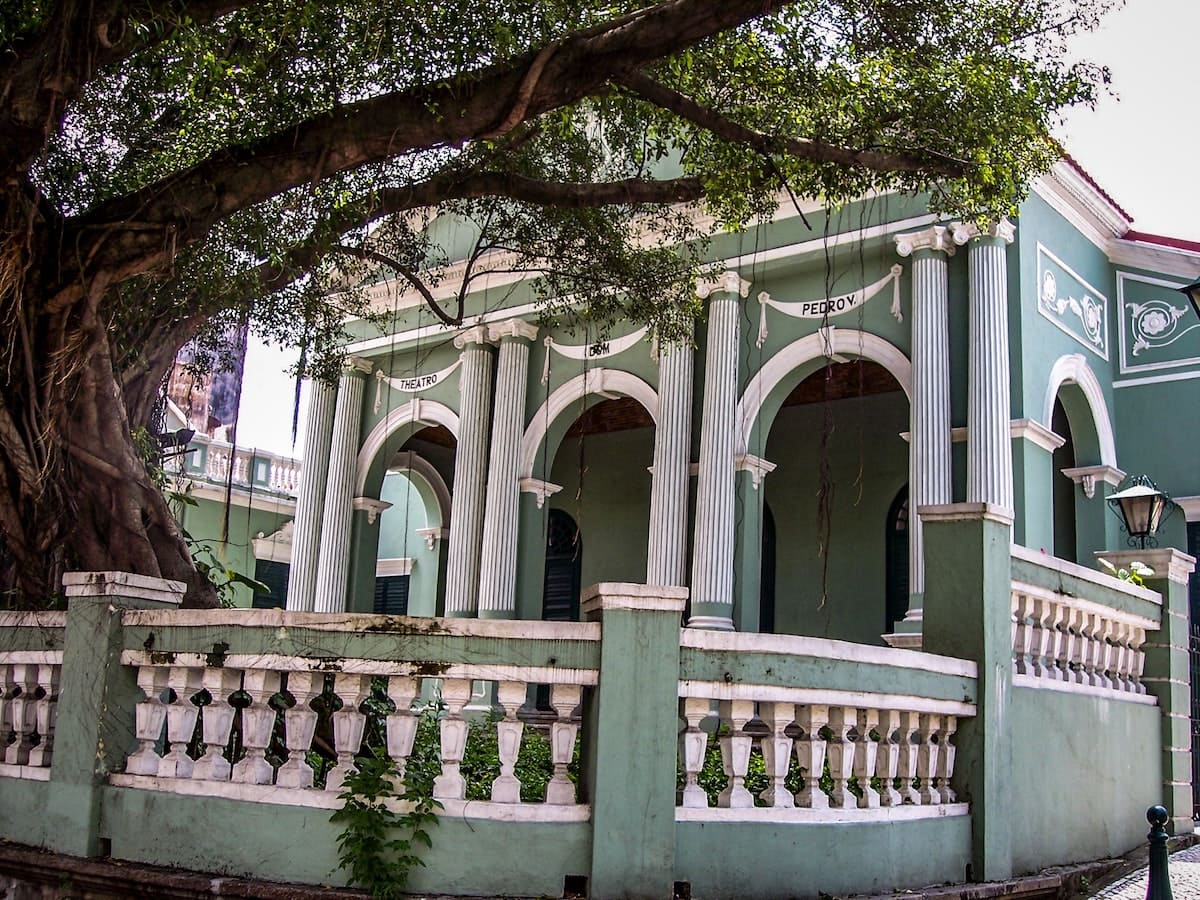 What to do in Macao – see beautiful buildings like this!

While having a reputation for being the Las Vegas of the East, gambling isn’t the only thing to do in Macau. Below are lots for you if you’re wondering what to do in Macau or where to go for Macau sightseeing!

A newer addition to the list of Macau attractions is the bungee jump. If you’re up for some adrenaline, then check out the AJ Hackett bungee jump! It’s the Highest Commercial Bungee Jump in the world and for that reason it’s super popular.

This bungee jump is at the top of the Macau Tower and you’ll jump from 233m above the ground! There’s also the option to do a Skywalk or a SkyJump which is a little less scary than the bungee jump.

Walk the walls of Mount Fortress

One of the most popular places to visit in Macao is Mount Fortress. Also known as Monte Fort or Fortaleza do Monte, Mount Fortress was built in the early 17th Century and played a vital part in the attempted invasion of Macau by the Dutch.

The fortress still has several canons and offers a different perspective of St. Paul’s Ruins. Entrance to the fortress is free and definitely worth doing.

Even if you’re not wanting to gamble any money, walking around the casinos is definitely a fun thing to do in Macao! We wandered around and bet a couple of $. We had fun and even won back our money plus enough to get a bubble tea! The bets aren’t cheap if you want to play on the tables, so we found a couple of slot machines instead.

There are 33 casinos in Macao and several of them are on the Taipa side, connected by walkways so you could spend hours walking around without even going outside!

Admire the tilework at the Municipal Affairs Bureau

You simply can’t visit Macao without spending time in Macau’s Historic Centre. This area is at the top of the list when it comes to what to see in Macau.

The centre comprises of over 20 historically significant landmarks (some of which are covered in more detail in this post). These buildings include religious structures and public squares that represent the unique Chinese-Portuguese history of Macao. It’s also the area that’s been made a UNESCO site! 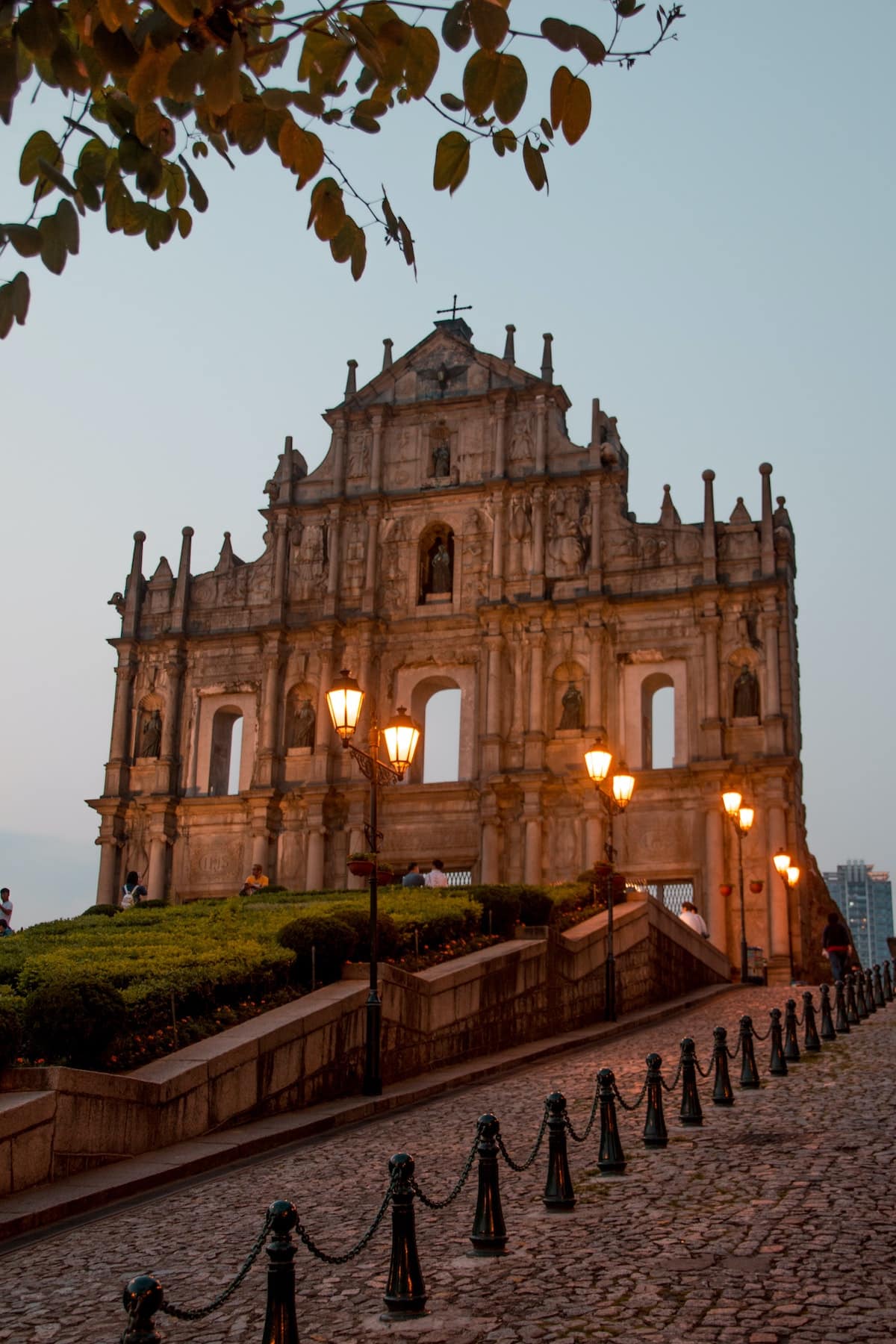 See the Ruins of St. Paul’s

The Ruins of St. Paul’s are hard to miss and the chances are that you’ll walk past them without even intending too. The ruins are at the heart of Macau’s historic cenre and date back to the early 17th Century. The remaining facade is over 25 metres high and built of granite which meant it survived a fire that burned down the rest of the churh.

These ruins are perhaps the most iconic landmark in Macau and they’re busy the entire year round. You can also get a great view of them from the fortress mentioned above.

Senado Square is right at the heart of Macao’s historic centre and is a must-see in Macao. The public square was paved with a mosaic pattern in the early1 990s and it’s known for this artwork as well as the pretty coloured buildings border it.

There are some great shops and restaurants around the square, or just pick a side street and see what you find! 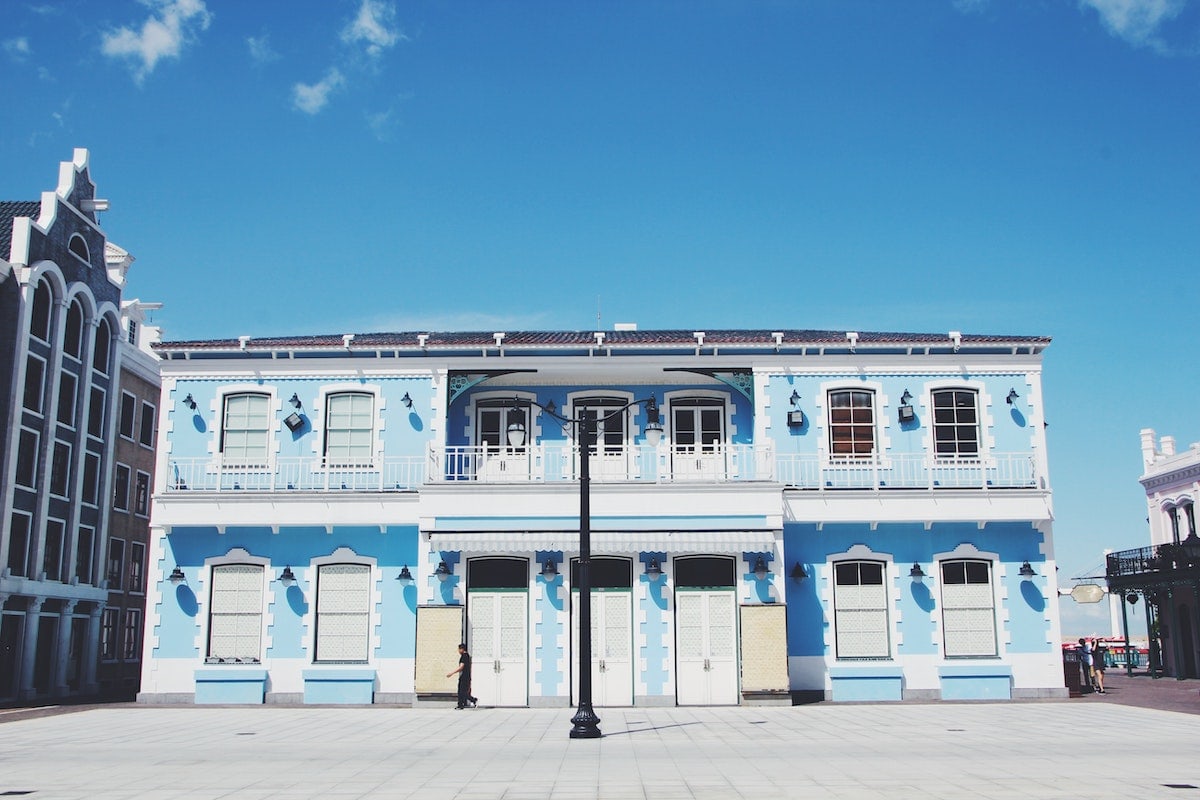 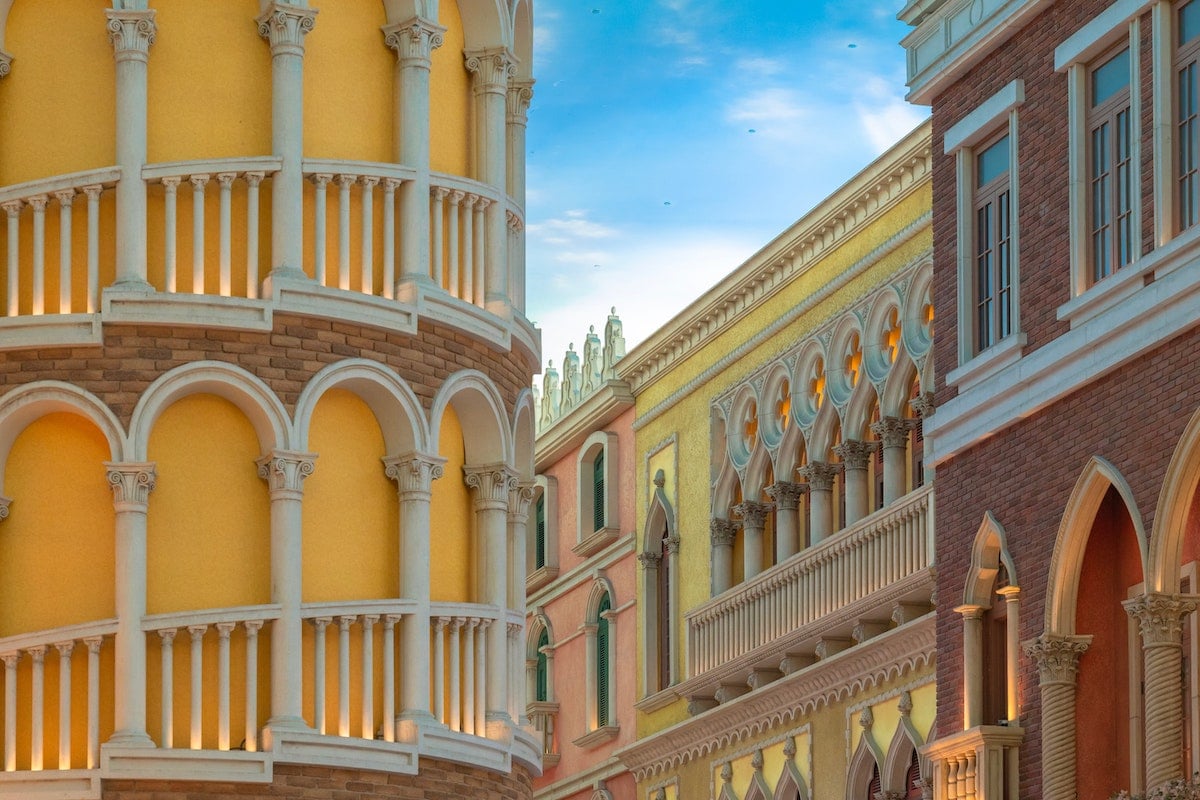 Relax by the pool

If you’re planning to spend a few days in Macao, it’s nice to book a hotel with a pool so you can relax after a busy day of exploring.

Whilst not the most budget-friendly thing to do in Macau, the Sky 21 Rooftop Bar is a great place to go for a pre or post dinner drink in Macao. The rooftop bar has an amazing view and you shouldn’t need to book in advance either.

MacauSoul is super close to the Ruins of St. Paul and has a great wine bar. With a menu of over 400 Portuguese wines, it might be hard to choose but whatever you opt for it’s likely to taste great.

Watch the Eiffel Tower light up 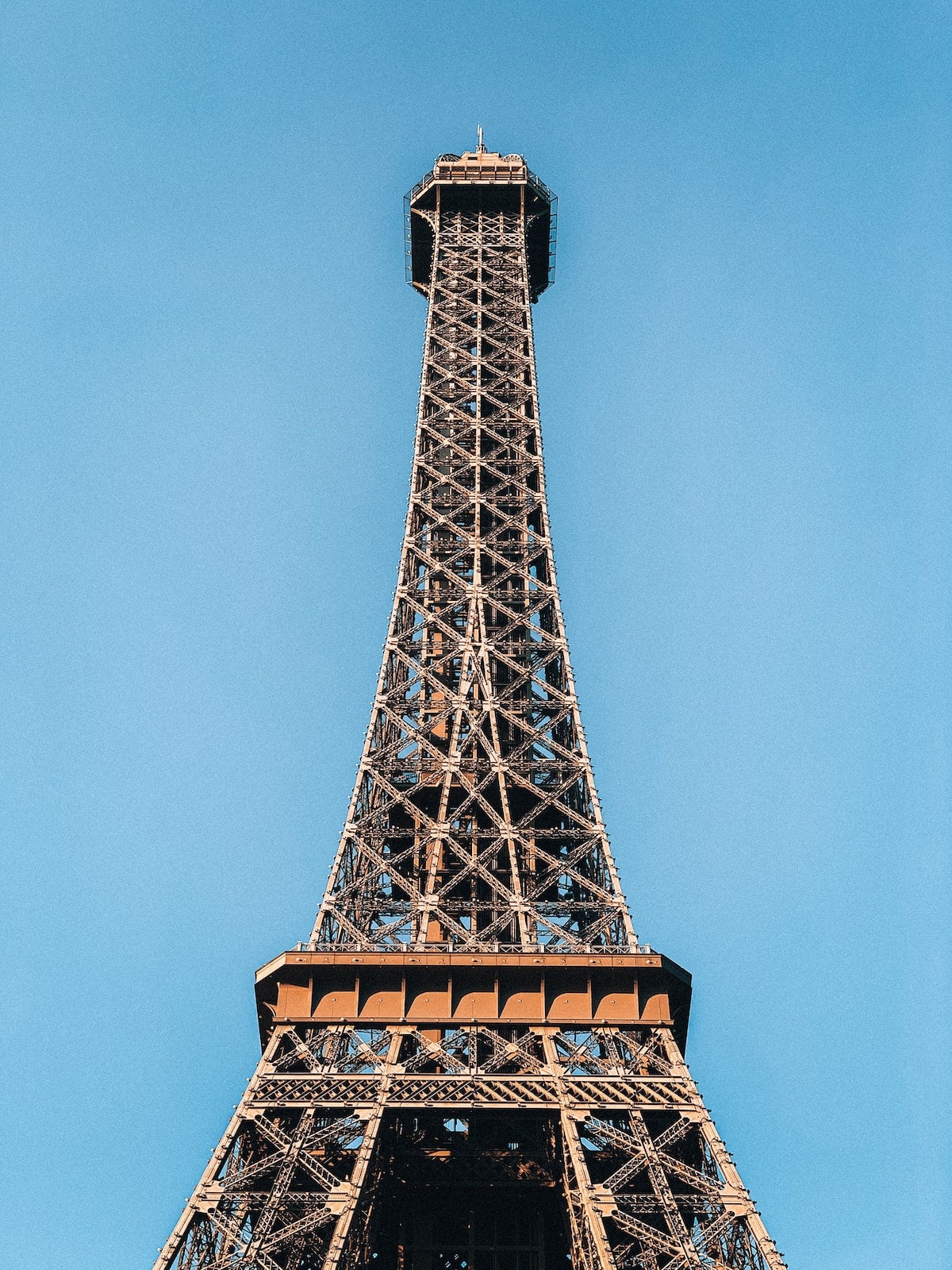 No, I’m not confused and thinking I’m writing a post about Paris. Macao has its own versio of the Eiffel Tower outside the Parisian Casino. You can head up to the observation decks on deck 7 and 37, or admire it from below. Whilst not quite as tall as the real Eiffel Tower, this half-size Eiffel Tower is still impressive.

Enjoy sunset on the Macau strip 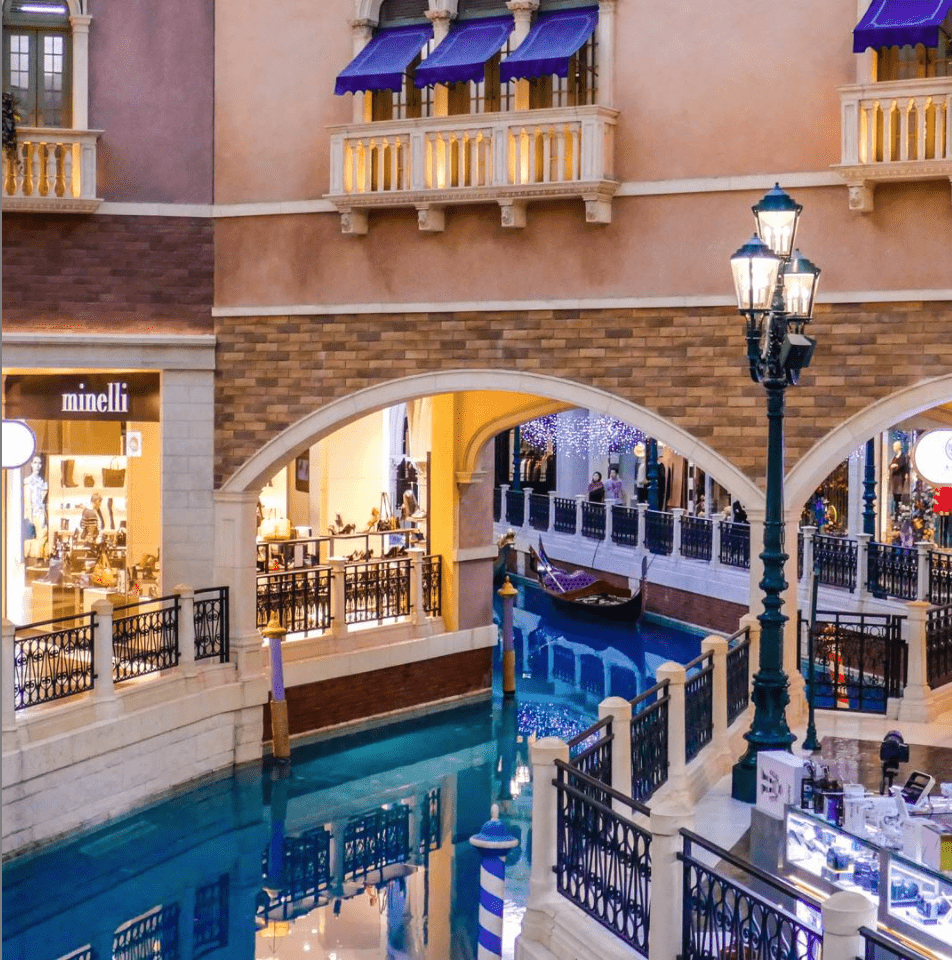 Inside the Venetian, Macao!

One of the best places to enjoy the sunet is from the Macau strip. Wander over the walking bridges which cross over the strip and take in the sunset amongst the enon lights.

Taipa Village is located in Taipa not far from the Cotai Strip. This village used to be home to local fishermen and has traditional cobbled streets, shophouess and cultural things to do including museums. Keep your eyes open for the street art too! If you’re a food lover, then make sure to check out Rua do Cunha food street!

The Macau Grand Prix was taking place when we visited and so many of the streets near the ferry were set up ready for the cars. The event usually takes place towards the end of November and sees both cars and motorbikes take to the streets to race it out.

For a quieter option of places to visit in Macau, head to Coloane. Coloan is to the south of Macau and is home to Hac Sa black sand beach. It has an interesting history, having previously been the place that pirates hid out at due to the coves. Wandering around the narrow streets gets you away from the more crowded parts of Macau and it’s a great way to pass an afternoon. 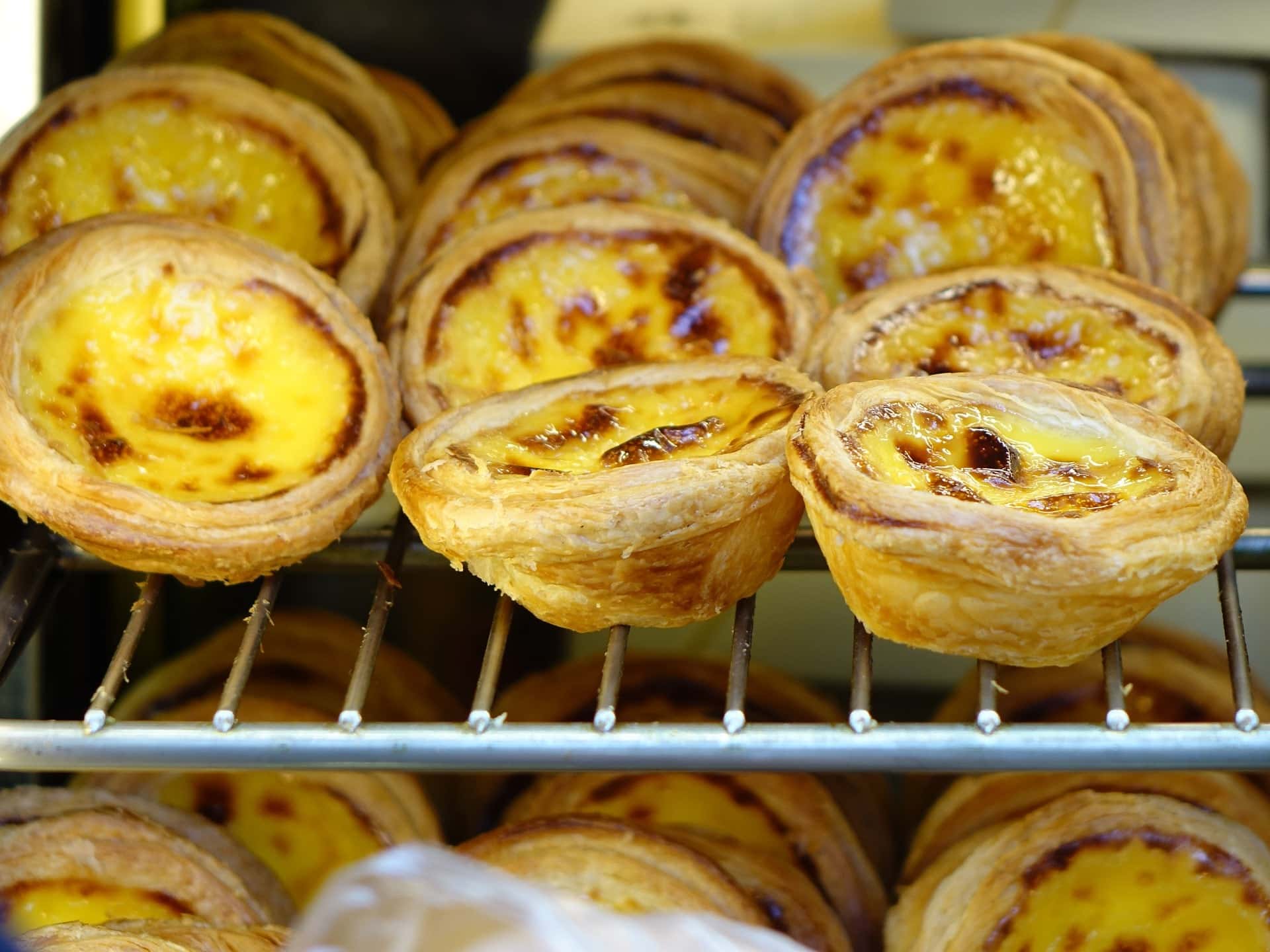 You can’t go to Macau and not eat an egg tart; it’s one of the best things to do in Macao! They’re delicious and whilst similar to the Portuguese egg custard tart they’re not exactly the same. When it comes to food in Macau make sure this is on your list.

The best place for an egg tart in macao is Lord Stow’s Bakery where they sell thousands of tarts a day. But, you’ll find plenty of places to get one all over Macau.

Take in the views of the Lisboa hotel 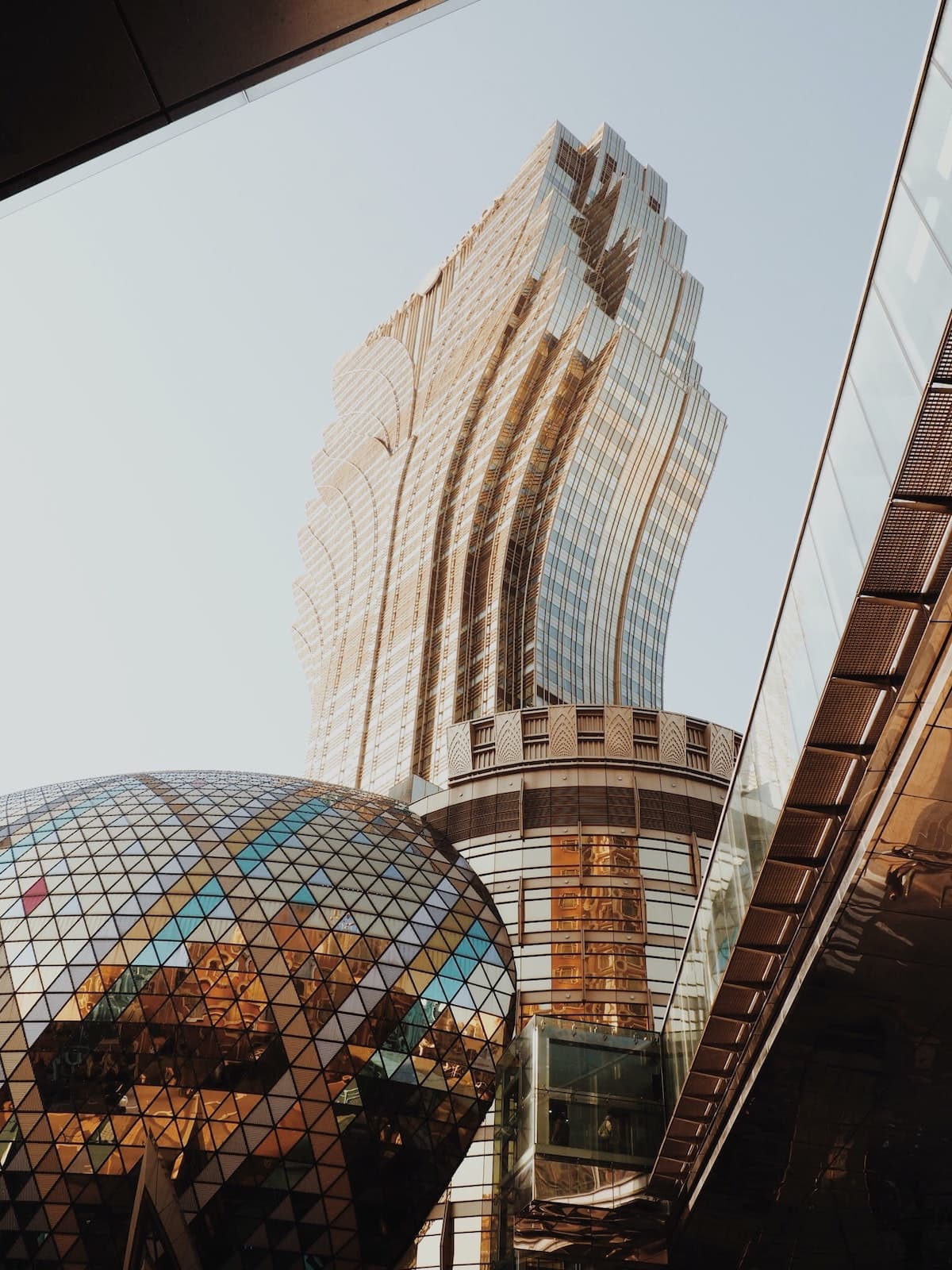 One of the prettiest buildings in Macau is the Grand Lisboa Hotel. This hotel is just over 250m tall and definitely unique in terms of what it looks like!