I think if you embrace winter by still getting outdoors then it makes the short days and grey skies a lot more bearable. I’m a skier and so have always loved getting up into the mountains bust since moving to Vancouver I’ve enjoyed a different way of experiencing snowy landscapes: snowshoeing.

I’ve done a couple of snowshoe trips so far this winter with hopefully a few more to come! More recently I embarked on my longest snowshoe trip yet with a friend to snowshoe Windy Joe Mountain in EC Manning Park, BC. 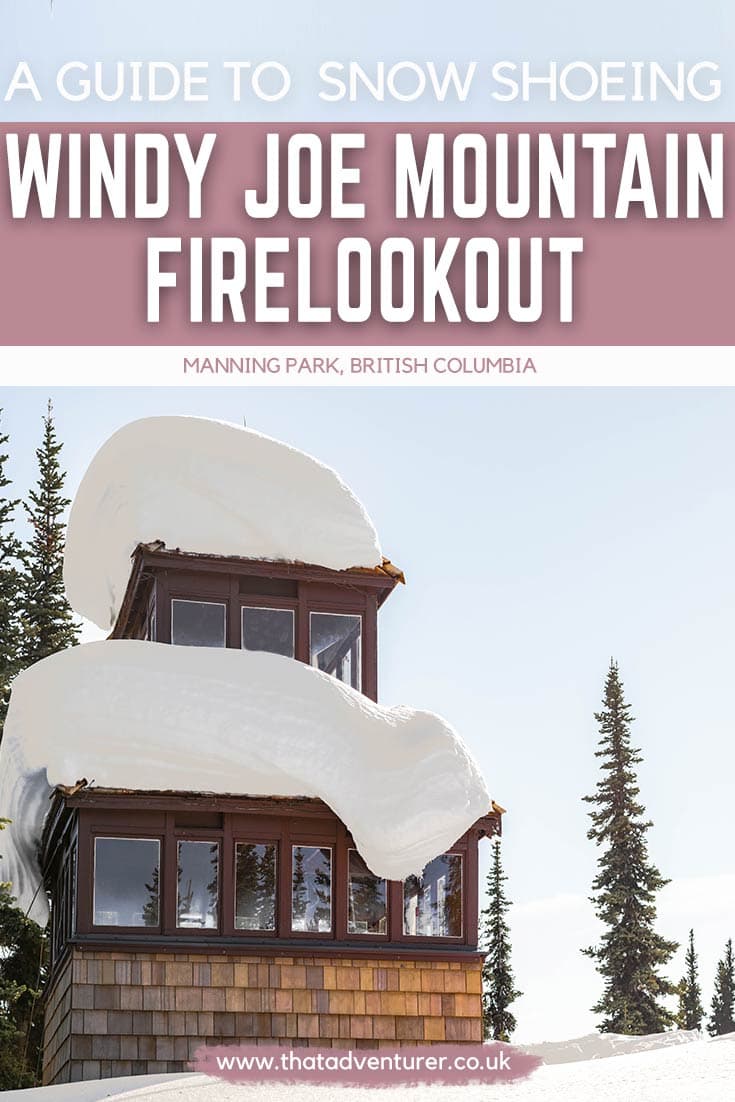 Manning Park and the Manning Park Resort are located along Highway 3 in British Columbia, Canada. This road just so happens to be one of my favourite BC roads too thanks to its scenic views!

This area is home to both a resort and a provincial park. The resort is made up of accommodation, a downhill ski area and a Nordic ski area with snowshoeing and cross country ski trails.

There’s also a larger area known as E.C Manning Park which is run by BC Parks.

Manning Park is also where the Pacific Crest Trail (PCT) starts or (more commonly) ends. If you’re visiting Manning Park in August or September, you may see some PCT hikers finishing up their epic hike in Manning Park.

In the winter Manning park makes a great place for snowshoeing near Vancouver.

Where is Manning Park?

Manning Park is about 2.5-3 hour’s drive away from Vancouver in the south coastal region of British Columbia, Canada. It’s in the Cascade Mountains and is home to great snow.

About the Windy Joe Mountain Firelookout

This is one of the Manning Park hikes that is great both in winter and summer. At the summit, you’ll come out at the refurbished lookout. It hasn’t been used since 1965 and is now open to the public.

It’s not meant to be used as a backcountry hut for overnight trips and there’s no insulation or stove but it’s a great spot for a lunchtime picnic! 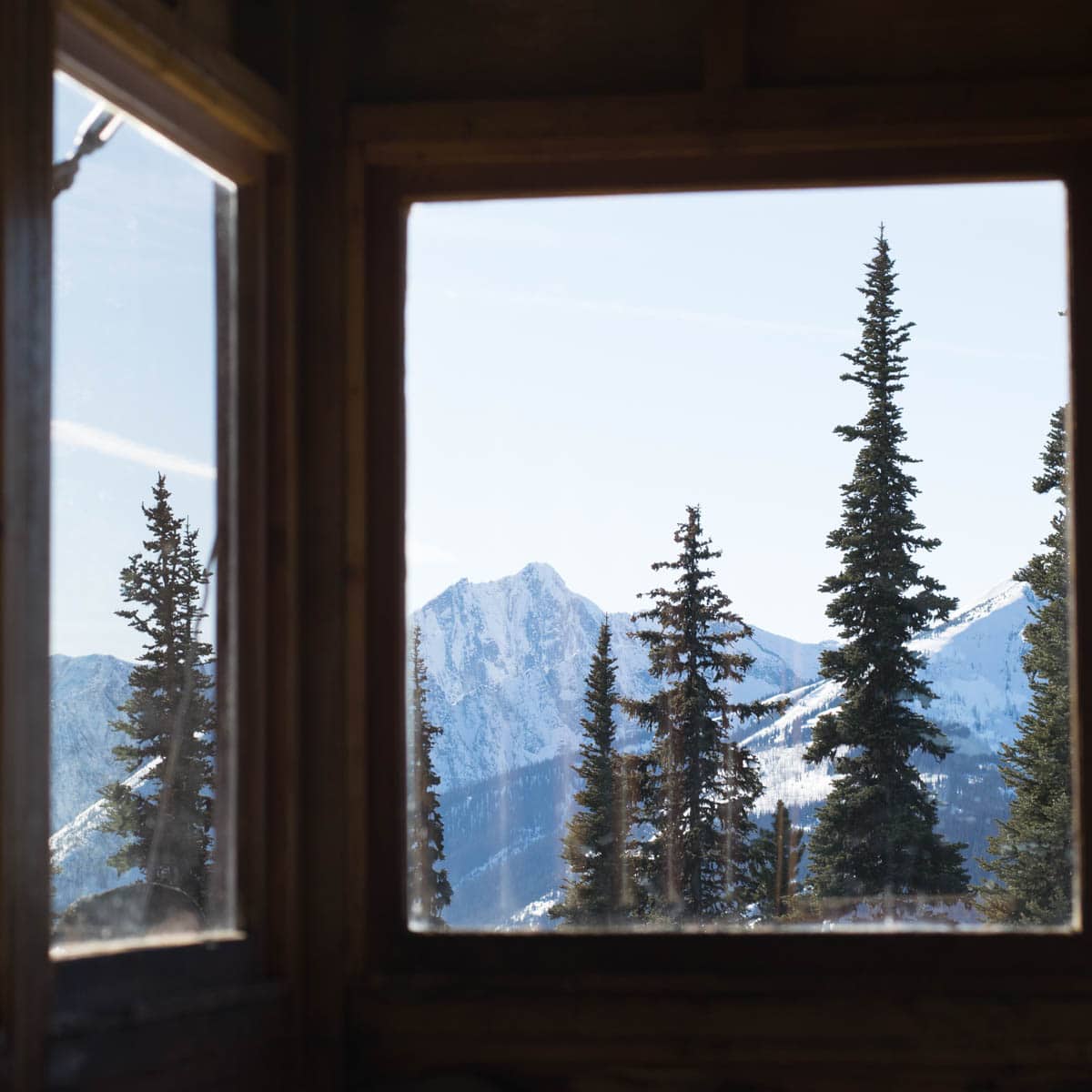 We snowshoed to Windy Joe in Manning Park in late January and the weather was beautiful. Having driven through a pretty gloomy looking Chilliwack and Hope it was a bit of a surprise to see blue skies when we parked up at Manning Park Resort.

We hired snowshoes for the day and then drove out to the trailhead which is a couple of kilometres from Manning Park Resort.

The Windy Joe Mountain trail begins by following the Similkameen Trail along the Similkameen River and you’ll being by snowshoeing through a fairly flat, forested area that acts as a nice warm-up for the climb that comes later. There are a few sections here where you’ll cross over some streams and climb up and down a little. Don’t worry though, there’s nothing too challenging on this Manning Park hike.

Around 2km in, you’ll come off the Similkameen Trail and join the Windy Joe trail. This is where you’ll being the gradual, but fairly long trail.

Since this is a popular snowshoeing trail in Manning Park, it’s unlikely that you’ll be the one having to break through fresh snow. When we snowshoed the snow was pretty well packed which makes it a lot less tiring! However, I’d still recommend snowshoes over crampons as there were some areas where it was a bit softer and the snowshoes stopped us from sinking too far.

About 3.5km in you’ll cross a stream and then, after second stream crossing (there’s a trail you won’t need to walk through water/ice), you get the fist view of Windy Joe Mountain which is the highest peak in Manning Park.

At 5.5km there’s a fork in the trail. Bear left here to stay on the WIndy Joe trail as the righthand fork takes you to Frosty Mountain along the PCT.

After this point, the trail turns into a series of switchbacks as you wind your way to the summit of Windy Joe Mountain and the Manning Park fire lookout. 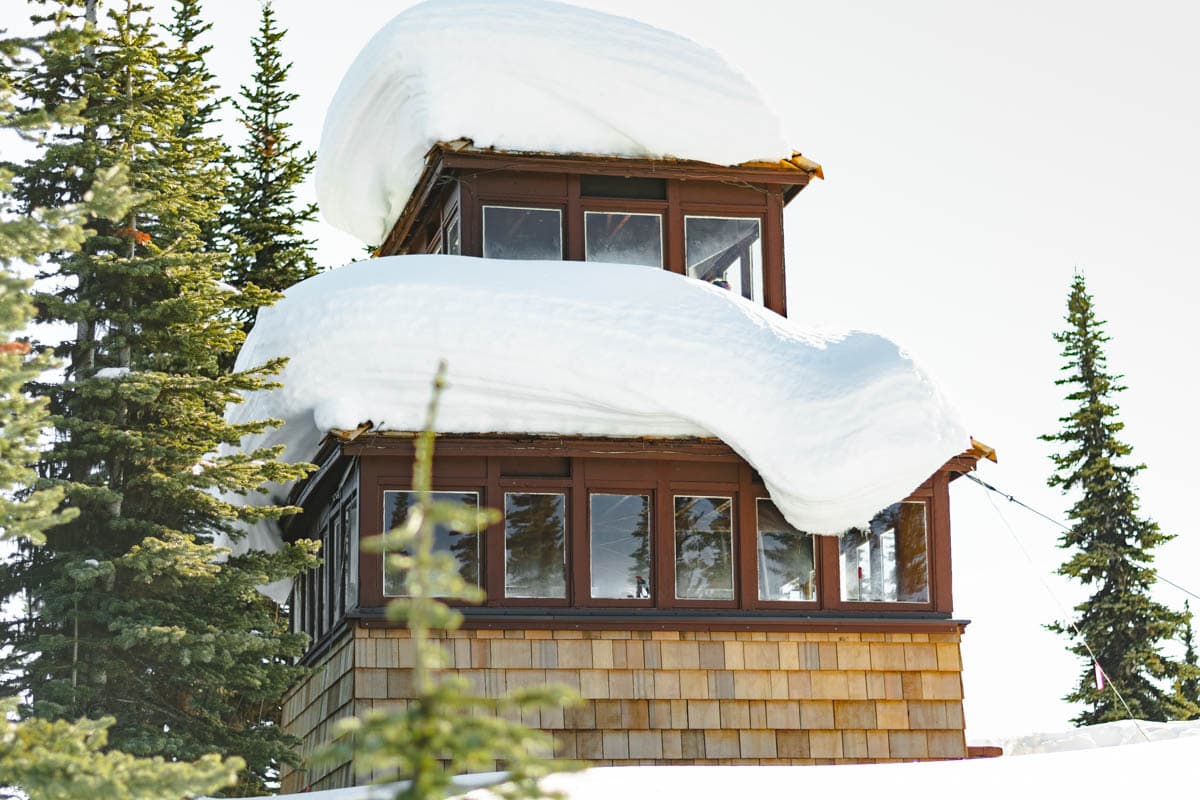 When we hiked this section there were quite a few fallen trees that we needed to duck under or go around. We did pass a couple of guys with a chainsaw (and feared for our death!) who were skiing up and clearing trees so the way back down was much easier.

At the top of Windy Joe, you’ll get great views towards the south over to Frosty Mountain and across the US/Canada border. You can also see towards the north into BC too. The fire lookout is one of the main attractions of this snowshoe trail. It was open when we visited and the upstairs area had the sun streaming in making it super warm. The original instrument used for recording the location of fires is still there. There are useful plaques around the fire lookout too so you can identify the mountains you’re looking at. 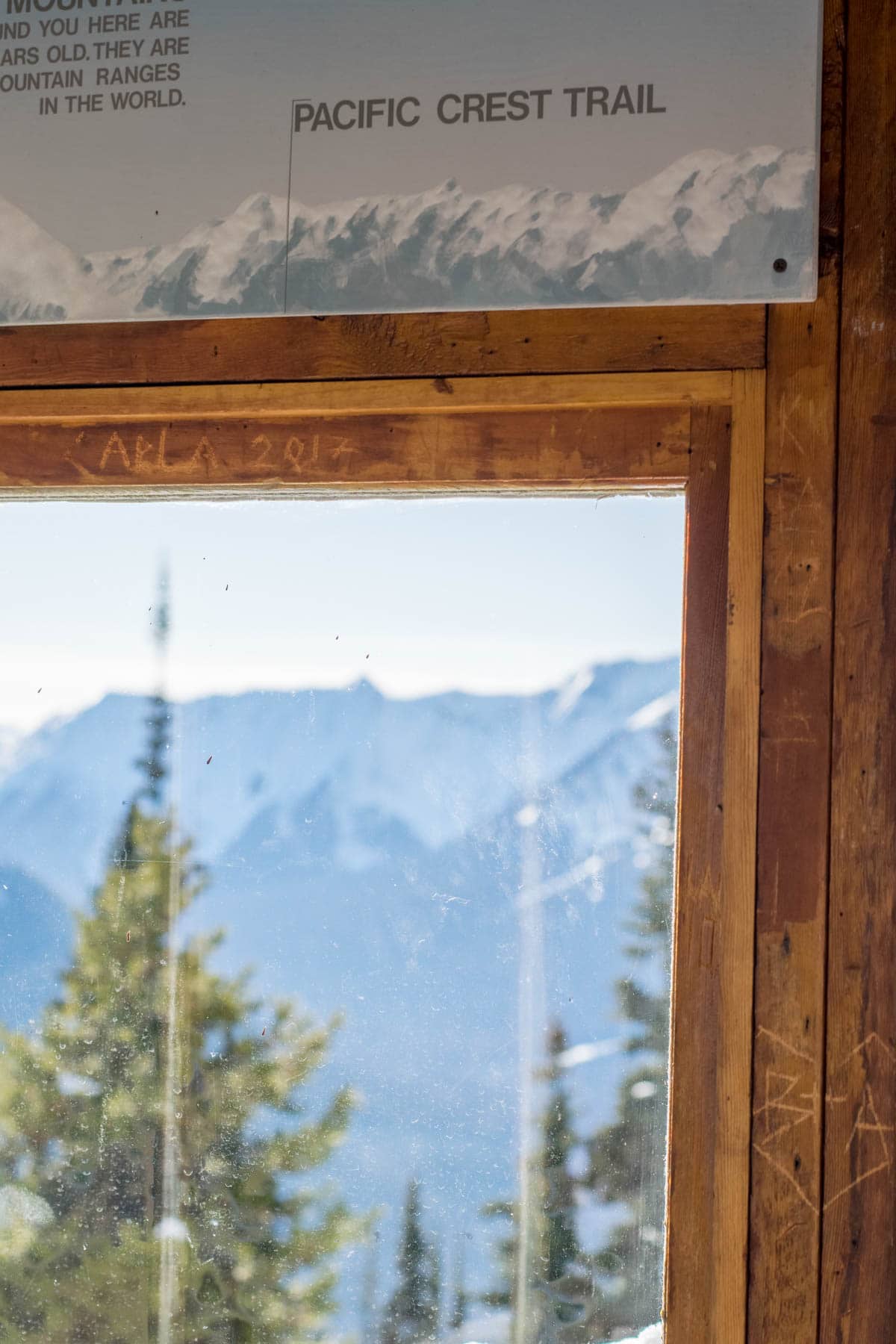 To return, you simply retrace your steps.

Where to stay near Manning Park

There aren’t loads of places to stay near Manning Park but there are a couple of options for Manning Park hotels. Here’s my pick of the closest three Manning Park accommodation options. 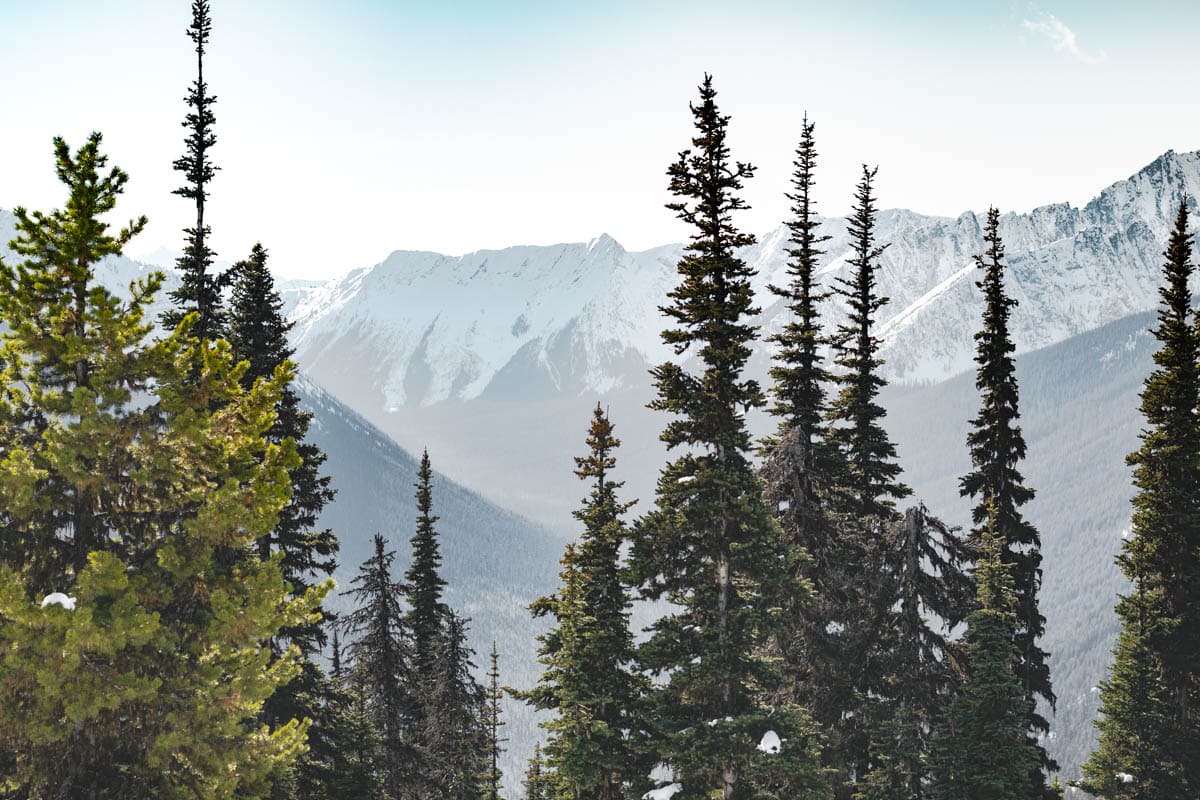 If you’re looking to camp in Manning Park in the summer (perhaps you’re not planning on snowshoeing to Windy Joe) then you’re in luck. There are 5 campsites near to Manning Park Resort as well as some others a little further out in the backcountry of EC Manning Park. However, only two of these are open in the winter for winter camping in Manning Park.

All campsites must be booked through DiscoverCamping.ca and it’s recommended you book in advance especially in the summer and over long weekends.

The two campsites open in winter are listed below and they cost $13 per person, per night:

In the summer the other Manning Park campgrounds are listed below.

Walk-in/Wilderness Camping (all $5 per person per night):

What to pack for snowshoeing in Manning Park 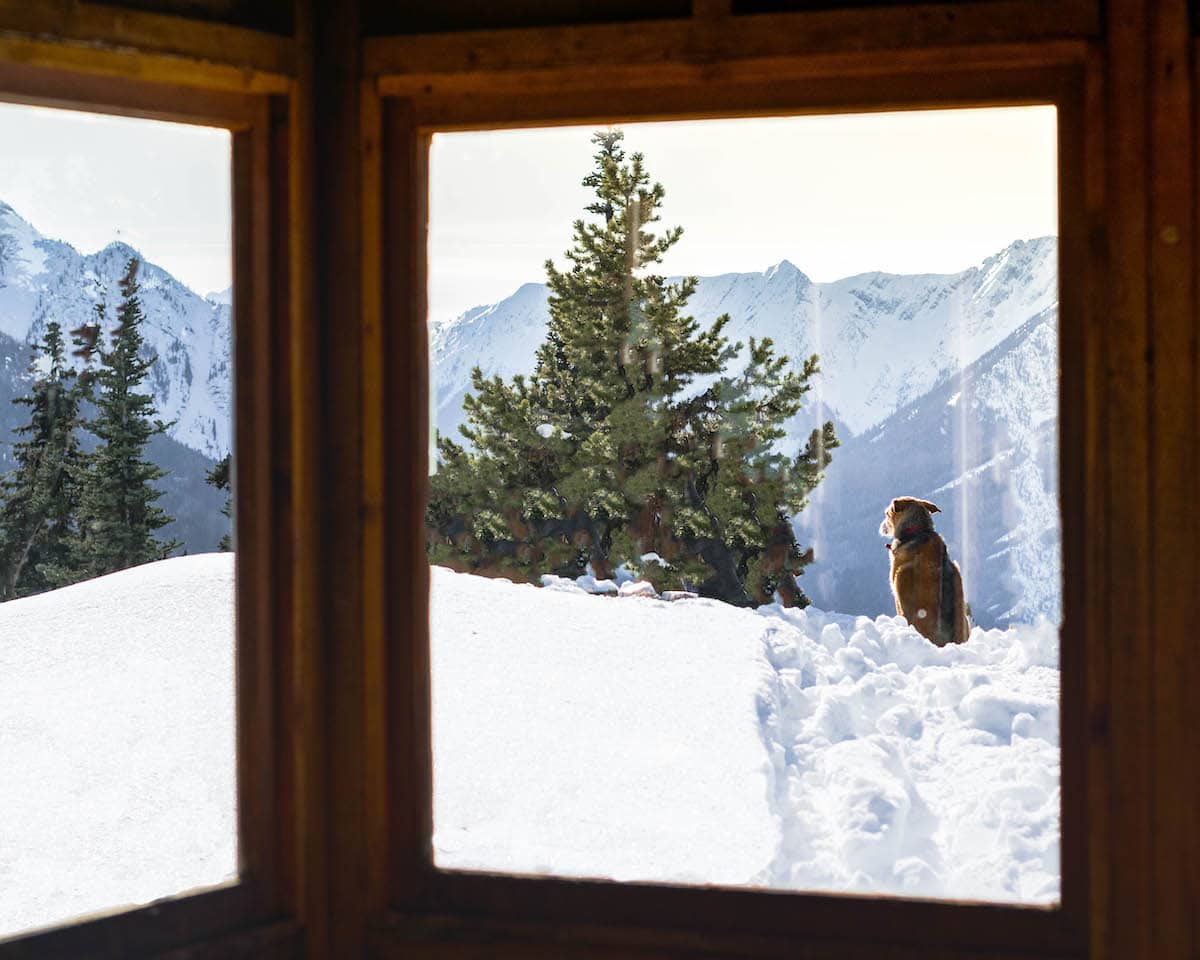 Before you go snowshoeing it’s important to make sure you’re prepared. The following items should be on you or in your pack.

Where to rent snowshoes near Manning Park

Wondering where to rent snowshoes for your snowshoe trip to Windy Joe Mountain in Manning Park? Here are a few places you might pass along the way.

What to know before snowshoeing in Manning Park