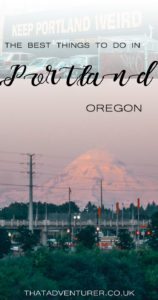 Portland was one of my favourite cities on our three month USA road trip. It’s got that proper west coast vibe that I love. It’s chilled out, you can see mountains even when you’re in the middle of the city, and you get a sense that many of the city’s inhabitants probably spend their weekends hiking, kayaking or skiing. There’s a lot of outdoors things to do in Portland, which, obviously, is right up my street.

There are so many great (and free) things do in Portland. There’s an abundance of tasty food (in fact some of the best food on our whole trip was eaten in Portland), tonnes of street art, and a few random sights too. Oh, and an incredible book shop!

If you’re headed to Portland and was somewhere to stay, check out my list of budget friendly Airbnbs and hotels in Portland.

Without further ado, here are some of the best things to do in Portland. 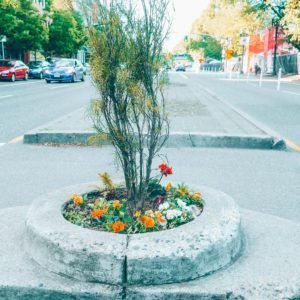 This is the smallest park in the world. Seriously it’s so small you could walk past it and not notice. At 61cm wide this tiny park can be found in the middle of Southwest Naito Parkway at Taylor Street. Unfortunately it was looking a bit dead but rumour has it it’s also the largest leprechaun colony west of Ireland… 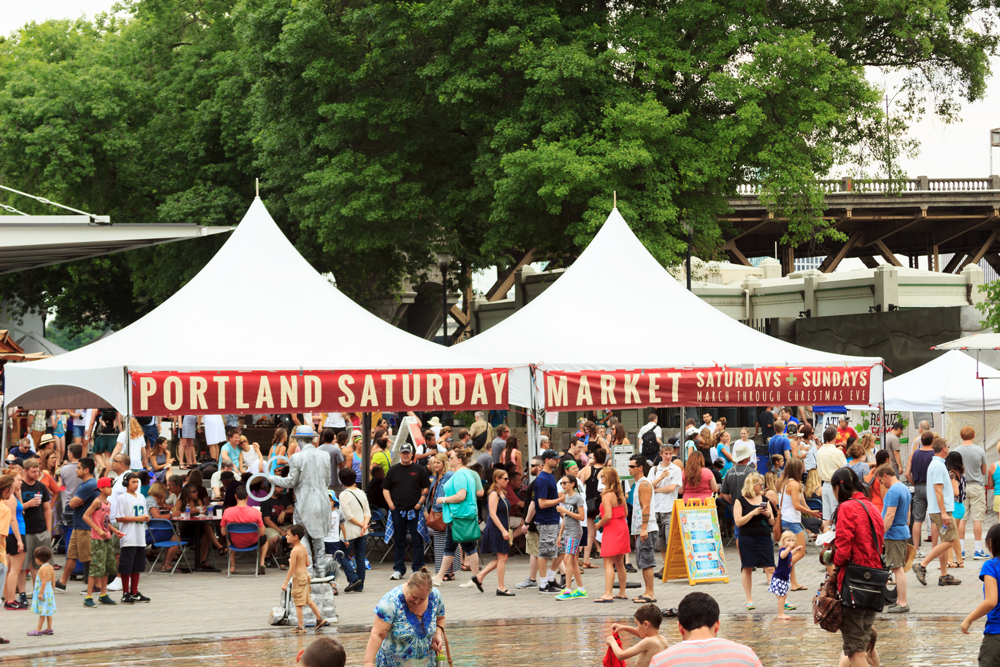 It may seem weird to add a religious thing to do in Portland to this list, but trust me, The Grotto is worth a look. It’s a national Catholic shrine set into a cliff face and also has beautiful gardens to explore.

During the Christmas period there’s also a festival of lights which makes the whole place even more beautiful. 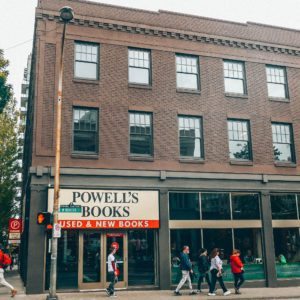 Best book shop ever. Powell’s sells used and new books and is absolutely massive: there are over 3,500 sections! I could’ve spent all day browsing the shelves. Some of the most interesting sessions are the rare and out-of-print books as I’ve never seen this before in another bookshop.

They also have some great postcards and cards which I couldn’t resist buying a few of. 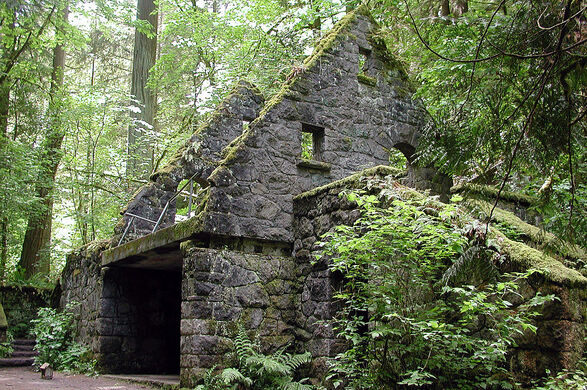 If you’re easily scared maybe don’t add Portland’s Witch’s Castle to your list of things to do. “The site of both murders and restrooms“, the Witch’s Castle is an easy half mile hike from the car park near the Audubon Society in north-west Portland.

Given the buildings murderous history, the name doesn’t come from anything to do with witches. Instead it was given to the stone built, moss covered hut by students who began partying here in the 1980s. 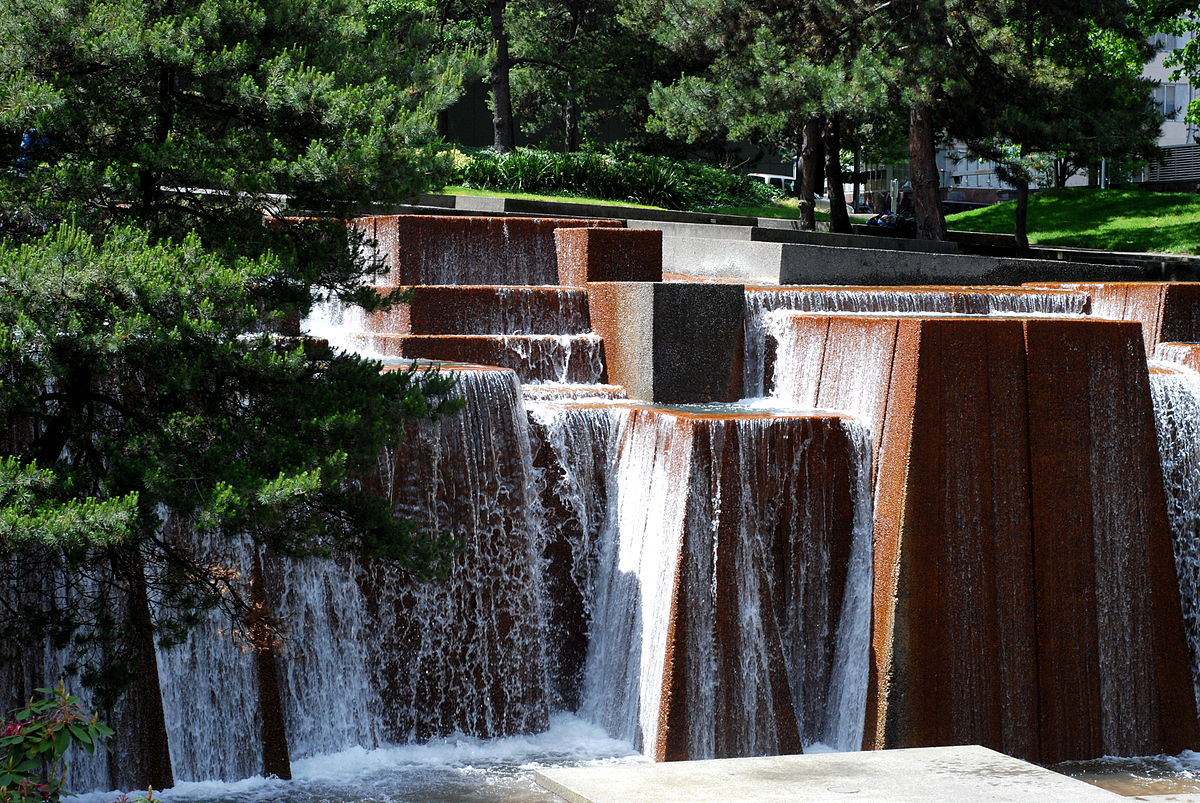 Just like the world’s smallest park, the Keller Fountain wasn’t looking its best when we visited. The water wasn’t running so it was more cool looking structure than cool looking fountain! 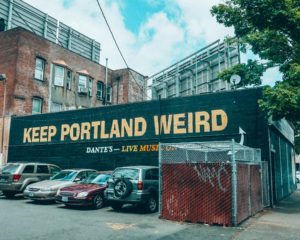 It’s not only Austin, TX which is weird. Portland, too, could be deemed weird (just look at some of the things on this list!). You’ll find this sign on 3rd street between Burnside and Ankeny. 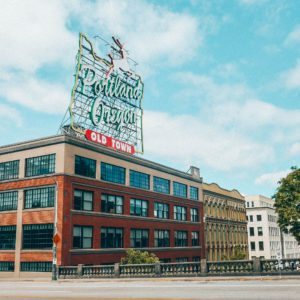 The White Stag Sign is also known as the “Portland Oregon” sign (since that’s what it says under the stag). It’s on top of the White Stag building at 70 NW Couch Street and welcomes people into downtown Portland.

Browse the shops along Mississippi Avenue

Mississippi Avenue is one of the more alternative, cool streets in Portland. It’s north of downtown and has a tonne of independent shops an eateries.

Make sure you stop by (the insta-friendly) Pistils Nursery and Solabee Flowers & Botanicals and pop into Blue Star Donuts for some energy to keep you exploring too! 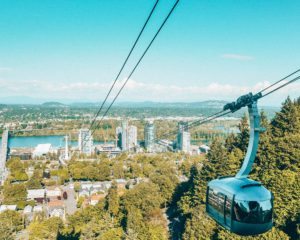 A little bit weird since it drops you off in a hospital, but the ride up is pretty cool for the views of the city. Plus, once you’re at the top you can see Mt Rainier on a clear day in the distance. If you don’t want to catch the tram back down then you can wander back into the city through the Marquam Nature Park.

Walk along the Willamette River 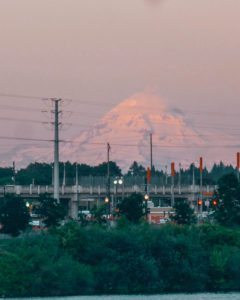 This is especially worthwhile if you’re in Portland during summer and can make the most of a warm evening and a beautiful sunset. I love being near water and strolling the waterfront in any city is always enjoyable.

Eat at the food trucks around O’Bryant Square 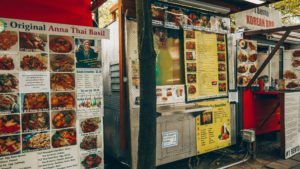 There are so many food trucks here! The best tactic is probably to buy one thing to share from several of them. Or just keep going back every day to try something new!

As I mentioned above, there is a lot of street art in Portland. One of the streets where you’ll find several murals is NE Alberta Street. On NE Alberta Street you’ll likely come across the Giant Rabbit mural and a swimming elephant mural as well as a few others.

If you want to find more Portland Street art check out these maps.

The best things to do in Gastown, Vancouver according to a local | That Adventurer