I’ve been talking about doing the Elfin Lakes trail since we moved to Vancouver. For one reason or another, it’s never quite happened. First I was intent on staying in the Elfin Lakes shelter. Then, on another weekend it was pouring with rain and 22km in the rain with no views isn’t that appealing even for someone as hiking obsessed as me. Then there was a bicycle accident that messed up my foot (which is still partly recovering) and getting stitches in my leg for something else.

But at the end of May, I said “screw it. I’m going this weekend whatever the weather!” Luckily for both Thom and I, the predicted rain held off and our return on Sunday morning was absolutely beautiful!

NEW 2021 UPDATE!
From July 22-Oct 22 you will need a day pass to access popular BC parks, including Garibaldi Provincial Park, Berg Lake, Joffre, Golden Ears & The Chief (including the Sea to Summit trail). The passes are free and available from 7am on the day before your visit. All details & information here. Day-use passes are not required for evening visits, which is after 4pm at Garibaldi, Golden Ears, Mount Robson or Stawamus Chief, or after 7pm at Joffre Lakes.

The area around Elfin Lakes has always been popular with hikers and skiers and in the 1940s a local lodge, called the Diamond Head Chalet, was built. It no longer remains, but a park ranger up at the lakes was telling some children about it. And, there’s also a small amount of wood leftover from it by the warming hut in the campsite area.

The lakes themselves aren’t the most impressive lakes out there, but they’re still pretty. The Elfin Lakes elevation is 1,600m, so it’s quite high! I personally think the main attraction is the view of the mountains you get once you reach the lakes. On the weekend we hiked to Elfin Lakes we hiked 4 hours through the snow and only saw about 5 people going the opposite direction to us. We really felt like we were in the middle of nowhere.

If you’re visiting in spring, late autumn or winter it’s likely that your experience will be an Elfin Lakes snowshoe one!

Getting to Elfin Lakes

Elfin Lakes is in the southern part of Garibaldi Provincial Park not too far away from downtown Squamish (so if you need last minute snacks get some there!).

While it is possible to drive to the trailhead without a 4×4, I’d recommend a 4×4 to get to Elfin Lakes.

The road is quite steep with lots of potholes and there are sections that are just lumps of gravel which doesn’t give your car much traction. In early spring the road gets very muddy so lower cars without 4×4 capabilities will struggle. There is another small parking lot 1km away from the main trailhead which is an option if you don’t want to push your car too much. We put Elvis (our camper van) at this parking lot and walked from there.

The area surrounding the trailhead is very popular with mountain bikers so keep your wits about you and look out for them.

It’s also a bit of a theft hotspot so remove any valuables from your car.

About the Elfin Lakes Hike

Here are some details about the difficulty and duration of the Elfin Lake hike. 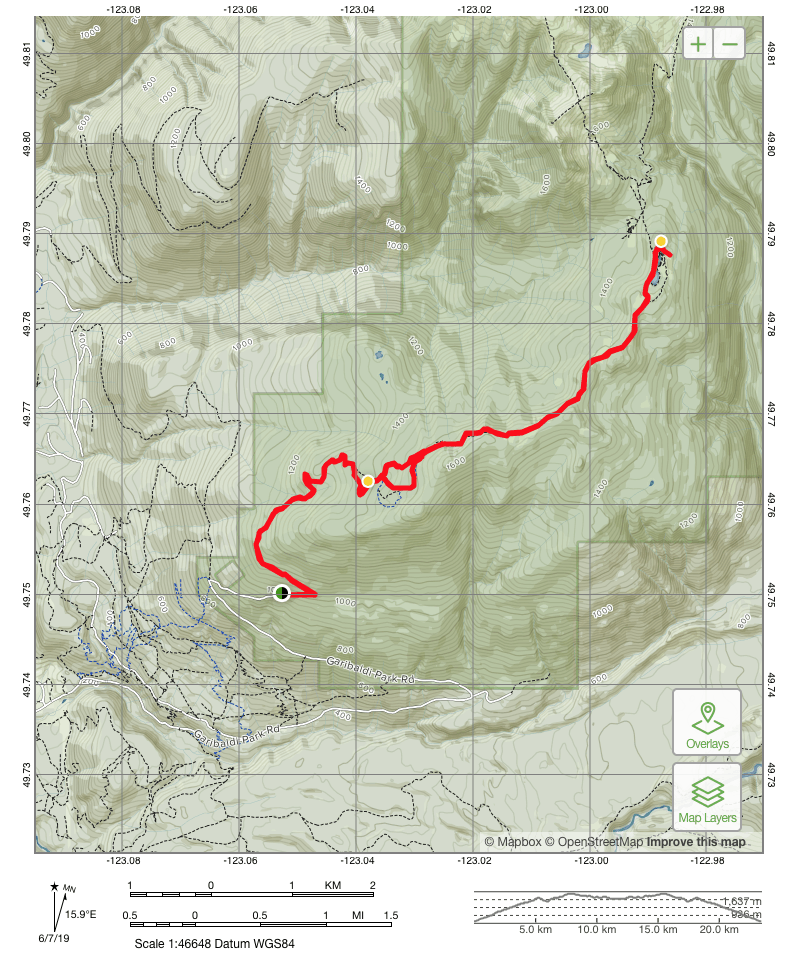 Here’s a map from the AllTrails app which I recommend getting for the Elfin Lakes, BC hike. It’s also a good idea to have a paper trail map with you too.

We weren’t sure whether we’d need snowshoes to hike Elfin Lakes towards the end of May. It’d been sunny in Vancouver for what felt like months, and most the snow off the North Shore mountains had gone. However, a quick scout around the internet for the Elfin Lakes trail conditions (see below for finding up-to-date trail conditions for Elfin Lakes) told me we’d probably want them. I’m so glad we ended up renting them. It’d have been a miserable hike without them; especially with our heavy backpacks! We parked at the lower down the car park and walked the 1km up to the official start of the trail. The trail begins by following some old logging roads and it’s a gentle uphill slope through the trees. We did see some bear poop as we hiked so make sure you take bear spray with you to be safer.

Within the first 30 minutes or so you’ll get a viewpoint out onto the Howe Sound and Squamish Spit before coming to a waterfall which was in full flow when we hiked. We didn’t get to enjoy the view on the hike out as the clouds had rolled in but we enjoyed it on the way back the next day! 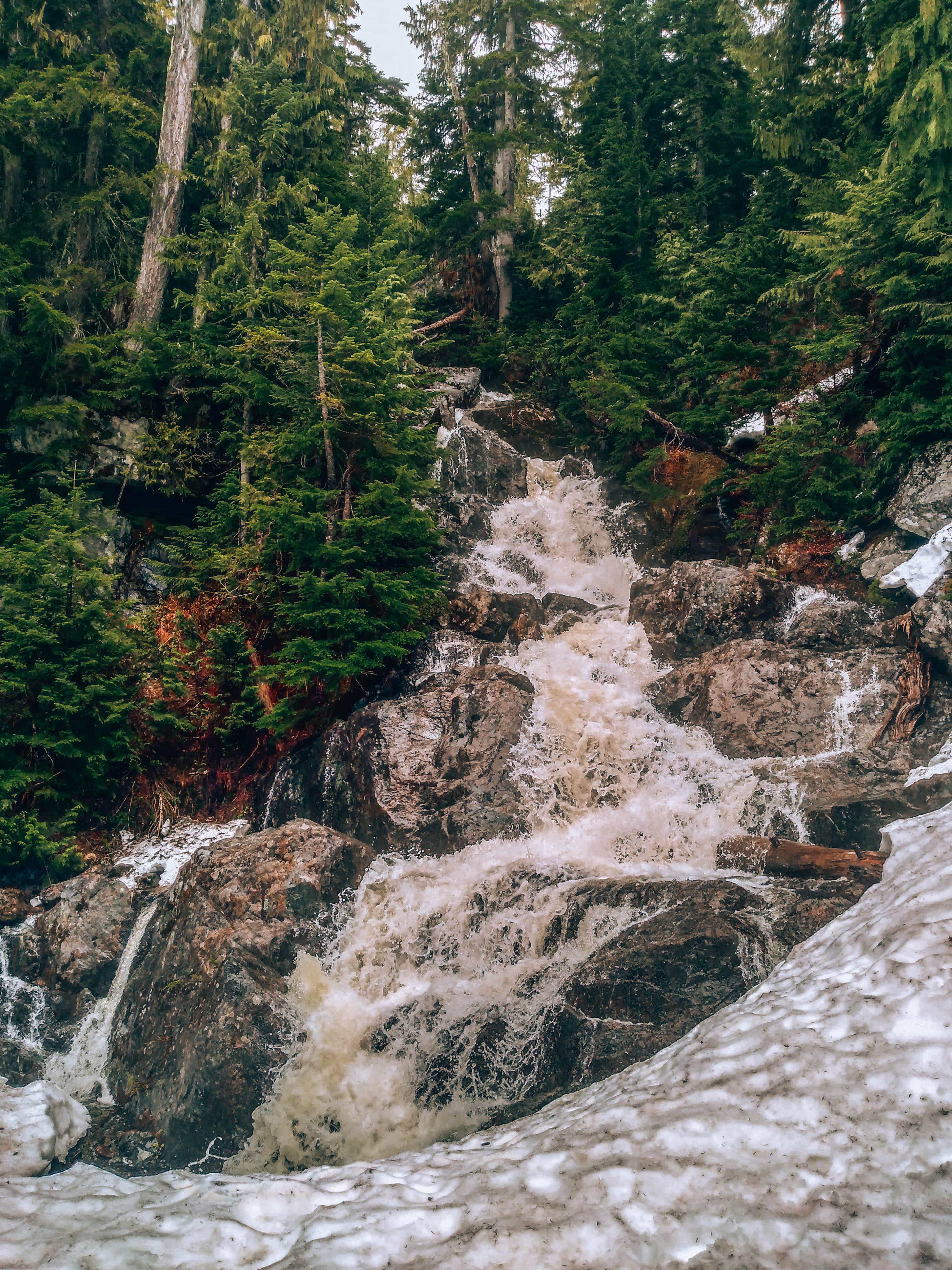 It was around this time, about 2km in, that the snow started so we strapped on our snowshoes. We hiked out to Elfin Lakes in the afternoon so the snow was quite slushy and postholing would’ve been inevitable without snowshoes.

After just over an hour’s hiking the Red Heather Hut appears. This shelter is used regularly in the winter by snowshoers and skier as a place to warm up. There’s also an outhouse here if you need a bathroom break.

We stuck our heads into the hut and found the fireplace was still warm. We imagine it was from earlier on in the day, or the day before as we know it had been raining a lot! There’s also a stove with some gas if you need a hot meal before continuing the hike. 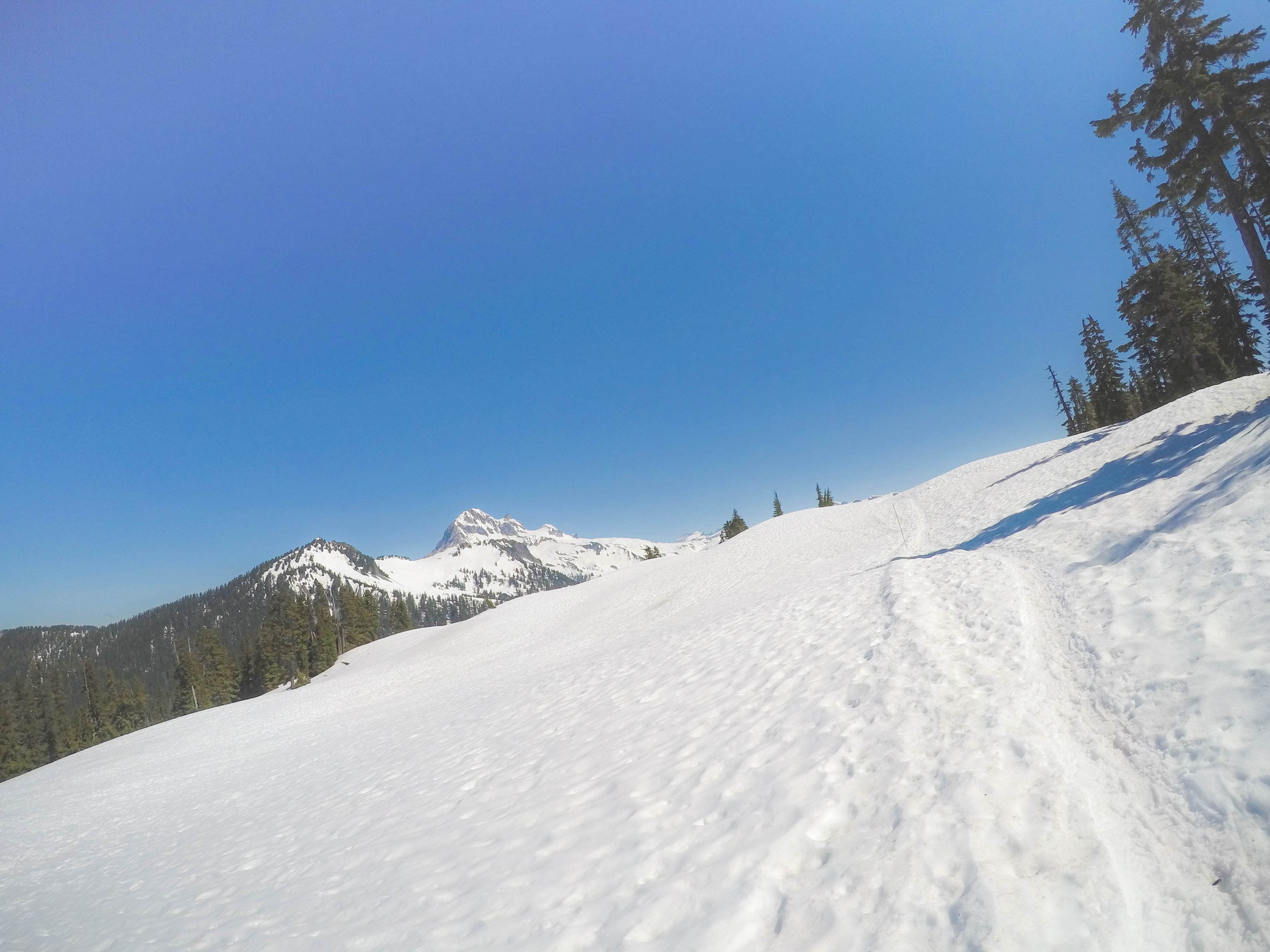 From Red Heather Hut the rest of the Elfin Lake trail gets much steeper. This is the part that people without snowshoes were mostly turning around at. The winter route is slightly different to the summer route so as to avoid avalanche areas.

You’ll hike pretty steeply up a slope before switching back towards the left and going around the back of another slope. This section had some parts which were awkward in snowshoes. The snow had melted by some tree branches meaning we had to step carefully over them, trying not to get our snowshoes caught, nor fall off the narrow path.

After an hour or so going around the back of the slope, you’ll come out at the highest elevation point and get amazing views of the mountains. From here it’s pretty much all downhill! And better still, the clouds had parted revealing the most incredible mountain views just in time for sunset.

The lakes were just beginning to thaw out and so there was a super cool, icy blue ring around the outside. It’d be cool to go back in summer and see what they look like then too! We arrived at Elfin Lakes roughly 4 hours after we set off (in the summer it’ll probably be a quicker hike!). First things first was to look for where to camp for the night. I’d thought there’d be a designated area for tent campers and there is, but only in the summer. At the end of May, the Elfin Lakes area was still too snowy and therefore the tent pads were buried under several metres of snow.

The advantage of this was that we could pretty much camp anywhere. A few other people had already set up their tents by the smaller of the two lakes which is reserved for drinking water. Putting our tent here meant that through one door we had a great view of the lakes and the Park Ranger’s shelter and then on the other side we had beautiful mountain views.

We’d camped on snow about a month earlier when we hiked up and camped near Mt Seymour. That had been a very cold night and so we weren’t thrilled about camping on snow again. We’d read that using an emergency shelter as an extra sleeping layer could help reflect warmth back and since I was carrying my 10 essentials we had one with us! We placed this on the bottom of our tent and crossed our fingers.

Dinner was some ramen which fresh veg and eggs boiled at home while watching the sunset over the lakes and distant mountains. 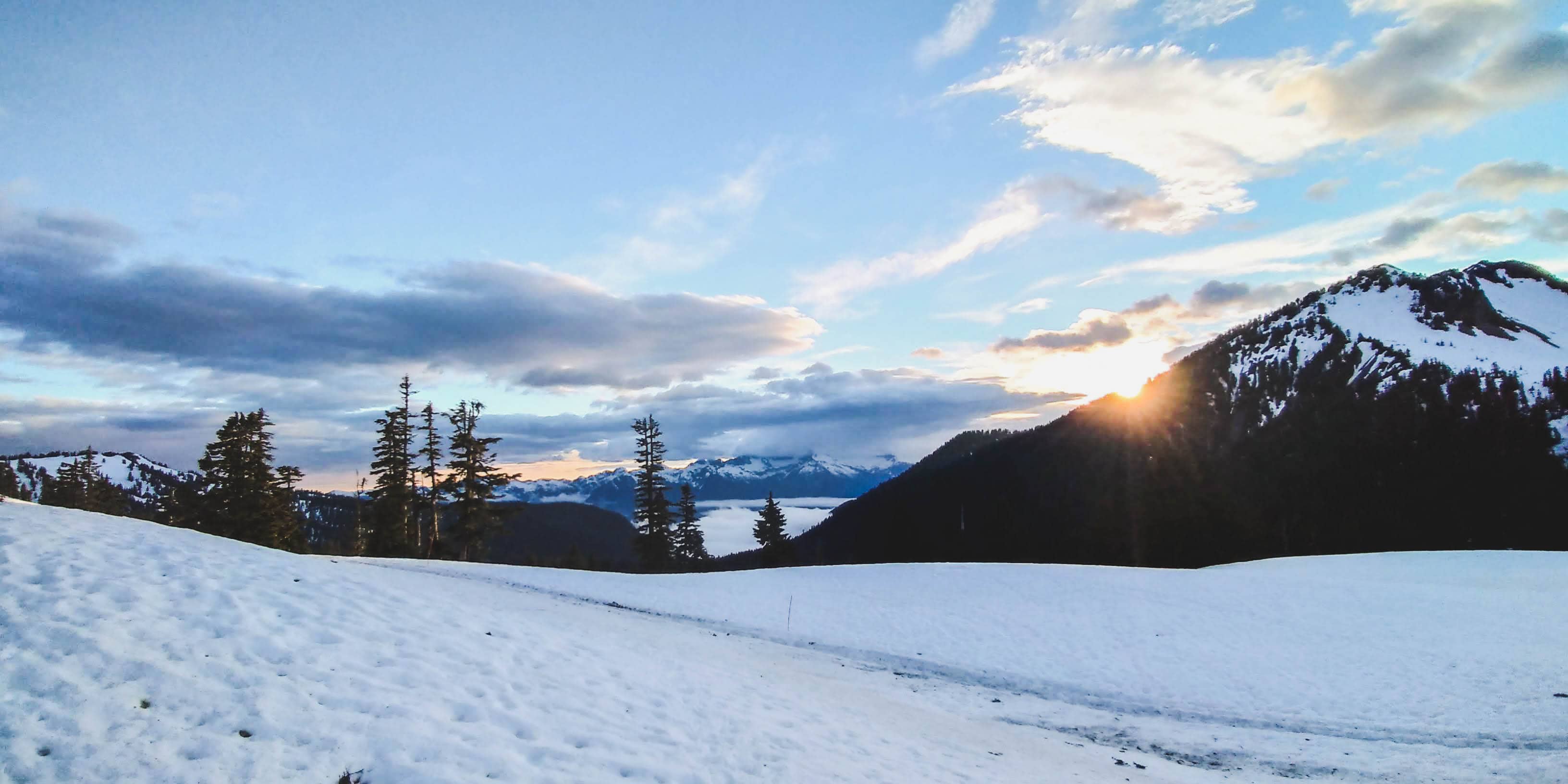 There were some bear hangs near the day-use shelter at the lakes but since the snow was so deep they were pretty much useless and the chances were that the bears were at a much lower elevation anyway. However, we did store our food inside the hut rather than our tent just in case. 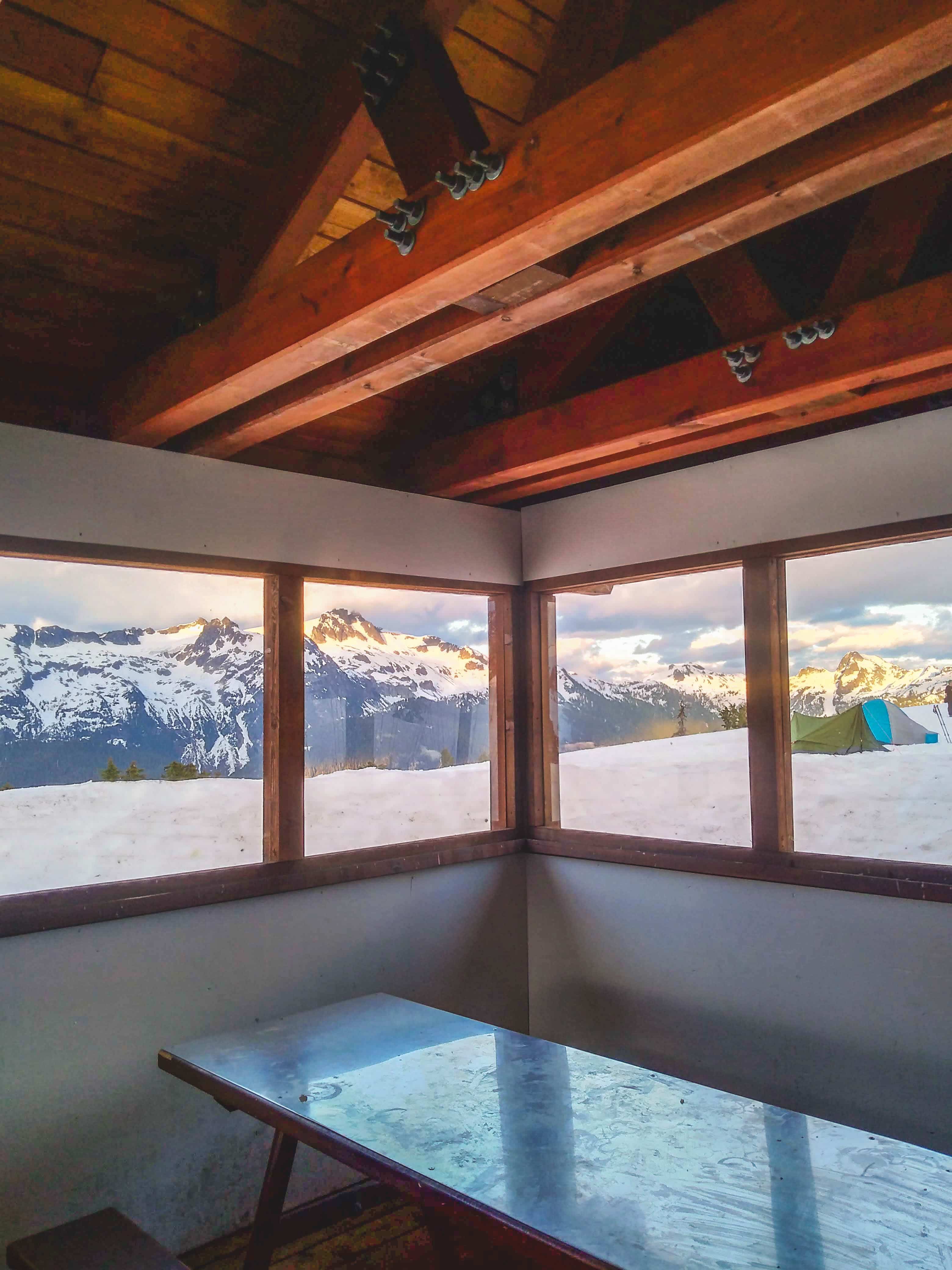 Overnight we both ended up getting too hot which was a pleasant change from the previous time. The air temperature was also warmer than it had been up Mt Seymour but I like to think the emergency shelter base helped a bit too.

I’m an early bird and woke at sunrise. I couldn’t resist taking a peek outside the tent and I’m so glad I did. There was no one else up, all was quiet by the Elfin Lakes cabin, and the sunrise was just coming over the mountains. It was beautiful. 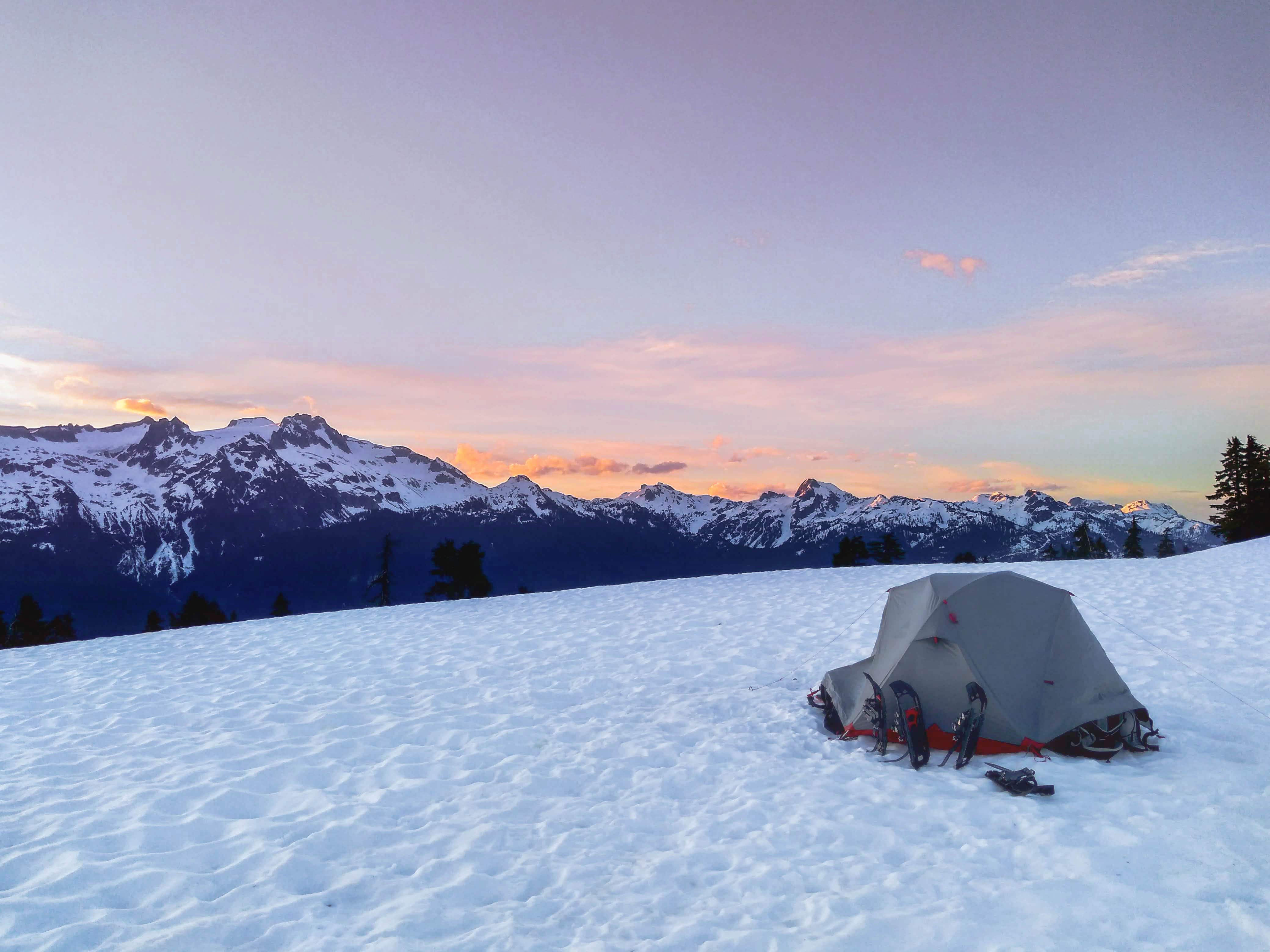 The hike back was much more enjoyable than the day before since we could actually see the views now. We hiked back to the van in just under 3 hours with a big smile on my face from those views and time spent in the mountains!

What to pack for an Elfin Lakes overnight trip