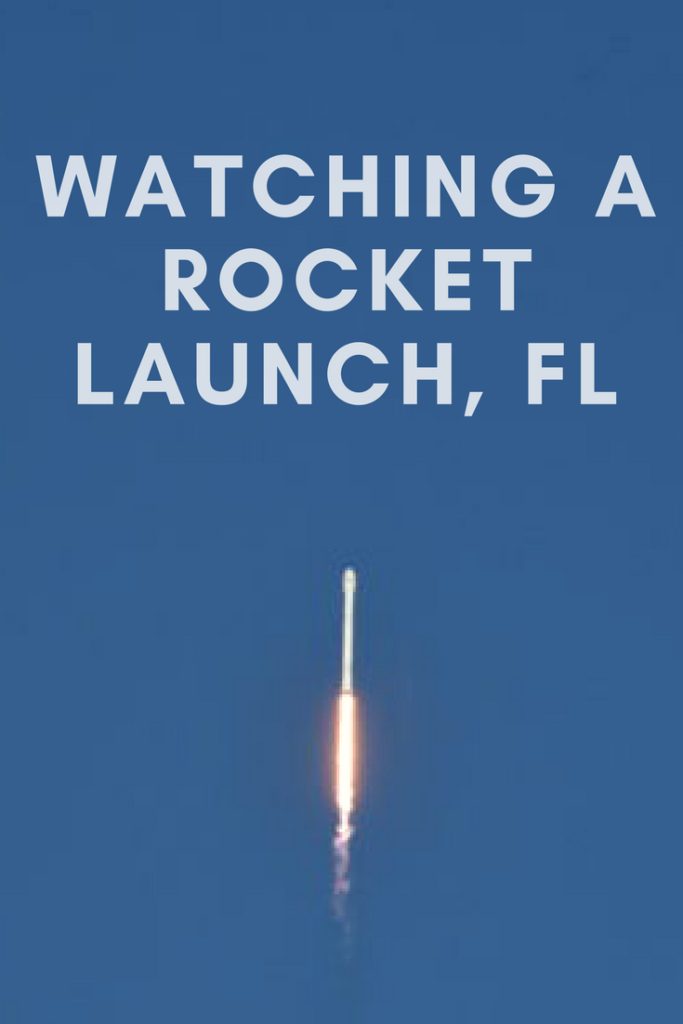 When Thom saw there was a rocket launch at the Kennedy Space Centre scheduled for March, it was decided that we’d aim to make it to one.

You can get your Kennedy Space Center visitor complex ticket here.

Rocket launches are delayed and rescheduled quite a lot due to all sorts of factors. It could be because of technical difficulties, weather restraints or something else entirely. The rocket launch we eventually attended had been rescheduled too but it worked in our favour.

Having whizzed round the rest of Florida, we were up near the Kennedy Space Centre on the correct day for a rocket launch. Watching a rocket, any rocket, launch into space is a pretty exciting prospect but the fact that we were to see an historical rocket launch was even more exciting.

The launch was being done by SpaceX (founded by Elon Musk behind PayPal and Tesla). And, if the rocket launch was successful, it would be the first time EVER that a rocket have been reused.

This rocket, the Falcon 9, had already been launched and landed in one piece (a first in the space industry). This second launch was hoping to send a satellite into space from The Kennedy Space Centre and land it (again) on a drone ship some 400 miles off the coast in the middle of the Atlantic.

Before the launch (scheduled between 6:20 – 8:40pm) we had a look around The Kennedy Space Centre. Admission is $50 per adult which I feel is overpriced.There’s a “rocket garden” with a few old rockets, some memorials for astronauts, the chance to see the Space Shuttle ‘Atlantis’ and an IMAX cinema too.

It’s a cool place to look around while you’re in Florida but I don’t feel you get that much for your money compared to other places. But hey, space travel is expensive and they’ve got to make their money somewhere…

The admission also comes with a bus tour which passes the launch pads (from a distance). However, be warned that if there is a rocket launch scheduled for the day of your visit the bus tour won’t run or will have reduced hours.

After wandering around the visitors’ centre, we boarded the buses to Banana Creek where we’d be watching the rocket launch. To watch a rocket launch from here costs an extra $20 (for this launch anyway) on top of the admission price but it’s the closest you can get and the views are pretty good. You can also watch from the main visitors’ complex (included in the admission price) where you’ll be sat on stands and watch on a TV.

Whilst we waited for the launch slot the staff at told us a bit more about what to expect and answered many, many questions from an excited crowd.

The SpaceX team had a 2.5 hour window to launch the Flacon 9 rocket. If they tried once at 6.20 and failed, they then had time to try again and hopefully get it off the ground towards the end of their window. This varies for each launch, some rockets only have a window of a couple of seconds to launch!

As 6.20 approached, everyone’s eyes were glued to the opposite side of the river where the launch pad was. We could see steam coming off the rocket as the team worked to keep the fuel cool.

Then, before we knew it, a ball of flames appeared at the bottom of the rocket and we had lift off!

The rocket was already pretty far up in the sky before we heard the boom making its way across the river towards us. A noise so loud that it made your heart feel as though it was vibrating.

The successful second launch of the Falcon 9 rocket made history, but now it was time to see if the Space X team could also successfully land the rocket for a second time.

The viewing area was hooked up to Mission Control in Houston, Texas, so we could hear the excitement of the team (imagine working on that team and making history like that!). We found the live stream online so we could see if the rocket would succeed in landing on the ship for ourselves.

The camera on the ship cut off, then it came back on revealing the rocket standing upright, right where it was supposed to be!

Check out my youtube video from the evening to see the launch yourself!