Before our three-month road trip of the USA, I had many a preconceived idea of Texas. Turns out you can’t judge a state by what you hear on the other side of the Atlantic. The city of Austin was one of our favourite cities during the trip and there were so many unique things to do in Austin, Texas.

Besides being a liberal, progressive city Austin was full of hippy vibes, great food, coffee, and ultimately, there were plenty of downright weird things to do in Austin too. Perhaps that’s no surprise given Austinites give their city the motto of “Keep Austin Weird”.

But honestly, that’s one of the reasons I, and many others, love Austin. 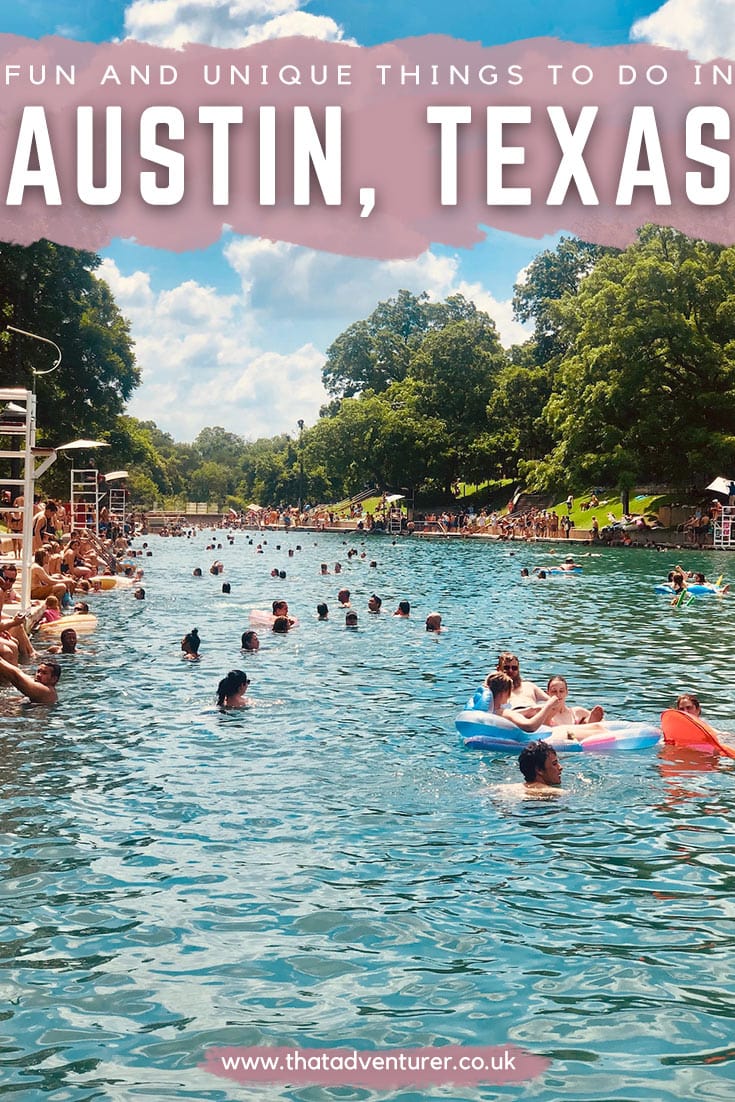 Fun and unique things to do in Austin 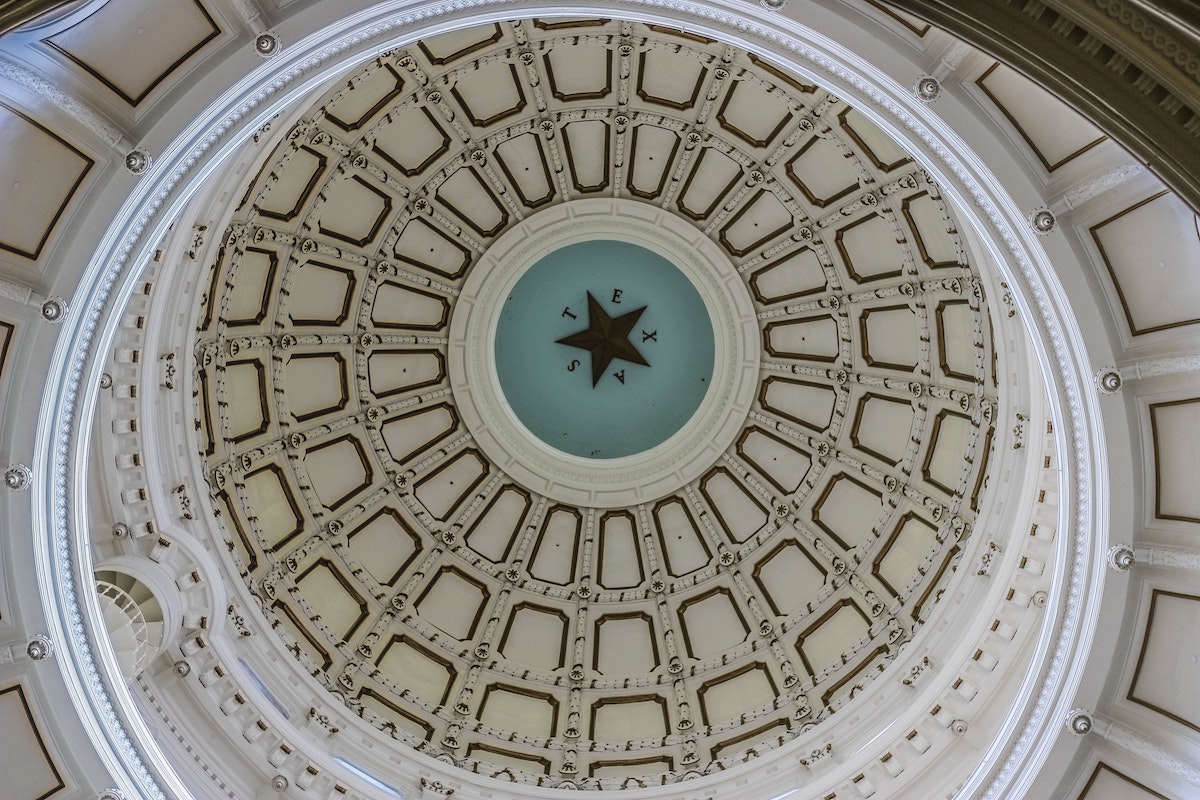 You might not think visiting the State Capitol in Austin sounds that fun but just bear with me. Maybe it’s because I’m a foreigner, but I’m sure everyone would learn something on this free tour of the Capitol in Austin. Like did you know that Texas used to be part of Mexico? You wouldn’t think that based on today’s rhetoric…

As the capital of Texas, Austin is home to the State Capitol. It’s an impressive building to take a look at and it’s free to enter too.

The State Capitol also run free tours every half hour where you’ll be guided around the building and learn about the history of both Texas as a state and certain governors.

I’m pitching it as one of the best free things to do in downtown Austin.

UPDATE: The original area is closed down but it’s reopening by Austin Airport in 2020. Keep an eye here for more details.

Just on the edge of downtown Austin is the HOPE Outdoor Gallery, also known as the Baylor Street Art Wall. This area of Austin was started by the HOPE Campaign as a way to give local artists a creative outlet. It’s turned into an outdoor gallery and is a great place for visitors and locals alike to come and leave their mark with a can of spray paint.

It also makes for some great photos if you’re looking for Austin photography spots since it’s so colourful.

Roam the Cathedral of Junk 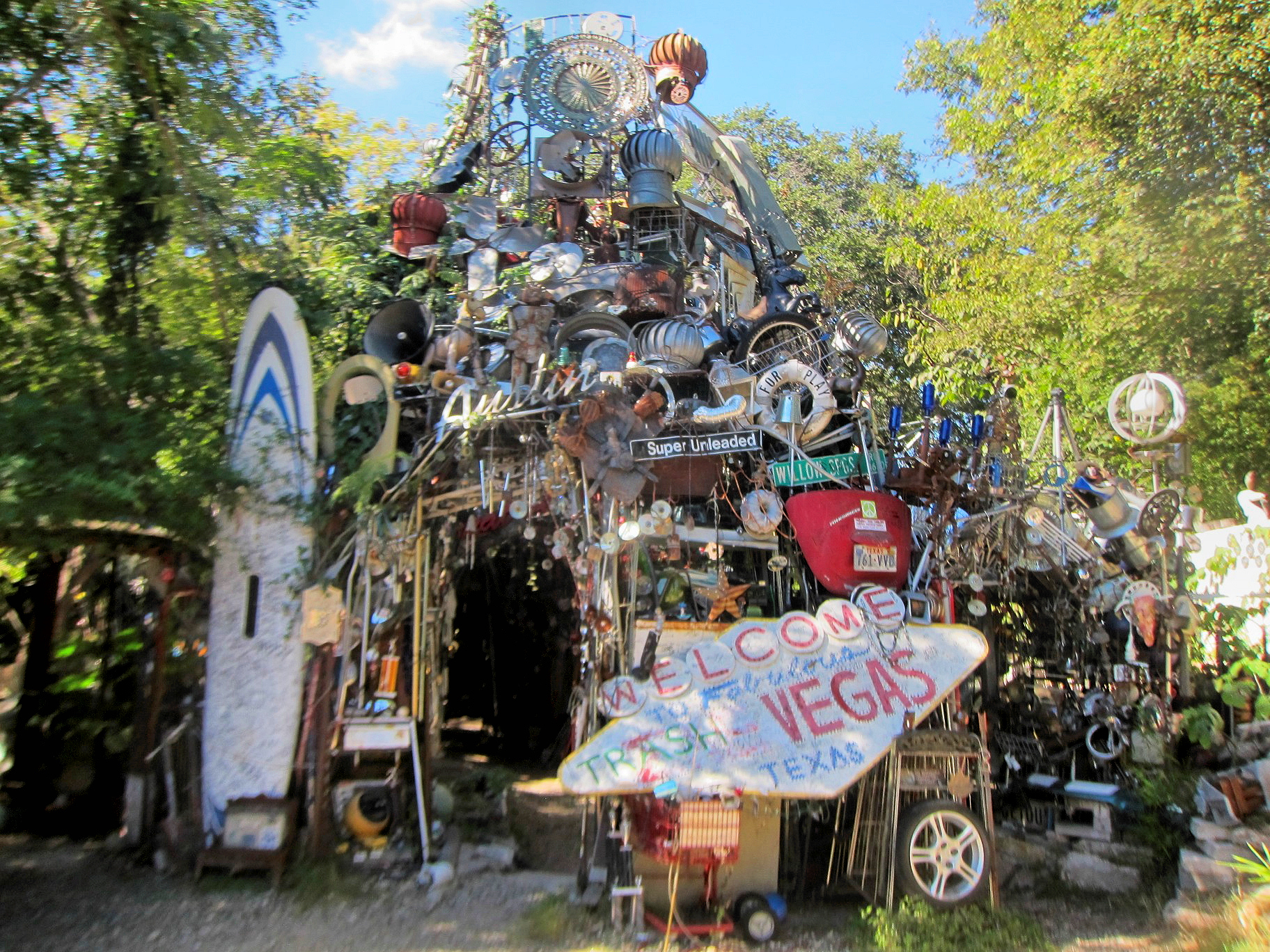 A trip to The Cathedral of Junk is another of the cool things to do in Austin. Vince Hannemann started the shrine to all things junk because he thought it’d be cool and I think I’d agree. Sure, living next to it may not be so fun, but going to visit it? Yeah, that’s fun.

To visit the Cathedral of Junk you have to call Vince and make an appointment (Cathedral of Junk bookings: 512-299-7413). He gets pretty booked so call in advance of your trip. It’s donation only, but the suggested donation is $10.

South Congress Avenue is one of the coolest places in Austin and is home to many weird and unique stores in Austin. In fact, whether you’re a first time visitor to the city, or have been many times, you’ll find plenty to entertain you in this neighbourhood.

Our favourite stops along here were; Uncommon Objects, a shop selling all sorts of antiques and oddities, home for the type of objects you’d find in your Grandparents’ attics but they somehow manage to look cool here; South Congress books, specialised in Texas and Austin based books; and Parts and Labour which has some awesome prints in and Austin slogan T-shirts.

One of the top Austin attractions is Zilker Park. If you’re visiting Austin in summer you’re sure to visit Zilker Park to relax with a picnic.

While you’re there be sure to find the Woodland Faerie Trail in Zilker Botanical Garden! It’s a trail that takes you past tiny faerie and gnome villages, every one of which is a bit different. It’s great if you’re looking for what to do with kids in Austin, but we loved it too.

Check out the neon art at Roadhouse Relics

At Roadhouse Relics you can find the most unique art gallery in Austin. Todd Sanders owns Roadhouse Relics which is full of huge, Americana inspired neon signs. If you fall in love with one you can buy one too. If you’re nearby it’s definitely worth stopping by!

Strip off at Hippie Hollow Park

Hippie Hollow Park is the only clothing-optional public park in the entire state of Texas. It’s been a popular place to hang out in Austin since the 1960s and it’s just as popular today.

Watch a movie at the Alamo Drafthouse

The Alamo Drafthouse in Austin is the place to watch a film. We watched Trainspotting 2 here and loved the atmosphere. You can get dinner and drinks delivered to your seat so it’s even better than movie night at home.

Listen to live music at Hole in the Wall in Austin

Wondering where to go out in Austin? Check out this dive bar which is hella fun and tops lots of lists of fun things to do in Austin at night.

The walls are covered in graffiti but that’s all part of what’s so great about it. There are two bars inside, with the front one usually showing country acts and the back bar for the rock bands. It’s one of the best things to do in Austin at night.

4th Tap Brewing is known for its Party World Rasslin’ which brings body slams, laughs, and beer to North Austin. You can see when the next wrestling event is here – it’s sure to be fun!

Whether it’s Christmas or not, it’ll feel like it at Lala’s. This Christmas themed bar has plastic elves, twinkling lights and more. It’s a strange bar that’s for sure, but this cash-only establishment is home to one of the best Bloody Marys in the city. 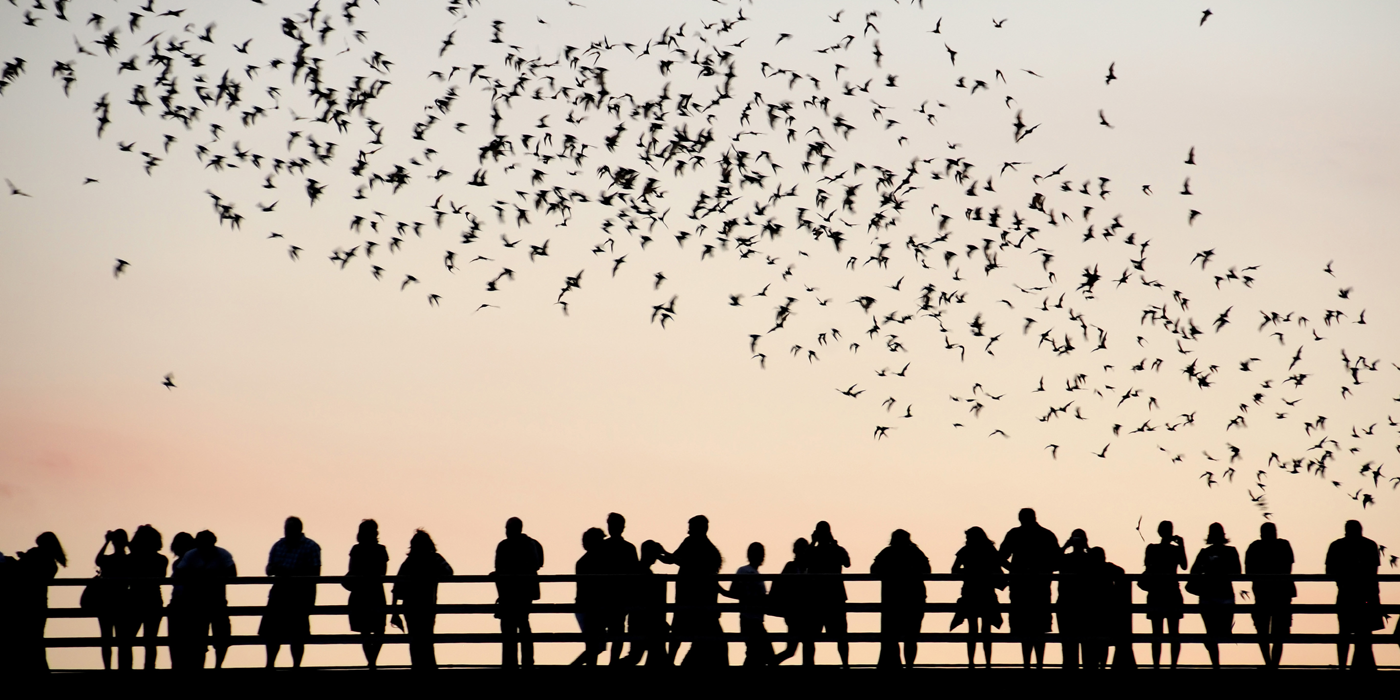 As dusk falls hundreds upon hundreds of bats come out to gobble up all the mosquitoes. It’s a pretty spectacular sight and a lot of people turn out each night to see it.

The University of Austin

The University of Austin also has some beautiful buildings and is just north of the State Capitol. While we were there you couldn’t walk around everywhere without showing a suitable university ID (perhaps that was because it’s term time, I’m not sure), but even driving past is worthwhile.

You should, however, be able to climb the University Tower which gives you great views out over Austin.

The first Whole Foods Market was in Austin and it opened up in 1980! This store is absolutely huge and if you’ve only visited Whole Foods in London then make sure you also visit in America – they’re SO much better.

The lunch options alone blew me away. They’ve got make your own ramen, tacos, so many hot, cold and salad options, sushi, BBQ, made to order sandwiches, tonnes of coffee which is freshly roasted and so much more. I could’ve spent hours browsing the shelves (and blown all my travelling money in one shop!).

The Drag is the nickname given to the part of Guadalupe street in Austin that runs adjacent to the university. For this reason, you’ll find it’s particularly busy with students.

The street is full of budget-friendly eats including ‘Which Wich’ (a better version of Subway) and several food trucks serving all sorts of cuisines.

It’s also home to the University Co-op. The University Co-op is an absolutely massive shop that’s full of pretty much any item you can think of with the Texas Longhorns’ (the name of the university’s sports teams) logo on it. Honestly, I mean anything. Bottle openers to towels and even Nike clothing with the logo on! I can’t imagine any university in the UK having quite as many branded items – even Oxford and Cambridge!

You can’t go to Austin and not eat from a food truck, it’s one of the things you have to do in Austin. What do you want? Colombian? Brazilian? Tacos? Burgers? Pizza? Doughnuts bigger than your head? You name it, there’s a truck that does it.

Check out my pick of the best Austin food trucks.

Splash around at Barton Springs 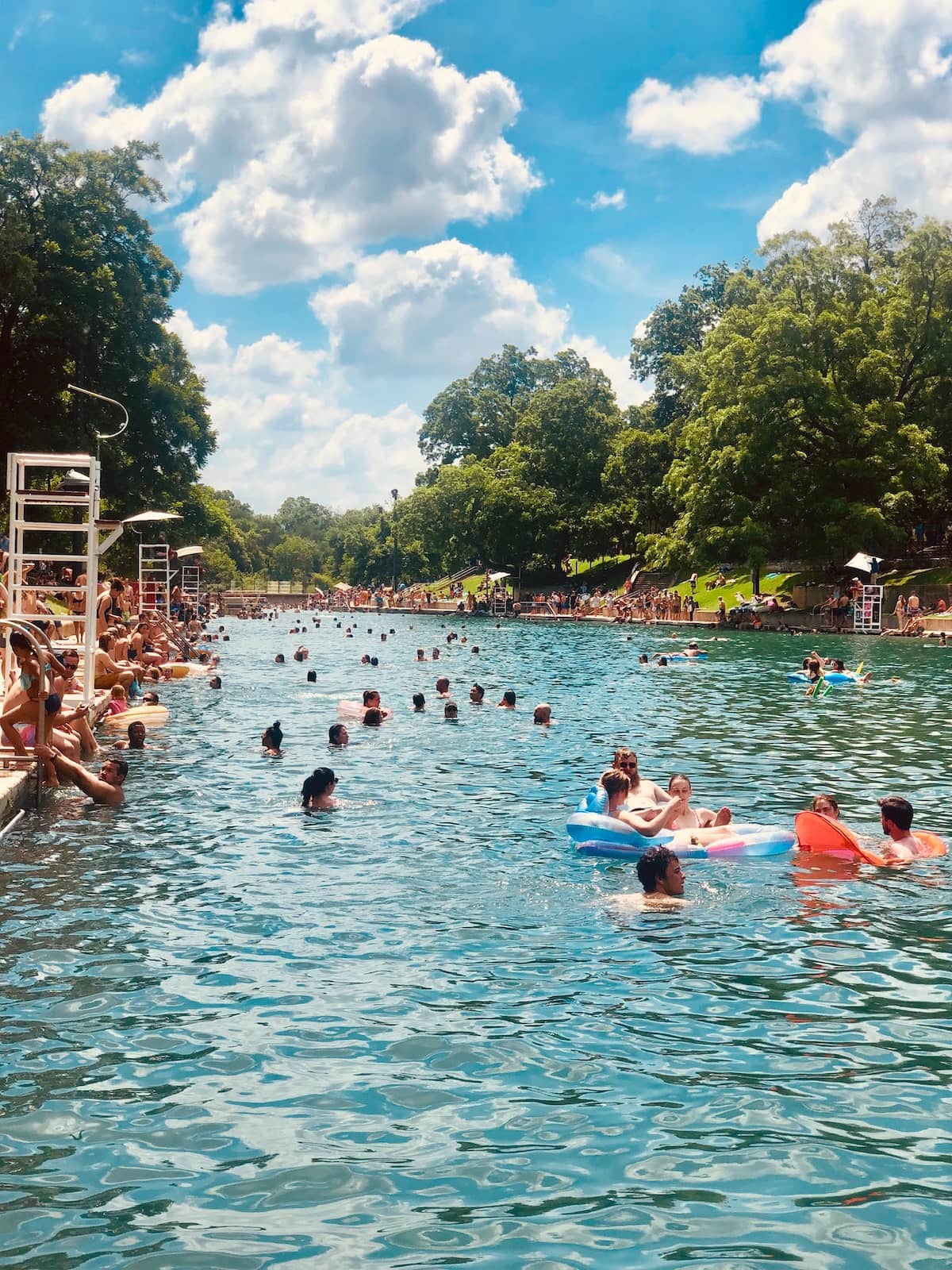 A must do in Austin, especially in the summer, is a swim at Barton Springs. Barton Springs is a natural spring for swimming, kayaking and sunbathing near. The springs are in Zilker Park (where the faeries are) and there are two options for swimming. There’s the one you have to pay for which has a nice grassy hill, then the second which is free but the lounging area isn’t always as nice.

Some of the best Austin attractions are the BBQ houses and the hardest part is picking which one to go to. There’s Franklin BBQ, on the east side which is always super busy. Be there before the 11 am opening and wait in line. It closes as soon as the food is gone which doesn’t take that long.

Green Mesquite is another great option close to Barton Springs.

Head to Ginny’s Little Longhorn Saloon for a round of Chicken Shit Bingo (yes, really)

Chicken Shit Bingo is a real thing, and it’s a whole lotta fun. I mean, where else can you say you’ve played this game?! This has to be one of the coolest things to do in Austin (if not one of the weirdest too!).

Museum Of The Weird

Interested in weird or supernatural things? Then The Museum of the Weird needs to be on your list of things to do in Austin.

Entrance costs $12 which gets you access to props used in horror movies, pirate skeletons, odd objects in glass boxes and even a King Kong replica.

Get a sugar hit at Big Top Candy Shop

If you’re looking for a sugar hit in Austin, head to Big Top Candy Shop. This sweet shop is circus themed and also sells ice cream and floats. It’s a great idea for things to do in Austin with kids (and big kids!) as there are some super unique things in this Austin store.

I mean this isn’t a dinner stop, but it’s one of the most unique places to eat in Austin that’s for sure. 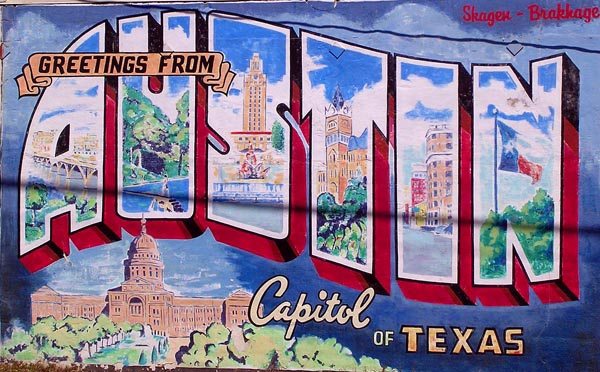 There is lots of street art in Austin and while some of it involves travelling around the city, there are quite a few murals in downtown Austin too. Some of the best are listed below:

Where to stay in Austin, Texas 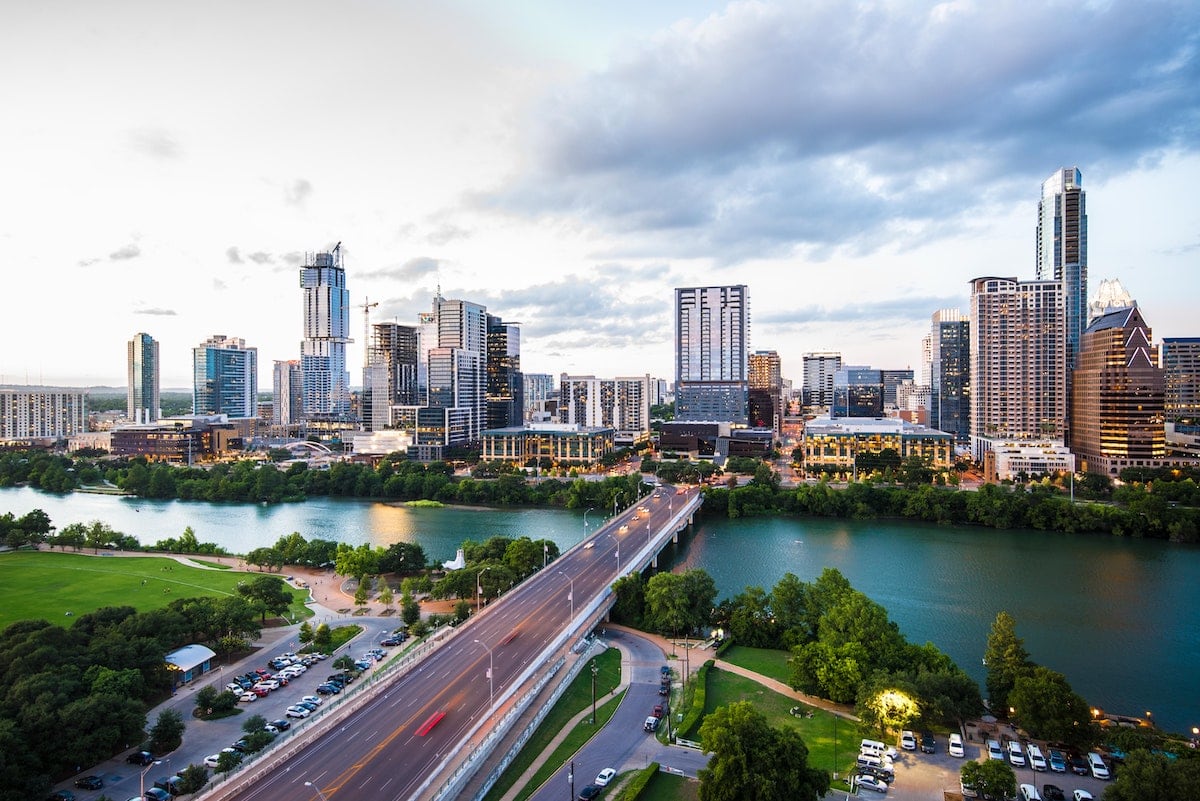 Looking for an Austin hotel? Here’s my pick of some of the best places to stay in downtown Austin and the surrounding neighbourhoods. These hotels cover a range of budgets so if you’re a budget traveller you should find something suitable listed below.