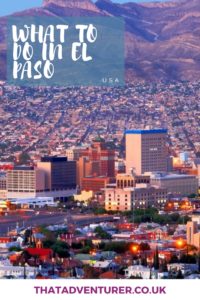 Sitting on the border (quite literally) of America and Mexico is El Paso. When we finally (read here to see what happened made it when we tried to get to El Paso & through border controls without our passports…) made it to El Paso we decided to stick around and check out the city a while. After all, a city on a border that appears in the news almost every week is sure to have some interesting stories!

We really wanted to see the Mexico-USA border especially given all the talk about Trump and his Wall.

Honestly, the way you read people talking about it you’d think there were Mexicans jumping fences left right and centre. And no. They’re not at all.

The border already seems pretty secure and, whilst I’m have limited knowledge of everything that goes on, I think a lot of the press is overhyped (as you may expect).

Still, it was pretty cool to see one of the official gates of such a talked about border. And no, unfortunately we didn’t go to Mexico on this trip (we were worried about being let back in!). Don’t be put off by the fact that the border museum a) looks a bit shabby from the outside and b) is free (in the US you have to pay for a lot of the best museums not like the free ones in London, usually I’d be LOVING anything free!).  The Border Museum in El Paso is actually great!

Before we went in, I said to Thom that what would make it really interesting would be if they had stories from people who’d illegally crossed the border. And guess what? They did!

We browsed the museum for about an hour. It’s full of the history of the US border force, has stories of how some people have tried to cross the border and even includes some of the methods of transport they used. You should definitely visit this free museum if you’re in El Paso!

A little way outside of El Paso is White Sands National Monument. A man in a Home Depot carpark in Houston had told us we should stop off here as it was one of his favourite places.

It’s basically a huge expanse of white sand dunes in the middle of nowhere. Even on the drive up towards the entrance you can’t quite tell there’s white sand dunes. Then, all of a sudden they appear!

It gets extremely hot in White Sands National Monument so make sure you top up your water bottles before you leave the visitor centre.

One of the main tourist attractions in El Paso is the Wyler Aerial Tramway up to Franklin Mountains State Park.

You get a pretty good view of El Paso and out over the border to Mexico once you’re at the top and it’s well worth the $8 fee to go up on the tramway.

Do be aware that it gets exceedingly busy and closes often when it gets a bit windy. We went at about 10/11am and managed to go up without much of a queue. We then hiked back down the mountain (see below) and found they’d closed the tramway because it was too busy at the top.

…and then hike down

(Or you could do it the other way too!)

We decided we’d hike down the mountain once we’d got to the top. To do so you have to let the staff in the visitor centre know that you’re about to hike. They’ll want your number, car registration and names so they know how to contact you if you don’t report having finished the hike to the staff at the bottom.

Honestly I think that safety measure was a little over the top. It is steep in places but I wouldn’t say it’s particularly strenuous. Especially when compared to the hikes in some of America’s National Parks where there aren’t any safety measures like this.

Check out my video above to see what the hike was like.

Drive the scenic drive up to the overlook 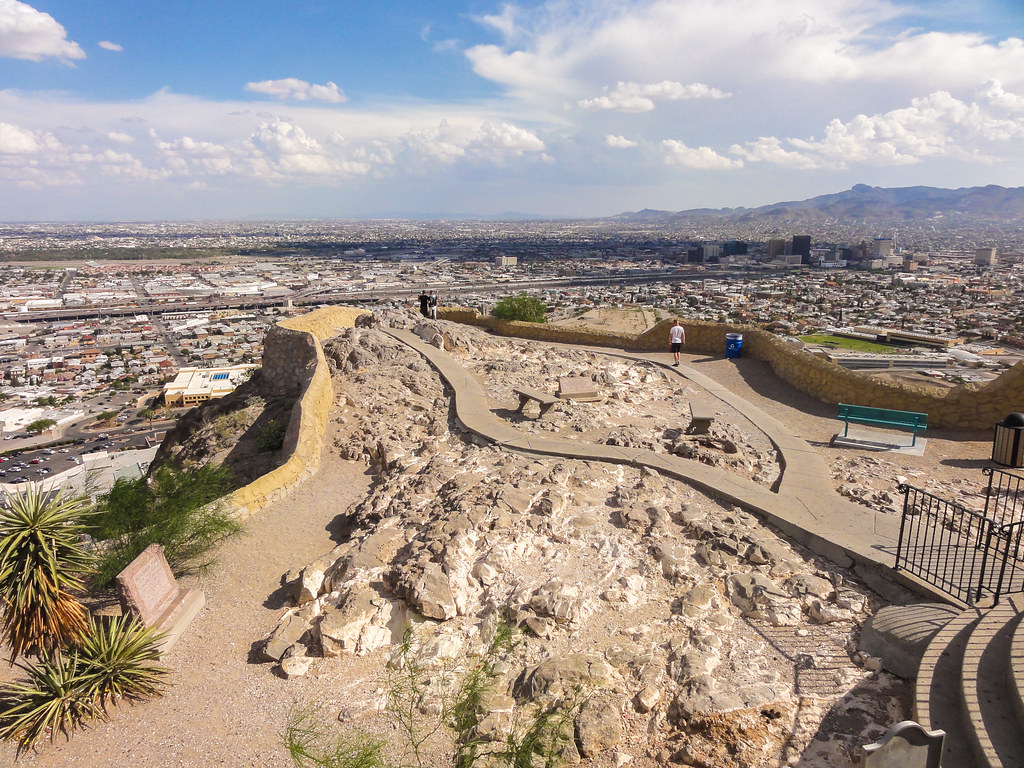 El Paso’s scenic drive is definitely deserving of that name. If winds up into the mountains that look down on El Paso and gives you fantastic views.

I found it very interesting to not the differences between the housing on the US side to the Mexican side. Mexico was a hell of a lot more colourful (but also smaller and a bit more rough around the edges) than the American side.

The highlight of the scenic drive is the small park right at the top.

Mammoths Trunk is a trail through one of the taller mountains looking down on to El Paso. It’s a 3 mile round trip which takes about 2 hours out to a great view point.

But, if you don’t fancy hiking it then head up to the parking lot for Mammoths Trunk trail at night. Up here the night lights look pretty spectacular.

We’d planned to stay in the van up here over night but some teens turned up and made a lot of noise so we moved on to our beloved Walmart for a free night’s sleep.