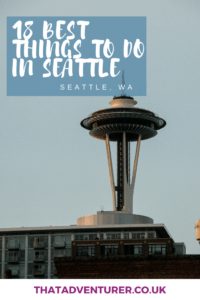 There’s just something about the Pacific Northwest (that’s the PNW!). As soon as we headed north out of San Francisco and reached the northern Californian coast, everything felt different. The whole place was more relaxed, more leafy (and yes, a little wetter).

If Portland was one of my favourite cities of our whole three month USA road trip, then Seattle was definitely up there too.

I asked for some recommendations on things to do in Seattle over on instagram and got some great tips! I added them all to a list in Google maps (you can get the list here). If you’re planning a trip to Seattle here are some of the best things we did in Seattle.

And hey, since Vancouver is only three hours away I’m sure we’ll be back some time. Besides, I’m really missing browsing the aisles of Trader Joe’s. 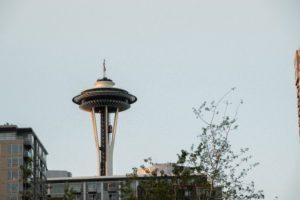 Toronto has the CN Tower, London has Big Ben and Seattle has the Space Needle.

You can’t visit Seattle and not see the Space Needle. No really, you can’t actually miss it.

Head up the Columbia Centre 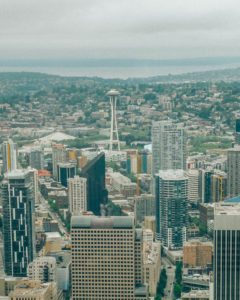 Instead of the Space Needle we headed on up to the top of the Columbia Centre thanks to a recommendation via instagram.

The Columbia Centre has its very own Sky View Observatory which costs less than the Space Needle and gives you a chance to see the Space Needle itself. Personally I think that’s a better option than going up the Space Needle. It’s also why we went up to The Top of The Rock in New York rather than The Empire State. 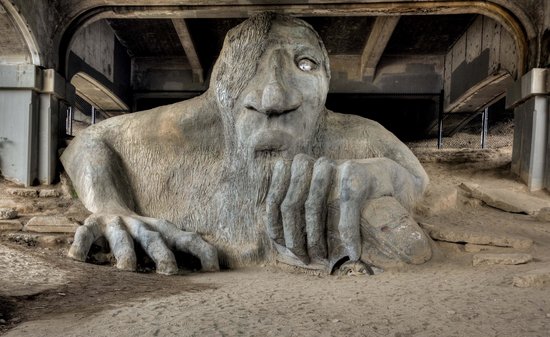 Remember the book ‘Three Billy Goats Gruff’? If you don’t then basically three goats cross over a bridge and come across a troll. The Fremont Troll in Seattle also happens to be under a bridge but fortunately this one can’t say anything to you.

The Fremont Troll was created by four artists as part of a sculpture competition in 1990. It’s a huge sculpture and, if you dare, you can climb to the top of the troll.

We really liked this park in Seattle. Not only does the park offer great views of Seattle, but there are some pretty interesting things to look at in the park itself.

As the name suggests, the park used to be an old Gas Works. There’s still plenty of the old infrastructure and some has been repurposed to make a playground too. When we visited it was full of people playing football (soccer), and picnic-ing!

I reluctantly climbed the Water Tower in Seattles Volunteer Park after a day of walking around Seattle with Thom. I’m glad we did though! There aren’t too many steps (107) but since the tower is on top of Capitol Hill you’ll be 520ft high.

Once you’ve reached the top of the Water Tower (which is free by the way), you get 360 degree views of Seattle. You can also see the Space Needle which is just 205ft higher than this water tower. It’s worth doing if you find yourself in the area.

The Chihuly Garden and Glass 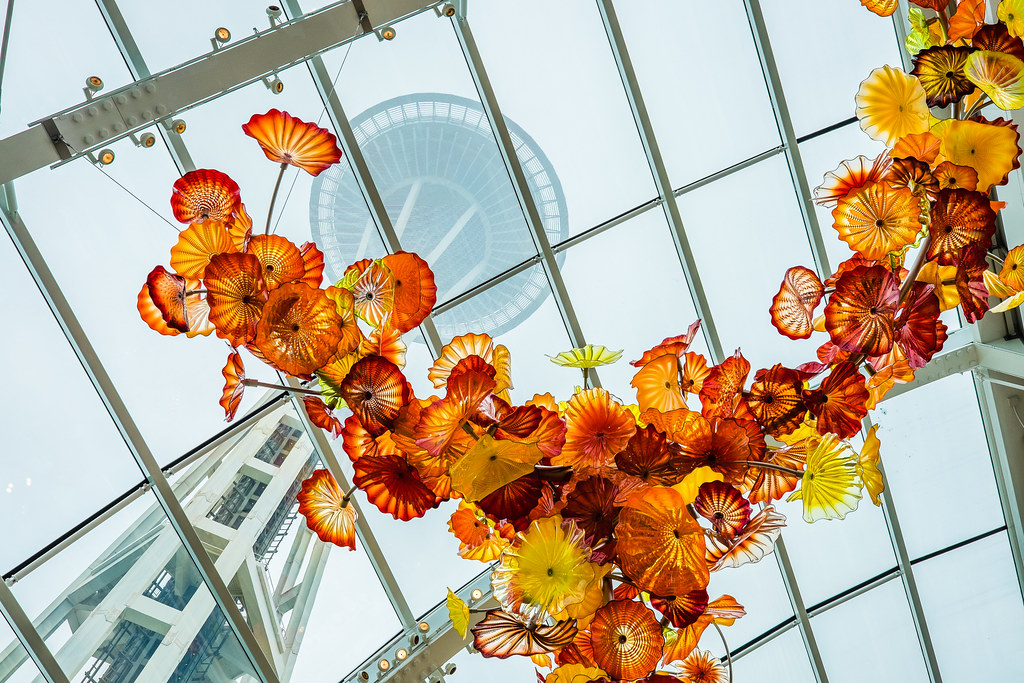 We didn’t actually go into Chihuly Garden and Glass but the sculptures we saw from the outside and in the gift shop were very impressive.

The museum features the work of Dale Chihuly and is housed in a 40ft tall glass and steel Glasshouse. There centrepiece of the collection is the 100ft long sculpture of red, orange, yellow and amber glass.

The first ever Starbucks 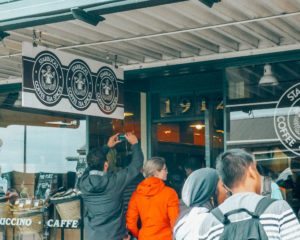 Did you know Starbucks started in Seattle? Well it did and you can visit the very first one (if you don’t mind waiting a while for you coffee…). 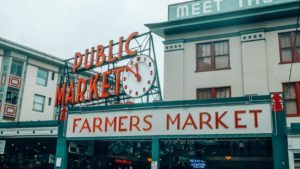 Pike Place Market is a must for every visitor to Seattle. Besides the food there are beautiful bouquets of flowers, art there’s just a good buzz too! The first ever Starbucks is just across from the main part of Pike Place Market so it’s worth combining the two.

Say ‘ew’ to the Gum Wall 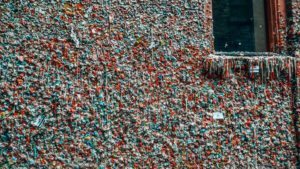 Another thing to do in Seattle is the Gum Wall. I’m warning you that it’s both disgusting and mesmerising at the same time.

It’s exactly what it sounds like: a wall covered in gum. It’s pretty colourful and makes for an interesting photo. Plus, if you fancy you can add your own, freshly chewed gum to the wall and leave a piece of yourself in Seattle. 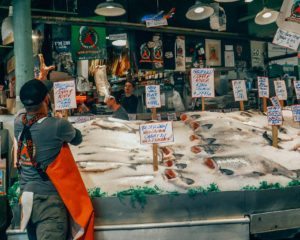 While you’re at Pike Place Market make sure you stop long enough at the Pike Place Fish Market to watch some fish throwing action go down.

Whenever someone buys a fish the fish is thrown between staff members it’s definitely something I’ve not seen done at other markets!

Get a doughnut at Top Pot Doughnuts Top Pot Doughnuts were recommended by Jaime from Angloyankophile. They were so good and definitely worth stopping in at for some coffee and a doughnut!

Grab a drink at Unicorn

Unicorn, in Seattle’s Capitol Hill, is a carnival themed bar with an arcade & photo booth and very different decoration. They serve corn dogs and burgers and plenty of fun drinks too. It’s a fun place to grab a few drinks in the evening! 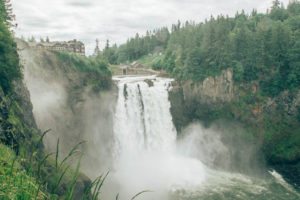 Just outside of Seattle are Snoqualmie Falls. They’re 268ft high and there’s a beautiful looking hotel, Salish Lodge, perched pretty much on the top of the falls.

There are a few viewing areas at the top of the falls and you can also walk down towards the bottom of the falls for a different point of view.

We’d made it the whole way around the USA without eating a massive pizza pie. We decided to put that right in Seattle and visited Windy City Pie.

If you’ve ever wondered why it’s called pizza pie then you’ll wonder no more when you see the sheer size of the thing!

Windy City Pie is in Batch 206 distillery so after you’ve pizza’d (or during) you can taste some local spirits.

Catch the ferry to Bainbridge Island

If you’re in Seattle for more than a weekend make time to get a ferry over to one of the islands. Bainbridge Island is a good option and it’s a great place for an afternoon stroll. While you’re over there make sure to grab some ice cream (see below). 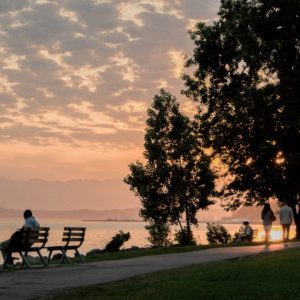 We arrived in Seattle early evening and headed straight for the waterfront. We walked along Myrtle Edwards Park and saw one of the most beautiful sunsets from our entire trip. I’m sure there are plenty of good spots in Seattle for a sunset view but Myrtle Edwards Park definitely has to be up there with the best!

Mora Iced Creamery on Bainbridge Island was an instagram recommendation and it was very tasty! They had loads of unique flavours and piled the ice cream up high into the cones!

Discovery Park is a huge park: 543 acres! It’s on the shores of Puget Sound and it’s Seattle’s largest public park. There are more than 11 miles of walking trails here. I’d recommend taking the trails out towards West Point Lighthouse.

The Lighthouse itself is all fenced off but you can chill out on the rocks and take in the views. We saw a few seals dipping in and out of the water when we were there which was awesome!